If you’re looking to kick back and relax with your toes in the sand, or have some fun in the sun, Orlando might not be the first place that comes to mind since it is in central Florida and not on the coast. As it turns out, however, there’s no shortage of beaches just a short drive from Orlando. You could head to a city right on the coast and stay just minutes from the beach, but then you’ll be missing out on the dozens of theme parks, water parks, animal sanctuaries, and golf courses that can only be found in Orlando. Why not take advantage of the hundreds of entertaining venues found only in Orlando, and when you are ready to have some fun in the sun, you can hit one of these beaches with just a quick drive.

Orlando is located in central Florida, making it a prime location for anyone that wants a middle ground between several pristine beaches. Orlando is a short drive southwest of Daytona, and a short drive northeast of Tampa. Another way to look at it is that Orlando is roughly 40 miles from the east coast, and 90 miles from the west coast. Of course, the actual distance depends on where you are heading and the route you take, but that will give you a general idea of where Orlando is compared to the coast.

While there is hardly a bad time to visit Orlando, March, April, and May are arguably the best months to visit. During these months, the weather is warm but moderate, and the cost of travel is not terribly overwhelming. Travelers will find a warm welcome and plenty of fun all year round, but these months are your best bet for mild weather and easy travel.

If you travel during certain months, like March-April, you will find the weather quite mild and pleasant. In those months the temperature generally stays between the mid-60s and the high-80s, so you will have cool nights and warm days. By June and July, you will notice a sharp increase in temperature, which means you will want to spend more time in the water, and by November the temperature will go down to low 50s at night. Although the humidity is consistently high in Orlando, the weather is not terribly overwhelming for most of the months throughout the year.

While there are no beaches in Orlando, the city is quite literally surrounded by beautiful beaches of all shapes and sizes so there are plenty of beaches near Orlando!

Vero Beach is less than a two-hour drive from Orlando, and it is one of the best beaches in the area. While this is technically a small town in Florida, there is plenty of beach access and more than enough dining and shopping for all your needs. 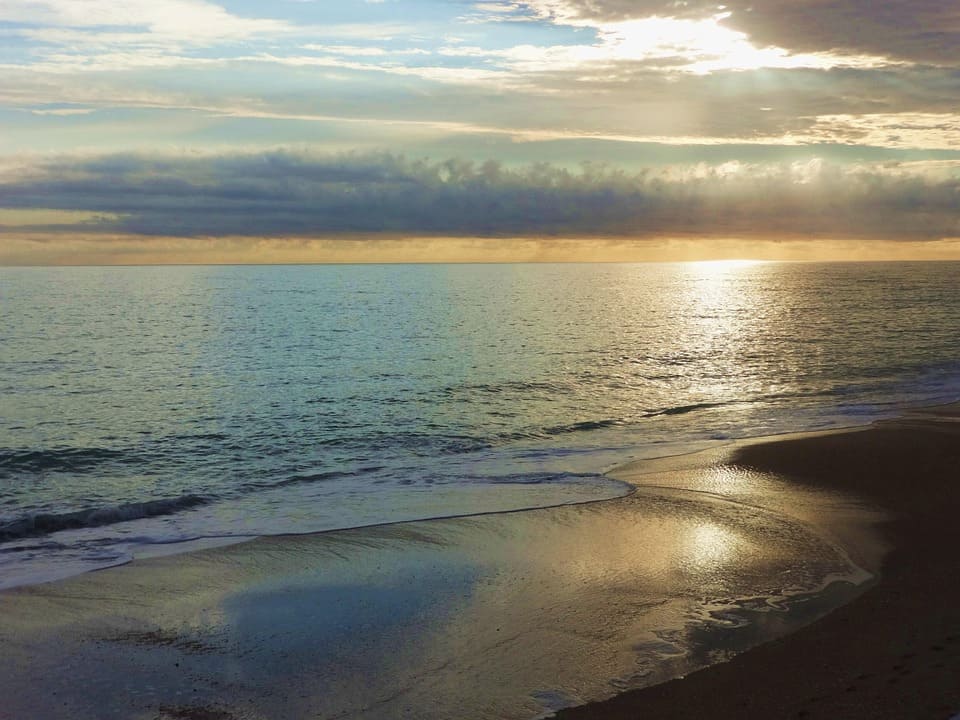 For such a short drive, you will find wide sands, and lots of amenities like volleyball courts and picnic areas. There is plenty of nightlife for after sundown, and plenty of parks to visit during the day if you are not already having fun on the beach. We think this is one of the best beaches near Orlando.

Just a short drive east of Orlando, you will find Cocoa Beach. This small Florida city is famous for its enchanting beaches, and top-notch surf. Cocoa Beach has four different parks that provide beach access, as well as amenities like parking, picnic tables, restrooms, and showers.

The parks that offer beach access in Cocoa Beach are Alan Shepard Park, Sydney Fisher Park, Lori Wilson Park, and Robert P. Murkshe Memorial Park. It is about one hour from Orlando to Cocoa Beach, so you will have no problem making a day of it without wasting a lot of time on driving. Cocoa Beach is a gateway city to the Kennedy Space Center Complex, and there are plenty of great dining options, so visitors will never be bored for a moment. If you’re looking for one of the best family beaches near Orlando, then you should head out here.

If you are looking for some fine beaches, or maybe even planning to ride the waves a little bit, New Smyrna Beach is a Florida city with plenty of beach access, and fantastic surfing. Only a short one-hour drive east from Orlando, you would not even need to get up that early in the morning to take a trip to New Smyrna Beach for the day, then head back to Orlando at your leisure.

From the Coastal Smyrna Dune Park, you can get a breathtaking view of Ponce Inlet and the lighthouse. There is plenty of nightlife and dining available in New Smyrna Beach, so you will never have to worry about looking for something to do, or somewhere to eat. And ths is also one of our favorite best beaches around Orlando.

One of the most famous beaches in the world is just a little over one hour away from Orlando, Daytona Beach. Daytona Beach is a vacationer’s paradise. You will find rides, arcades, shops of all kinds, and any type of food you can imagine. So if you’re in search of best beaches near Orlando Fl, then you should be heading to Daytona Beach!

There is more than enough beach access for everyone, and the sand is hard-packed in some places, so driving on the beach is permitted in specified areas. Daytona is the home of the Daytona International Speedway, where the Daytona 500 NASCAR race is held each year.

About an hour and a half northeast of Orlando, you will find St. Augustine Beach. Famous for its wide-open beaches, St. Augustine is a small Florida city located on Anastasia Island. Here you will find fishing from St. John’s Pier, beachside volleyball courts, splash-zones and playgrounds for the kids, and even a sea turtle nesting site. 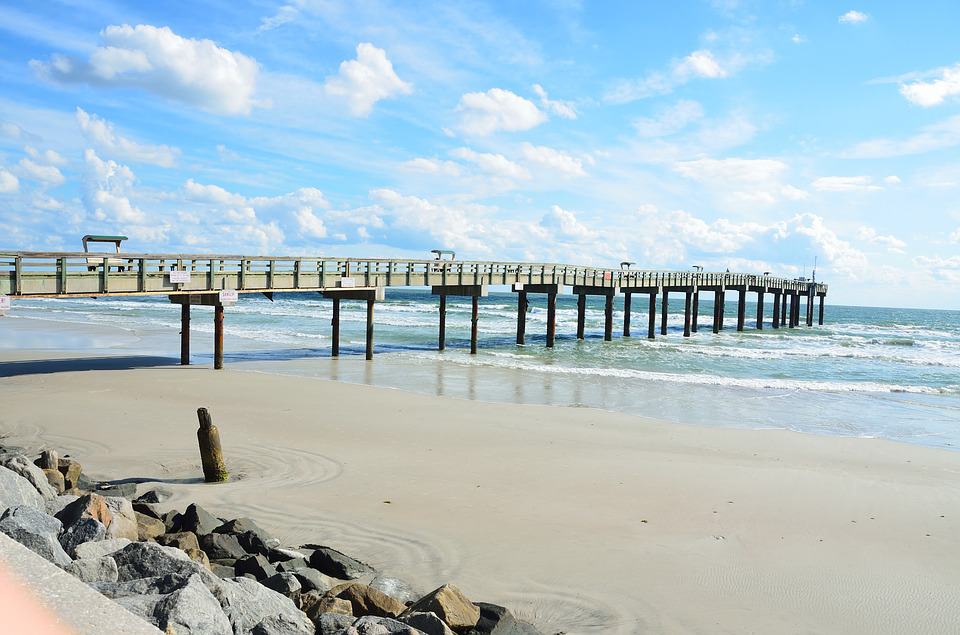 Found about two hours west of Orlando, Clearwater Beach is famously relaxed and serene. The soft white sand is wonderful for sinking your toes into while you take a load off. Then again, if you are in the mood for some high-speed adrenaline-pumping action, you can hop on some jet skis or go parasailing.

There is a long beach promenade for cyclists or skaters, and plenty of seafood restaurants for when you get hungry. Every night at sundown Pier 60 hosts a festival that includes music and dancing. Clearwater Beach is an awesome place to spend the day, whether you are trying to relax and take it easy in the sun, or party all night. So, if you’re in Orlando and searching for beaches near me, or looking for the best family beaches near Orlando that are white sand beaches, Clearwater Beach is a great stop.

St. Pete Beach is less than a two-hour drive southwest of Orlando, so getting there in the morning and heading back to Orlando that night would be a snap. Known for its pristine beaches, St. Pete Beach is a resort city that has something to offer everyone. It is also known as one of the best family beaches near Orlando.

You will find galleries, shops, and even a museum at the Passe-A-Grille area. The city is very close to Shell Key, where you can take a boat to see the sea turtle and sea bird nests.

A little more than two hours away, this is one of the furthest beaches from Orlando on our list, but it was still worth it to list it, because it is such a fantastic place to spend a day. With its perfect white quartz sand on miles of beach access, you can dig your toes in and just relax. If you are looking for best beaches in Florida, this has to make your list! If you’re in the area and searching for the nearest beaches near me, this is the place to go!

The waters are shallow and there are year-round lifeguards, as well as simple amenities that make your time on the beach a little more fun like volleyball courts. There are places to shop and eat in Siesta Key City as well.

The drive from Orlando to Caladesi Island State Park is only around two hours, so nothing to worry about there. Located on Caladesi Island, the beach has all the great amenities and activities you might hope for. This is probably one of the best beaches on the east coast and one of that Orlando beaches lovers would love visiting.

Hardly more than an hour northeast of Orlando, the drive to Flagler Beach is a short and easy one. Just in case there was any doubt about the coolness of this particular town, Flagler Beach was a finalist for the 2013 Budget Travel Magazine contest for “Coolest Small Town”. How many towns can you say you have been to that were nominated as one of the coolest towns out there?

If you want to get away from the hustle and bustle of beaches like Daytona, consider this smaller and less developed beach. It’s six miles of sand are given an almost orange hue from the crushed coquina shells. Only one pier can be found on the six-mile stretch, so the beach is usually fairly quiet and sparsely populated compared to many other beaches. In town, you will find a sort of laid-back retro vibe, but there is plenty of shopping and dining to take advantage of. We certainly say this is one of the top 10 beaches near Orlando and one of the best beaches on the East Coast.