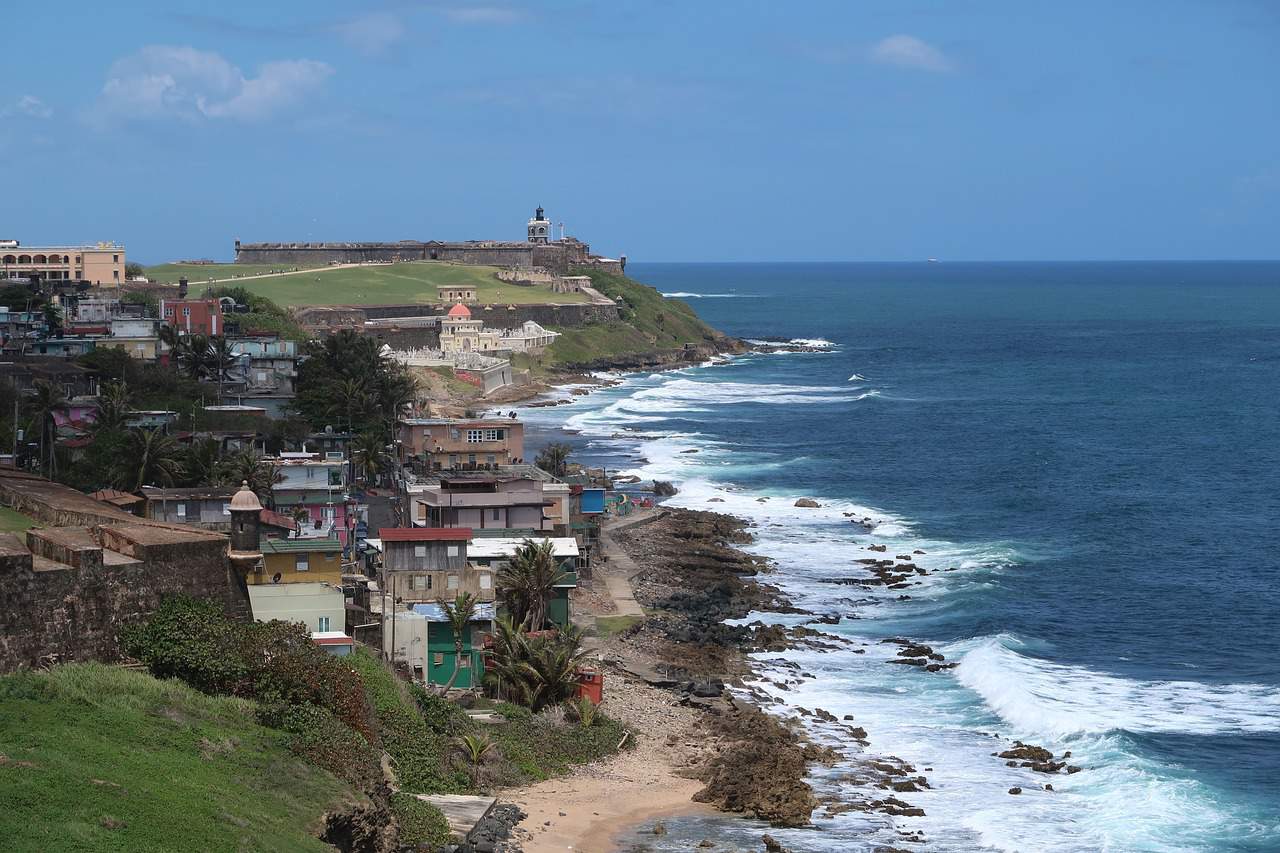 The name “Puerto Rico” conjures up images of tropical beaches, sun-bathed sand, and dancing palm trees. This island region of the US has long held a reputation as a tropical paradise; located way out in the Caribbean Sea and North Atlantic Ocean, it’s a great destination to take your kids for that next vacation.

Puerto Rico combines a mix of waterside and on-shore fun to make your vacation truly unique. Coming up, we’ll examine some important information regarding this island territory and go over ten of the best places to vacation in Puerto Rico with kids.

Is Puerto Rico Part of the US?

If you’re like most of us, you probably have just a bit of difficulty finding Puerto Rico on a map. One of the many islands floating on the pristine waters of the Caibbean Sea, Puerto Rico is small and has its own distinct culture. Despite this, it is an overseas territory of the US, with the citizens of Puerto Rico bestowed the full rights granted to those on the US mainland.

Is Puerto Rico a State?

So is Puerto Rico a state? Not exactly. Though there have been a number of referendums to bring statehood status to Puerto Rico, each has failed by vote of the Puerto Rican people.

Not sure where to find Puerto Rico on a map? Here,  you can get a better idea of the island’s whereabouts and overall geography. Despite its small size, Puerto Rico has a lot to offer, so you will find the best places to go with your family!

Do you need a Passport to Visit Puerto Rico?

The population of Puerto Rico hovers near 3.2 million people, giving it a similar population to US states such as Mississippi and Arkansas.

The best time to visit Puerto Rico is generally considered from mid-April to the beginning of June, when the island finally wrestles out of the grasp of winter into the steady warmth of Caribbean spring. From June onwards, the country enters an extended rainy period that also brings the threat of hurricanes.

As a US territory, Puerto Rico uses the US dollar as its currency.

An overwhelming majority of the population (90%) speak Spanish as their native language, though both English and Spanish are the official languages of Puerto Rico and English is widely spoken as well. 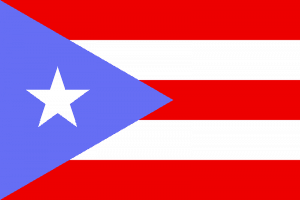 The Puerto Rican flag depicts a red-and-white-striped background consisting of three red stripes and two white. This background is overlaid to the left by a blue sideways triangle emblazoned with a single white star.

Puerto Rico is considered generally safe, though you do want to watch out for pick-pocketers and other thieves in tourist-dense areas. You’ll also want to avoid hurricane season, when mighty windstorms whip up from the ocean and threaten the territory. Officially, hurricane season begins June 1 and ends November 30, so you’ll want to plan your trip based around this. In recent times in Puerto Rico, hurricanes such as Maria have brought devastating destruction, with this potential renewing each hurricane season.

The capital of Puerto Rico, San Juan is home to a number of delicious restaurants and locations that you don’t want to miss out on. Start by exploring the UNESCO World Heritage site Castillo

San Felipe del Morro, a 16th century structure that still boasts incredible battlements, cannons, and other old structures that provide tons of fun and a history lesson to boot.

2) The Lawns of El Morro

Kick back and relax with the little ones on the stunningly green lawn of Castillo San Felipe del Morro when you’re done with the tour. Here, families come from all over to spread multi-colored blankets and indulge in picnics, games, and other frolicking fun. Buy a kite from a local vendor and fly it with the kids or eat delicious piraguas together as a family for a cool treat on a hot day.

The only rainforest preserved and maintained by the US government, El Yunque National Forest is one of the most visited sites in all of Puerto Rico. Here, you and the little ones can meander through hiking trails, take the perfect family photos next to pouring waterfalls, and even get on horseback to truly catapult your experience to the next level.

El Yunque National Forest is fun for all ages, though many of the standard hiking trails and sites have been temporarily shut down after the catastrophic 2017 Hurricane Maria.

Condado Lagoon offers the best paddle-boarding experience in the Caribbean. If you’re looking to take up the sport or simply wish to have a memorable afternoon with the kids, make sure to check out this dreamy lagoon and have your paddleboards ready. The goal is to stay upright on your board for as long as possible—a fun challenge for kids and parents alike.

Take a kayaking trip through Mosquito Bay and watch the water come to light with the glow of millions of tiny plankton. This trip is best performed at night, when visibility is limited and the glow of the plankton illuminates your voyage. Kayaking Mosquito Bay is great for older children, especially, and promises to be fun for the entire family.

Want to tour the island in style? Campo Rico Ziplining offers incredible ziplining tours that will allow you to glide over the treetops for the perfect aerial view of the island. This activity is great for older children and teenagers and offers you a chance to see Puerto Rico like never before.

The Museo del Nino is located in the Carolina neighborhood outside San Juan and is the perfect location to spend a day with your kids. This child-centered museum truly has it all: rock climbing walls, laygrounds, go-kart racing, and even a mini petting zoo.

No matter the children, they will find something here that suits his fancy. The Museo del Mino spans three stories and promises an afternoon that your children won’t ever forget.

Of course, no vacation in Puerto Rico complete without a day at the beach—and what better place to spend it than Condado? The most popular Puerto Rico beach by the numbers, Condado has everything you want in a beach vacation. Soak up the beautiful Puerto Rico weather on dazzling shoreline perfect for building sandcastles and sunbathing.

Who doesn’t enjoy fine dining? With a trip to Jose Enrique Restaurant, you can enjoy the best food anywhere in Puerto. Headed by award-winning chef Jose Enrique himself, the restaurant combines the best in Puerto Rico flavors for a culinary experience unlike any you’ve ever had. In short, there’s no better way to familiarize yourself with Puerto Rico cuisine than by learning from the master himself.

The restaurant serves a variety of meats and seafoods that you’ll want to try despite the price tag. Whether you simply want the best or would just like to take a break from street food, eating at Jose Enrique is one of the best things to do in Puerto Rico.

Never heard of Luquillo Beach? It’s time that you did. Consistently recognized as one of the best Puerto Rico beaches, this Caribbean delight is the perfect place to enjoy the weather in Puerto Rico. Luquillo Beach is noted for its tranquil atmosphere, clear waters, and the incredible array of kiosks that dot its shores.

Got a hankering for something special to eat? Simply head over to one of the nearby restaurants and try some of the best seafood you’ll ever eat. Luquillo Beach is fun for the whole family and should definitely be on your bucket list.

Puerto Rico is a hidden American gem. If you’re looking for a Caribbean vacation that won’t feel that far from home, you definitely want to consider visiting this beautiful island. From incredible beaches to engaging historical sites, Puerto Rico has everything you could ever want in a tropical getaway. Better yet, the nation is child-friendly, meaning there are several activities the whole family can partake in while vacationing there for the ultimate Puerto Rico family vacation.