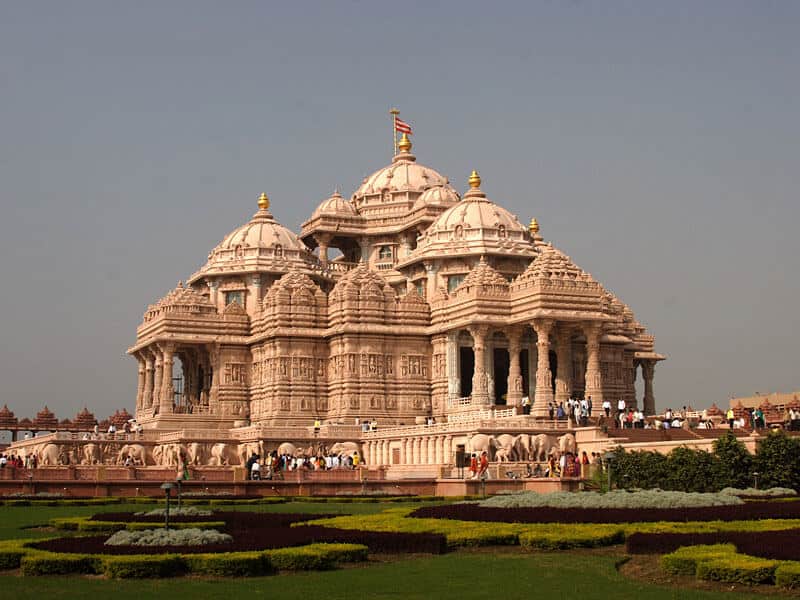 Asia is the largest continent in the world. Home to more than half the world’s population and a variety of different cultures, there is much to be found across this vast land. One of the most defining characteristics of societies is its culture. But in addition to culture, another aspect of a society is its faith.

There are several faiths all across the world, and Asia happens to be the birthplace many of them; including Christianity, Hinduism, Islam, Buddhism, and so on. And this is evident in many of the amazing historical sites that you can come across, throughout Asia. One of them is that of temples; built by faiths like Hinduism or Buddhism.

There are several temples all around and across Asia, particularly Southern, South Eastern and Eastern Asia.

Given in the list below are five of the best temples you can visit while in Asia.

Angkor Wat is a temple complex in Cambodia built by king Suryavarman II in the 12th century and is the largest religious monument in the world.

Spanning over 402 acres, it was originally built as a Hindu temple dedicated to God Vishnu for the Khmer empire. It was gradually converted to a Buddhist temple with the passage of time. 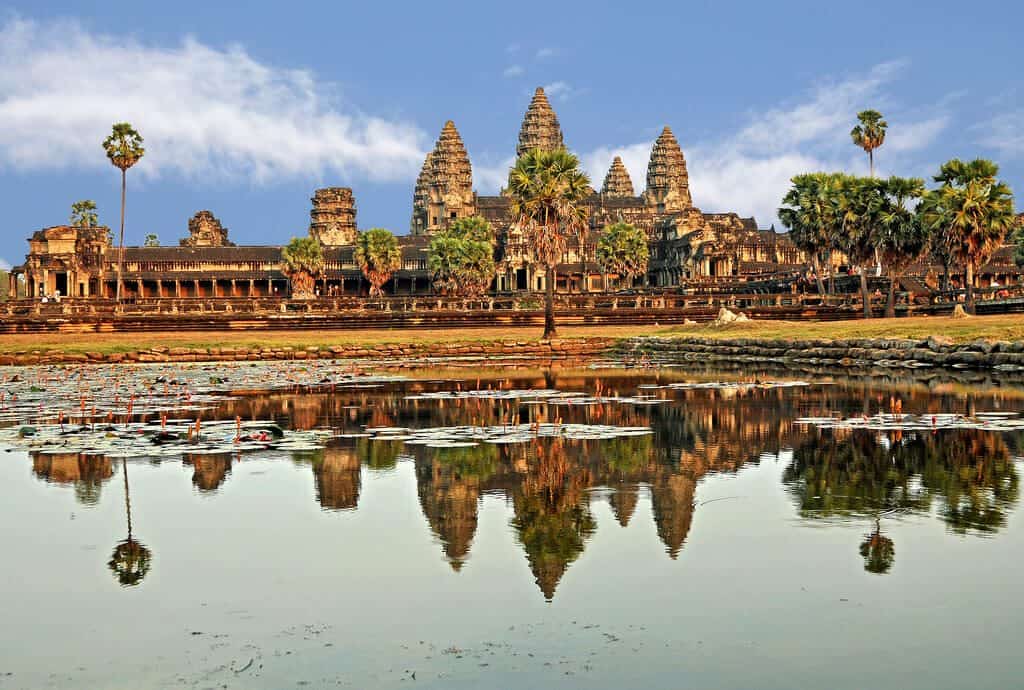 The tallest part of the temple stands at 213 meters or 699 feet, which gives it its imposing appearance. The temple complex consistsof five towers, four in the corners and one in the middle in a “quincunx” arrangement.

The complex is vast and spread out across a huge area, to the point where early studies were unable to get a layout of the temple site. Millions of cubic feet of material had to be dug out to create a moat around the temple, which is thought to have been created by a workforce of thousands of people, all of who were working simultaneously.

Having many covered galleries, elevated towers, chambers, porches and courtyards, it is one of the biggest, most intricate and breathtaking man-made constructions in the world.

The temple is an excellent example of an architectural blend between Kerala and Tamil building styles. The temple is dedicated to several deities, such as Para Brahman, Maha Vishnu/Adi Narayana in the Anantha Shayanam posture or “eternal yogic sleep” on the serpent Adisheshan.

The historical records of the temple go back to ancient times. The temple has been referred to in literature as far back as 500 BC with records found from 1425 AD. 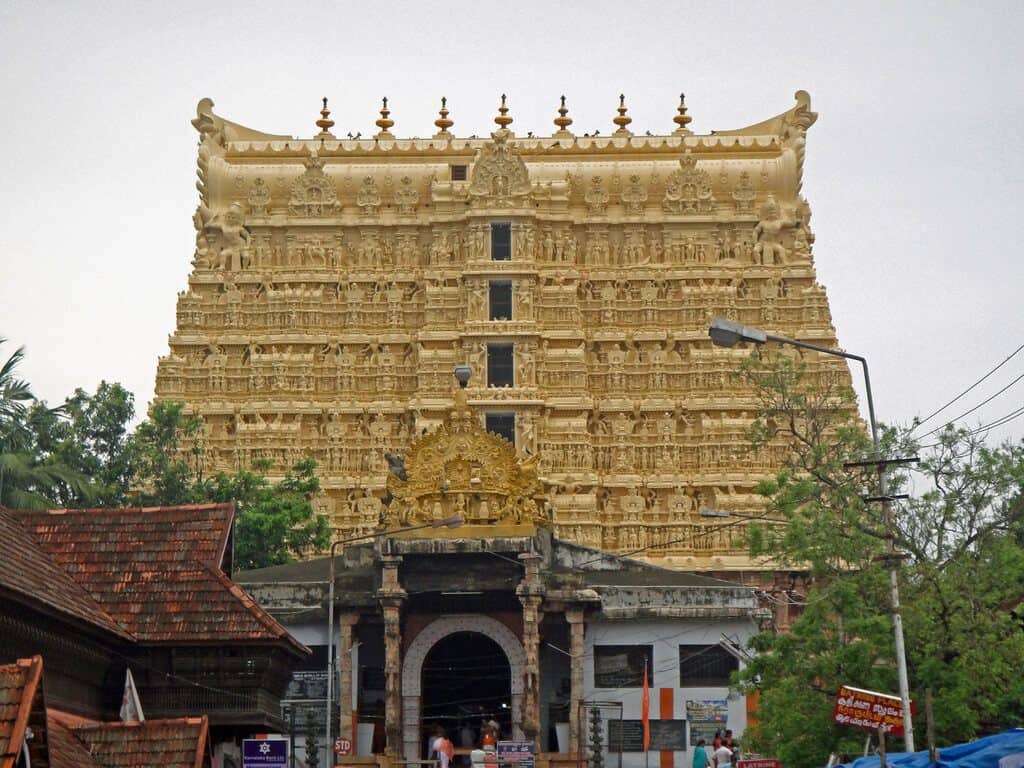 The main shrine of the temple has Padmanabha reclining on the serpent Anantha with five hoods facing inwards. The Lord’s right hand is placed over a Shiva Lingam with Sridevi Lakshmi(Goddess of prosperity) and Bhudevi(Goddess of Earth) by his side.

The temple is one of the richest in terms of treasure and cultural value. The temple has six known vaults with vault B unopened for many centuries. When the supreme court of India tried to open vault B, it had a wooden door behind the main door. The wooden door had another door made of iron behind it jammed shut.

The temple’s treasure is immense. Some of the treasure inside includes hundreds of thousands of gold coins of the roman empire, 800 kg of gold coins dating back over 2000 years, ceremonial attire for adorning the deity, 1200 pure gold coins encrusted with precious stones, several sacks filled with golden artifacts, pure golden throne, 4 x 3 foot solid golden idol of Mahavishnu studded with diamonds, 600 kg of gold coins from the medieval period, gold pots, chairs and ornaments worth several billion dollars not including the historic and cultural value.

Likewise, Vault B might be worth over $700 billion in treasures but remains unopened. There are also legends that the vault is guarded by king cobras.  And this temple is rated one of the best temples in Asia.

Sri Senpaga Vinayagar Temple is located in Ceylon Road in Singapore. It is a temple built for the Hindu God Ganesha, and whose design is based on the Dravidian architecture of southern India. 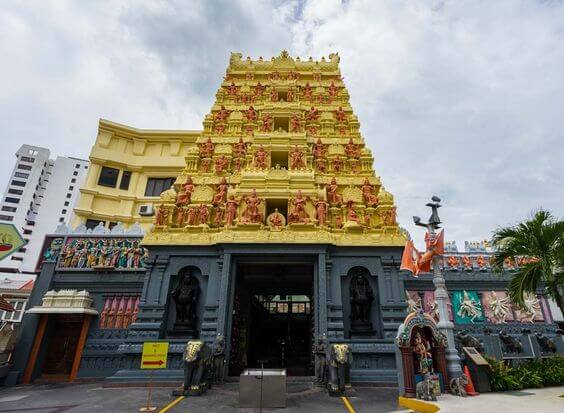 The temple was built in the place where a statue of Lord Vinayagar(Elephant God) was discovered besides the Chempaka tree. The temple was damaged during the Second World War, and was restored several years later, around 1955.

It has several facilities inside of it including classrooms and a library. Also, the temple has sculptures of God Shiva with eight arms, dancing Sathura and Santhiya Thandavam on the exterior facade of the temple. If you’re ever in Singapore, this temple is really worth visiting.

Akshardham (New Delhi) is an enormous Hindu temple complex and cultural centre in the country’s capital.

It displays the thousands of years of Hindu and Indian culture, technology and spirituality. It was built by Pramukh Swami Maharaj, BAPS following the vision of Yogiji Maharaj.

The Akshardham Mandir stands at 43 meters tall, 96 meters wide intricately carved with deities, flora and fauna and the architecture is the blend of all major building styles of India. The Temple complex has no steel or concrete, but rather built entirely out of Rajasthani pink sandstone and Italian Carrara marble. In total, there are nine domes and the mandir itself has 234 carved pillars.

There are 20000 Murtis or statues of sadhus, devotees and acharyas throughout the complex. The temple uses contemporary methods of robotics, animation, dioramas to portray swaminayan’s life and his teachings. It also houses a huge 85 by 65 foot theatre screen to show people the 7 year pilgrimage Swaminarayan made across the country in his teenage years.

Last but not the least, there are also musical fountains, a boat ride to showcase the journey through 10000 years of history, gardens and an extensive indigenous medicine research centre.

Paro Taktsang also known as the Tiger’s Nest is a temple complex in Bhutan built in 1692.

The temple complex is built around the Taktsang Senge Samdup cave, with eight caves connected to the temple. In other words, it’s a temple complex that has been constructed in and around an existing cave network.

The complex consists of four main temples each interconnected by staircases carved into the rock itself. It is located in the cliffside of the upper Paro valley, and is the cultural icon of Bhutan.

It is said that Guru Padmasambhava meditated there for three years, three months, three weeks, three days and three hours during in the 8th century. 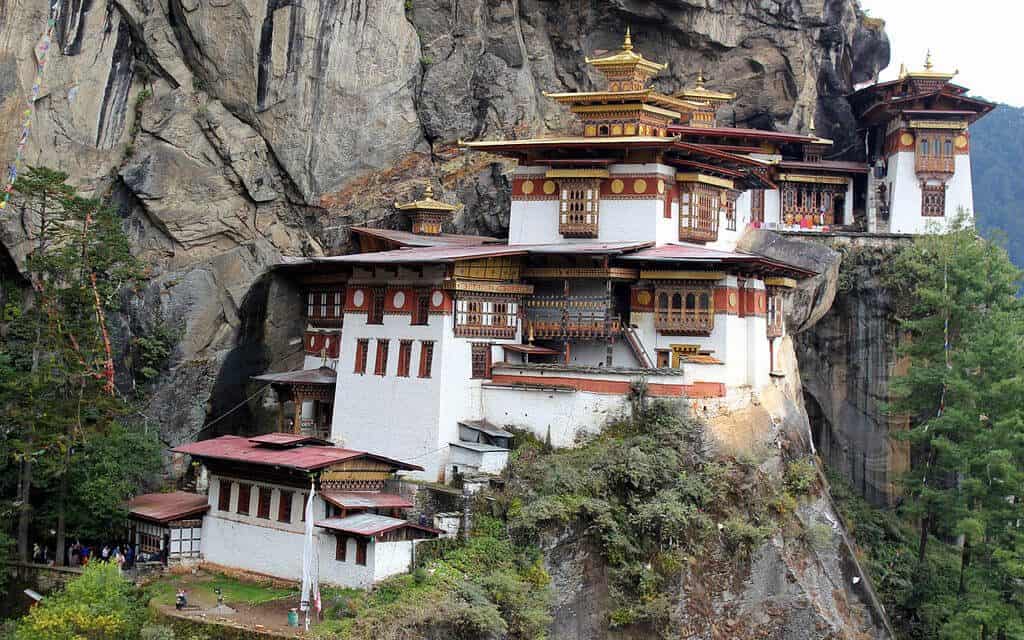 The exact temple site is about 3120 meters above the sea level, and has three ways to access it; One way is through the pine forest, while the other two through the plateau. Also, there is a prayer wheel in the temple courtyard that is rotated by the monks every morning.

In all, there are plenty of temples located all across Asia. The above mentioned are but a sample of what you can expect when you arrive here.

With a variety of different architectural styles and from different aspects of spirituality, Asia has much to offer anyone who seeks to visit this aspect of the continent’s cultural heritage.

Simply put, the continent is a place like no other, if you want to set out exploring the many temples that dot the landscape.