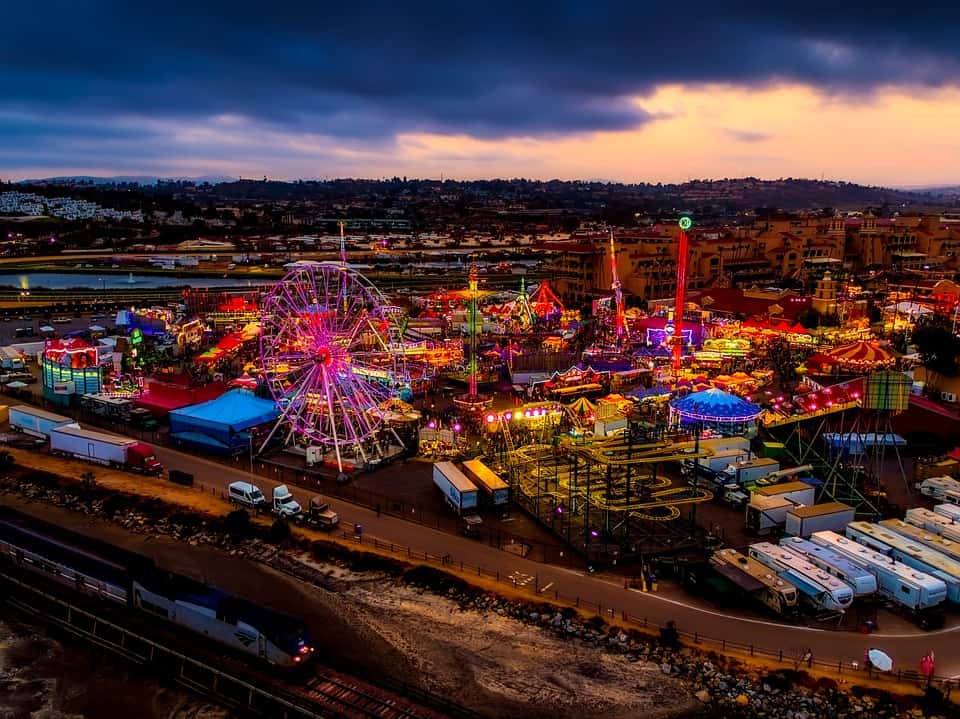 With so many wonderful developments in the entertainment industry, amusement parks over the world just get better and better. There is always some rivalry between them to keep innovating and improving their overall presentation and entertainment rides.Not only do entertainment parks do just that, entertain and amuse, they also take some responsibility to inform and educate those who pass through their gates.

Regardless of which continent you are on, there will be an amusement park somewhere on it. You can join millions of visitors who get a kick out exploring these parks and taking thrilling rides every year. The parks strive to keep updated, relevant, and real with zoological features as well as fantasy. And the beauty is that all thrills are designed to be relatively safe adrenalin boosts. Your brain gets a thrill without the risk of a spill.

Let’s have a look at some amusement parks that are popular throughout the world.

Make no mistake, this park is in Denmark not Italy, though it shares the same name as the famous fountain. Tivoli Gardens has been amusing people for a long time, about 150 years in fact since it opened in 1843. By now, it sure knows how to get many things right to keep both locals and tourists amused. Because of its heritage, it maintains some vintage amusements and rides, as well as constantly upgrading others.

Rutschebanen is the original Roller Coaster, and is still thoroughly entertaining as it winds its way rather sedately around the park’s inner slopes. However, there are more thrilling coasters such as Dæmonen (The Demon)with “no floor seats”to leave you visibly hanging for extra shock value.

Orlando, Florida is a kind of Mecca for amusement parks, with both Universal and Disney World situated within relatively close proximity to each other. You can easily fill a week visiting both parks and still go back for more.

Universal is understandably focused around movie experiences from great media productions such as King Kong, E.T., Harry Potter, and the Despicable Minions.At Universal Studios, your favorite fantasies will come to life around you. Harry Potter is,of course, acurrent favorite in line with the immensely popular books and movies. Diagon Alley Wizarding and Hogsmeade from Hogwarts’ World of Harry Potter will have you under its spell, playing quiditch, and  then drinking Butterbeer at The Three Broomsticks bar.

Brazil is home to South America’s largest and most popular theme park, which covers a massive 3,500 acres! Like many things in South America, Beto Carrero is bright and colorful from the moment you enter the vibrant Castelo das Naçõesfor tickets, shops, and restaurants. Beto Carrero World has rides, entertainment shows, and a zoo park. Check out the Radical Adventure, Fantasy Land, Avenue of the Nations, the Wild West,Pirate Island, Animal World, and the German Village.

There are four exciting roller coasters dotted throughout the park, which is divided into seven different areas. Chicote de Fogo is a looping suspended coaster that reaches up to 60 mph, giving it the nickname Fire Whip.The Velozes e Furiosos Show is an energy fueled automobile stunt show in the vein of Fast and Furious.

This park is a mega center for various entertainments in South Korea, including the world’s largest indoor theme park, so you never have to worry about the weather. Some of Disney’s most popular attractions have been faithfully recreated and perhaps in some instances, even improved upon. 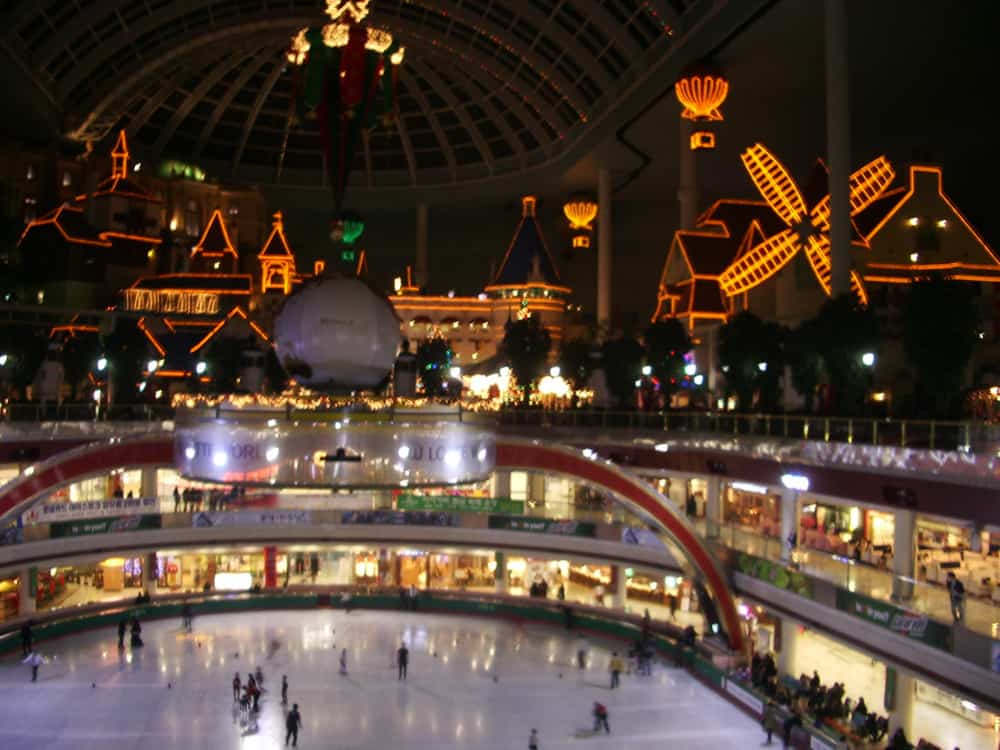 Pharaoh’s Fury has a distinct resemblance to the Indiana Jones Adventure while Adventures of Sinbad can easily be imagined as a boat ride on Pirates of the Caribbean.

No list of theme amusement parks would be complete without including the most famous of all, Disneyland in California. Walt Disney would be more than happy to know that his dream still entertains children and adults from all over the world. The park may not be as large as modern parks, but it is continually maintained as well as developed to keep pace with worldwide amusement park trends. 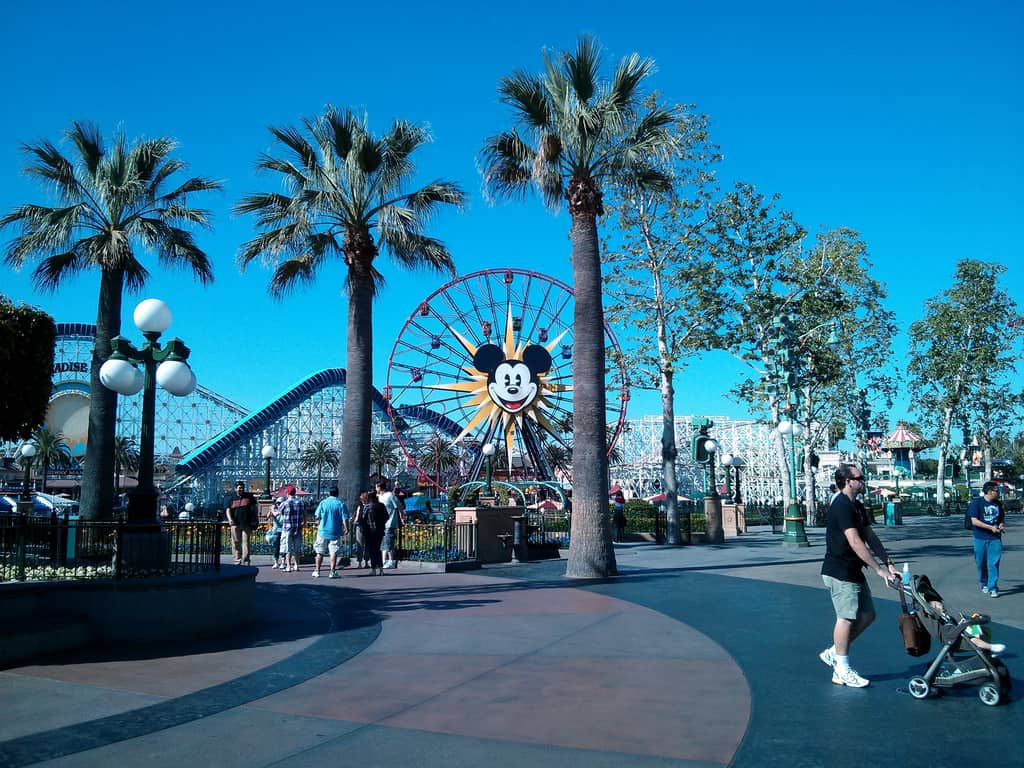 Mickey and Minnie started greeting guests in 1955, and are still there to greet you as you wander down Main Street U.S.A.Peter Pan’s Flight is as enchanting as ever since J. M. Barry first wrote the story and it was one of the park’s original rides. One of the later ones is the Indiana Jones Adventure, which takes you on adventures down crypts all over the planet.

Three major attractions are brought together in Ocean Park. Ocean Park combines an amusement park, a zoo, and a marine park which covers over 220 acres of Honk Kong Island. The two distinct areas, The Summit and The Waterfront, are connected via a funicular train and a cable car. 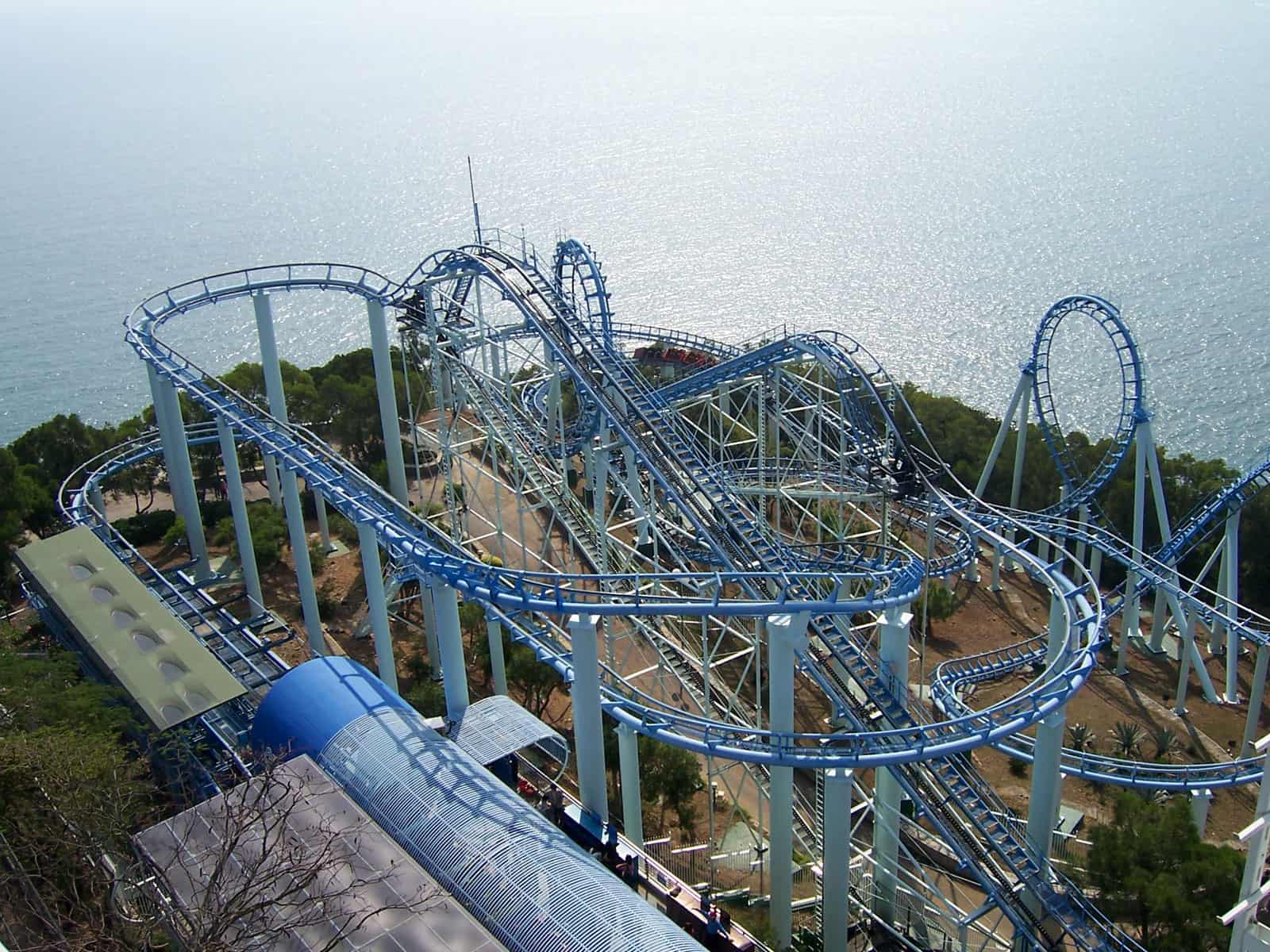 The Summit roller coaster gives a great view of Hong Kong Bay, providing you can keep your eyes open long enough during the thrilling inversions on the floorless car’s speed loops. There are over 80 rides, but the most visual are the four roller coasters and two inspiring water slides.

Another one of Europe’s popular parks is in the Netherlands ,where fun can be found all year round. Operating since 1953, the park has 35 rides and 6 roller coasters that ensure enough thrills for all the family. One of the latest exciting additions is the Baron 1898, which opened in 2015. The Baron is a three-row train that drops down 90-degrees  into a 123-foot mineshaft – guaranteed to leave your heart in your mouth! 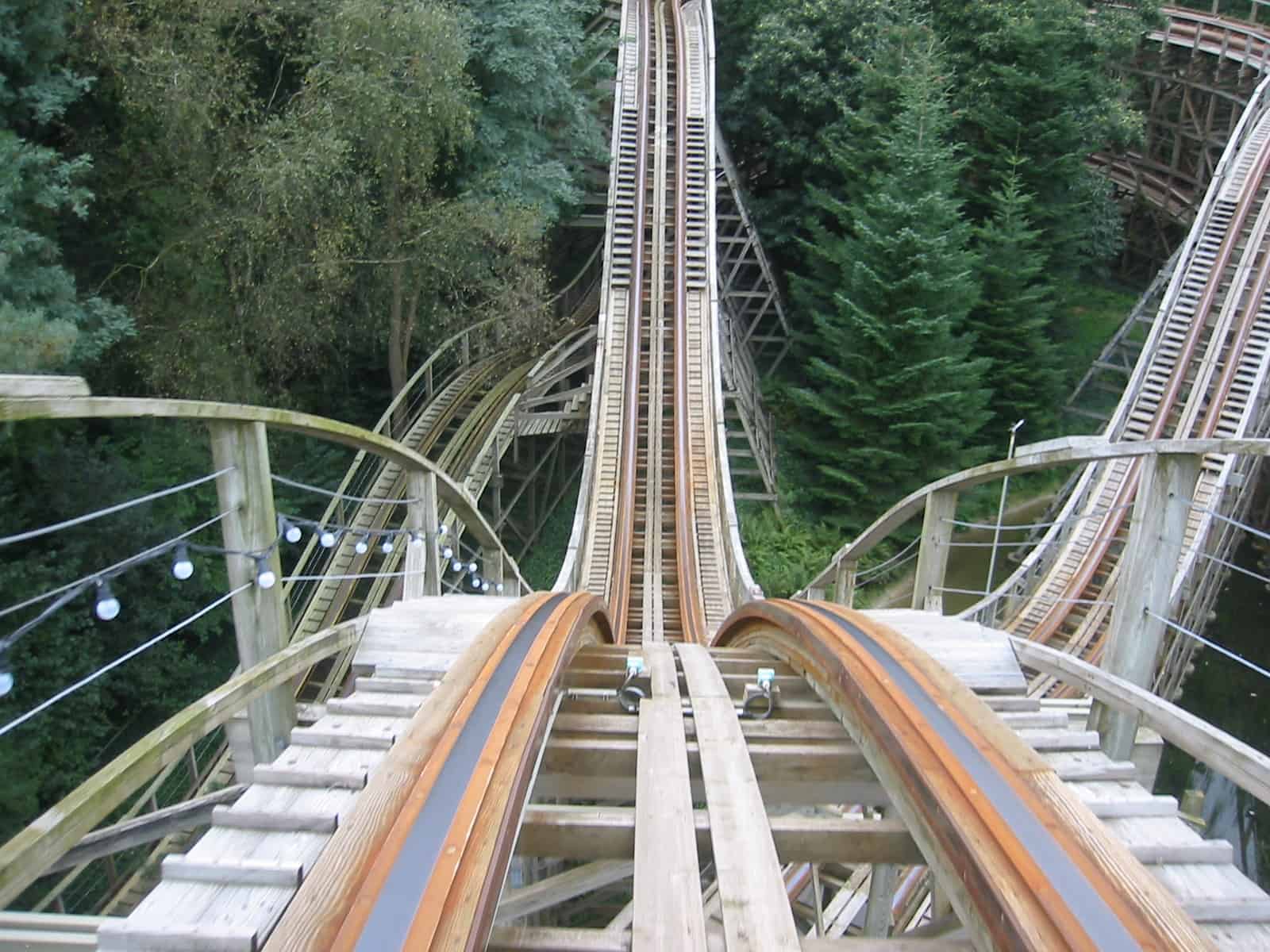 However, younger children are not left out, as there are more sedate rides through fantasy lands full of enchanted forests and dreamy castles taken from tales in classic story books.

Six Flags Mountain opened in 1971 on just over 260 acres of land, so it is a relatively small park. However, if you are a roller coaster fanatic then you are in for the time of your life. The park now has 19 roller coasters, which is the most of any amusement park in the world.

Roller coasters are often limited by age and height, but Six Flags Magic Mountain ensures that children  are not left out of the excitement. With four children’s roller coasters,there is enough to bring out the thrill seeker in the smallest children. Another all family experience is the Helpful Honda Express, which transports passengers up very steep inclines to the top of Samurai Summit using a funicular railway with cogs to cling to its tracks.

This is just a small selection of amusement parks available all over the world. They are so much fun for all ages, so be sure to plan a visit to a park close to you today. Or even better,incorporate a longer visit into your next family holiday.

9 thoughts on “Best Amusement Parks in the World”