Asia is the largest continent in the world. Home to more than one half of the planet’s population, it is one of the most unique regions in the entire world. Stretching from the Mediterranean in the east to the Pacific Ocean in the west, Asia is one of the most culturally rich and diverse regions of planet.

If you happen to be visiting Asia anytime soon, you will be spoiled for choice, when selecting a suitable country. There are more countries than you could fill up your itinerary with, making the selection process really confusing. Given in the list below are five amazing countries in Asia that you can check out on your next travel adventure.

Cambodia is a country located in Southeast Asia, and spread across the Indochina peninsula. Bordered by Thailand, Laos and Vietnam, the country is home to over 16 million people.

The country’s history dates back to ancient times, with empires stretching back centuries and even millennia.

It is today one of the most important tourist destinations in the region, attracting over 5 million tourists every year.

Some of the most important tourist attractions of Cambodia are:

Angkor Wat – Built by Suryavarman II and completed by Jayavarman VII in the 12th century, it is devoted to the lord Vishnu and receives over 2 million visitors each year.
The temple is built using over 5-10 million sandstone blocks in a Khmer architectural style. It is surrounded by a large moat, one of the largest in the region, and said to require a vast army of workers to build. The complex is very vast and spread out across a huge area in the region’s countryside, to the extent that early explorers were unable to map it accurately. This temple is one of the best temples in Asia.

Banteay Srei – Banteay Srei is a 10thcentury Cambodian temple, dedicated to God Shiva near the hill of Phnom Dei. The temple is built largely of red sandstone and is famous for its decorative wall carvings. In addition to this, it also has an unusually small size in comparison to some of the other monuments in the region, and is thus known as the jewel of Khmer art. 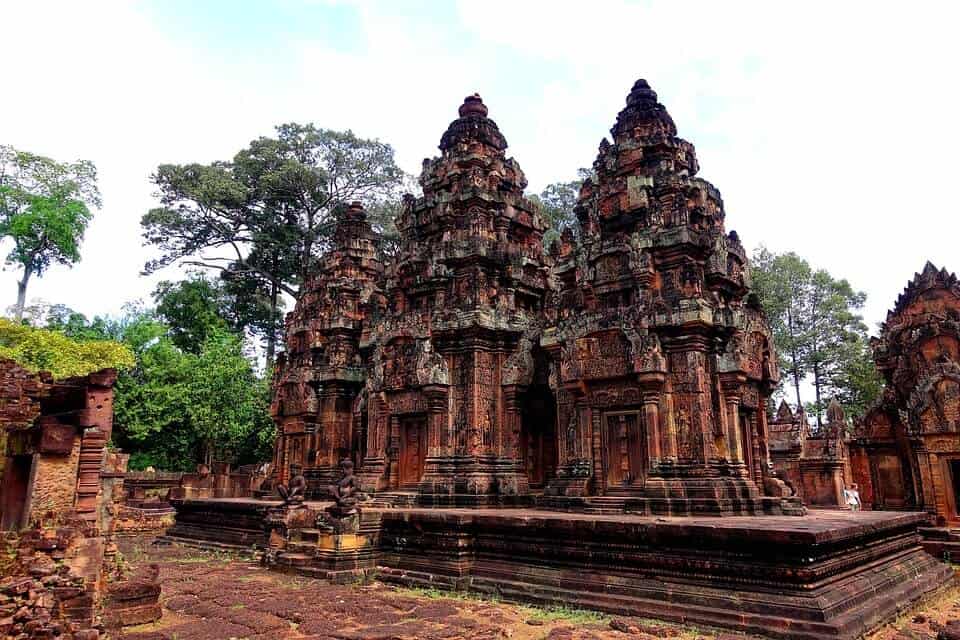 City of Kampot –The city of Kampot acts as a base for trekkers and mountaineers who seek to climb the stunning Bokor Mountains of Damrei. Famous for its extensive pepper fields, it has become an important destination for agricultural tourism. In addition to it, there are several historical monuments and temples that you can explore while you are in the city.

Koh Ker – Koh Ker is a remote archaeological site in northern Cambodia, with significant cultural and historic value. The region is still relatively unexplored, to the point where jungle patches cover many of the buildings and surrounding areas. Even today, many of the site’s monuments remain hidden and unknown to the world. There are about 12 dozen monuments that have been discovered and opened to tourists. The process is currently under excavation and it is likely that the other monuments will be uncovered soon.

Singapore is a city-state island country in Southeast Asia, and consists of one main island and 62 islets.

Starting off as a small trading post and settlement, it has today become one of the biggest centers for trade and commerce in the region. With the passage of time, it has emerged as an important tourist destination, receiving 17 million tourists every year.

Some of the most important tourist attractions of Singapore are:

Marina Bay – Marina Bay consists of several science museums, casinos, shopping complexes and dining centers. It is one of the most visited places in all of Singapore for its diverse cuisines, authentic food and nightlife.

Clarke Quay – Clarke Quay is a historical riverside quay located near the mouth of the Singapore River. It is famous for its riverside bars and restaurants, shopping and nightclubs. There are several boutique shops around the area. 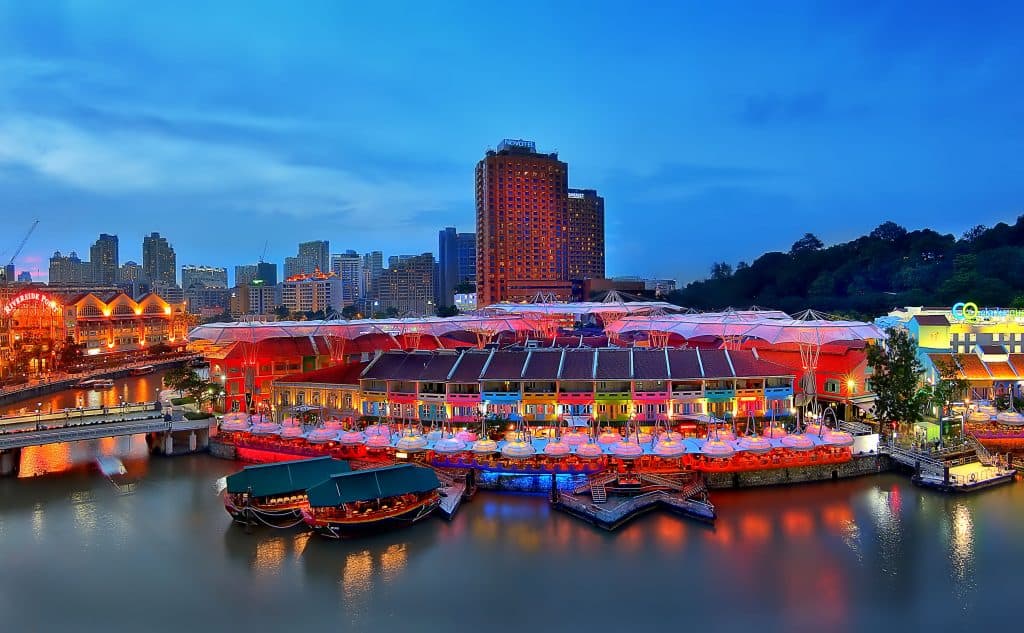 Jurong Bird Park – This is one of the most famous bird parks in the region, and displays a variety of different bird species from around the planet.

Universal Studios –Singapore is also home to Universal Studios Singapore, the first amusement park in all of Southeast Asia. The construction of Gardens of the Bay earned it the title of 2012’s world building of the year. A spectacular futuristic park in the bay area of Singapore attracts visitors from around the world.

The Merlion – This is but a small fountain at the edge of Singapore’s waterfront, but one of the most important tourist attractions. It is a fountain and basically a merlion, or a mermaid, with the upper body resembling a lion. Featured in everything from travel brochures and catalogues to the official website, this is a very famous tourist attraction not to be missed.

Vietnam is a country in Southeast Asia and home to about 94 million people.

Stretching across much of Southeast Asia and bordered by countries like China, Laos, Cambodia and Thailand; it is one of the most important tourist destinations in the region.

Some of the most important tourist attractions of Vietnam are:

Sa Pa – Sa Pa, also sometimes spelt as Sapa, is a town in north-west Vietnam and the capital of Sa Pa District in Lao Cai Province. Sa Pa has Vietnam’s highest mountains, Fan Si Pan which is 3143 meters above sea level. It is well known for its vast and scenic view of the mountains, which are complimented by terraced fields. The region is home to a rich variety of plants, birds, mammals and amphibians. Some of the species found here are endemic, and found nowhere else.

Mekong Delta – Mekong Delta region is located in south-western Vietnam, where the Mekong river empties into the sea. The region has one of the highest numbers of animal species in the world. It is also very popular for its bird watching and sightseeing tours, especially in the Tram Chim National Park region. The park is home to a quarter of all bird species in Vietnam, both resident as well as migratory. In addition to this, there are several ancient and historic sites like the Binh Thuy Ancient House. 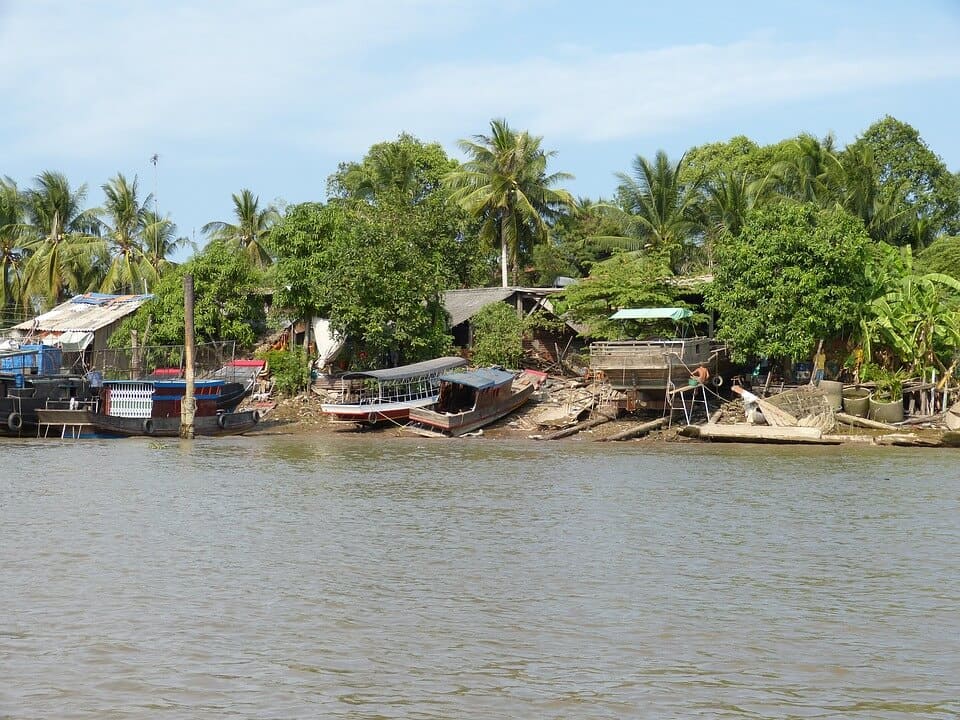 Da Lat – Da Lat, sometimes spelt as Da Lat, is a city in Vietnam that sits on top of the Langbian Plateau and known for its year-round cool weather. At its heart is the Xuan Huong Lake surrounded by floral gardens and central market. Dalat is popular to both domestic and international tourists for its backdrop, waterfalls and opportunities for young explorers. Motorbike tours are available along with many tour guides who know the region well.

Hoi An – Hoi An is a city with over 2000 years of historic value. It is listed as a UNESCO World Heritage site receiving a massive number of tourists each year. The city was a port of the Cham Kingdom, and a major center for regional trade. There are several museums like the Precious Heritage Museum, Museum of Folk Culture, Trade Ceramics, Sa Huynh Culture and the Museum of History and Culture, which depict the rich cultural history of Vietnam.

Malaysia is a country located in the Malay Peninsula, and one of the most important tourist destinations in the region. It is home to the Malay people, and has a population of about 30 million. With vast expanses of rainforests, a rich culture and more, the country is frequented by millions of tourists from around the world. It is one of the best places to travel in Asia this year.

Some of the most important tourist attractions of Malaysia are:

Kuala Lumpur – Kuala Lumpur is the capital and largest city in Malaysia. It is home to 1.7 million people and sits in the Klang Valley. The metro region is home to over 7 million people and is one of the fastest growing cities in the world. The main attraction of the city includes the petronas twin tower, the national palace, museum, central market and several museums.

Langkawi – Langkawi is a district in Malaysia that consists of 99 islands. It is well known for its vast landscapes, ocean views and urban culture. The Langkawai Cable Car takes tourists up to the peak of Gunung Mat Chinchang which has a great view of the distant horizon.   Also, there are various activities like cruises, snorkeling, island hopping and shopping in the area. The Cenang Mall, Langkawi Saga Supermarket and Langkawi Fair are especially well known.

Kota Kinabalu – Kota Kinabalu is the state capital of Sabah in Malaysia. There are several cultural institutions in the city like the Sabah State Museum, Sabah Art Gallery and the Hongkod Koisaan building in this region. It is most famous for its annual Kaamatan or Harvest Festival, which is one of the biggest celebrations in the region.

Mount Kinabalu – Located on the island of Borneo, Mount Kinabalu is a mountain in Sabah, Malaysia which is a world heritage site. Its peak is the highest in the Malay Archipelago at 13435 feet. It is estimated to be one of the most biodiverse regions in the area, and is a protected nature reserve.

India is a country in South Asia, and home to about 1.2 billion people. Rich in history and culture dating back thousands of years, the country is today one of the largest economies in the world, as well as an emerging regional power.

Stretching across a vast region in Southern Asia, the country is rich and diverse in culture and tradition.

Some of the most important tourist attractions of India are:

New Delhi – Delhi is the capital of country and home to many historical, cultural monuments. The city has a vibrant and diverse population, from all corners of the country. It is one of the most visited cities in the India, as well as one of the most popular. Some of the places in the city to visit include the Lotus Temple, Qutub Minar, Red Fort, Akshardham Temple and India gate. 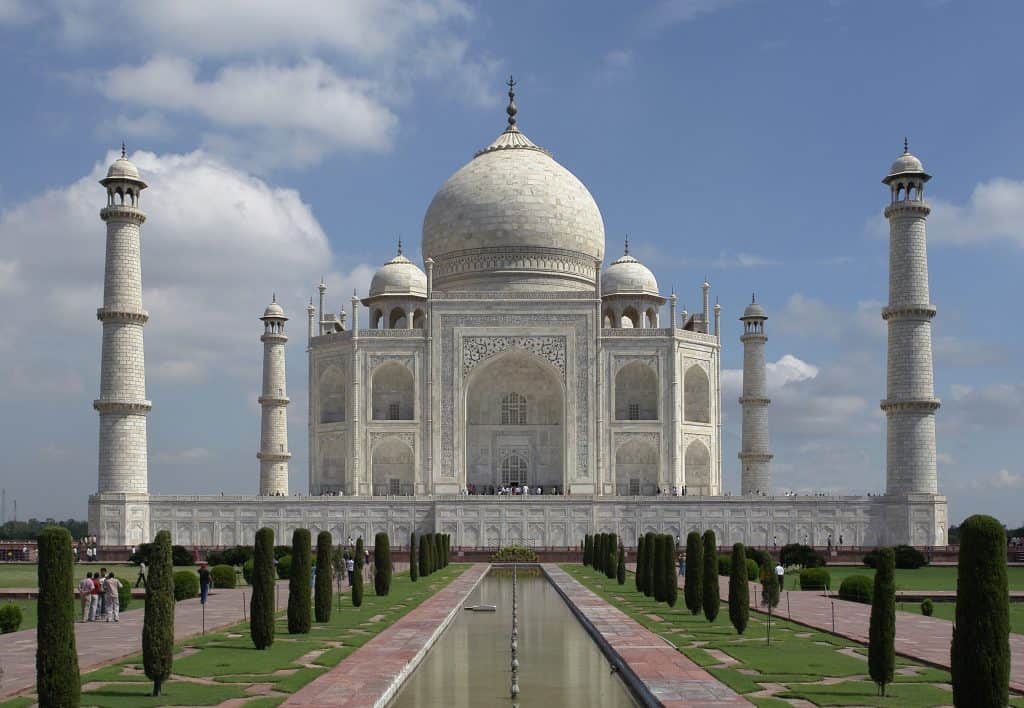 Goa – Goa is the biggest beach destination in the country, as well as an important cultural center.  A state in Western India, more than 2 million tourists visit Goa each year for its rich nightlife and shopping.  The beaches of Goa, such as Baga and Calangute offer parasailing, boat rides, jet-skiing to tourists. There is a strong influence of the Portuguese in the architecture of buildings in Goa due to its history of colonial rule that lasted about 450 years. It also has several historic buildings like the Bom Jesus Basilica.

Northeast India – This is one of the most unique regions in the entire country, and home to some of the most diverse cultures on earth. Known for its seven states, also called the ‘Seven Sisters’, the region is famous for its cultural heritage, vast mountainous landscapes, the Himalayas and more. The place is also home to some of the rarest creatures on earth, such as the Indian Rhino, which can be found in places like Kaziranga.

Andaman & Nicobar Islands –The island chain is part of the Indonesian archipelago, and one of the most remote regions of India. Situated near to Myanmar, Malaysia and Indonesia, the island chain is rich in jungles, wildlife and several historical monuments.

In all, Asia is an excellent destination if you are planning your next vacation.And you have more than enough top Asian cities to visit with kids.

The countries mentioned in the list are but a rough idea of the treasures that this vast continent has to offer, and let you know that there is more where this came from.

With a variety of places, cultures, food and more, this is one continent that you should spend your time exploring at least once in your lifetime.