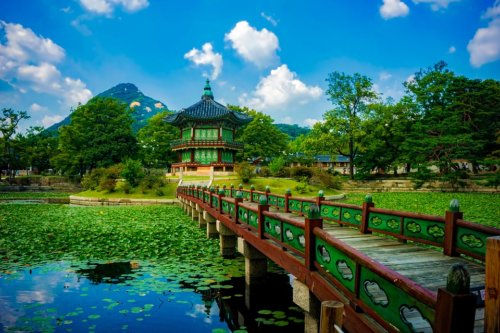 After a bit of jet lag and 18 hours of flying across the world, I was ready to plop my bags down in my South Korean apartment and rest a bit before beginning a year of teaching English in the southeastern city of Daegu. However, it only took a couple weeks of getting accustomed to new foods (perfectly-grilled Korean barbecue and spicy fermented cabbage known as kimchi) and miming my way through new interactions in Korean before the travel bug stung me once again.

I made the trip to Seoul with a couple of teacher friends to explore one of the oldest and most beautiful palaces in all of Korea.

Little did I know it was only the beginning of discovering the heart of the nation: centuries-old temples and palaces, like time capsules sprinkled throughout what’s sometimes referred to as the hermit country, just waiting to be opened up again.

The very first palace I visited in Korea after living in the country for only a couple of weeks was Gyeongbokgung Palace (경복궁), and it was one of my favorites. 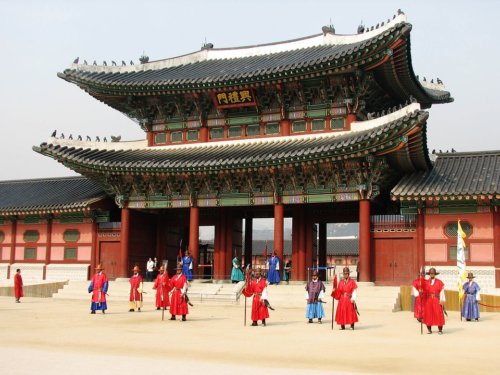 Perhaps misleading by its name, Gyeongbokgung Palace (경복궁) is not a single palace, but rather a wide expanse of palace grounds including gardens and private quarters, in addition to the main palace structures adorned with extraordinarily ornate facades, mimicking the pagoda designs of Chinese imperial architecture. Rich gold, red, yellow, and turquoise hues decorate each level of the palaces. There, visitors can wander among carefully planted flowers, tranquil bridges, and within the palace sanctuaries themselves.

Gyeongbokgung Palace, built in 1395, is also referred to as the Northern Palace among a group of four other palaces spread throughout the country, of a similar style and time period. However, Gyeongbokgung Palace is often thought of as the most beautiful of all of these. During the Japanese Invasions spanning from 1592 to 1598, the palace grounds were nearly completely burned to the ground. However, between 1852-1919, during the reign of Heungseondaewongun, the grounds were restored. The National Palace Museum of Korea and the National Folk Museum are located just at the perimeter of the palace gates.

Entrance: The palace grounds are open every day of the week except Tuesdays. Opening hours are from 9 a.m. until 5  or 6 p.m.,  depending on the time of year. Last admission is one hour before closing. Admission fees for international visitors are 3,000 won for adults (roughly $3) and only 1,500 won ($1.50) for children 18 years and under. Integrated ticket packages are also available, including access to four palaces: Changdeokgung Palace (including Huwon and the Secret Garden), Changgyeonggung Palace, Deoksugung Palace, Gyeongbokgung Palace, and Jongmyo Shrine. Tickets are 10,000 won.

Why it’s a Must: Perhaps what’s most striking about the palace grounds over 600 years old is that they sit just beyond the frenzied energy of Seoul down below, the capital of Korea and the 16th largest city in the world.

Visitors who hope to make the most of their time in Seoul can see the palace during the day and head into the bustling city at night. Seoul is a city of lights, markets, and rich cuisine that still booms into the early hours of the morning. Between shopping, kids’ museums, and the biggest variety of local and international food in the country, you’re sure to find something that fits the whole family’s interests. Find out more information by clicking here.

While Seoul is one of the most visited cities in the country, Korea also has a lot to offer down south. In fact, the city I called home for a year, Daegu, is the fourth largest in the country with a population of over 2.5 million, and has many more impressive temples and palaces for travelers to discover, dating back to dynasties many centuries ago. While I spent a lot of my day-to-day routine in the city, I always welcomed day trips beyond the city limits to find out what made each of these temples so special. One of the most important temples in Daegu is Donghwasa Temple (동화사(대구). About 22 kilometers north of Daegu, Donghwasa Temple is located on the south side of Palgongsan Mountain. 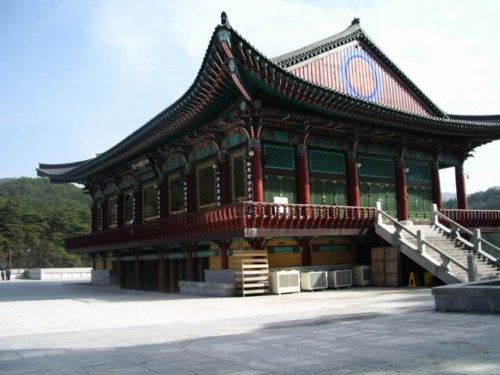 Although the temple was originally built under the direction of Monk Geukdal in the 15th year of King Soji’s reign, the temple was most recently rebuilt in 1732. The beauty of Donghwasa Temple is found not only in its intricate rooftop designs adorned with gold leaves, but the views from Polgangsan Mountain.

How to Get There: Tourists arriving in Seoul can take the train from Seoul Station to Dongdaegu Station. Then, take the Express Bus No. 1 and get off at Donghwasa Temple Bus Stop about 45 minutes later. The temple is a 7- or 8-minute walk beyond the bus stop.

Why it’s a Must: Visiting Donghwasa Temple is especially unique for visitors who decide to participate in an overnight temple stay. The concept may be new for people who have never traveled to Korea, but in fact, they’re fairly common. Temple stays are a retreat-like experience to pull back from the distractions of daily life and learn about a new sense of tranquility through meditation built on Buddhist principles. Visitors learn how to eat healthier, pick up on Buddhist etiquette, interact with local monks, and ultimately find a simpler way of being. Special programs include forest-walking meditation, a tea ceremony, and lunch gongyang. Though the principal website is only available in Korean, tourists can also get more information by clicking here.

This is hands-down my favorite temple in Korea, set in one of my favorite cities. Busan is the second largest city in South Korea, with a population of 3.6 million, or 4.6 million including the metropolitan area. Busan is most famous for its booming industries, sometimes referred to as “The Southeast Economic Zone.” Situated along the coast at Korea’s southeast corner, Busan is just a short plane ride or slightly longer ferry boat ride away from Japan. After hosting such international events as the 2002 Asian Games and the APEC 2005 Korea, as well as the 2002 FIFA World Cup, Busan is making a name for itself on a global scale.

Among several trips I made to Busan throughout my year in Korea, my visit to Haedong Yonggung Temple was undoubtedly among the highlights. It’s a hidden treasure that redefines the norms of temples in Korea.

Haedong Yonggung Temple was originally built in 1376 by Naong (a renowned Buddhist teacher) during the Goryeo Dynasty. The grounds of the temple include Haesu Gwaneum Daebul (Seawater Great Goddess Buddha), Daeungjeon Main Sanctuary, Yongwangdang Shrine, Gulbeop Buddhist Sanctum (enclosed in a cave), and a three-story pagoda. Four lions that sit in front of the pagoda represent joy, anger, sadness, and happiness. To get to the base of the temple, visitors will descend 108 stairs adorned with traditional Buddhist statues and good luck omens. New Year’s Day is the most popular time to visit the temple. 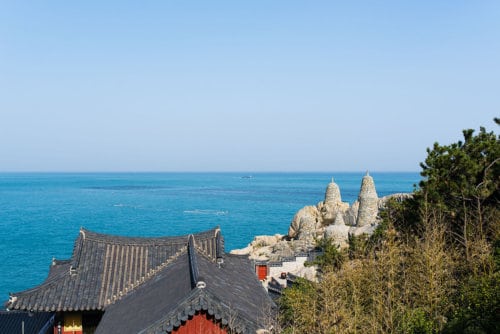 How to Get There: The easiest way to get to the temples is to take the metro until Haeundae Station (Busan Subway Line 2), and exit at Exit 7. Then, take Bus 181 and get off at Yonggungsa Temple Bus Stop.

Entrance: The temple is open from 5 a.m. until sunset each day, and admission is free for all visitors.

Why it’s a Must: Haedong Yonggung Temple is unique in that it’s set along the water, while most temples in South Korea are set up in the mountains. As visitors walk down the 108 steps, they’ll begin to hear the waves crashing up against the shore, just at the feet of the temple’s base. The special setting allows for great photo opportunities and a peaceful backdrop.

In the evening, if you’ve still got energy left, check out some of Busan’s delicious seafood restaurants in the center of the city, along with the harbor and among towering buildings lit for the night.

A quick note for readers wondering the best time to come to South Korea: South Korea’s weather can be a bit frigid in the winter, and ranges in summer depending on the region. The best time to visit Korea is during the mild weather of late spring and early fall to soak up all this nation has to offer. The greatest temples and palaces Korea has to offer is an experience the whole family can enjoy together.