Best Things To Do And See In Slovenia

Slovenia might not be very high on travelers’ dream destination lists, but that is only because it is yet to be discovered. It has everything for a person who is seeking an offbeat experience. There are caves, rivers, caves with rivers, rivers in amazing colors, mountains, mountains with dense green forests, and wait for it- a super happening capital. There is food, history, and a language to indulge all the other senses.

Let me tell you the story of how I chanced upon this Neverland and have been hopelessly in love ever since. Most people visit a country once or maybe twice. I, on the other hand, have visited Slovenia 2.5 times. That’s right.

As clichéd as a movie, it began with love at first sight. When I was on my Student Exchange Program in Europe, plans were ad-hoc and the power to jump on any train with a Eurail Pass added fuel to this madness. While travelling in Switzerland, we decided to stretch our trip and visit Croatia! Not denying we were greedy, but YOLO (you only live once), you know? We hopped on a train. At around 6 a.m., a friend of mine woke us up to look at the view outside. What could there be new? After two months in Europe, I thought I had seen it all. Apparently, there is no end to it.

There were perfect fields with perfect cut roads and houses in the farms with cars and trucks. Nature and technology coexisted here. Then, there was a green stream flowing alongside the railway track. And on the river, there was a thin wisp of mist adding an  otherworldly element to it. We were shrieking, “Woah” every two minutes. There was a solitary castle somewhere, and a small pool with green water. After sometime, everyone went back to sleep, but I stood there staring. My first thought was, “no wonder there is ‘love’ in ‘Slovenia’.” And I clearly wasn’t the first person who had thought about it, as the phrase is often used to promote Slovenia tourism.

I went back twice to Slovenia after that 0.5 trip across the country in the train. I will try to convince you  why you should go too, and share what you can do there. However, sometimes, words deceive me. They do not help me convey the beauty I saw that day.

Like I said, Slovenia is not the first or maybe even among the top 10 places that cometo travelers’ minds hence, the first question to answer is where is Slovenia located? It is almost a land locked country, sharing borders with Austria, Italy, and Croatia. It has a coastline along the Adriatic Sea near Italy. But there is enough blue in the country because of the criss-crossing rivers- 59 of them to be precise!

Before you pack your bags, I must share the tragedy that happened with me on both of my full trips to the country. The first time I went there in the winter of 2014, Slovenia had been struck by a flood, trees were uprooted, and rivers were running wild with mucky water. Disappointment was accompanied by the discomfort of rain showers during my stay. When I went again in 2017, there had been heavy rains in the past week, so again the river Sava was flooding and the view from the train this time was not as pristine because of the muddy waters. I have learned to check the weather before I venture there the next time, and there will be a next time for sure. Another lesson I have learned is that Slovenia wins for the natural beauty more than for its cities and towns. I had been to Maribor earlier in my attempt to be wild and land on a random place in the country of my choice. While it is a pretty town, I would skip it the next time. Maribor does have the oldest grapevine in the world and the old vine house, but it pales before the natural treasures the country has to offer. But as always, I hold that it is great if the place you are visiting is beautiful, but what really makes memories is the people and you.

Slovenia is also a case study of what marketing can do and undo for you. Its neighbor, Switzerland, invests heavily in marketing, draws tourists from around the world, and has infrastructure such as at Mt. Titlis and Mt. Jungfrau to indulge tourists. Slovenia, on the other hand, has amazing natural gifts, but does not draw tourists on the scale of Switzerland, as it is not been in limelight internationally. It is contentious, but most would find Slovenia just as beautiful as Switzerland. Also, there is decent infrastructure for tourism in Slovenia, and the Tourism Board has campaigns for promoting it, but sadly, word of mouth has not gotten very far.

Ljubljana– Pronounced as “Lubyana.” This is the capital city of Slovenia. It has buzzing marketplaces with people playing music and sometimes even dancing in the city center. There are many cafes alongside the Ljubljanica River that flows through this city. Food is great here, and multiple cuisines are available. Must try items are “Rota Soup” which is a cabbage and bean based sour soup, and Strukliji rolled cakes. There is a huge park called Tivoli Park where you can relax. There is an amazing nightlife with bars and organized pub crawls. We rode around the city on bicycles, and it was a lot of fun. 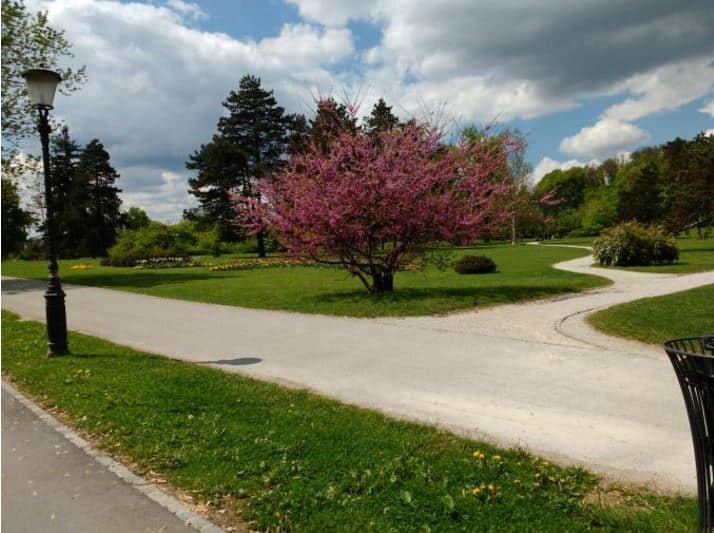 Lake Bled– It is a beautiful lake with an island in the center of it. It is a 15 minute hike to Bled castle on hilltop, and a 10 Euro ($11.12) admission fee to catch a view of the lake. I personally found the lake overcrowded and overrated. 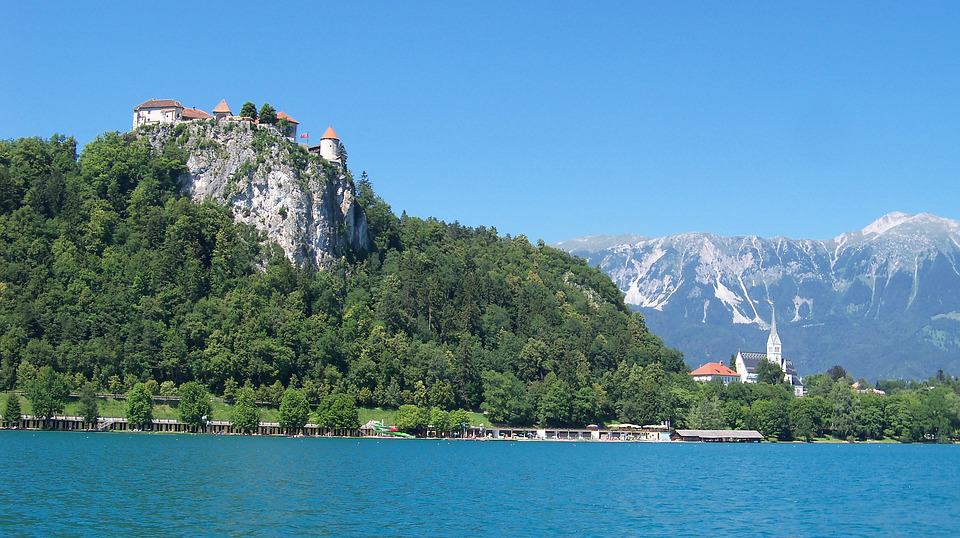 Skocjan Caves– It is in Divaca area, and is accessible from Ljubljana by train and bus. This is a massive cave system, and has the river Reka flowing through it. The sight of the river gushing through will give you goosebumps. Recommended! 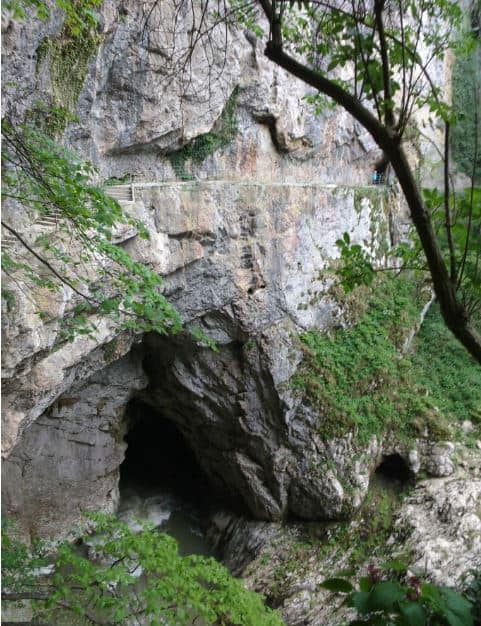 Postojna Caves– A more touristy brother of Skocjan, this is also a massive cave system. It has a mini-train to show you around. It is easily accessible from Ljubljana. I would personally recommend Skocjan over Postojna because of the river flowing there.

Predjama Castle– Very close to Postojna Caves is this castle built at the mouth of a cave. While it is a beautiful sight and must visit if you are going to Postojna anyway, but there is nothing much to see inside.

Vintgar Gorge– Just 4 kilometers (2.48 miles) away from Bled is this trek in the Triglav National Park. It has a beautiful gorge carved by the Radovna River. The green waters, rapids, and waterfalls are beautiful. Highly recommended! 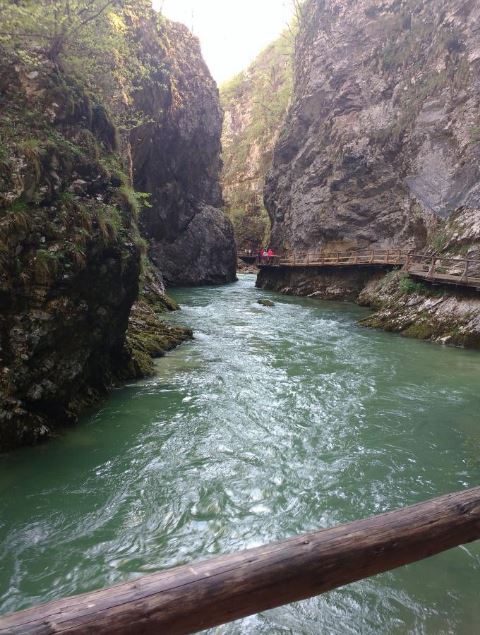 Soca Valley– This is a hidden treasure, Slovenia’s best kept secret, available only to those who care to venture out of the tourists’ safe havens. The river Socaor Isonzo flows from the Julian Alps through the western region of Slovenia. We went for a road trip by car to Tolmin town. The drive was spectacular with lush green mountains. 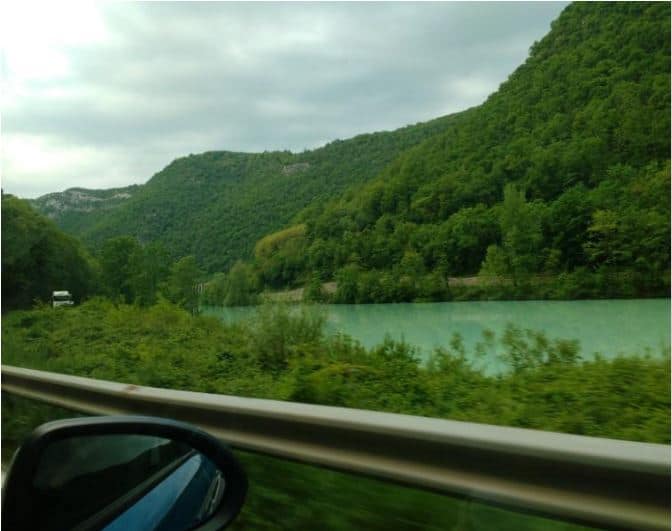 On our way from Ljubjana to Tolmin, we used the 102 Highway which runs along River Idrijca. This river is beautiful and green.  On our way back, we took the 103 highway, and it ran alongside river Soca. Soca River has a beautiful emerald green color or as I call it, “bluish-green creamy color,” and is the only river in the world which retains its color throughout its length. This is mostly due to the limestone in the region. On our way, we stopped at the Bovec Lake, which had barely 20 people there, and a little town beside it. This beautiful lake looks like an emerald mirror. There are also many adventure sports options at Tolmin to enjoy besides the drive itself. You can easily find these routes on the map of Slovenia or navigate using Google Maps. This is a must do trip! 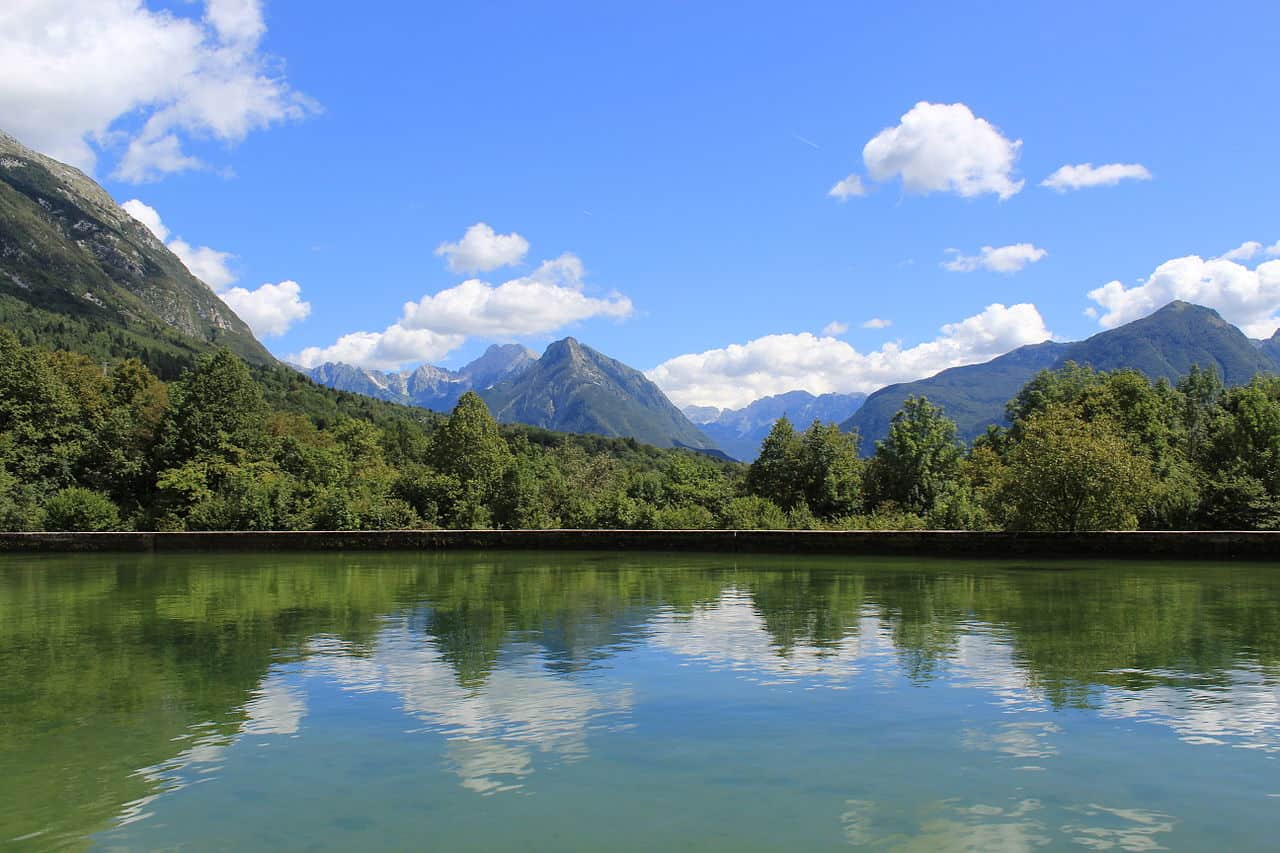 Trip around Sava River– I could not do this trip, but my first glimpse of Slovenia, I found out, was basically the route alongside Sava River. You can start from Villach in Austria and travel through Jesenice in Slovenia, preferably in early morning to catch the mist over the river. This can be done by car or by train.

Currency of Slovenia– Euros are accepted everywhere in Slovenia.

Language of Slovenia– Slovenian is the official language, and “zdravo” is how you can say Hello in Slovenian. But don’t fret, people do know how to speak in English pretty much everywhere.

Drinking water– Water from taps is potable in Slovenia.

Student friendly town– There are special discounts for students in many restaurants.

Cheap Cycles for renting– The rental for bicycles is 2 Euros ($2.22) for 2 hours. They are easily available at Slovenia Tourism Centers in Ljubjana.

Idea itinerary for a 3 day trip

Base yourself in Ljubjana, due to its connectivity and central location. On the way from Austria to Slovenia, you can enjoy the route along Sava River.

Day 1– Enjoy daytime in Ljubjana, Skocjan caves/ Postojna Caves, and Predjama Castle. Do check the hours of caves as they shut dow in the early evening.

If you get a chance, just go! Go before everyone finds out!