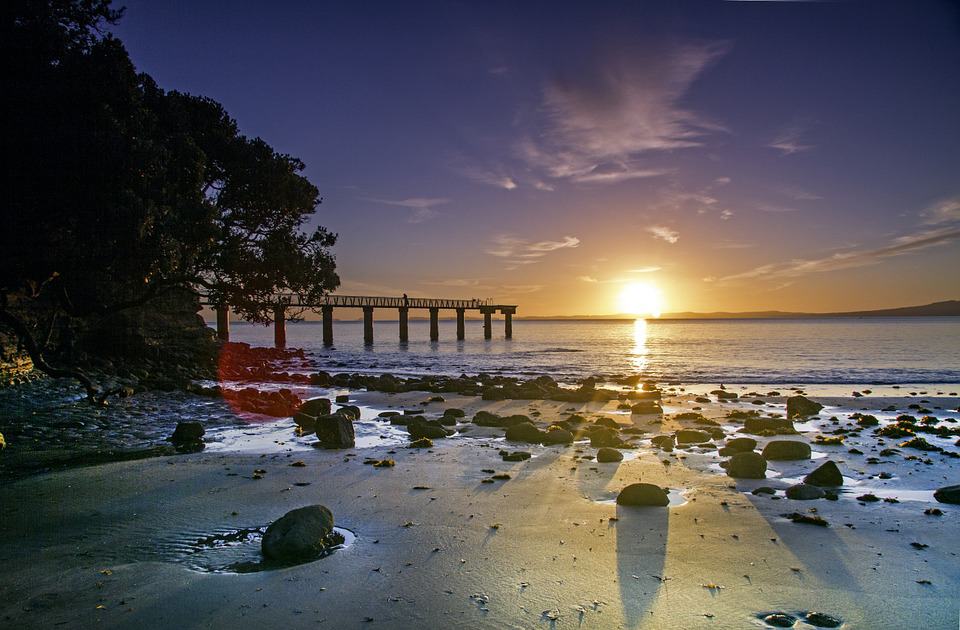 A great place to start your New Zealand (NZ) holiday is Auckland. Not only is Auckland New Zealand’s largest and most cosmopolitan city, it is also the largest Polynesian city in the world. There are more than enough things to do in Auckland to keep a family occupied for quite some time. Also, a bonus is that some of the best things to do with children in Auckland are free or cost very little. Getting there is easy, as Mangere is New Zealand’s largest international airport, so start planning your New Zealand vacation now for a fun time.

1. Auckland on the Pacific Rim of Fire

One of the first things you should know about Auckland is that the largest city in New Zealand is built on a whole lot of volcanoes, 48 cones to be exact. Of course, when the first Europeans began living in the area less than two hundred years ago, they had no idea they were living on dormant volcanoes. The last time there was any eruption was hundreds of years before. All the volcanoes are still sleeping, but they do contribute to Auckland’s unique landscape with small volcanic peaks and islands dotted everywhere. 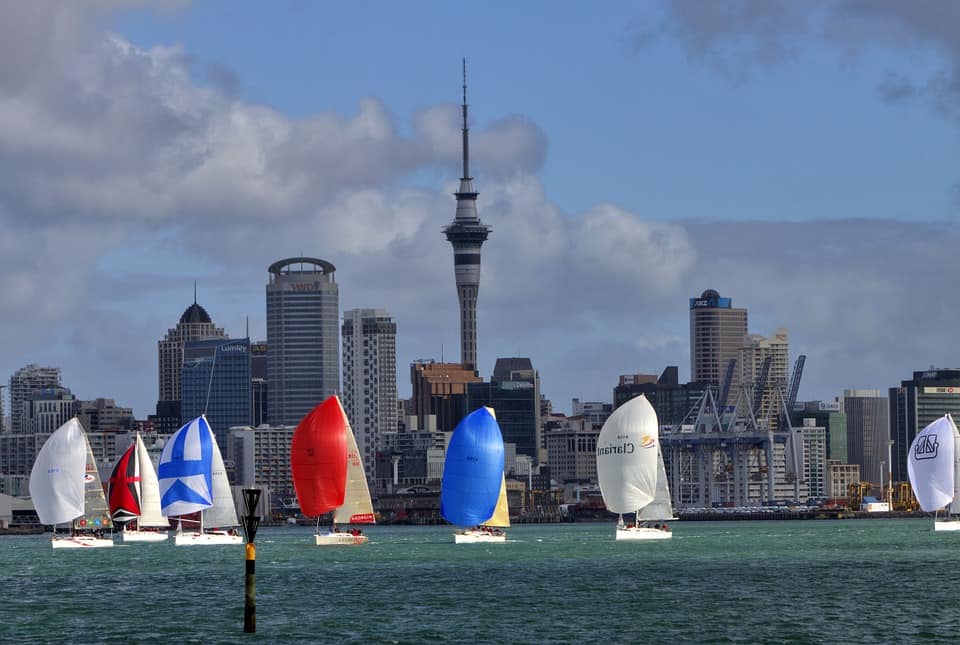 Boats sailing on Auckland Harbor with the Central Business District in the background, with the skyline dominated by the Skycity Skytower.

One of the most distinctive peaks is the youngest volcano, an island in the Hauraki Gulf called Rangitoto. There are a number of ways to get to Rangitoto, and one of the most fun routes for an active family is to hire a kayak and paddle there. However, you can also get there by regular ferry, which takes about 25 minutes from downtown. Once on the island, you can trek across ancient lava flows and up the summit to take in the expansive view back to Auckland City, the “City of Sails,” and all around the Hauraki Gulf.

2. A Tower with a View in Skycity

From Rangitoto Island,you can see the Auckland Sky Tower dominating the skyline as the highest free-standing tower in the Southern Hemisphere. A visit to the Skytower in Skycity is often on the list of best things to do in Auckland. So when you get back to the “Mainland” (as New Zealanders call either the North or South Island),head there for another great view. The Skytower has a glassed viewing deck high up at over 320m and once you are up there, you can “grab a bite to eat” (a very NZ saying) and enjoy the 360oview. 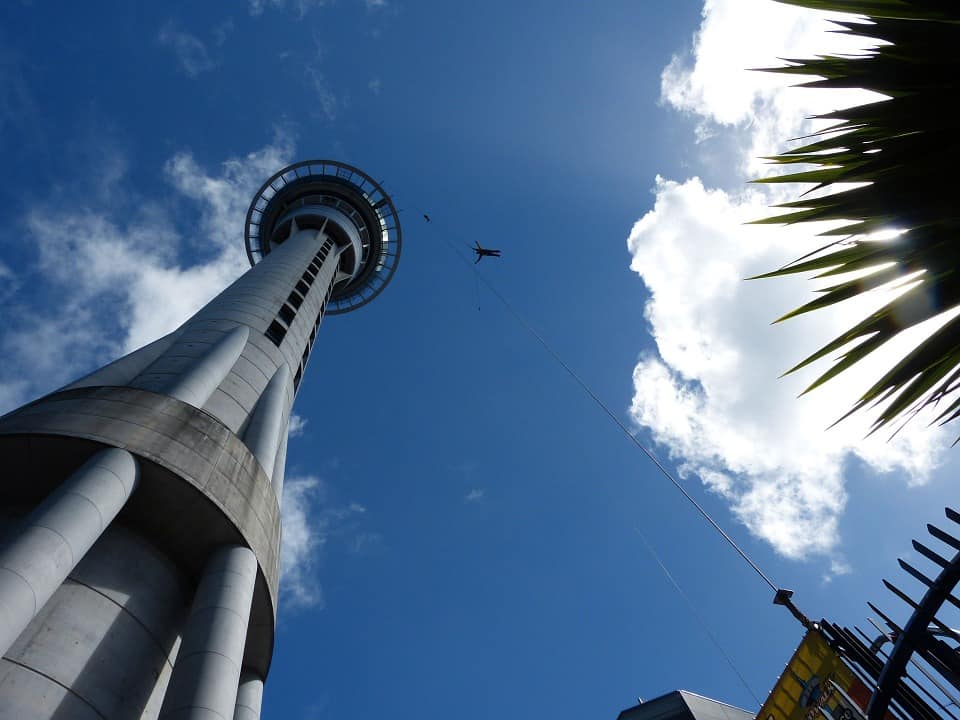 A jumper leaps off the Auckland Skytower to fall the 220meters(721.78 feet) on a bungee line.

You might even be daring enough to take a walk outside the tower on the Skywalk where you are attached by strong karabiner and rope, or even leap off into the air in a 192meter (629.92 foot) Skyjump! If all that excitement was not enough, you can keep the adrenalin runningin the Skycity Casino at the Skytower base. The Skytower is also a great place to take children, especially three times a year during school holidays when they run programs especially for children.

3. Life is an Auckland Beach

Some of the best things about a holiday in Auckland are the beautiful beaches everywhere. You and your family can easily spend a relaxing day building sand castles or cooling off in the clear water. Most beaches are easily accessible, especially if you are travelling by car. On the East Coast, the beaches are all light colored sand with relatively sheltered coastlines and calm waters for swimming and other water sports. 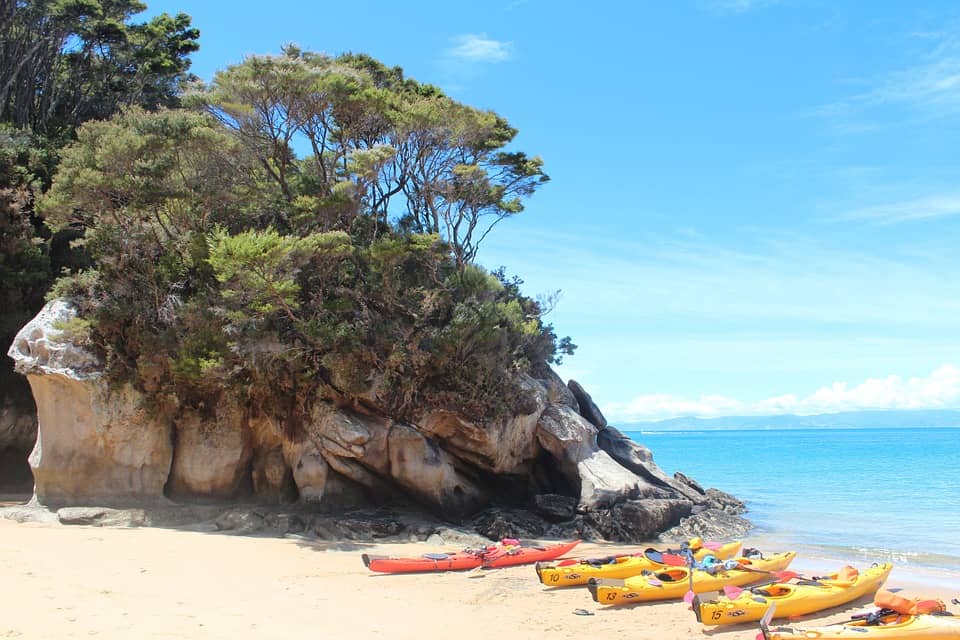 Kayaks on the North Shore beach waiting for some summer fun.

Auckland has a harbor bridge so that commuters can easily get from south to north and vice versa, so Aucklanders often talk about the North Shore to specify any place north of the bridge. There are two popular city beach areas on the North Shore: one is at Devonport where ferries also cross the harbor to Auckland Central, and the other is a more expansive beach at Takapuna which looks out to the previously mentioned Rangitoto Island. South of the bridge there is Mission Bay on the edge of a vibrant up-market suburb, with trendy restaurants serving delicious food and likewise St Heliers.

If rugged coastlines and stronger winds are more your style, then head to the West Coast’s black sand beaches of Muriwai and Piha for surfing and body boarding. But be aware that these beaches have rips and strong currents, so more care is required.

Walking in New Zealand’s nature is fun and interesting. Auckland is established on a very narrow part of the north of the North Island so many areas are surrounded by water. You can even walk from the east coast to the west coast along a marked trail through the city, parks, reserves, and rural areas. It’s about 16 kilometers (9.94 miles) long so it takes less than a day to wander along. There are no dangerous animals, except for a couple of spider species that prefer to hide away from humans. 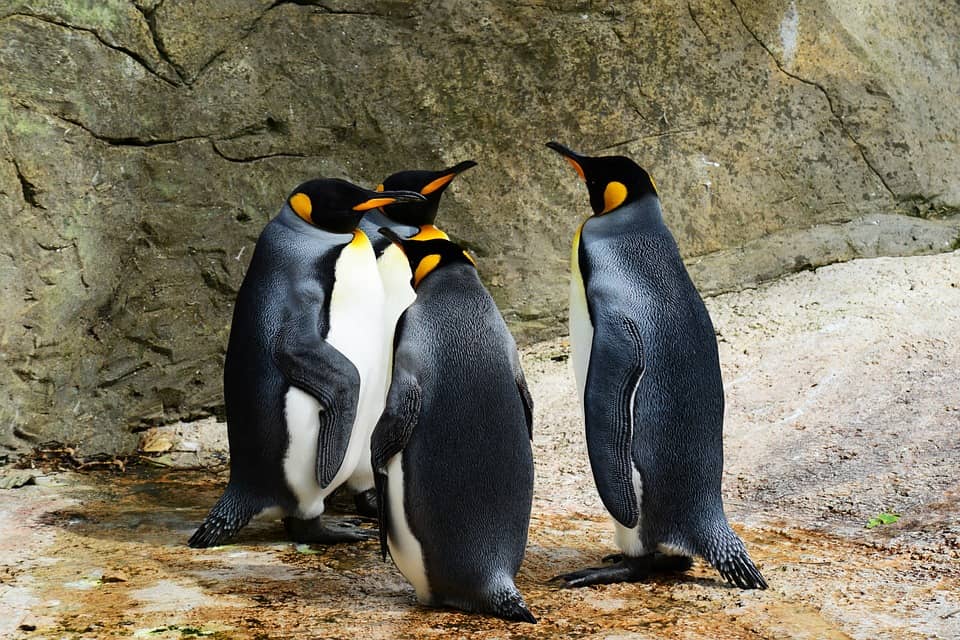 King penguins are some of the creatures found at Kelly Tarlton’s Penguin experience.

Aquatic and marine life are abundant everywhere, and there are opportunities to see marine animals such as dolphins and orca in Hauraki Gulf. If you want to check out native creatures and exotic animals, there are well maintained Auckland and Zoo and Kelly Tarlton’s Sea Life Aquarium.

Kelly Tarlton’s Sea Life Aquarium is a world class facility that allows you to get close up and personal with NZ’s marine life, including sharks, stingrays, and lots of other colorful fish. Walking through underwater glass tunnels, you really get the feeling you are part of an underwater world. 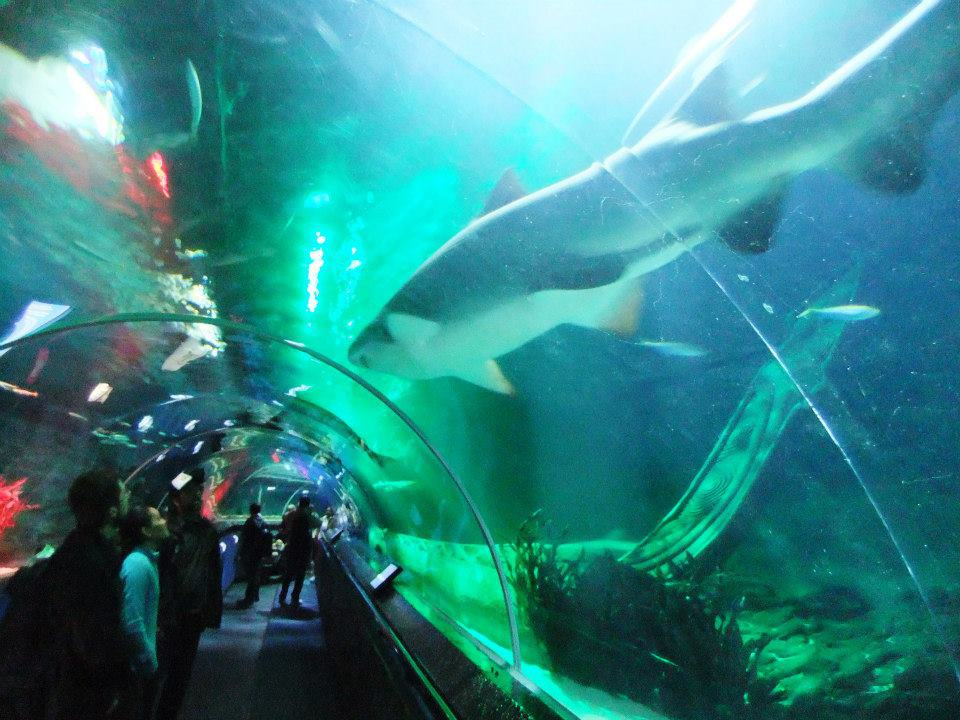 You can time your visit for the feeding frenzy and even take a dive with sharks to come face to face with a mouthful of teeth. There is also an extensive display ovarious species of penguins that are found around NZ’s coastline and further south in the Antarctic. At Kelly Tarlton’,s you can share a snowy enclosure with some of them for a truly chilly experience. If you are planning a visit, I suggest you book online for substantial discounts for various activities and midweek deals.

Modern Auckland is a very multicultural city, situated on the edge of the Pacific Ocean with influences from many parts of the world. New Zealand was originally populated by Māori, became a British colony for some years, and is now home the largest Polynesian mixed population in the world, also with Asian immigrants from Japan, China,India,and other countries. Auckland reflects a melting pot of people coming together to give the city and New Zealand a unique culture and way of life. 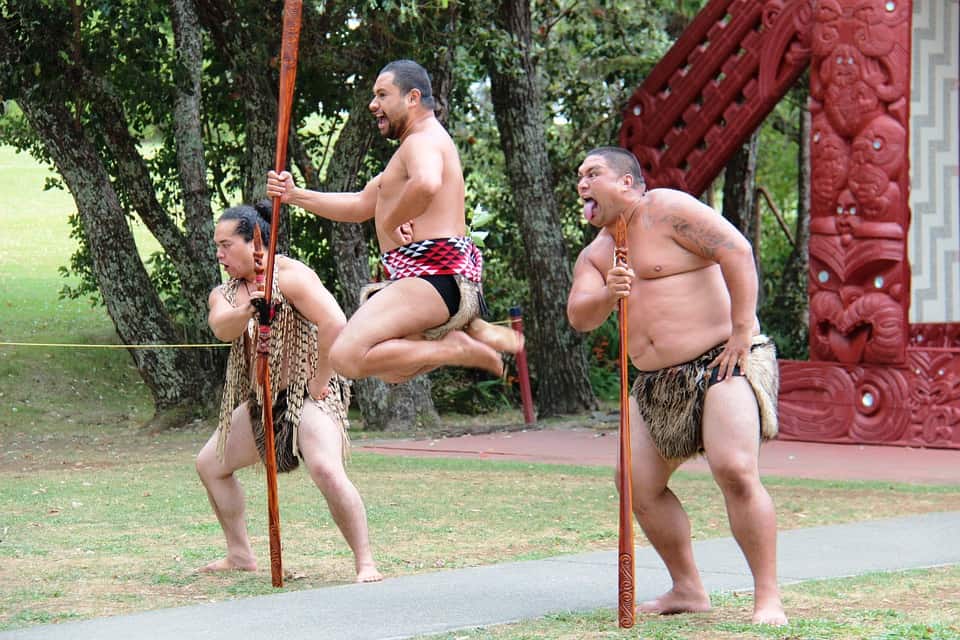 Throughout the year, there are various festivals and events reflecting these diverse influences, such as the Auckland Lantern Festival at Chinese New Year, Diwali Festival, and Pasifika. Pasifika has been celebrated annually for over 25 years, and should not be missed if you are lucky enough to be in Auckland in late summer each year. Entry is free, and hundreds of groups perform live, thousands attend, and there are stalls selling all sorts of food and wares for all the fun of the fair.

6. Māori and English are National Languages

If you are wondering where all these strange sounding place names come from, they are names given by the Māori, the indigenous people of Aotearoa New Zealand. Māori is one of two official languages of Aotearoa New Zealand, along with English. It was originally an oral language, so you can easily learn to pronounce the names as they written phonetically. If you want to learn more about Māori and their language, plan a visit to the Auckland Museum, which has the world’s largest collection of over 1,000 Māori Toanga – treasures. You can explore a marae – (meeting house) and a waka (canoe) to catch a glimpse of traditional Māori life.  The Auckland Museum also has many other fascinating interactive galleries to explore, so it’s a great place to spend a rainy day. On that note, Auckland has a subtropical climate, so rain is not rare.

7. New Zealand has Many Places to Explore

I am sure you could spend weeks exploring just Auckland however, there are so many wonderful places to visit in other parts of Aotearoa New Zealand. From Auckland, you could head north to the Bay of Islands and the magnificent Kauri tree forests of Northland. 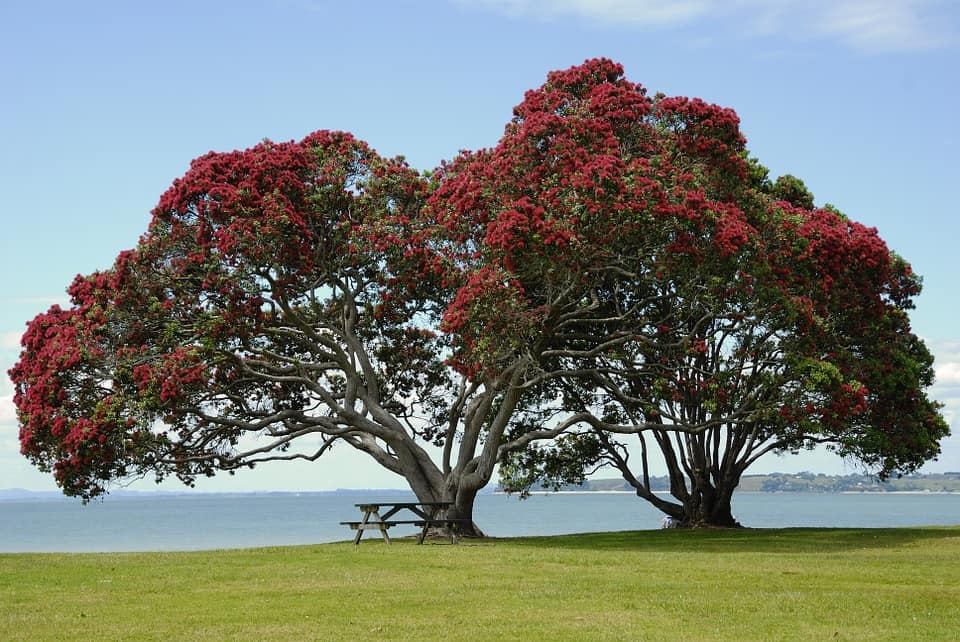 Or you could head south to active volcanoes and thermal areas in Central North Island, and then cross the Cook Straight from the NZ’s capital, Wellington to the South Island where more spectacular scenery is to be found. Wherever you travel in New Zealand, there will be many fun things to do, so happy travels.