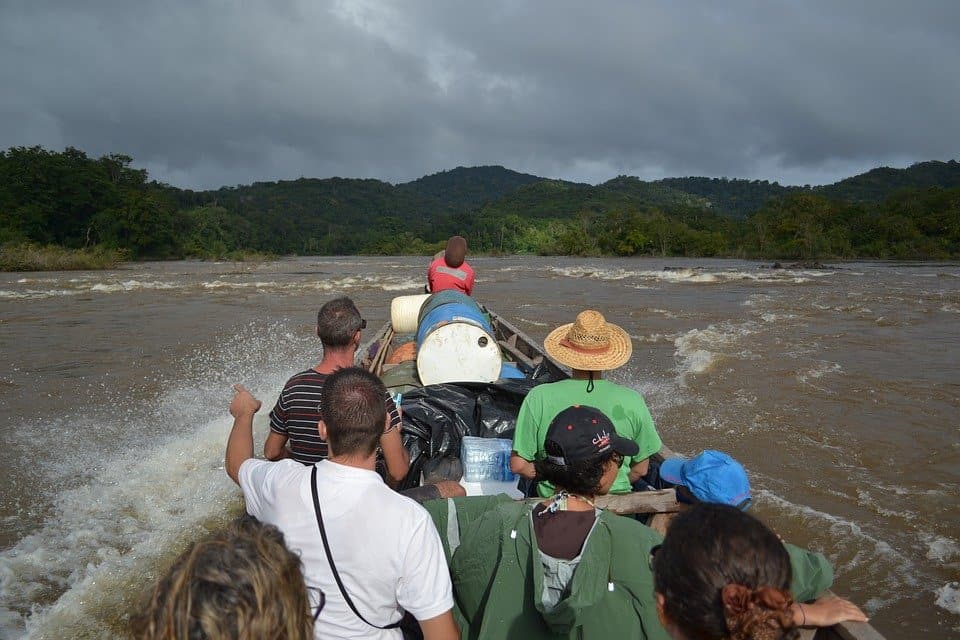 Home to sprawling rainforests and several incredible beaches, Guyana is one of the most biodiverse nations on Earth. The nation is steeped in British colonial history and combines the best of a myriad of cultures. Families vacationing in Guyana marvel at the confluence of British, Caribbean, Indian, and indigenous cultures that can only be found in this small South American nation!

If you’re looking at Guyana for your next family vacation, you’ll want to know as much as possible before departure. This guide seeks to answer questions you may have about Guyana and Guyana travel, and introduce you to ten of the hottest locations to take your kids when you’re there.

Where is Guyana Located?

Not sure where to find Guyana on a map? We’re here to help! Located on the northeast portion of the South American continent, the country is flanked to the east and west by Suriname and Venezuela, respectively, with the southern portion of the nation bordering Brazil, and the northern tip touching the Atlantic Ocean. Here’s a map of Guyana to get a better idea.

Importantly, Guyana is not to be confused with French Guiana—which boasts a different colonial past, traditions, and culture. Historically, Guyana was part of the larger British empire, from which much of its present-day culture derives. French Guiana is a state to the east of Suriname that, as the name implies, is an overseas territory of France.

The flag of Guyana is made up of five red, yellow, and green triangles with symbolic meaning. Specifically, red indicates a commitment to reform, yellow symbolizes wealth, and green represents the natural forests which make up a large part of the Guyana state. 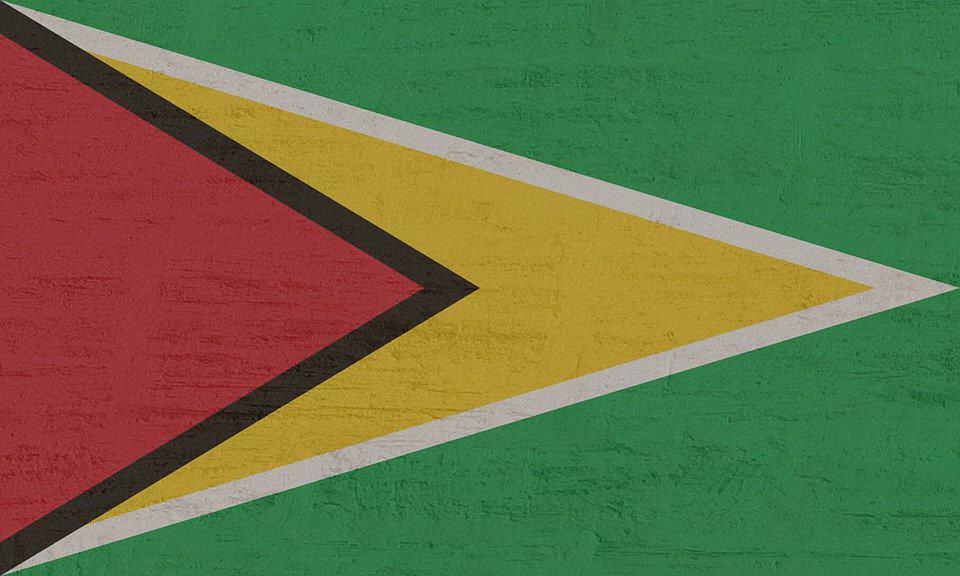 There is only one time zone in Guyana, the Guyana Time Zone (GTZ), which is four hours behind Universal Coordinated Time.

What Is the Capital of Guyana?

If you plan on visiting Guyana, you’ll likely spend significant time in the capital, so it’s time to get familiar with it. Georgetown, a seaside city with a population of 200,500, is the capital of the nation and the largest urban center in the country. Alternatively known as the Garden City of the Caribbean, the city is alive with activities and rich Caribbean food. What’s more, the city makes up a large portion of the country’s population, which rests only at about 778,00 total.

What Language Is Spoken in Guyana?

Those reading this will probably find Guyana more accessible than other South American nations, and the reason is simple. As the only nation in South America with English as the official language, English-language tourists aren’t required to learn a foreign language to get around.

How to get around Guyana

With all this being said, what’s the best way to get around Guyana? One of the least traveled countries in South America, Guyana is also one of the hardest to get around—no matter what mode of transportation you opt to take. For those with serious driving acumen, car rental may be the way to go, though you should know beforehand that driving in Guyana isn’t for the easily scared. Drivers in the nation are known to be reckless, especially after dark, and the roads aren’t very good in the first place. 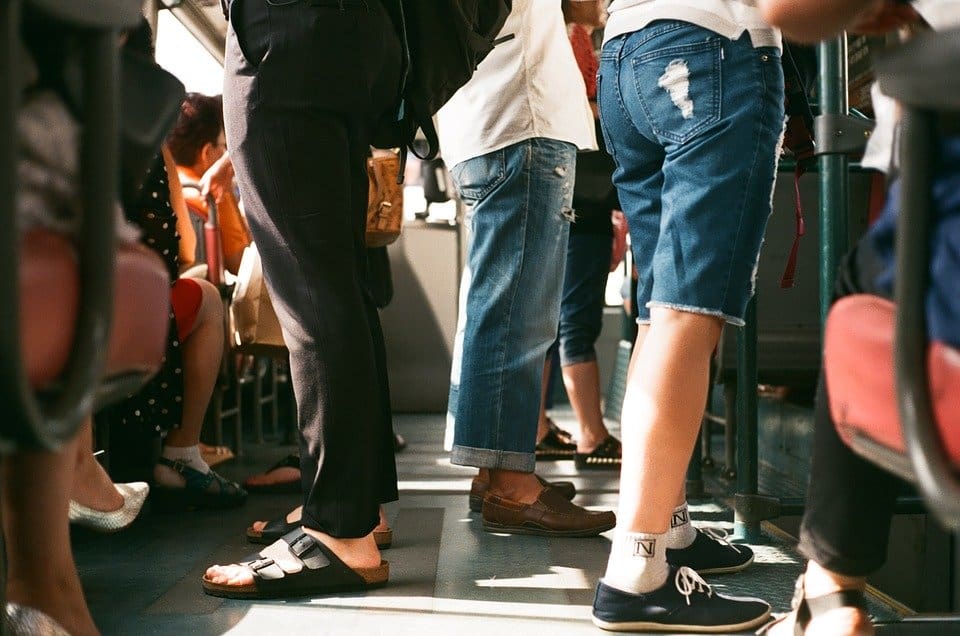 For most, this makes taking mini-buses the best option, though this option does come with its own dangers. Still, it’s likely that the drivers of these buses are more experienced than you are, which could make this a more attractive option for you—if you feel comfortable putting your wellbeing (and that of your family) in someone else’s hands.

While boating has been a popular option in the past, issues with piracy off the shores of Guyana make this a dangerous option of transport for most individuals and families. For those traveling to the interior of the country from the exterior (or vice versa), flying is one of the most popular modes of transportation, though planes are small and luggage is limited to 20lbs (9kg) of weight per person.

What Is the Currency Used in Guyana?

You’ll likely want to do a lot of shopping while you’re in Guyana, but just what currency can you expect to use? The official currency of Guyana is the Guyanan Dollar (GYD); the current exchange rates with major currencies are as follows:

If you’re planning to pay with a credit card, you will have little difficulty at major restaurants, hotels, and tourist centers when using Visa, MasterCard, American Express, and Diner’s Club. There are a spattering of local restaurants and businesses that accept foreign visa cards, as well. Importantly, many inland lodges and other businesses that do not accept foreign cards do accept USD, so you’ll want to check with the business to see what currency options are available to you.

Best Time to Travel to Guyana

Of course, you’ll want to make sure you’re going to Guyana at the right time. Generally speaking, this is the period directly following the two distinct rainy seasons that occur in the nation (one at the beginning of August and the other at the end of February). This time sees a renewal of the expansive green forests and grasses and offers waterfalls at their peak display.

Most travelers find Guyana in September, October, to the end of November to be the most pleasant in terms of temperature and overall weather. This also represents peak tourism season in Guyana (along with January, February, March, and April), though you may find that tourists aren’t very common in the country no matter when you go. 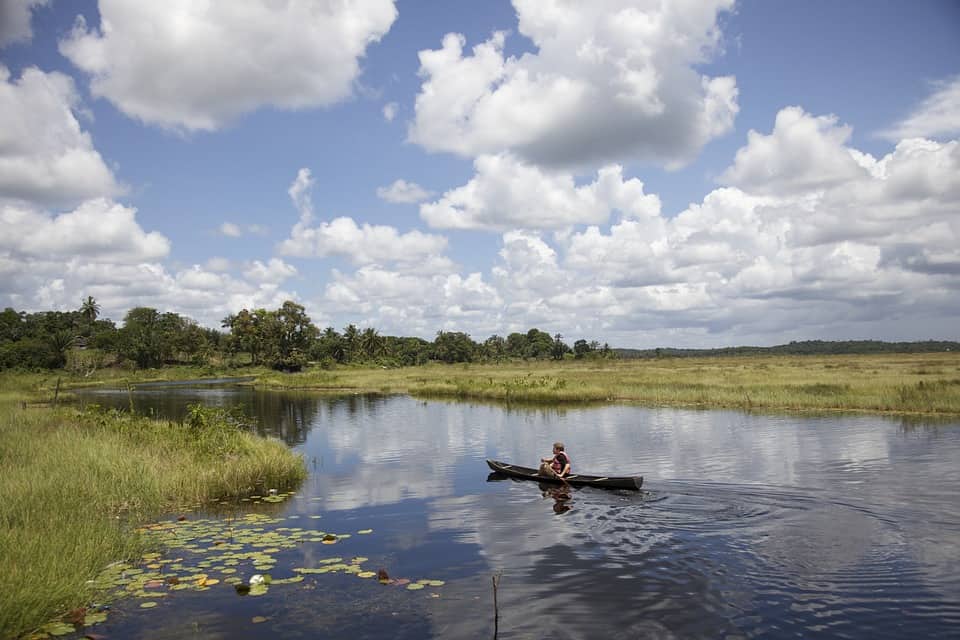 Is Guyana Safe to Travel?

The US Department of State advises travelers to “exercise increased caution” when traveling to Guyana. In certain regions of the country, particularly the Eastern region, violent crime is common. In crowded tourist areas, pick-pocketing does occur. For this reason, travelers should take precautions and stay only in tourist areas and only go out during the day. This is particularly true for families.

For best results during your vacation, follow these precautions outlined by the Department of State:

According to the UL Safety Index, Guyana boasts a safety score of 54/100, making it comparable to countries such as Ukraine (56) and Venezuela (56).

10 Best Things to Do in Guyana

We hope the above logistics give you a better idea of how to plan your trip to Guyana. In this section, we’ll go over ten of the best things to do while you’re there to have safe fun with your family:

A trip to Guyana is not complete without a visit to Kaieteur National Park. This national treasure is home to some of the most exotic animals in the nation, including golden frogs and brilliantly colored species of bird. Most importantly, however, the park boasts the world-famous Kaieteur Falls, a dazzling waterfall that’s surrounded by miles and miles of secluded Amazonian rainforest.

The park itself is nested in the Potaro-Siparuni Region and can be accessed by flights to Kaieteur International Airport. This scenic destination is well worth the travel it takes from the interior!

You’ll likely spend tons of time in the capital of Georgetown, so it’s important to know what sites in the city are best for families. This starts with St. George’s Cathedral, an Anglican church completed in 1899 that has been deemed a national monument in Guyana. The church boasts incredible Gothic architecture and is a great place to spend a quiet and reverent afternoon.

Easily the busiest place in all of Guyana, Stabroek Market is located in Georgetown and offers tourists a chance to participate in the best shopping the nation has to offer. Everything from produce to jewelry is sold at the market, which is watched over by an old clock tower that’s become a staple of Stabroek scenery.

4) Visit the Canopy of Iwokrama

See the sites (and the heights) by walking Iwokrama’s Canopy Walkway. This platform stretches 30 meters above ground, giving travelers a chance to see the amazing rainforest from an unbeatable vantage point. To make things even better, travelers may even get a chance to interact with climbing monkeys, birds, and other species that make the treetops their home!

5) Try Out the Local Food

Guyana boasts a large Indian population as a result of its British colonial history. As a result, much of the culinary influence on the nation’s cuisine comes from the Indian tradition, with popular dishes including curry made of duck, goat, chicken, lamb, and seafood. Metamgee is another popular dish involving dumplings cooked in coconut milk, offering travelers a unique Caribbean flavor that can’t be found anywhere else. Though the nation is located on the northeastern end of the South American continent, its food is largely considered to be part of the larger Caribbean tradition. 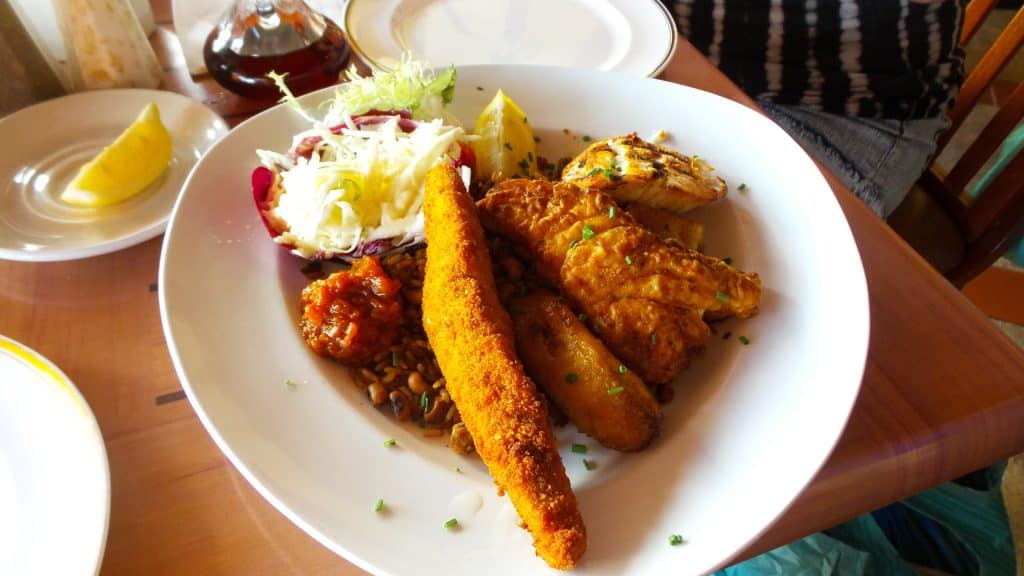 Visitors have loved the Guyana Zoo since it first opened in 1952, supplementing the botanical gardens that had existed in the location since 1895. Today, guests can enjoy the gardens and fantastic species such as manatees and harpy eagles. Without a doubt, this Georgetown-based zoo will be great fun for you and your family and will provide you with an incredible learning experience for your kids!

If you’ve got older kids and are into hiking, you’ll love climbing Awarmie Mountain. This scenic location provides a great view of the surrounding landscape and even offers you the opportunity to sleep on the summit in traditional Guyana-style hammocks. This is one bucket-list item that will have you looking and feeling like a native (plus it will be pretty cool to brag about with friends later). 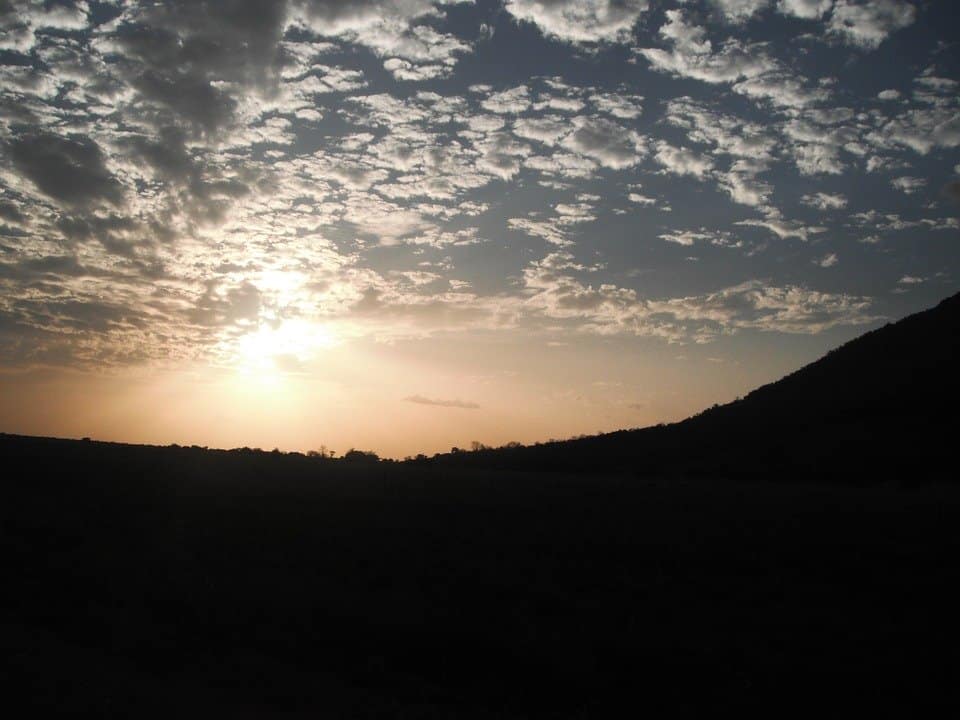 Want you and your kids to learn more about the rich history of this obscure South American nation? Then a trip to Guyana National Museum is in order! The first floor of this museum showcases the history of the museum and even includes a car from one of the former presidents of the nation. The upper floor features exhibits related to the natural history and unrivaled biodiversity of the nation. One thing’s for sure: you and your children will have a blast learning all there is to know about Guyana from this fantastic national museum.

Built to commemorate Guyana’s independence from the British Empire, Independence Square is a hotspot for both domestic and international travelers. The site contains an arch that was gifted to the nation by Queen Elizabeth II herself and boasts several incredible attractions such as the National Library that you’ll want to check out!

One of the best and most-visited attractions in Independence Square is Promenade Gardens, once a feared public execution square that has since been turned into an urban green-space complete with beautiful flowers, attractive plants, and scenic trees. The gardens have places to sit and relax, to read, or simply to walk around and enjoy the beautiful nature. You’ll definitely want to visit this Georgetown location with your family while you’re in the city!

With the information above, you are well prepared for an adventure to Guyana with your family. Still, there are some things you may want to keep in mind, detailed here:

1) The Price of Things

While the cost of living is lower in Guyana than in developed nations, travelers should still expect to pay about the same as they would in any other South American nation for goods and foods. When eating out, expect even low-end restaurants to cost between $5-8 per person.

If you’re going around Christmas time, you cannot leave without trying pepper pot, the national dish of Guyana. This stew is made with meat (sorry, vegetarian friends) and cassareep and is considered one of the best meals anywhere in South America.

3) Know Where to Stay

There are plenty of great lodging options all around the country. In the capital of Georgetown, a number of hotels are suitable for safe accommodation of travelers, while ecolodges such as Saddle Mountain Ranch and Surama Ecolodge are fantastic for both lodging and getting tours of the nearby ecosystem.

Following these tips could make your next vacation even better!