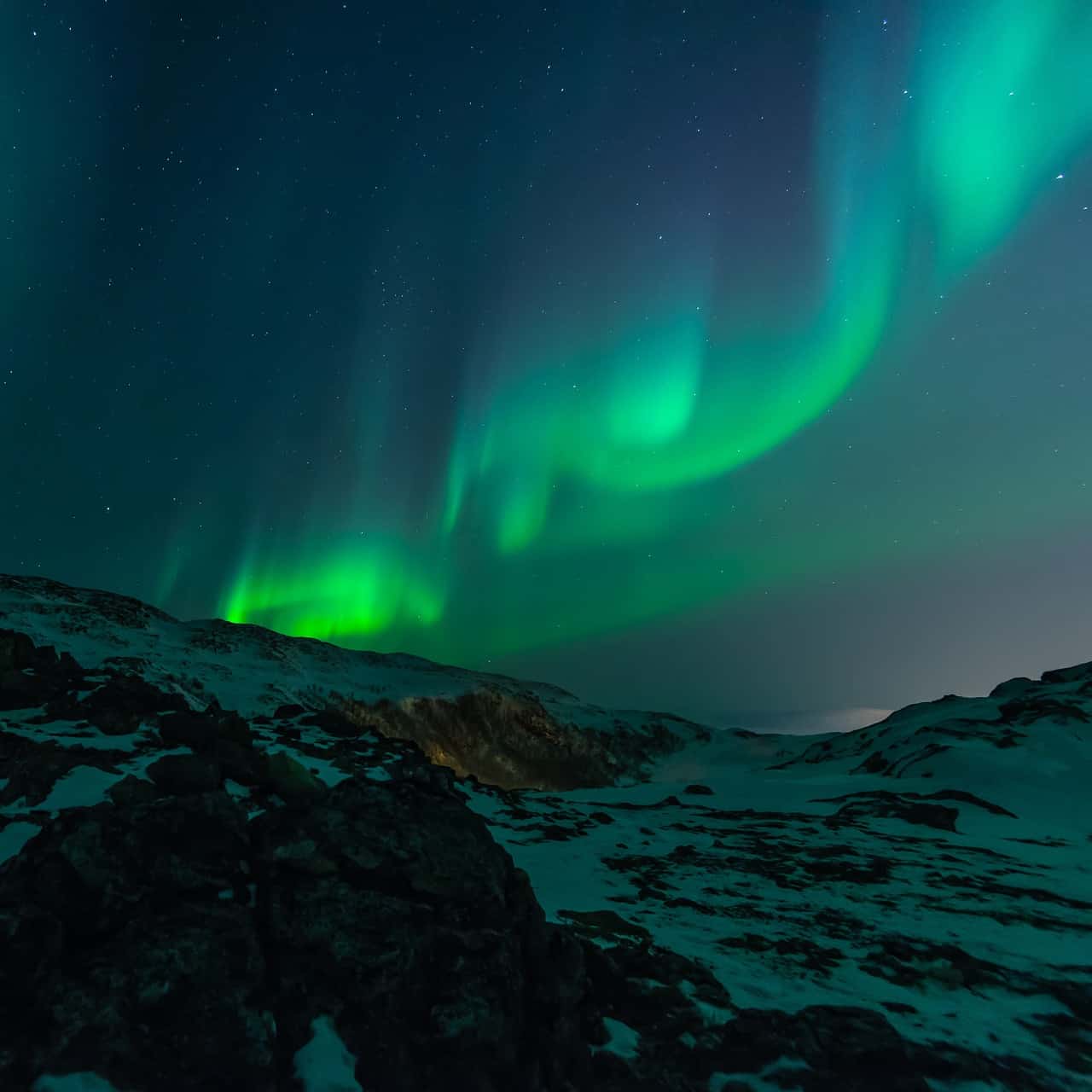 The Telegraph puts the Northern Lights as the number 1 thing on the, “Things to do before you die” bucket list1. My friends told me about how a lot of their friends had the dream of watching the Northern Lights. Now that we have established that it is an amazing thing to do, let’s move on to how I did it and how everyone can.

To begin with, I was blissfully unaware of the hype around the phenomenon. On my exchange program, my friends sold me the story about how people only dream about watching Northern Lights. And I said, “Cool, let’s go then?” The gravity of the experience was yet to dawn on me.

Every time I claim I have seen the Northern Lights, I dread being asked what the phenomenon is exactly. So I did the research once and for all, and here it is in layman’s language. It starts on the surface of the Sun, where the high temperature causes gases to disintegrate into electrically charged particles. These particles are blown towards the Earth. Due to the magnetic field on the Earth, the particles cannot enter the atmosphere. However, the field is weaker around the poles hence, these particles enter and collide with gases in the atmosphere there. This activity causes the colorful displays in the sky.

You can experience the lights in both regions, Arctic and Antarctic. They’re called, “Aurora Borealis” in the north and “Aurora Australis” in the south. Both are similar and happen at the same time. The best places to view this phenomenon is around the polar region. For Aurora Borealis, you have to go at least 60 degrees north of the equator. The following are considered best places to view them-

The best time to go to see Northern Lights has been much researched. To start with, the best year to visit would be 2025. The Northern Lights activity is said to peak every 11 years. We were at a peak in 2014 (fortunately, that is when I had visited) and the activity is currently on its declining stage. The next phase of peak will be in 2025. We can still see the lights in other years as well, but the occurrence will not be very frequent. The best months to visit are the winter months of September to March. There is no cloud cover at this time, and the sky is dark, which is best for viewing the lights.

I was based in La Rochelle, which is a port city on the south coast of France. We zeroed in on Kiruna in Sweden as the destination. I had a Eurail pass, but going all the way to the north by train would mean 45 hours of travel, which would be exhausting. So we decided to take a flight from Paris to Oslo, as there were affordable flights available under 100 Euros for the route. From Oslo to Kiruna, it was a 21 hour journey which we decided to do by train. Alternatively, we could have taken a flight to Stockholm and then a 16 hour train to Kiruna. It was one of the longest journeys I have done. As I progressed and reached each milestone, the anxiety of reaching and missing Northern Lights kept increasing. It’s easy to say we decided to go by train from La Rochelle to Paris, but when it got down to doing it, it was more than a sentence. We had to figure out the airport out of the many airports at Paris, the means to reach the airport from train station, best train to catch and lastly, bus to get to the train station in La Rochelle. Now multiply this complexity by at least ten. But there is always a silver lining as well. At one point in the journey, our train broke down, after much hassle we were shifted to a bus. It was at a point where I could not feel tiredness anymore, I had long gotten numb. But that’s when we were moved to super luxurious trains with private couchettes and lavish bathrooms. We were students on a shoestring budget and would have been grateful if someone simply helped us reach our destination, but the generous officials thought we ought to be made good. Karma was the only explanation.

While traversing through Sweden, I saw massive mountains and a lake amidst them. So pristine, as if humans had not dared to mess with them. It was a memory I have imprinted in my mind, probably one of the things I will see in my moment-of-death-flashback. In all of this, I had forgotten one thing- there would be snow. I had never seen snow in my life before, and I was about to witness it for the first time. We got off at a small station on our way and experienced a flurry. I was dazed at the marvel of nature. I had already seen more than I imagined, and the best was yet to happen. 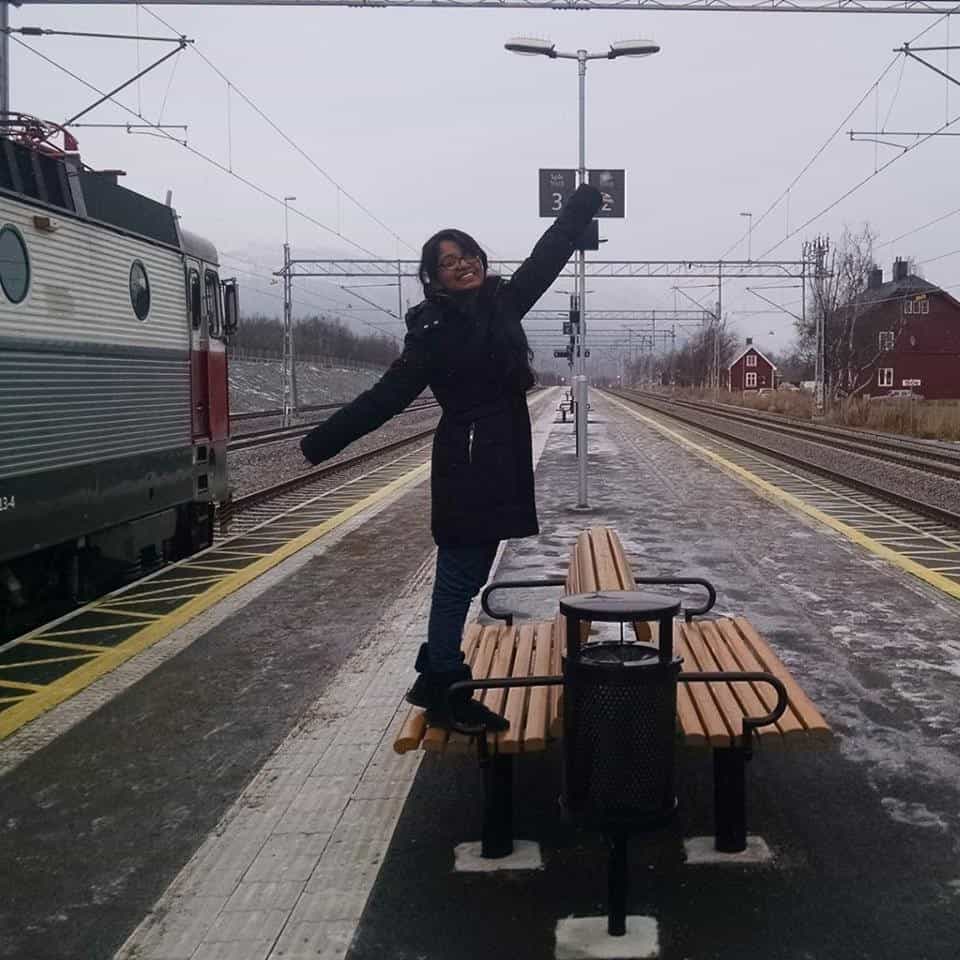 Snow for the first time!

We reached Kiruna. One mind boggling fact I learned was that Kiruna was an iron ore mining location ,and the entire town had to be moved some miles away to prevent it from caving in. The government was going to spend around two billion dollars to make that happen. Incredible!

We settled in our pricey hostel and brought out our brandy and reindeer meat burgers when I got a call from a friend that the Northern Lights were happening then! We rushed out, and we could see a tiny ray of hope. We ran towards a hillock on the outskirts of the town. The hill was snow laden, and the night was dark. There could not be a more dramatic set-up, and this time it was here to stay for the next few hours. It was a bright green- emerald like color. Like sunshine at night.

It was beautiful at the first sight, even for the first hour. But after that, I felt that it is unusual but it is not as beautiful as it is hyped to be. I think what makes it chase-worthy is the chase itself. The thrill of exerting yourself mentally and physically around a huge but achievable task is the fun- quite like life, isn’t it? I saw the locals watching television at their homes while the Northern :Lights happened outside. I don’t want to take away from the beauty of it, but I want to be fair. I wouldn’t say this for some things, but Northern lights- it is about the journey more than the destination.

I saw green lights, there were also blue, red and violet lights more up north. The lights are determined by the gases which collide with the charged particles in the atmosphere. And now I am greedy to view them as well!

We moved from the main town of Kiruna to Abisko National Park the next day. We stayed there for two nights, and Northern Lights happened on those nights as well. I thanked my stars. The star sun, to be precise. More so, when I met a couple later in Bergen who said they had spent seven days in Sweden waiting for Northern Lights some time back, but they did not even get a glimpse of it!

We had really comfortable and affordable accommodation at Abisko. We went for a half day tour in the park towards Abiskojåkka River. I must confess, that was one of the most beautiful sights I had ever seen. The path was laden with snow, and the water was clear liquid ice. I did not feel like leaving that place at all.

Since by now we know the Northern Lights cannot be predicted, it is good to have a plan B. There is quite a lot to do if you go to the north. There are trails and treks along rivers, sledge riding ,and ice fishing. If you are lucky, some treks might be open in Norway, such as Trolltunga trek, which you can visit. There is a heavy Scandinavian cuisine to explore. Also, I found myself playing with snow for very long. In summer months, you can also experience an equally incredible phenomenon called midnight sun.

To moonwalk out of this trip, we spent a couple of chill- metaphorically and literally, days in Bergen. The end was right and oh, I had the time of my life! I can die in peace now, I have seen the Northern Lights!