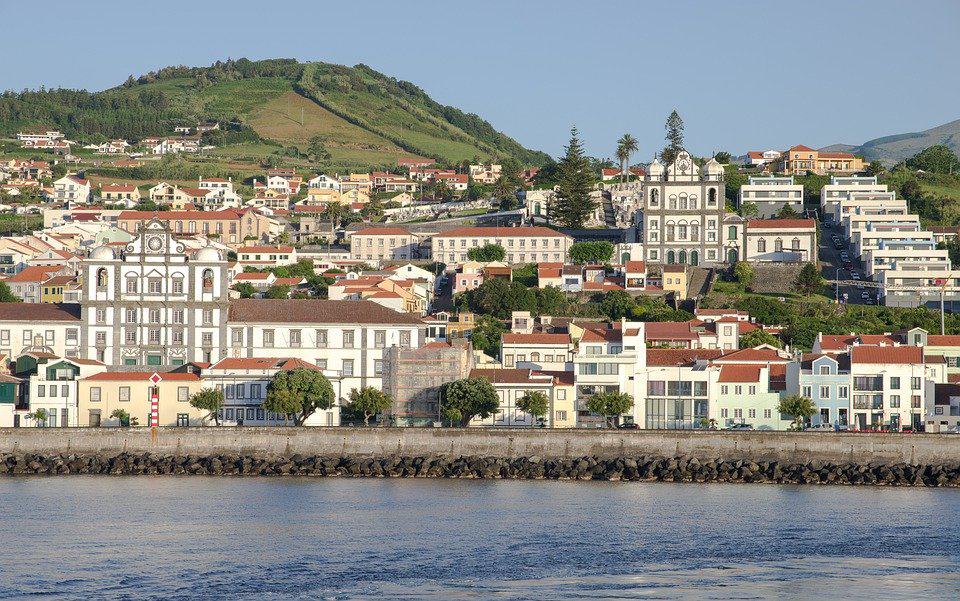 Heard of the Azores? Heading there soon or just simply want somewhere different to travel with your kids or solo this year? Then the Azores might be the right place for you! Spread across the North Atlantic, a group of nine distinctive Portuguese Islands make up the Azores which is also known as the Autonomous Region of the Azores. Each of these islands offer their own unique experiences, yet all of them keep their relaxed & easy-going atmosphere.

Where are the Azore Islands

The Azore Islands are a set of 9 volcanic islands in the North Atlantic Ocean. They are situated approximately 1,500km from Lisbon, and approximately 4,000km from the East Coast of North America. The nine major islands are in fact, spread over 600km, stretching in a northwest-southeast direction.

The nine Azores Islands are grouped into three clusters

Who owns the Azore Islands

The islands of the Azores are owned by Portugal. They are currently an autonomous region of Portugal. Initially discovered in the 15th Century by Portuguese settlers, the islands became a major trading center between Europe, India and America.

What is the population of the Azore Islands?

The population of the Azore Islands is 245,000 habitants. The majority of whom (56%) live in São Miguel, with a further 23% in Teirceira, and another 21% spread across the other 7 islands. The official language of the Azores is Portuguese.

How to get to the Azores Islands 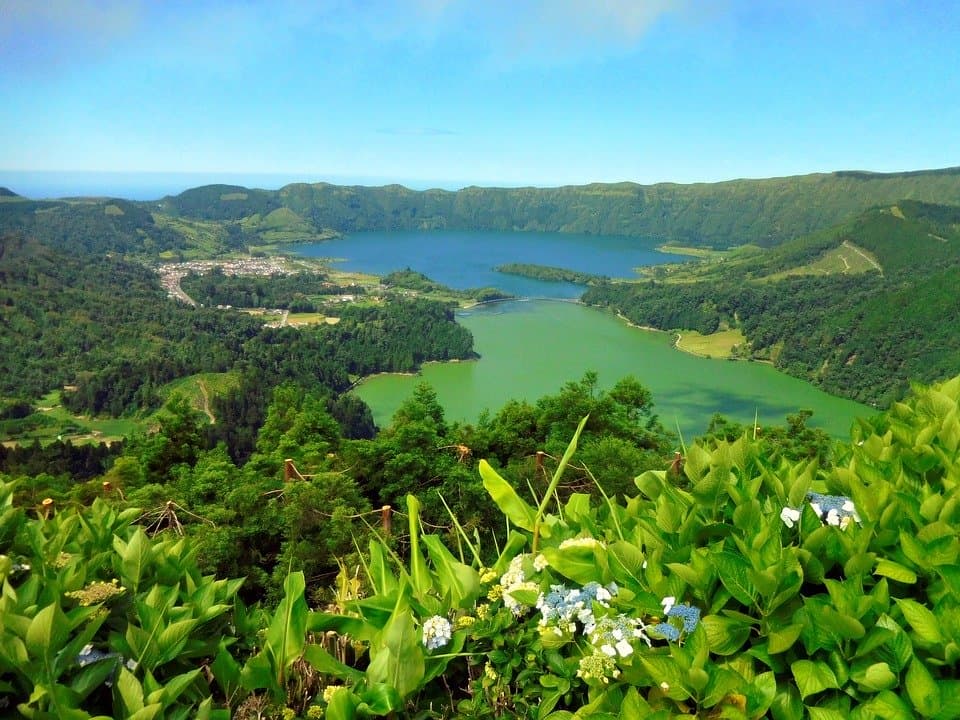 Carriers such as Azore Express connect New England to the Azore Islands by a number of destinations. If you live in the USA, you’re less than 5 hours’ flight away to Azore Islands from Boston Logan Airport! And if you’re coming from Europe, European international connects the islands with many European hubs, such as London, Brussels, Frankfurt, Lisbon, Billund, Paris and so many more other cities.

How to get around the Azores

The best way to get around the Azores is by renting a car. Which is available on every island except Corvo. On top of that, almost every island runs bus services every day and for most part of the day. Some of the smaller and less popular islands have reduced bus schedules and may only twice a day, typically in the early morning or afternoon.

There is also ferry transport available between the islands of Faial, Pico & São Jorge throughout all months of the year, as well as a weekly service between all the islands which operates during the summer months.

Cycling is another way to get around the islands. The winding roads allow for an enjoyable path for cyclists, with varying difficulties available from beginner right the way through to experts. Of course, you want to make sure to take it easy if cycling with children for the same exact reason–the roads are winding.

As it is located in the Northern Hemisphere, the Azore Islands are prone to a mild climate throughout the year. Cloud & rain are a possibility throughout any time of the year, but the summer months, between June and October, have more sunshine and higher temperatures. Throughout the entire year, the average temperatures will range from mid 50’s minimum, to low 70’s at a maximum.

When is the best time to visit the Azore Islands?

The best time to visit the Azore Islands is during the summer months, that is predominantly July and August, which is the warmest and sunniest time of the year. Due to the Oceanic climate, the Azores seas will take longer to heat up. So much so that September is actually a warmer month than June. This means that even through rain is more frequent, September is still considered a summer month, whereas June may be slightly cooler and cloudier.

What Currency is Used in the Azore Islands?

Like the rest of Europe, the Azore Islands use the Euro. Cash is, of course, accepted everywhere. Credit cards are likely to be accepted almost everywhere. Alternatively, most ATMs allow you to extract Euros with your debit and credit card. You should also keep in mind that Portuguese banks are unlikely to cash out credit cards at the bank counter.

Safety in the Azores Islands

Fortunately, there is very little violent crime in the Azores Islands. There are no reports of crimes against tourists, and the most common type of crime is  petty, and drug-related. However, theft does exist in populated areas. Make sure to use common sense like you would visiting any other part of the world – make sure you lock your hotel room, your car, and keep your belongings close to you at all times. Following the advice above, and you are unlikely to run into any problems.

Best 10 Best Things to do in the Azores

The Capelinhos volcano first erupted in September 1957 and has since changed the entire face of the Faial Islands, when it created an entirely new island, linked to the Faial by an isthmus. The eruption luckily didn’t cause any casualties but forced almost 1,800 habitants to emigrate to the US permanently.

Photographs don’t do justice to the dimensions of this patch of volcanic ash, nor can they accurately convey the sense of wonder you’ll get when you’re standing on this land mass that was entirely submerged by the ocean just 60 years ago. The Capelinhos is one of those places you have to see to believe.

2) Chill in Angra do Heroísmo.

Angra do Heroísmo is a beautiful city with a lively atmosphere. It was regarded in the 15th & 16th century as a stepping stone to expeditions in the New World.  Nowadays, however, with its traditional houses & patterned mosaic pavements, Angra do Heroísmo is one of the most famous towns in the region for tourists. It has plenty of shopping facilities and a rich history of offering to tourists in the city’s very own museum.

3) Get mesmerized by Lagoa de Fogo

What currently stands as one of the most significant water bodies in the Azore Islands, Lagoa de Fogo is a must-see for tourists in the region. When you consider the tranquility of the scene, it seems incomprehensible that the most recent eruption only took place in 1563.

These days, the lake’s atmosphere is protected by the natural reserve. When visiting this jaw-dropping landscape, make sure you plan for a sunny day, as the crater itself can often become shrouded in misty conditions.

Situated on the West Side of São Miguel Island, the majestic scenery of the Sete Cidades Massif is one of the most visited areas of the entire Azore Islands. This landscape has been shaped by over 30,000 volcanic eruptions, with the last eruption taking place in the 15th Century, just before the island was colonized. When looking for a viewpoint to admire the natural beauty, you can look no further than the Vista de Rei, along the southern rim, near the abandoned Monte Palace Hotel.

Here, you can experience the sensations of going more than 300 feet into a historic lava tube, straight into the magma chambers of an extinct volcano, right in the center of Terceira.

The entire setting is made even more stunning, with the ferns and mosses giving a green hue along the upper sections of the cave. At the very bottom of the beautiful cave is a stunning lake, with beautifully clear waters.

This lake also has special features to make it stand out, with apparent indications of volcanic activity present along the shore, particularly in the North-West region. A walkway along a raised boardwalk offers fantastic views of the pools, and perhaps the small calderas which restaurant chefs use to let their Cozido pots simmer. A trip to this attraction during mid-day may be enough to spot them fishing out the caldera.

Regardless of the time of the year, you can take a blissful soak in the delightful hot-spring complex near Furnas. The Hot springs originate from caves with a maximum temperature of 105°F feeding a set of pools, each with their different temperature.

Initially, people would soak in the caves, until it was realized to be a much safer idea to funnel the water into the human-made pools. This complex is bordered with tropical vegetation and was recently updated.

8) Hang Out in Marinade Horta

This is the main harbor for recreation on the Azores Islands. It can become hectic between amateur sailors and transatlantic regattas. It wouldn’t be unusual to find a range of super-yachts on the harbor. Interestingly, both the walls and paths of the quays are covered in paintings from almost every voyager, declaring the date they arrived at the dock, and the name of their ship, mostly out of superstition that doing so can keep them safe.

The Azores Islands are widely regarded as a surfer’s paradise, thanks to the waves created by the islands’ volcanic seabed. Each Island has fantastic sports to enjoy the waves, but the very best can be found at São Miguel, thanks to its excellent infrastructure & reef breaks.

The Praia de Santa Barba on the North Beach is complete with its surfing schools and has even held World Surf League competitions in recent years.

Unfortunately, diving is not an activity you can perform all year round at the Azore Islands. However, between June & October, the Volcanic geology allows for diving experiences that just cannot be found elsewhere. Every area of the island has something completely unique to offer – from the underwater anchor graveyard of Angra do Heroísmo, to the Pico Island’s topography, you would struggle to find a more diverse range of diving experiences anywhere else in the world.