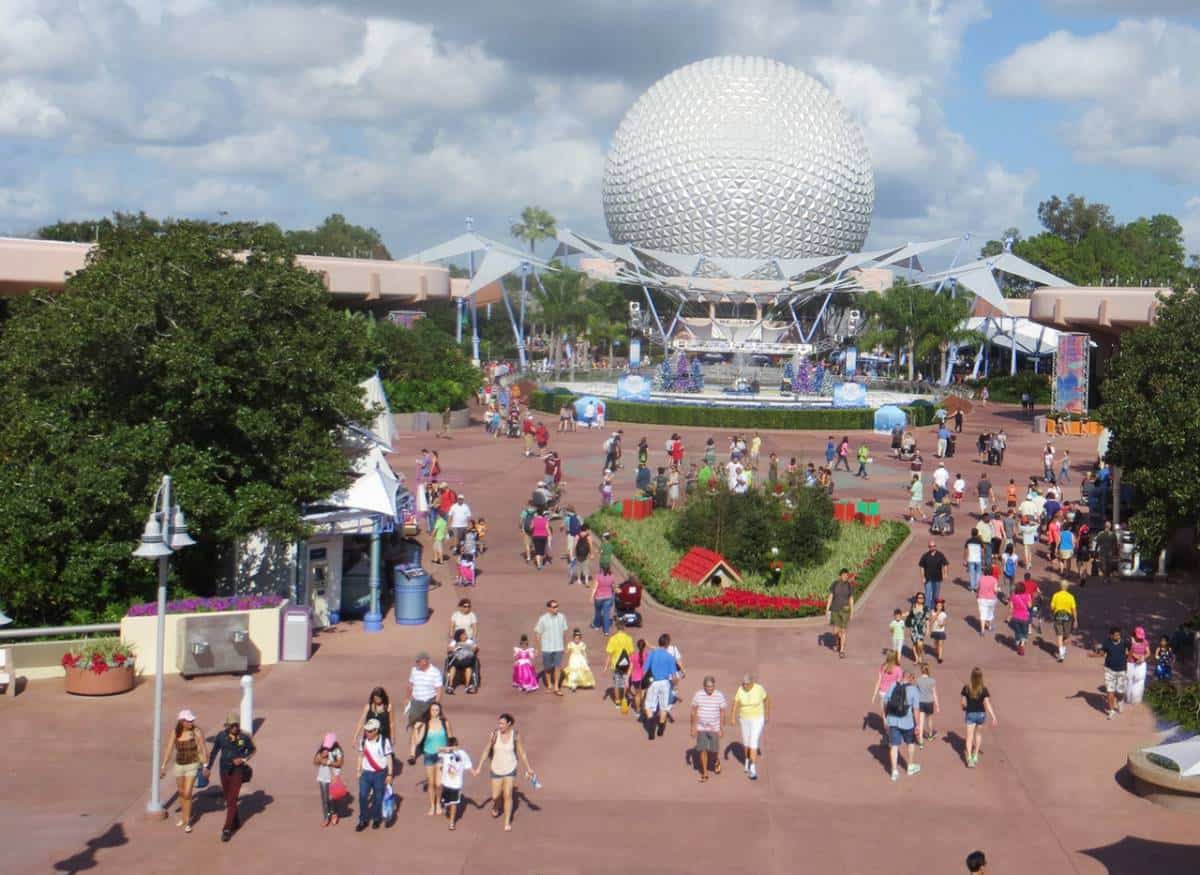 EPCOT is a branch of Disney theme parks. It is located in Bay Lake, Florida and is managed by The Walt Disney Company. When people hear about EPCOT, they often ask, “What does EPCOT stand for?” or more specifically, “What does the ‘T’ in Disney’s EPCOT stand for?” EPCOT is an acronym and stands for Experimental Prototype Community (or City) of Tomorrow.

The History of EPCOT

EPCOT was created by none other than Walt Disney himself when Walt Disney World was early in the developmental stage. The park officially opened to the public on October 1st in the year of 1982. It was actually the second of the four major theme parks built at Walt Disney World and was formed right after the Magic Kingdom.

This park was meant to be a central region for American innovation as well as urban living in a mapped community. It spans over 305 acres and is more than twice the size of the Magic Kingdom Park.

Below are some of the key milestones in the history of EPCOT:

In the 1960s the concept of EPCOT was formed. The name Experimental Prototype Community of Tomorrow was formed, and Walt Disney formed the idea that this was going to be a Utopian city. It was meant to take on the new concepts and technologies of the modern American world and make a city of tomorrow that will constantly be evolving.

It was originally thought to be a community that would house 20,000 residents. It was meant to be built in a circular shape with the commercial areas in the center and the homes around the outskirts.

Transportation was going to be provided by various monorails as seen in other Disney parks, and any automobile traffic was going to be underground. However, Walt Disney was not promised to be funded for this project until he built the magic kingdom; however, he died just five years before they officially opened the Magic Kingdom.

Because Walt Disney died before creating the city, the Disney business did not find it right to complete the vision without him. Instead, they decided to change the concept into a theme park like Disneyland.

Some argued that they still wanted it to represent cutting-edge technologies while others argued that they wanted it to centralize around cultures. To meet in the middle, both of these ideas were combined into one and construction officially began. Its overall cost was around $800 million to $1.4 billion and was estimated to take three years to complete.

In the 1980s, the park was officially opened. There was a large opening day ceremony that featured songs, dances, and more. It was a big event for EPCOT.

Even though EPCOT was successful at the start, it began going downhill in the coming years because it was beginning to be seen as outdated. To up its popularity, EPCOT began holding events, but it still began to fade out of the public’s eye due to more innovative parks. To counteract this, EPCOT began to be remodeled, many of the attractions being replaced by newer and more modern ones.

Just a few years ago in 2016, Disney announced that EPCOT was going to be completely redesigned. The vision was kept pretty under wraps and the redesign was going to span over a few years.

Just this year, Disney decided to expand on the improvements of the park and came out with new worlds to include in the new version of the park including World Celebration, World Nature, World Discovery, and World Showcase reimagined.

Areas Within the Park

EPCOT is distinguished by two main areas: Future World and World Showcase. They both have different opening and closing hours and feature different attractions and sights.

Future World has a variety of different and unique pavilions that are surrounding areas of technology and science. They all have unique and distinct architectural designs that are satisfying to the eye. Future World is the main entrance to the park and has various rides within it. The seven pavilions found within Future World include:

World Showcase contains eleven pavilions and each one is themed to represent a different county. These countries that are represented include Canada, The United Kingdom, France, Morocco, Japan, United States, Italy, Germany, China, Norway, and Mexico. The last two pavilions to be added in the 1980s were Morocco and Norway. Each of the pavilions has themed designs and architecture that represents the culture of that county. They even have rides and shows throughout them.

Events Held at the Park

Within the park, there are a variety of sources of entertainment for both you and your family or group. For example, there are EPCOT concerts, EPCOT character spots, EPCOT shows, and much more, but the most popular events held by EPCOT are the annual events. Some events that are held annually include:

The International Flower and Garden Festival: This festival began in 1994 and uses flowers to create themes throughout the park. There are floral sculptures of characters and gardening experts to give tips on gardening to guests. This event runs from March 2nd-May 15th each year.

The International Food & Wine Festival: This event began in 1995 and is meant to draw in food and delicacies from across the globe. Often, there are celebrity chefs that are there to host events or competitions.

The International Festival of the Arts: This event was created in 2017 and showcases various arts such as culinary arts and performing arts. It runs from January 13th-February 20th on the weekends.

The International Festival of the Holidays: At the yearly holiday celebration, there are many storytellers in World Showcase that tells stories of holidays from their regions and countries. There are also various performers, dancers, festivals, and more.

The New Year’s Eve Celebration: On New Year’s Eve, there are various events spread throughout the park. They have DJs, dance areas, and even a special countdown for the New Year.

Best Places to Eat in EPCOT

EPCOT features many different dining options such as EPCOT breakfast, lunch, and dinner. You have a wide variety of food types and are sure to find something that you like. The varieties are so vast in number that you are guaranteed to find food that will suit the dietary needs and desires or your entire family or group. From the pickiest eaters to those who will eat virtually anything, there is something for everyone. There are even some nice places to get drinks if you need a break away from the kids which is completely understandable.  Some of the top recommended food areas, though it is not nearly all of them, within the EPCOT park include:

When planning a trip to the EPCOT theme park, it is important that you find a good place to stay while there. You have the choice to stay either in a hotel nearby or in an EPCOT resort. The resorts that are located the closest to EPCOT are The Walt Disney World Swan and the Dolphin. Both of these resorts place you in very close proximity to the park.

These two resorts are luxury and deluxe resorts that make you feel at home. Some of the benefits of staying in these results include:

Staying in the resort come with a lot of pros, but if you do not want to spend the price to stay in a resort, you can choose to stay in a hotel nearby. There are a variety of hotels that can be found in the area surround EPCOT, so you have different and varying options. Some of the most popular surround hotels to stay in include:

However, in the winter, Florida is very rainy. Be prepared to bring a jacket or even a rain poncho to keep you dry in the drizzling, wet winters. Florida can also be humid so even though it may be raining and dark, it still may feel warm.

Make sure that you refer to the weather forecast for the week that you are planning to go since the weather can vary greatly throughout the year.

If you are planning a trip to EPCOT anytime soon, there are some quick tips that may be helpful for you and whomever you are going with. These quick tips are similar across a variety of Disney theme parks.

One such tip is to get an EPCOT fast pass. This fast pass, just as it is in Disneyland and Disney World, will allow you to skip through the lines and get on the rides much faster. This is especially helpful in the busy seasons or weekends at the park. With the fast passes, there are distinguished EPCOT fast pass tiers, each one allowing you more and more advantages in the park.

Another quick tip is to take advantage of the variety of dining options because of the EPCOT quick service. The dining places around the park are known to be both delicious and quick so you have more time to enjoy the park and the rides.

Overall, EPCOT was once a vision for a Utopian city but, upon the death of Walt Disney, was changed into a theme park. Today, EPCOT remains a theme park where people can go to see different cultural representations or technological advancements.

There are a lot of options for hotels or resorts around the area that will make you feel at home. You can choose to stay in the official EPCOT resort or go with a less expensive option and stay in a surrounding hotel.

With all of this being said, EPCOT, otherwise known as the Experimental Prototype Community (or City) of Tomorrow, is a great place for adventurers and Disney-enthusiasts alike. It is not only fun but is also educational. If you have not yet been to this amazing theme park before, it is highly suggested that you check it out. It is definitely worth it!