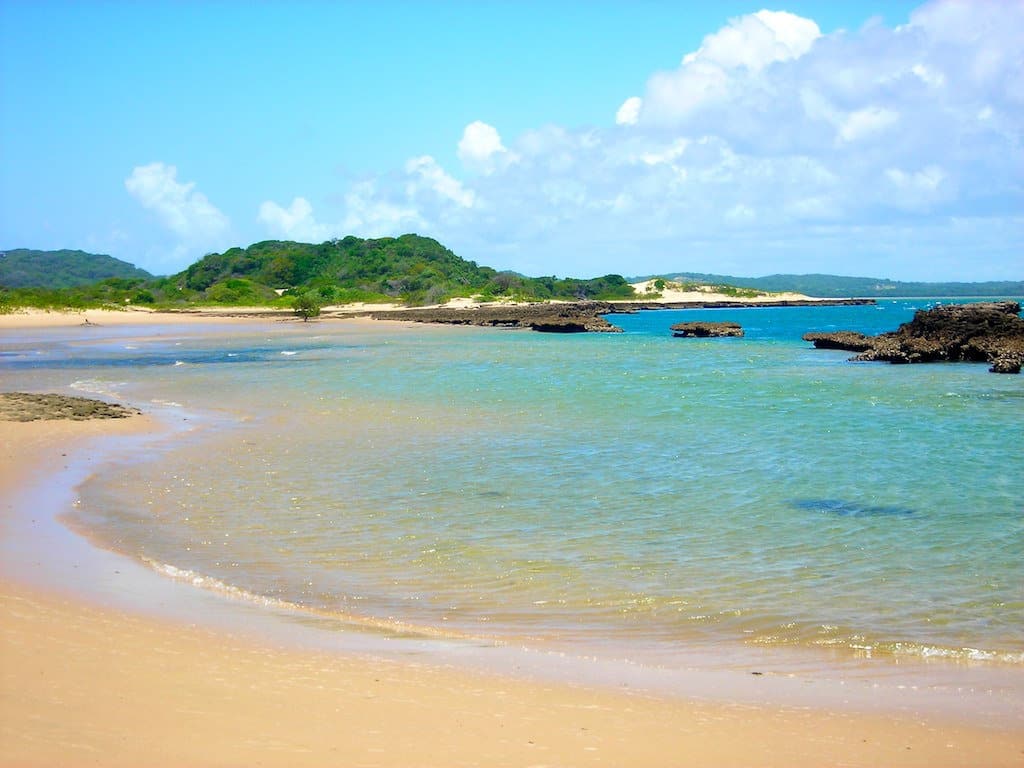 I wouldn’t quite call what I was sitting in an aircraft.  The ride was bumpy, noisy, and  the windows rattled.  There probably wasn’t space for more than 10 passengers.  If a Boeing was likened to an eagle, this was a mosquito.  Our mosquito luckily only had to take a 10 minute flight out to sea from the Mozambique mainland to Inhaca Island.

A  4-wheel drive was waiting at the runway to drive us through open plains to our beachfront lodge – Pestana.  Now this was a real island.  Sand and gravel replaced paved roads and not a high-rise building in sight.  There were, however, cocktails, an abundance of scrumptious fresh seafood, and glistening golden sunsets.

Inhaca Island surely has a lot to offer for such a small place.  The island is approximately 7.45 miles by 4.34 miles (12 kilometers by 7 kilometers), and the entire piece of land is protected as a natural reserve. At the time of my visit, mid-July, the resort was being refurbished, which meant highly discounted rates.  This, however, made no impact on the quality of our top-notch adventure whatsoever.  What a bargain!  It was winter, but the best kind of winter you could ever imagine, with warm sunny days and cool evenings.  Pestana Lodge is set among coconut palms and exotic gardens.  Just beware, falling coconuts.

We eased into the island vibe with sunset cocktails on the beach and a walk along the cool waters where boats were floating and fisherman heading homewards.  Tiny crabs were running along the shores and scurrying under the wet sand. 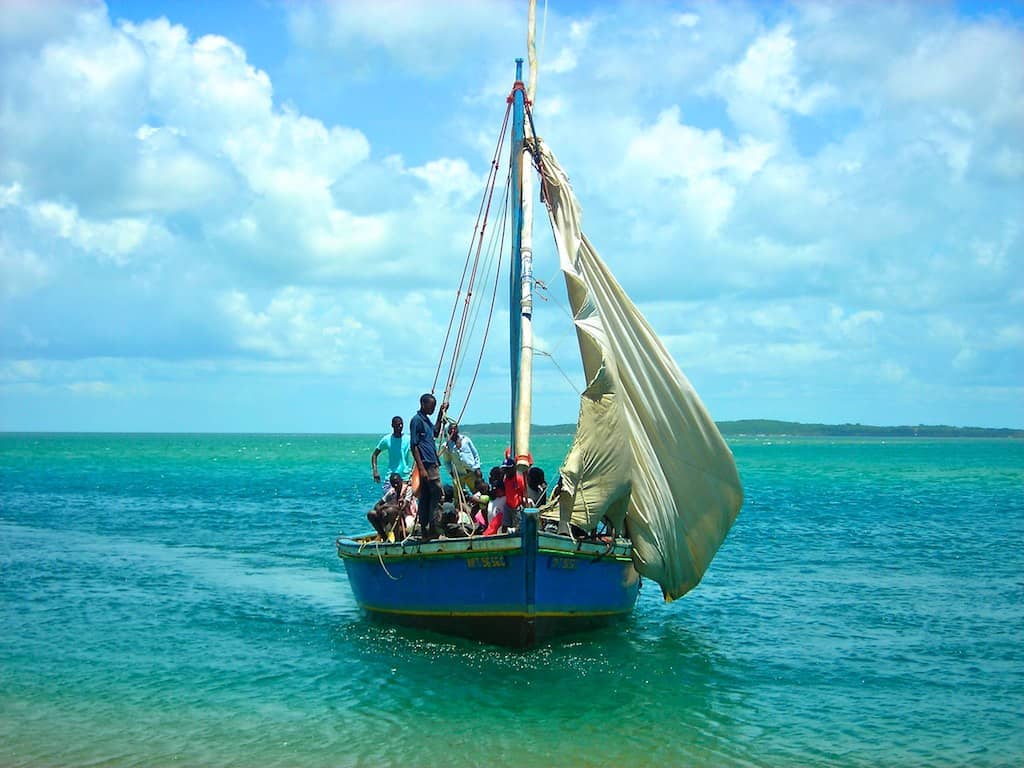 Fit for a king, our seafood feast was served under a large thatch boma – an outdoor entertainment area with open sides looking onto the salt-water pool.  In buffet style there were prawns, curries, and freshly caught fish.  The island was part of the Portuguese Colony of Mozambique until 1975, and the Portuguese influence is still very apparent in the cuisine.  It was an absolute delight.  We rolled back to our African-island themed rooms, and drifted off to sleep with the waves of the ocean sounding in the background. 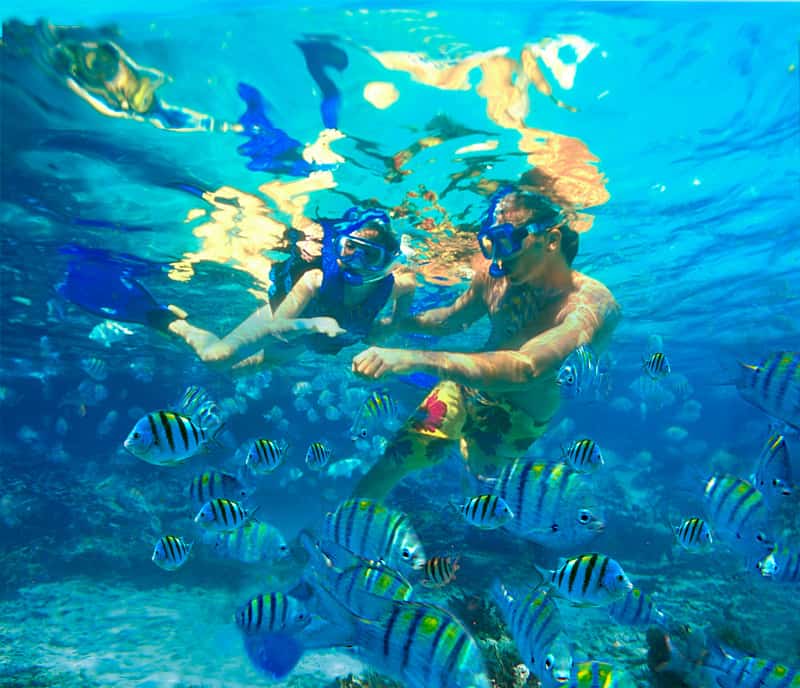 The days ahead were adventure filled.  First on our list was a snorkeling expedition.  I had heard so much about what Mozambique’s waters have to offer.  It is an incredibly popular destination for divers.  As I don’t have a diving certification, snorkeling was pretty much the only option, but with the extravagance of the ocean corals and colorful fish, this was quite sufficient.

We were geared up in wetsuits, and jetted out on a speedboat to a suitable snorkeling spot.  Wetsuit and goggle sizes are not always guaranteed, so bring your own gear if you are planning to come during peak season and spending a lot of time in the water.

I sometimes find the oceans a little scary.  Maybe I should rather call it a respect for nature’s grandiosity.  You never know what lurks around the next big reef, what lies below you in the dark, or what might jump out from under a rock. After-all, jumping into the ocean and lurking underwater is being in another creature’s territory.  Once I was underwater, however, I felt a bit like the ‘Little Mermaid’ surrounded by a forest of beautiful corals, starfish, sea-horses, and friendly fish fluttering around.  I was also really excited to see an angel fish, and just enthralled by this mind-blowing eco-system.  Although we did not see any, dolphins and sea-turtles also make seasonal visits to the island waters.

It started getting a little windy.  The waters turned choppy and slightly murky ,so after maximizing our time in the reefs, we headed back to the lodge and warmed up. 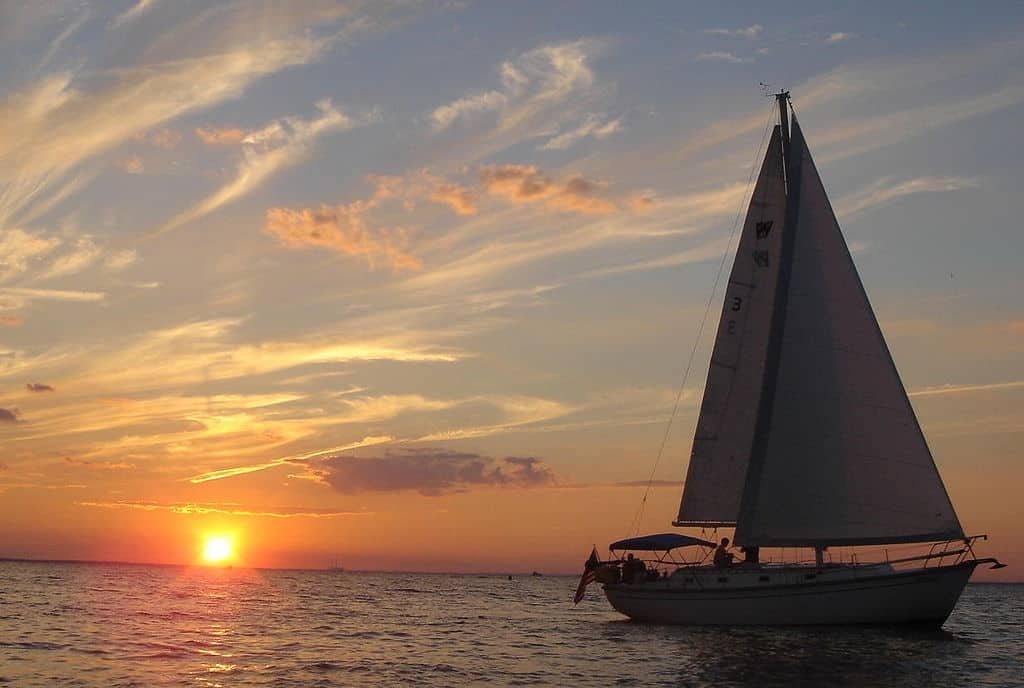 We had not had enough of Mozambique’s clear waters yet and before dinner, we headed back out to sea for a sunset cruise on a traditional dhow. Dhows are of Middle Eastern influence and have a triangular sail.  They are simple boats, but have a rather romantic charm to them.  The sparkling Indian Ocean was now calmer despite the slight chill in the evening air…and boy were we already dreaming about our seafood feast as we returned to the shore and headed straight for that boma.

Do it like a local (or with a local)

As with most islands, Inhaca is a small paradise for lovers of sea sports.  One can enjoy kayaking, sailing lessons, windsurfing, and waterskiing.  The surrounding area is also a very popular fishing destination. 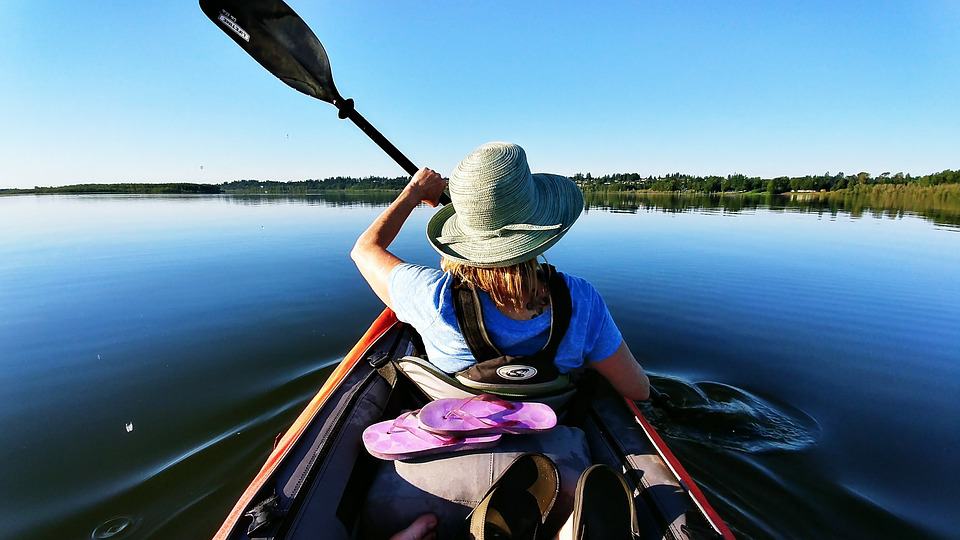 Land activities can easily be explored on your own, without a guide if you so prefer.  We, however, landed ourselves two surprising little local guides.  Our new found friends were two little boys from the local community.  They were so excited to take us on a journey through their territory, big smiles on their faces. First we went along the beach, and then past the local community homes. These are very much self-sufficient pieces of land with small vegetable gardens, chickens, and some goats.

We were then guided on a hike up a steep sand dune to the lighthouse.  After much huffing and puffing, and a bit of sweat, we were rewarded with a breath-taking view from the top.  The original lighthouse was a 90 foot (27.5 meter)  cast iron tower guiding ships to Mozambique’s seaport, Maputo.  We could see the remains of the M/S Tecumseh Ship, which shipwrecked on Inhaca Island in 1932.  The oceans stretching as far as the eye could see and a beautiful island view of trees, palms, and tropical landscapes was definitely worth the trek.

Our little tour guides then decided to take us off the beaten track.  They led us to a magical deserted beach with the most exquisite clear turquoise waters I’d ever seen.  This was the perfect place to take a refreshing dip and lie on the soft sand after our tiring hike.  What a glorious site.  Just us, the white sands, the turquoise waters, and the blue skies. 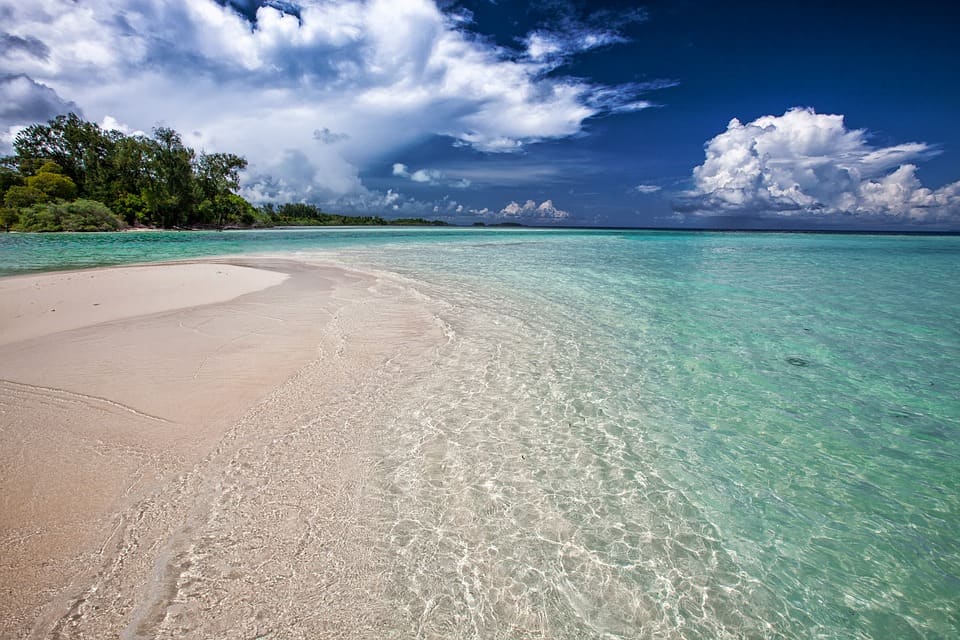 The boys escorted us back to the lodge.  We had such a great time with them, and they even came to greet us farewell at the landing strip on our return home a few days later.

Being avid cyclists, we hired some bicycles during our time there, and did a ride across the (sandy) island.  I am a bit more of a roadie, so I found the soft sandy paths slightly challenging, but it really is a fantastic way to explore the island.  We popped in at a local restaurant for lunch.  In my opinion, you have not visited a country if you have not eaten the local cuisine.  I still get visions of that delicious calamari platter, golden crust, and lemon to be drizzled alongside.  Yum!  Seriously, yum.

Take Me to Paradise

Our trip had almost come to an end, however there was one more piece of paradise we had to discover, namely Portuguese Island.  It is a small, uninhabited island under the cover of Inhaca.  A short boat ride took us to a secluded beach area where we could walk on long stretches of white sands with only our footprints trailing behind us. 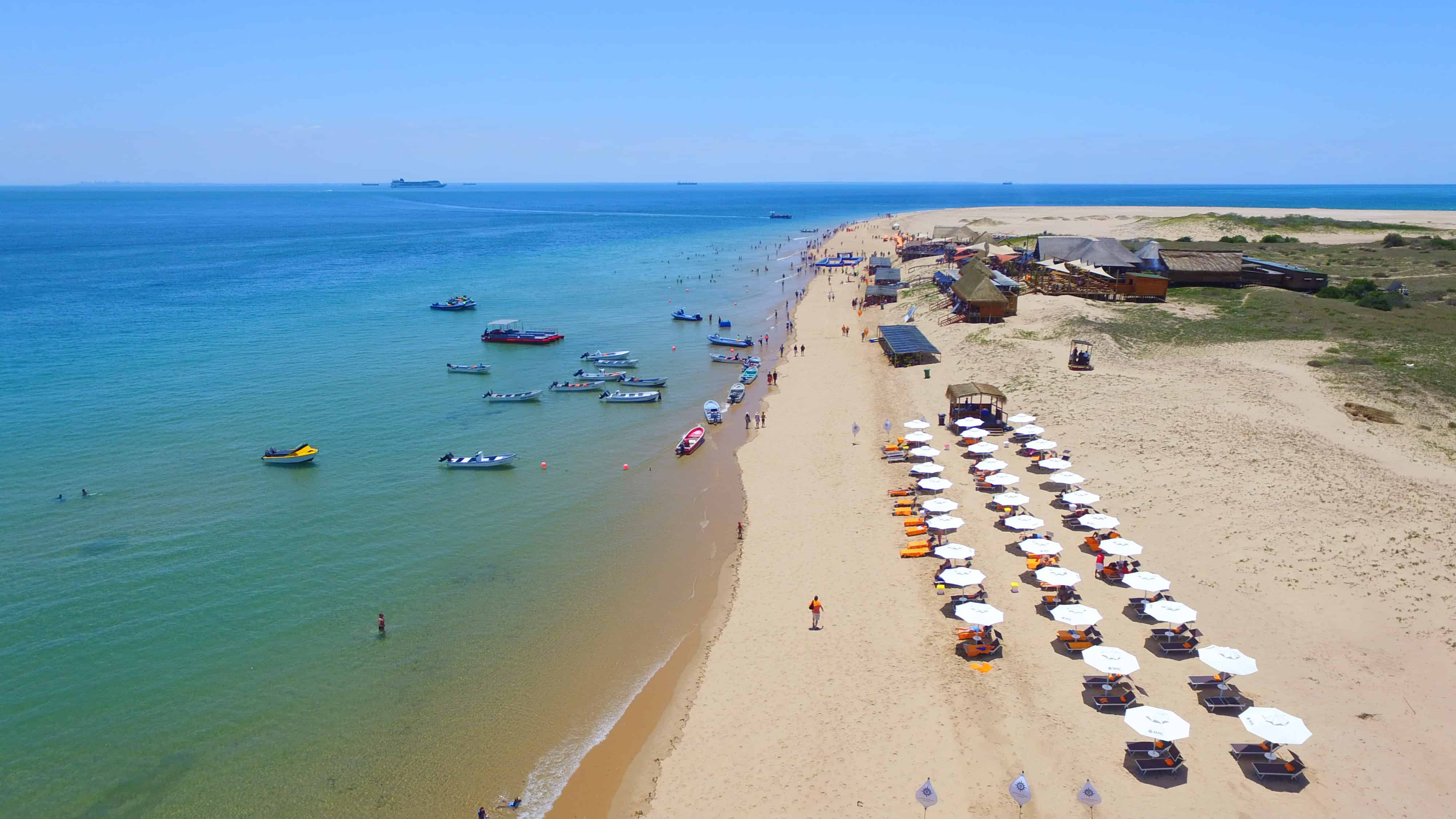 As it was off-peak season, there were very few other tourists around, and on this specific day it felt like we had the island all to ourselves.  The Mozambique sun and warm waters made it feel like summer, perfect for splashing around and taking long walks.

But Wait…There is More

If you are travelling from afar, I would definitely recommend that you make the most of all that travelling time and explore more than just Inhaca.  The surrounding islands are slightly more luxurious, and the Mozambique mainland has a host of local markets and great eateries to offer.  There are also cruises up the coast from South Africa which allow you to explore various ports, islands, and activities along the way.

The coastline of Mozambique has some of the most intact reef ecosystems in the world. Whale sharks and manta rays will join you for a swim from September to February, and maybe you will also see endangered species of turtle.

Inland Mozambique has Big Five game reserves where you can camp in luxury (or rough it if you prefer), enjoy game drives, and even take guided walking safaris. 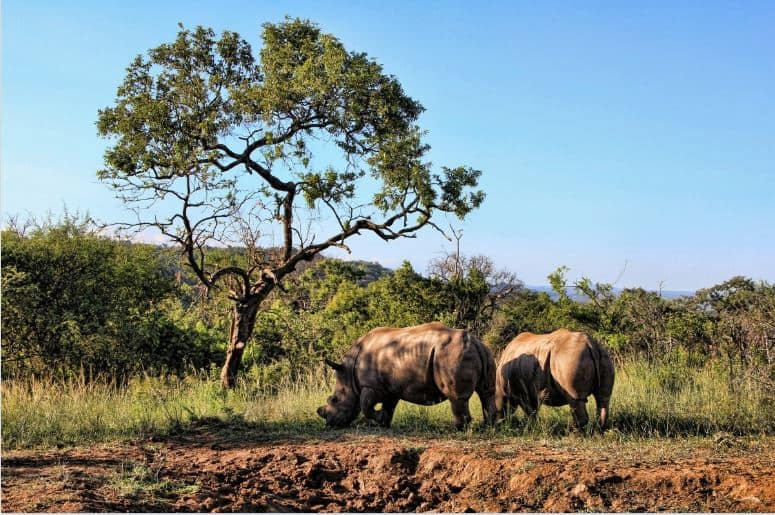 Ilha de Mozambique is an island just off the coast of mainland Mozambique, and was a major trading port for many centuries.  It is now a UNESCO World Heritage Site. The island is only 1.86 miles long (3 kilometers)  and has many historic sites, including the Chapel of Nossa Senhora de Baluarte, which was built in 1522 and is considered to be the oldest European building in the Southern Hemisphere. There is a 16th Century Stone Fort, Historic hospital, and many other interesting buildings for those interested in history.

Inhaca may be the perfect spot to disappear for a romantic getaway or an adventurous escape, but if you are brave enough to venture through pot-holes and laid back enough to operate on “African-time,” then don’t miss out on the surrounding protected marine reserves, wildlife, and big cats, colorful  culture,and lip-smackingly delicious and spicy seafood on the mainland too.