When I decided to travel to Southeast Asia, I was most interested in the enormous geographic features found in the region. Planning for my trip, the Mekong River was at the top of the list, my travel partner had Angkor Wat and Bangkok, but it was the muddy waters of this river that called my name.

The river is special because of its place in human history. Civilizations since the beginning of recorded time have used the Mekong. Intense agriculture has been perfected in her floodplains, natural resources such as animals and timber have been exploited for hundreds of years, and entire towns and cities rely on fishing as the main source of food. 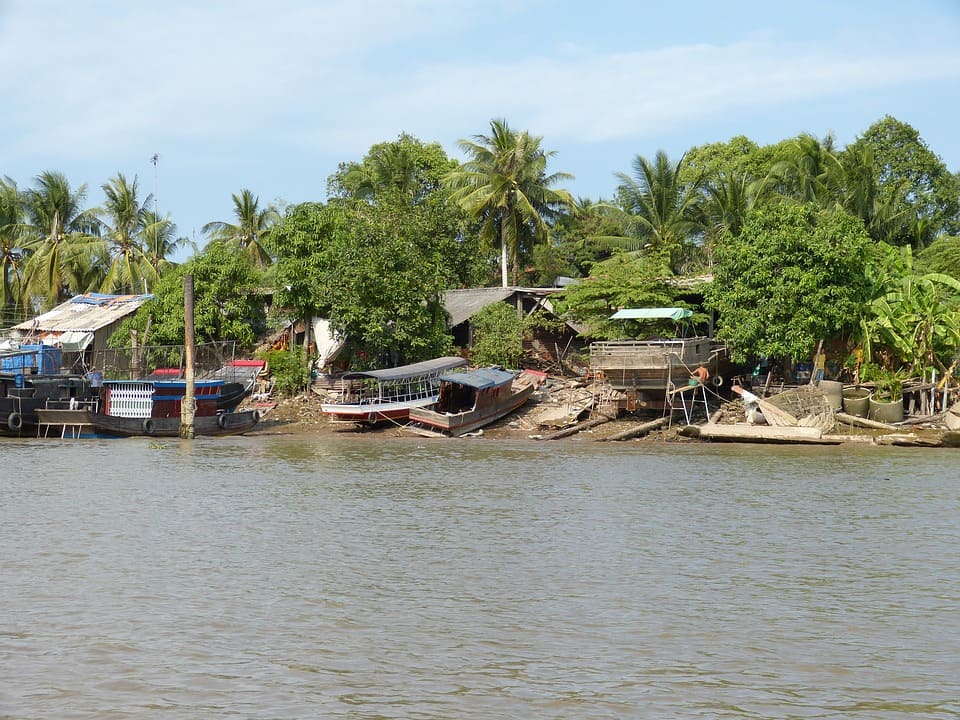 The Mekong begins its course high in the Tibetan Plateau, and glacial melt and rain waters make up her headwaters. She then flows South, through China, cutting into steep cliffs and creating impenetrable banks. This part of the river, although topographically brutal, is where the majority of logging takes place. China, with its insatiable demand for natural resources, has stripped so many trees from the Mekong drainage basin that the majority of sediment in the river is from those activities. Making its way South, the river flows through Myanmar and Laos, carving the foothills of the Himalayas and gaining trillions of gallons of water from the rainforested hills. Laos, once covered in rainforest, has been clear cut, and replanted with rubber plantations from one side to the other. Every cell phone, car, airplane, everything uses rubber, and most of it comes from Southeast Asia. Even with the rampant transformation happening on its banks, the Mekong flows ever southward.

Cambodia and Vietnam are the final countries on the Mekong river, it is through these political entities that the water finally makes it to the ocean. At over 2,700 miles long, it is the world’s 12th longest river and 10th largest in terms of volume. It is the behemoth that drains Southeast Asia.

In Cambodia, the lower portions of the river are wide, slow, and flat; at certain points, it resembles more of a large lake than it does a river. Cambodia is an extremely flat country, and if you were able to stand tall enough, it would be possible to look onto the horizon. Without the hills and mountains to force water through, the Mekong stays relatively benign, flooding the flattest areas during the monsoons. Cambodia’s flatness has also made agriculture easy to scale, and on my bus ride through the countryside, trees were few and far between. If the landscape had not been planted with rubber plantations, there was instead farms and rice paddies as far as the eye could see.

Taking the local bus is the best way to experience Cambodia. Too many tourists simply listen to tour operators who upcharge greatly for the same service. Riding on public transportation, I was the only foreigner on the bus and was privileged to witness rural Cambodia without a filter. I do remember stopping for a lunch at a bus stop. As is common in Southeast Asia, buses stop every few hours for passengers to use the bathroom and grab a bite to eat. I walked into the small dining area and like everyone else, grabbed a plate. I was served some kind of dish with a mystery meat, I try to stay away from meat when traveling, but it was all that was being served. As I took some bites, I found hair on the bones, very similar to dog hair. That, coupled with an off putting flavor, made me very sick. I didn’t eat anything else that day.

The reason for taking a bus was for transportation from Angkor Wat to Kratie. Angkor Wat is an incredible place to see, and most people go to Cambodia for that reason alone. I am not in anyway discrediting Angkor Wat; it is truly a wonder of the world. 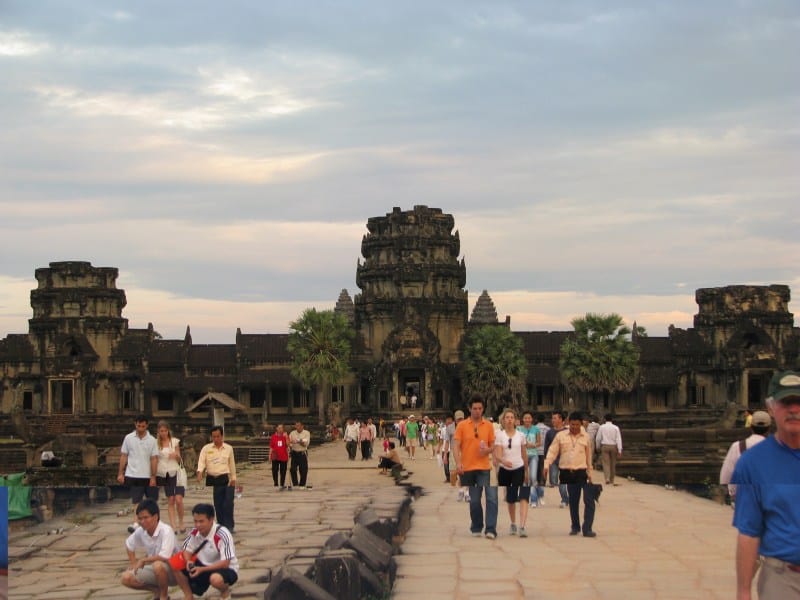 After seeing it, I was ready to head off the beaten path and experience the wonders of the Mekong. The best town in Cambodia to experience the Mekong in is Kratie, a small fishing village about a day’s bus ride from Angkor Wat. The town is not very large and like everywhere else in the country, hotels are cheap and food is even more affordable.

There are a few ways to get around town, either by bicycle, tuk-tuk, or renting a scooter. I opted to rent a scooter because it was the fastest and cheapest option. Most hotels even grant a scooter with a room rental, I recommend checking online when booking to find out. If you have no experience driving a scooter, being in Cambodia would be the perfect time to learn. Very similar to riding a bike, there are no gears to worry about, just a handbrake. If traffic makes you anxious, just emulate what everyone else is doing, beep the horn frequently and look ahead, and you will be alright.

Kratie is a fishing town, first and foremost. The majority of men make a living by fishing the river. The one market in town is a fish market, and it was very exciting to walk through, the smell was powerful but if you are ever in this town, make the trip. Much of the fish is sold locally, going to feed people who live within a day’s travel, but some of the fish even makes it to Phnom Penh. 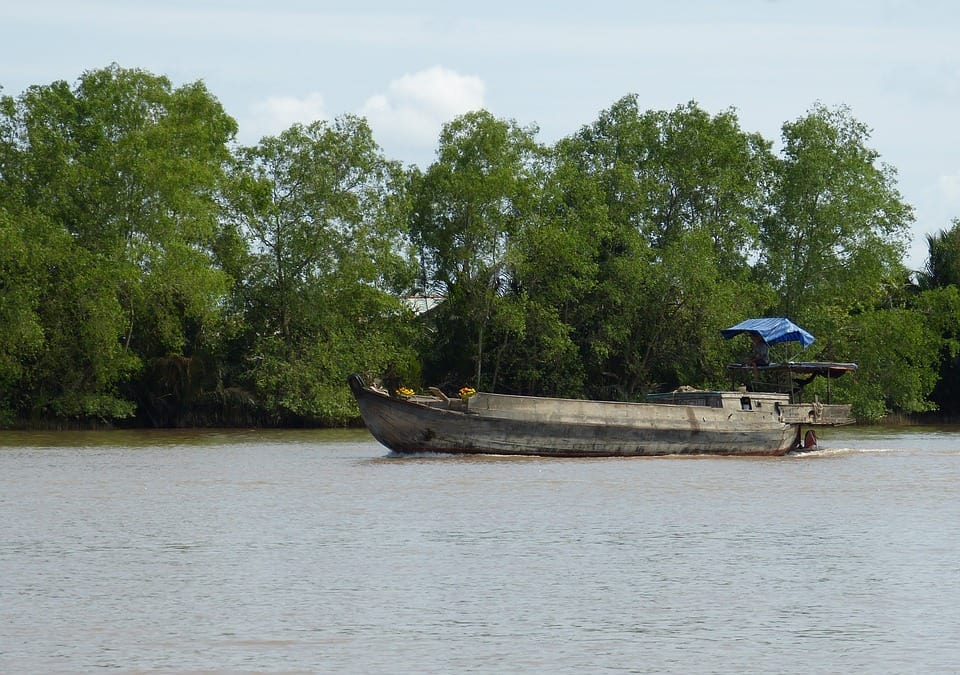 As Cambodia industrializes with the help of Chinese investors, Phhom Penh grows ever larger. The countryside is quickly emptying as people head to the city to find work. The Mekong River flows right through the urban area, and offers an excellent shipping route. Barges go up and down the river, using Kratie as a strategic place to load up on supplies, especially fish.

Experiencing the Cambodian countryside meant the brutalities of the country’s history were on full display. Many individuals were missing legs and arms. This is due to landmines that were placed and then forgotten. There are also banners warning tourists against partaking in child slavery, a common enough problem in this area of the world to warrant a sign. In poor countries such as Laos and Cambodia, young girls are often sold into slavery, some making their way to Bangkok and other countries. If you are traveling to Southeast Asia, just remember the true cost of tourism, and please don’t partake in the darker side of the backpacking culture.

The main draw to Kratie are the Irrawaddy Freshwater River Dolphins. As the name implies, these dolphins live in the Mekong. Once a thriving population, their numbers have declined dramatically due to pollution, fishing nets, over fishing, and dynamite fishing. The WWF has built a large facility in town encouraging fishermen to see the benefits of the animal while building a tourist infrastructure around them.

These animals are so isolated and endangered that only about 35 individuals remain, truly one of the rarest species on the planet. These dolphins look very different from their ocean going cousins. They are smaller than the Bottlenose, and almost blind. Living in the murky waters of the Mekong, they do not rely on sight, and instead use their sonar to navigate. They also have a blunted head and break the water only during mating season. When I saw them, they were hunting, coming up for breath every couple of minutes.

There are boat tours that provide the service of taking tourists into the river to photograph the animals. Per person, this tour costs $20 USD. Comparing that to an Elephant Sanctuary or any other tour group, the Dolphins are incredibly affordable. After motoring out to a common spot to see the dolphins, the captain turned off the engine and we waited for the first sighting. I was able to hear them before I could see them.Their entire backs left the water as they breathed, and pods of dolphins chased fish to the surface. Not knowing where to point the camera, everyone on the boat stayed vigilant, and a serenity overcame us as we witnessed these majestic creatures. Everyone I was with realized how rare an experience we were having.Within our lifetimes, there is a very real possibility of losing the Irrawaddy River Dolphin forever. 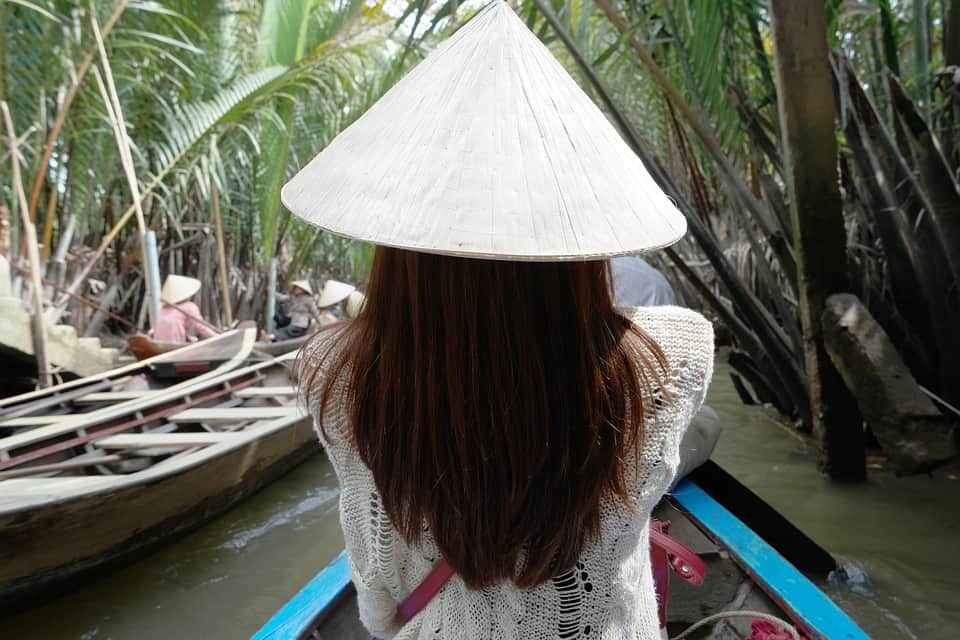 Being so close to a pod of rare animals was heart-stopping, I feel strongly that more people need to make the trip, as only with strong ecotourism can this endangered species be seen as an economic necessity for the region, leading to more protections. As of now, fishermen still must fish to make a living, and the River Dolphin is the one to lose out.

The Mekong River is a sight to behold and for many tourists, it does not make the list of places to visit. If you are planning a trip to Southeast Asia, be sure to include the Mekong River and the Irrawaddy River Dolphin.This hidden corner of Cambodia offers enormous potential. Cambodia is still a rural country, I am happy I took the time to slow down and experience life in Kratie.