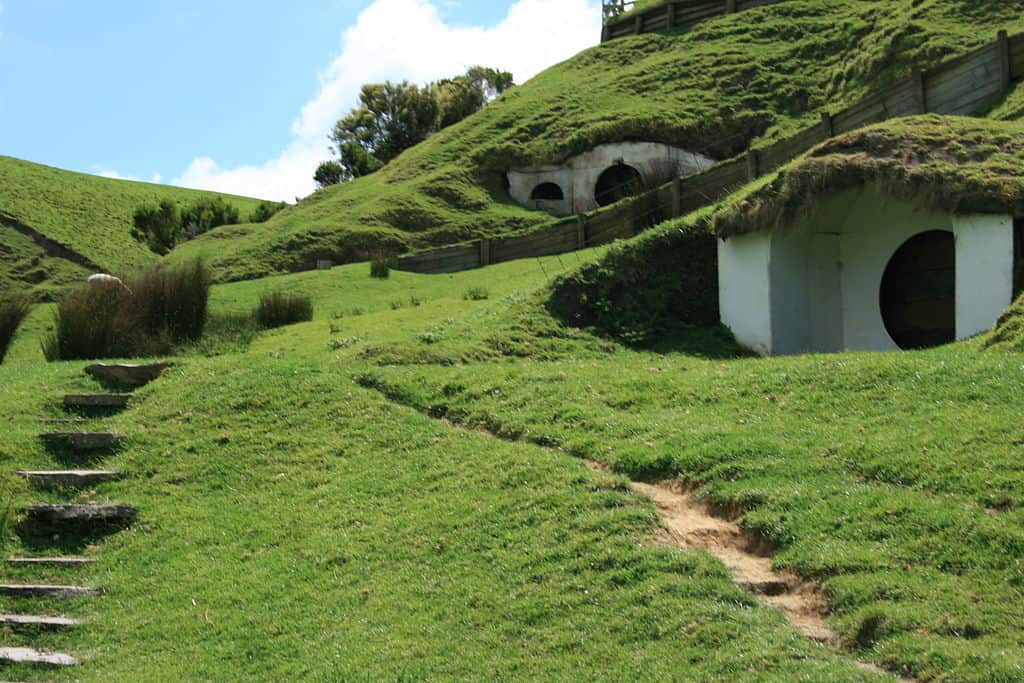 Are you willing to take the road less traveled? While your friends are all partying at the beach this summer, consider something a little more unique. You’ve been to the beach—and while they’re not all the same, they’re not very different, either. Perhaps you’ve even been to the top best beaches in the world for families, but sooner than later, the beach does become a bit boring. So, are you ready to travel to some places that have no equal anywhere else in the world? Make your next vacation your most memorable one yet by checking out these unique destinations and experiences. We’re sure that no matter which one you choose, you’ll have an amazing vacation.

The world’s most populous and third-largest country, China has a lot to offer. From the Great Wall in Beijing to soaring modern metropolises, China boasts attractions that many countries could only dream of. And though it’s easy to associate tourism in China with the country’s 5,000-year history, some of its unique attractions are modern wonders. One such attraction is the glass bridge found in Zhangjiajie. While certainly not the only glass bridge in the world, it is the highest and the longest.

A whopping 300 meters above ground and 430 meters long, this glass bridge opened in 2016 to much fanfare. Its glass bottom encourages you to look down—and see the ground 300m below. Worried that it might fall? Don’t be. The bridge has passed rigorous tests—and can even support the weight of a car full of passengers. This unique place provides the perfect combination of thrill and wonder for the whole family!

The great pyramids are one of the most popular tourist destinations in the world—and they’re unlike any other place. These mysterious structures have fascinated the world for thousands of years. 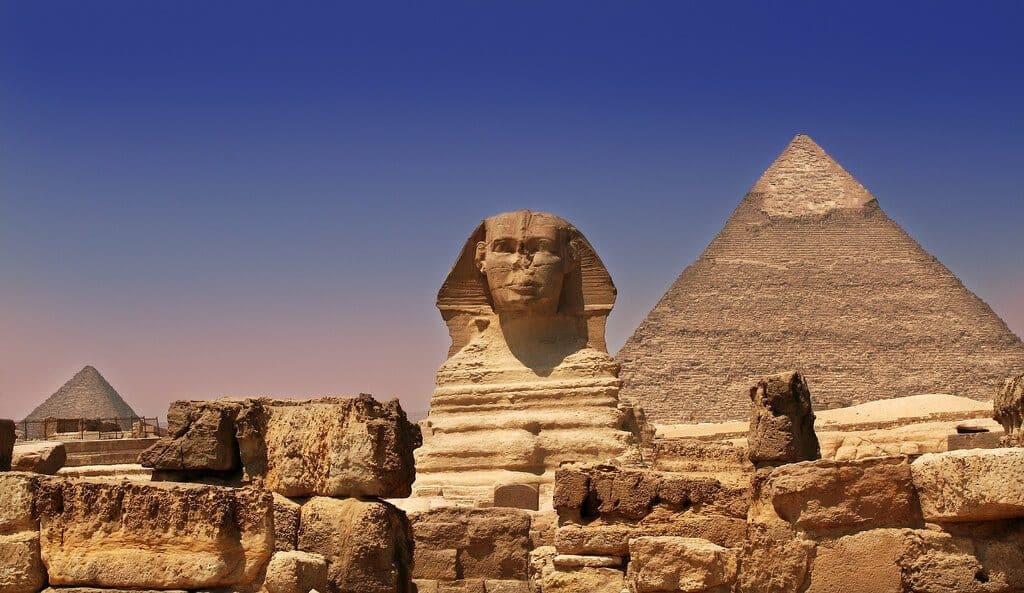 Even modern audiences have a lot to wonder at as they tour the inside of these ancient structures. Enter the world of the pharaohs with an unforgettable trip to Egypt. From the pyramids, you can see the wonderful cityscape of Cairo—giving you the best of both worlds. No matter how much you’ve heard about the pyramids—or how many times you’ve seen them on TV—nothing can compare to a trip to Giza itself.

Lord of the Rings fans unite! Now you can experience this fantasy epic like never before with a trip to Hobbiton, New Zealand. 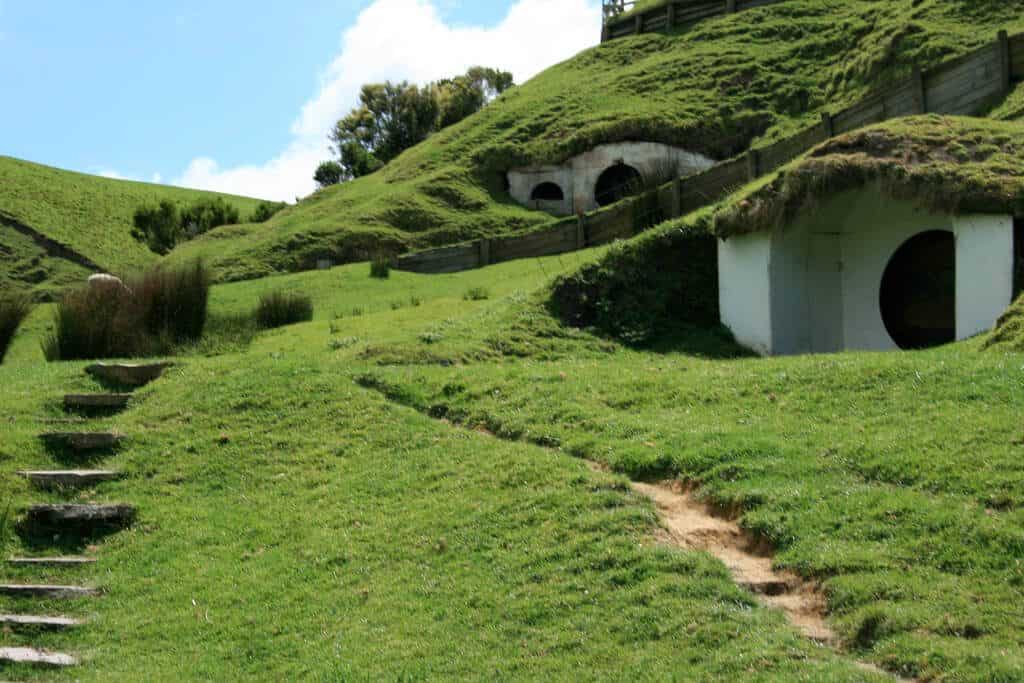 Located in northern New Zealand, this quaint little town models the Hobbit villages found in J.R.R. Tolkien’s best-selling fantasy. With beautiful green pastures and small hobbit homes, Hobbiton literally brings the Shire to life. We guarantee you can’t find anything similar anywhere in this world—well, at least not in our world. The only thing more authentic is the Shire itself. This beautiful area was home to filming for The Lord of the Rings and The Hobbit trilogies. Perfect for fans of both series, Hobbiton is a unique place to visit in New Zealand.

It doesn’t get any creepier than Hunyad Castle in Romania. This staggering medieval relic is believed by some to have inspired one of the world’s most-famous horror stories—Bram Stoker’s Dracula. Built in the 14th century, this ancient castle is one of the largest in all of Europe. Now, the castle is a favorite site of those looking to film from everything from movies to TV shows. Fabulously-restored, this Gothic castle has seen several renovations over the centuries. 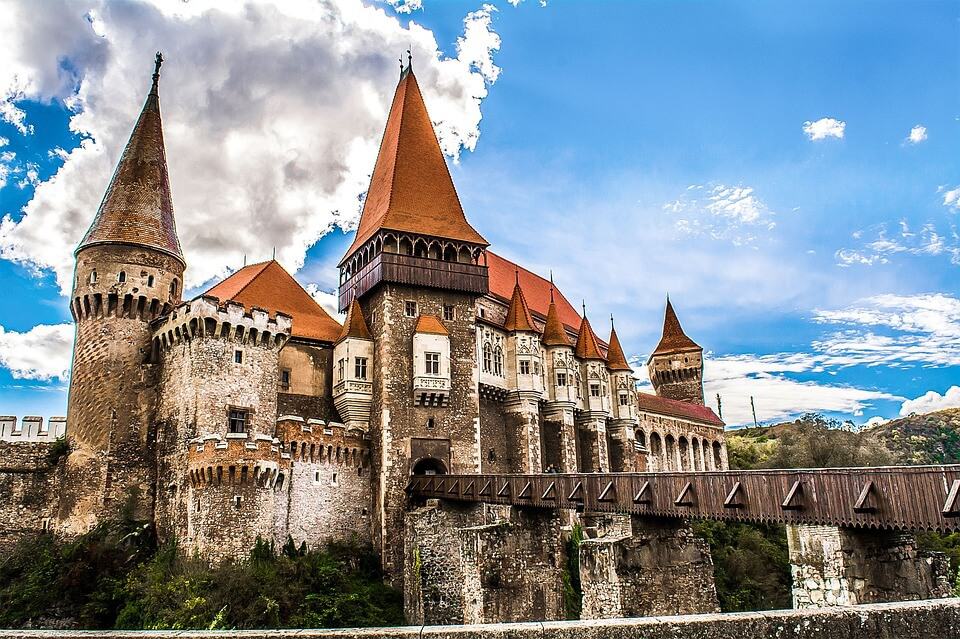 Now, open for tourism, Hunyad Castle is great for the entire family—or even for those looking to just go alone. And though it’s certainly not the only castle in Europe, Hunyad’s rich history and unique folklore set it apart from all others.

France’s Mont Blanc has come to be one of the most-storied mountains in the Western world. This famed mountain lies in the Graian Alps and has become intricately embedded in the history of English literature. Appreciation for Mont Blanc reached its peak during the Romantic era, with some of the period’s most famous poets using it as inspiration for their endearing masterpieces. It even makes a striking appearance in Mary Shelley’s Frankenstein as site of Victor’s confrontation with his monster. The subject of one of Shelley’s husband’s poems, Mont Blanc remained the source of much literary inspiration for much of the Romantic period. Now, Mont Blanc has become a favorite spot for climbers and other sports adventurists when visiting Italy or France. 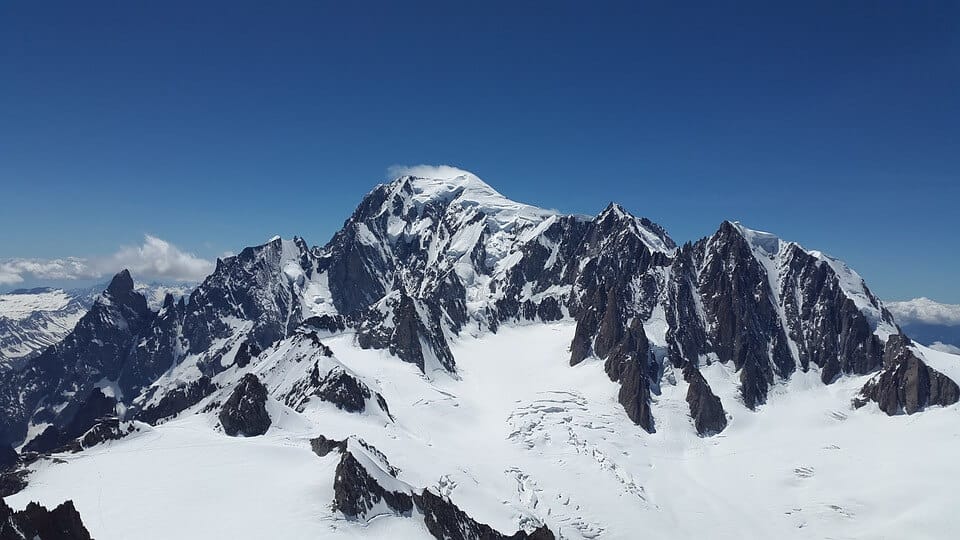 What really sets Mont Blanc apart, however, is more than just the fact that it’s one of the highest mountains in Europe. That’s because those who are visiting Mont Blanc get to see first-hand the beauty that has inspired countless works of art across the centuries. Because of this, Mont Blanc has something to offer to everyone—even the more artsy and bookish types. And, of course, it’s great for mountaineering, too. 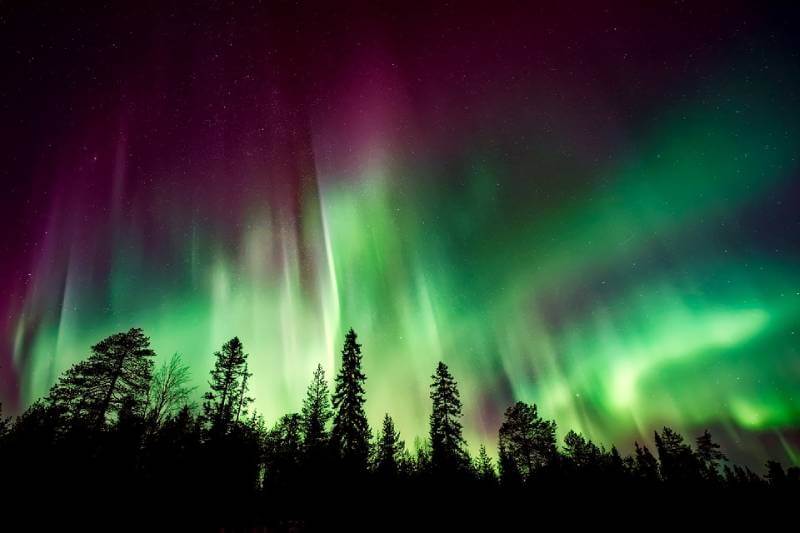 Created by the collisions of atmospheric gasses, these lights are perhaps best viewed in the frigid regions of the Northern hemisphere in places such as Norway and Canada. They’ve become so popular, in fact, that millions of tourists make the trip to see these lights every year. If you plan on making a trip to see this jaw-dropping natural wonder, make sure you bundle up. But trust us: seeing these lights in person will make it all worthwhile.

One of the lesser-known wonders on our list, the Perito Moreno Glacier provides a breathtaking view of a 10km expanse of pure ice. 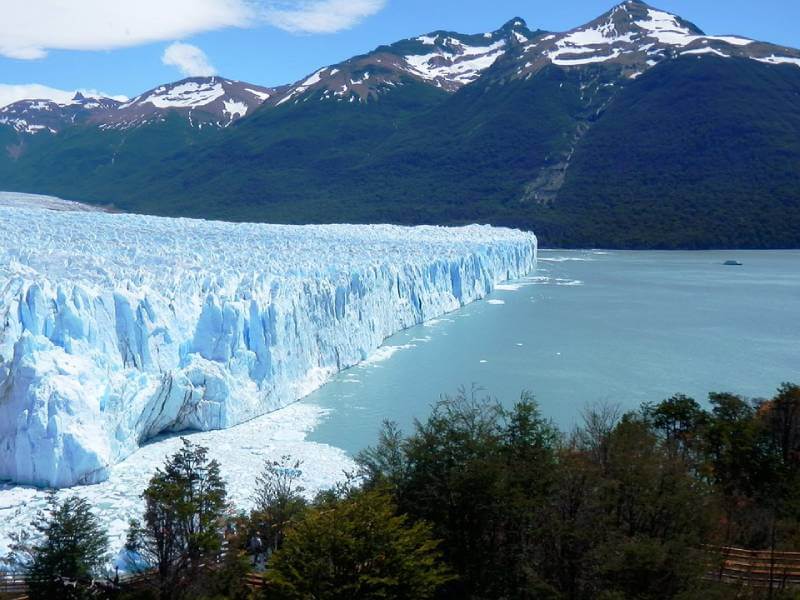 This frozen-white scenery looks like something straight from a fairytale. Though the cold temperatures can make this destination less accessible than others, seeing this glacier first-hand is a treat unlike any other. Those who make the trip to see the Perito Moreno Glacier compliment the unbelievable and pure beauty found in this expanse of frigid Argentinian wilderness. And while in this part of the world, there is just so much to do with kids in Argentina.

Jeju Island is one of the most popular tourist destinations in Asia—especially for South Koreans. But this historic island is home to some of the region’s most inspiring natural wonders. 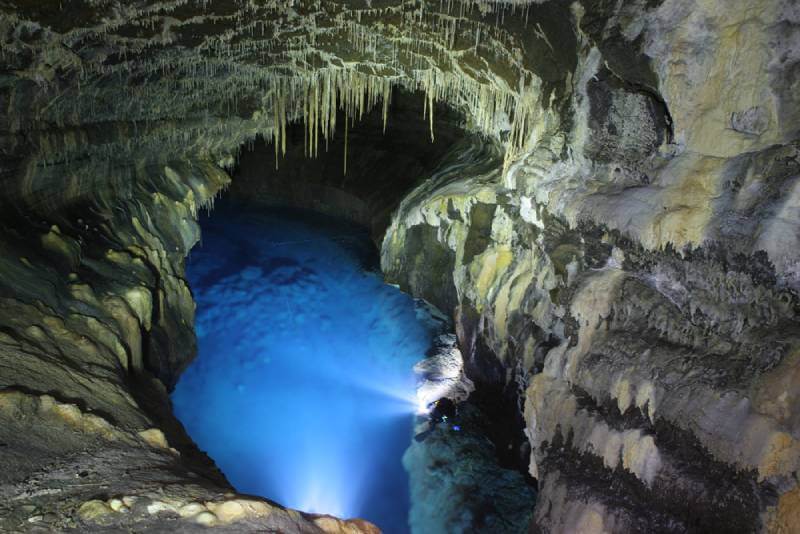 For example, a network of lava tube caves under the island makes for a breathtaking view. These lava tubes come from Jeju’s volcanos and make for one of the most unique travel experiences you’ll ever encounter. See Jeju in a brand-new light by traveling the expanse of these awe-inspiring caves. Made from petrified lava, these tubes are sure to leave you and your family excited and content with your trip to South Korea.

Those looking for more underground fun can visit the underground river in the Philippines. This great wonder was recently nominated as one of the seven new wonders of the world. 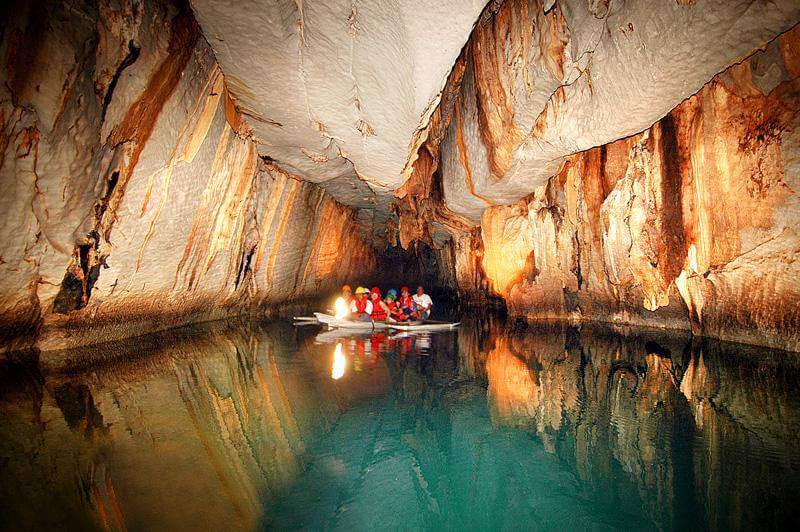 Officially dubbed the Puerto Princesa Subterranean River, this body of water runs for an impressive 8.2km. While making your way downriver in a canoe, you can check out the various limestone formations in this underground structure. One of the most unique natural wonders in the world, this great tourist destination should be at the top of every traveler’s bucket list.

There’s more to China than Beijing and Shanghai. The Shilin Stone Forest proves to be one of the most unique tourist destinations on our list. Wondering what sets this forest apart? You may have already guessed it. 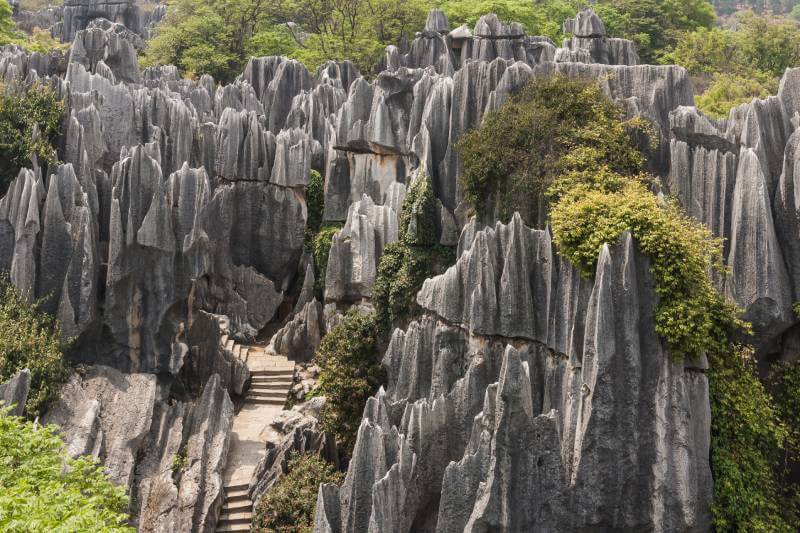 The “trees” in this forest are all made from stone—a natural wonder that has boggled the mind for many. These rock formations are at least 270,000,000 years old and hold a place in natural folklore.

A magnetic hill, also called a ‘gravity hill’, is a place in Canada well known for its illusion. As the name would suggest, the region seems to have magnetic properties, which in this case, would make it look like the gravitational force of the world is upside down.

This is most apparent, when one looks at free-moving objects, whether it is a car or water, going against the direction of gravity. In other  words, cars appear to move uphill, rather than downhill, against the force of gravity. This is of course, just an optical illusion, rather than some unusual geological phenomena. The gravity in this part of the world is no different than anywhere else. The reason why this happens is due to the way the hill is shaped, where the hills are sloped in such a way, that it gives the appearance of a downhill slope being that of an uphill.

This is phenomena in nature, where there is the expulsion of what can be called ‘blue lava’. Found in Indonesia, the Blue lava phenomena are unique to the Kawah Ijen Volcano. To put it in simple words, this is one of the few volcanoes in the world, where one gets to find blue-glowing lava.

The volcano itself is located in the Banywang Regency of Java and is a popular tourist attraction in the region. It is famous for its electric blue colored lava, which is something rather rare in the natural world. The nature of the blue lava remained a mystery for a very long time until studies found out that the cause of the blue glow was a high concentration of sulphur, which gave off the coloration as it burned.

This is another interesting phenomenon, which is best viewed during night times and found just about any major coastal region in the world. As the name would suggest, the beaches and seashores, which sometimes extends into the distant waters, glow almost in an unnatural way.

The reason for this is because of microscopic organisms, which give off their own light, through what is called ‘bioluminescence’. In simple words, the waters and the beach are inhabited by tiny microorganisms, which give off a light, usually of blue or green color. This, when observed with the naked eye, appears as if the beach or the water itself has a glow to it. The phenomena are fairly widespread in the world, and are best viewed during the night or in low lighting levels.

The best time to view frost flowers are during late autumn or early winter. They form on long-stemmed plants, where the freezing temperatures cause thin layers of ice to form into exquisite patterns, which then curl into ‘petals’ resembling flowers. So, start planning a winter escape to someone where cold so you can see some frost flowers.

The ‘Stone Turning Lake’ is another term for Lake Natron in Tanzania. The lake itself is a mix of legend and scientific fact. The legend goes that any animal that is unfortunate enough to enter the lake, gets instantly turned into stone. And indeed, the many bodies of dead animals that can be found in the region support this claim, at least at face value. But the fact is that there is more to this than meets the eye.

The reality is that the lake doesn’t really turn animals into stone. On the contrary, the lake actually has a thriving wetland ecosystem, which supports a variety of birds, animals and insects. The legend comes from the fact that the lake has a very high pH level (around 10.5), which is strong enough to cause caustic burns. When an animal comes into contact with the waters, the high pH tends to burn away any and all tissue other than bone. The cause of this has been attributed to chemicals like sodium carbonate and other such substances that wash into it from the surrounding hilly regions.

There are so many unique places on earth that you won’t exist, but if you travel more often, you’ll get to come upon them more often!