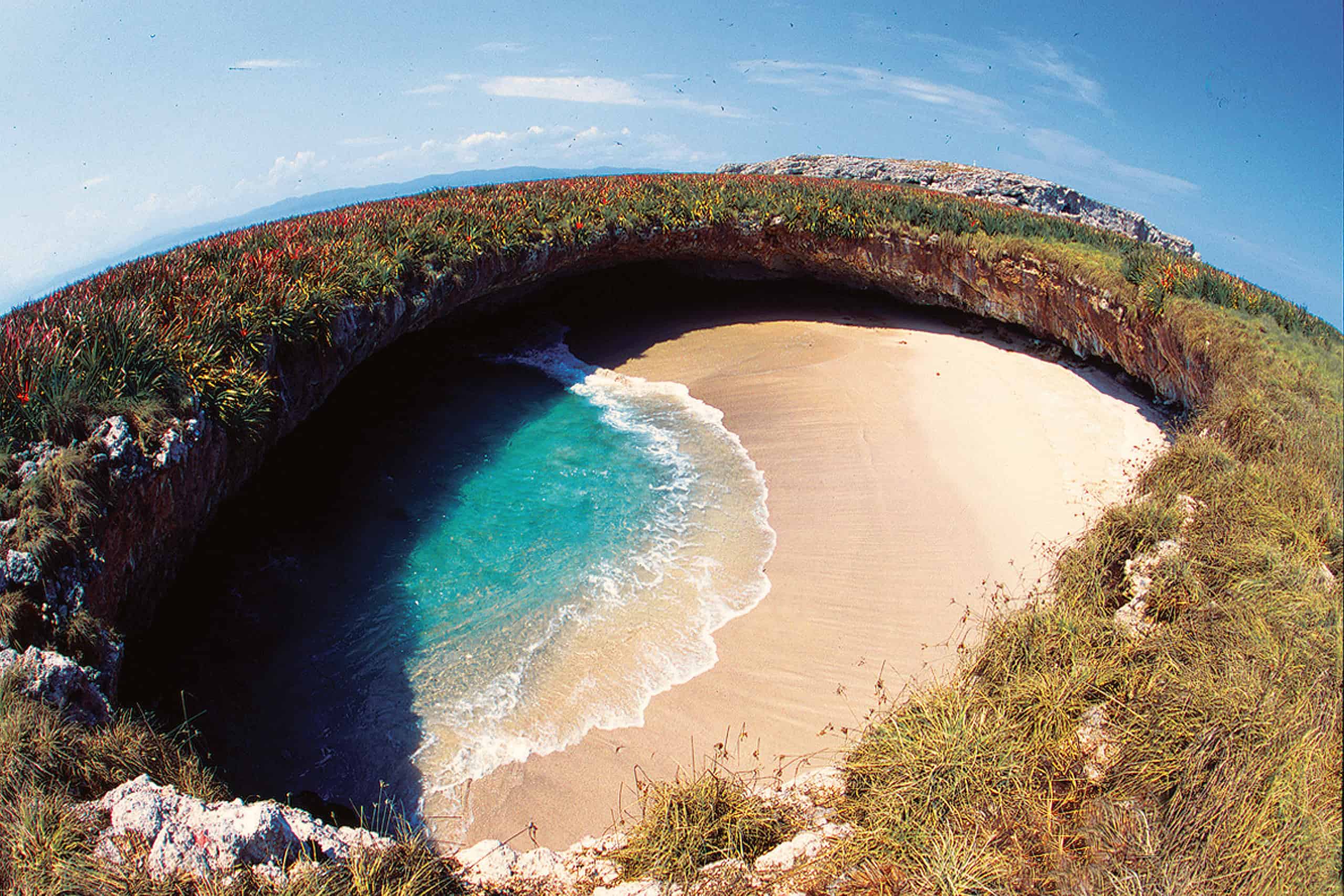 While crystal clear blue waters and white sandy shores are what most travelers think about when someone says “tropical beach,” lately many off-the-beaten path explorers have given up on those. Sure it’s the perfect promise of sun, sand, and sea, but there’s something a little more extraordinary out there. From colorful sands to strange looking rock formations, here are some of the world’s most unique beaches. 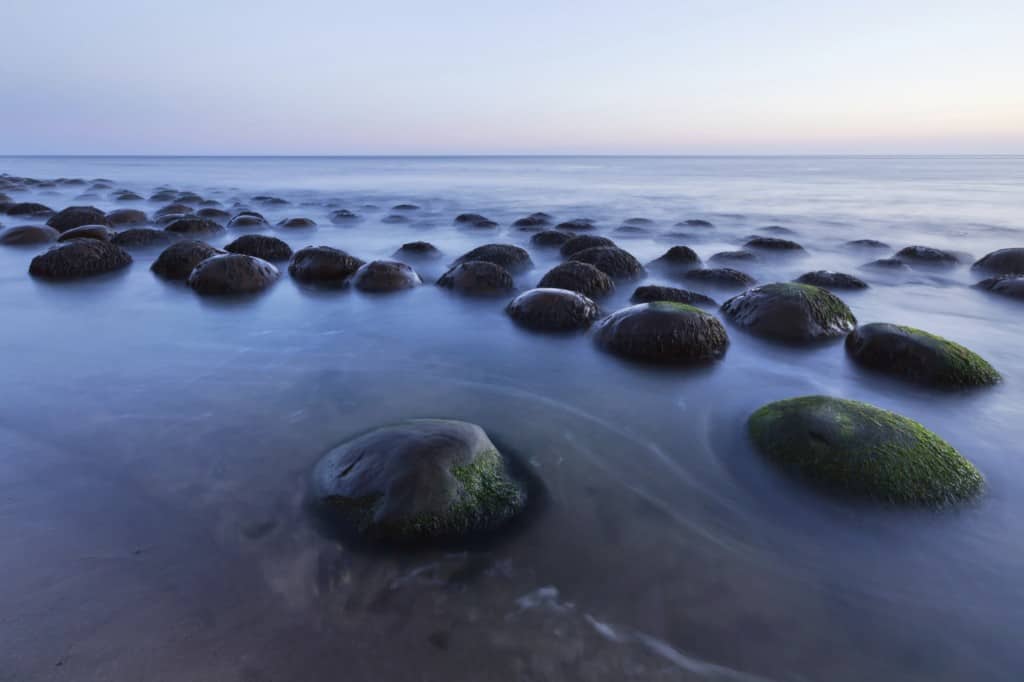 Located at the northern end of Schhoner Gulch State Beach, this area is lined with giant-sized rock formations that resemble bowling balls all along the shore. Numerous visitors stop by here every year to take in the breathtaking scenery. Be sure to visit when the tide is out, as more rocky features are visible. 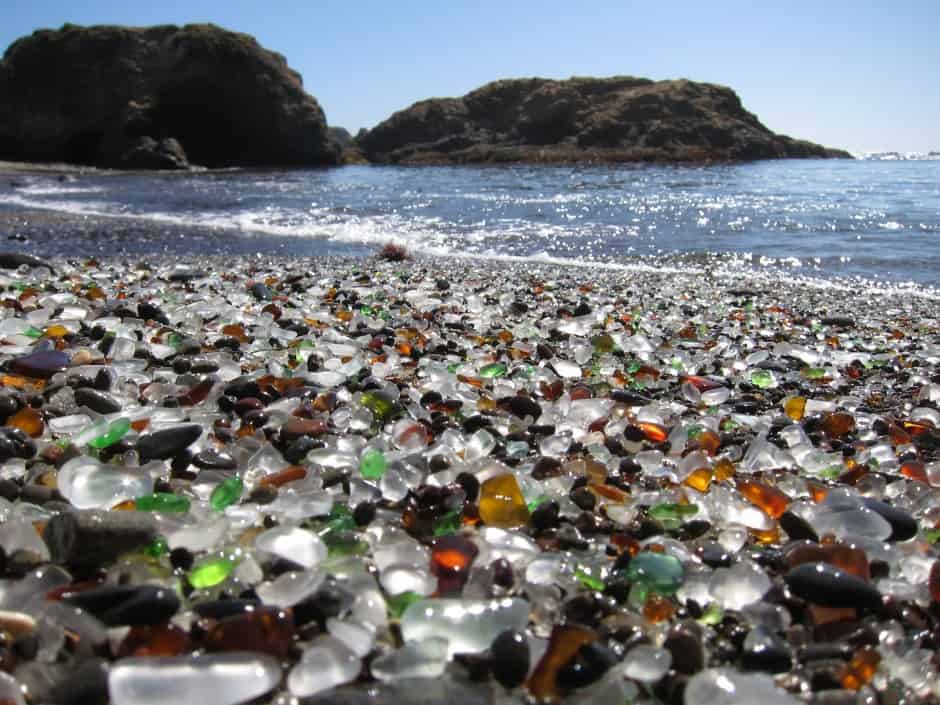 Located near Fort Bragg in California, this unique beach was formed after endless amounts of trash were dumped there by local residents for many years. While the dumping has since stopped, the glass sand itself still remains.

Playa Del Amor or The Hidden Beach is found on the Marieta Islands, located just west of Puerto Vallarta, Mexico. The islands themselves form an archipelago that was initially formed as a result of underwater volcanic eruptions. The Hidden Beach is said to be invisible from the outside, and is only accessible via a long tunnel that links the beach to the Pacific Ocean. 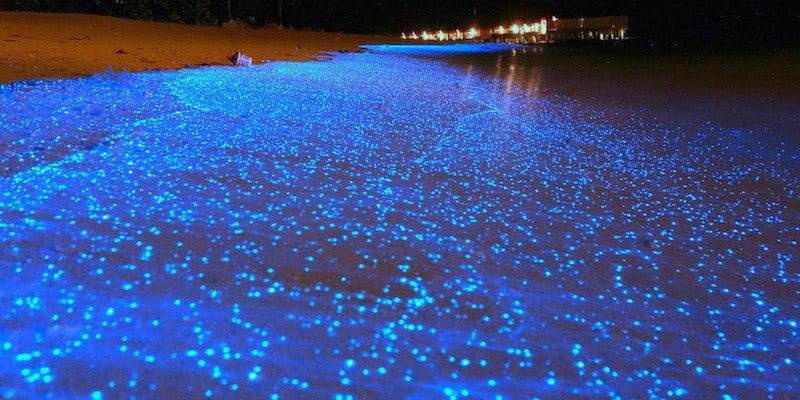 Also known as “Heaven on Earth,”Vaadhoo Island comes to life at night with a host of mesmerizing microscopic bioluminescent phytoplankton that light up when agitated by the surrounding surf. The blue glow washing up on the shore creates one of the most romantic settings in the world.

5. The Beach of the Cathedrals, Ribadeo, Spain

Running along the western boundary on Spain’s Galician coast is a stretch of sand holding the most unusual geological formations that Mother Nature could conjure. Officially called the Praia de Augus Santas or the “Beach of Cathedrals,” extraordinary rock formations that resemble arches similar to that found in Gothic Cathedrals can be found here. It is said that the pounding of water over thousands of years have led to the formation of these unique arches, cliffs, and sea caves. 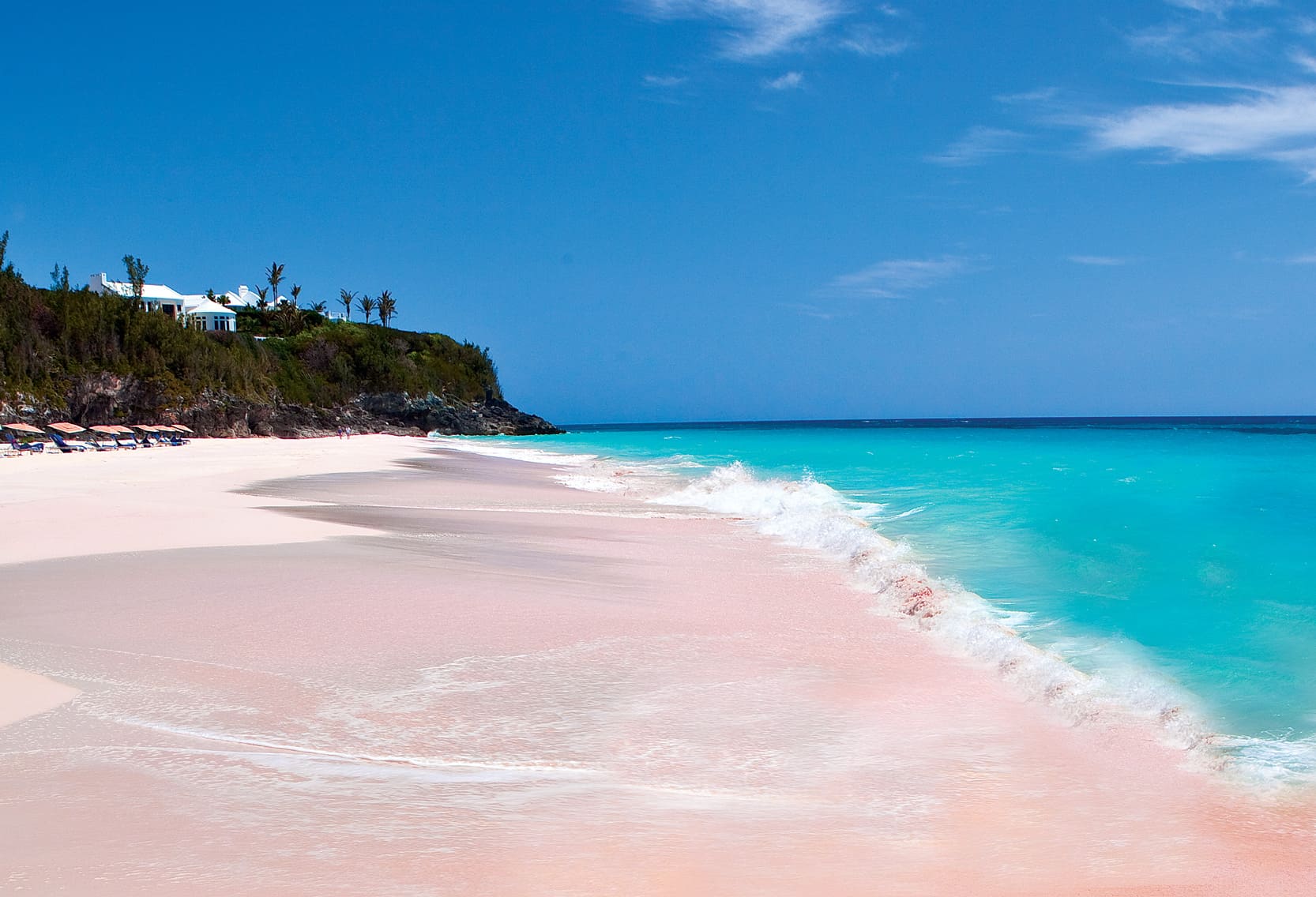 Considered one of the best beaches in The Bahamas, Pink Sand Beach is well known for the soft sandy pale pink colored beach that stretches some three miles. The pink color of the sand arises from washed up coral remnants that have been crushed over time and microscopic coral insects known as Foraminifera which have a bright pink shell. 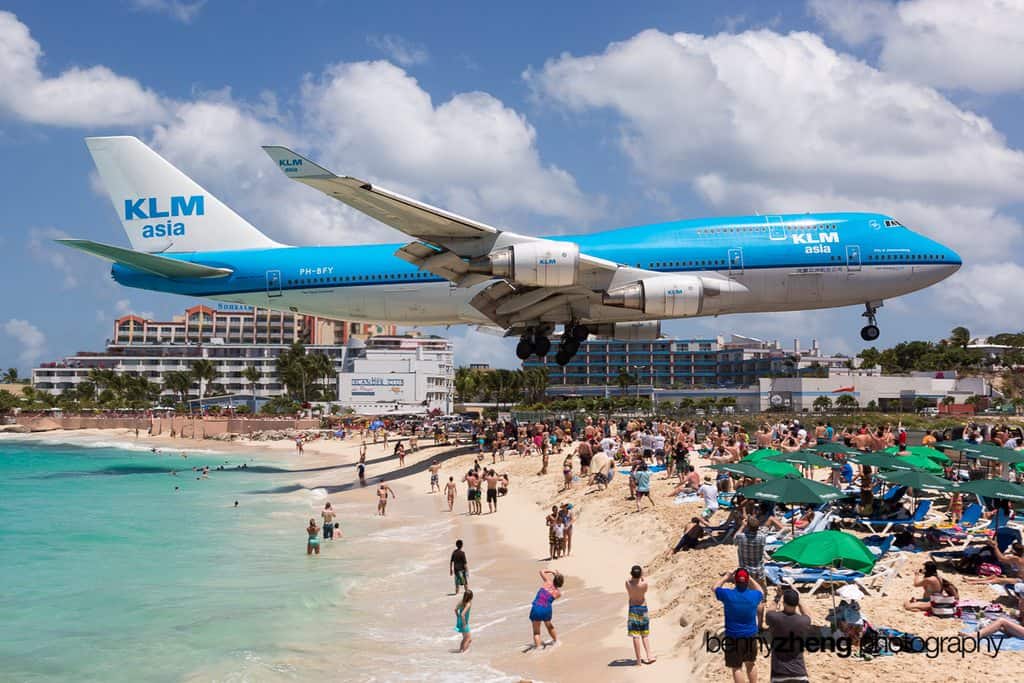 One of the biggest attractions in Saint Martin is the Maho Beach. Not famous for its crystal blue waters or soft white sand, rather Maho Beach has become well known for the nearby airport which is located so close by that it will feel like you can almost reach out and touch the planes as they land. 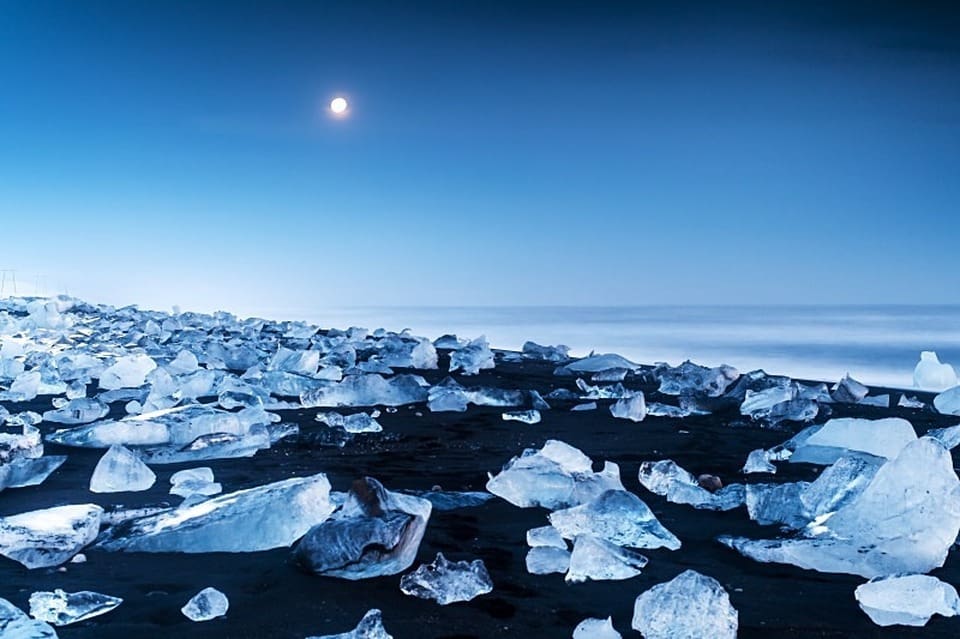 This Icelandic beach is a must see because of the black volcanic sand all round which contrasts dramatically with the clear glassy chunks of ice strewn across the shore. This is exceptionally beautiful at sunrise or sunset as the light illuminates the icebergs. 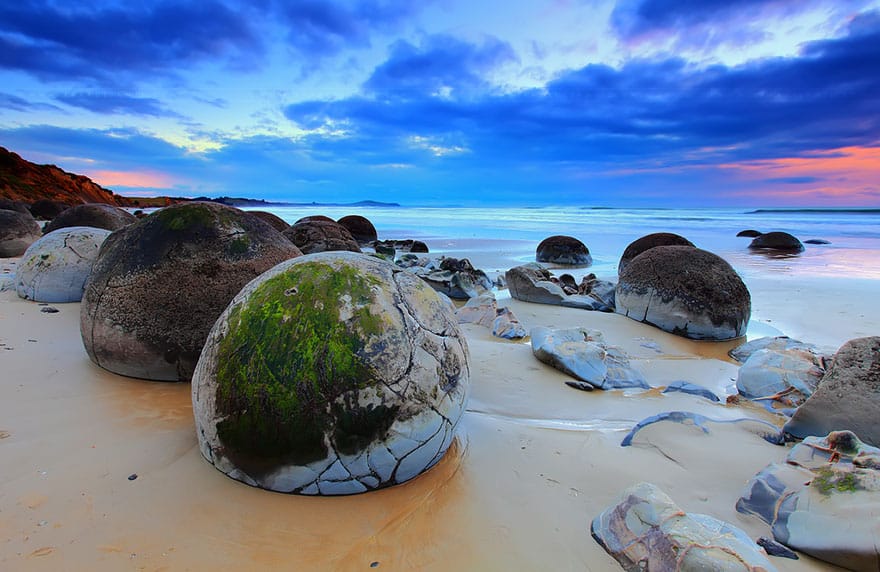 The Moeraki boulders found near New Zealand Otago coast form a group of large spherical stone-like structures that are formed from sedimentary rock and are often said to look like dragon eggs. It’s best to visit here either during the early morning or late afternoon, as the lighting creates some of the best images.

Caused by the silicate mineral deposit, olivine, this green sandy beach offers a unique experience that you will always remember. since the green lava deposits are heavier that many of the other lighter components found in the lava, it tends to stay on the shore, giving it the olive green color. 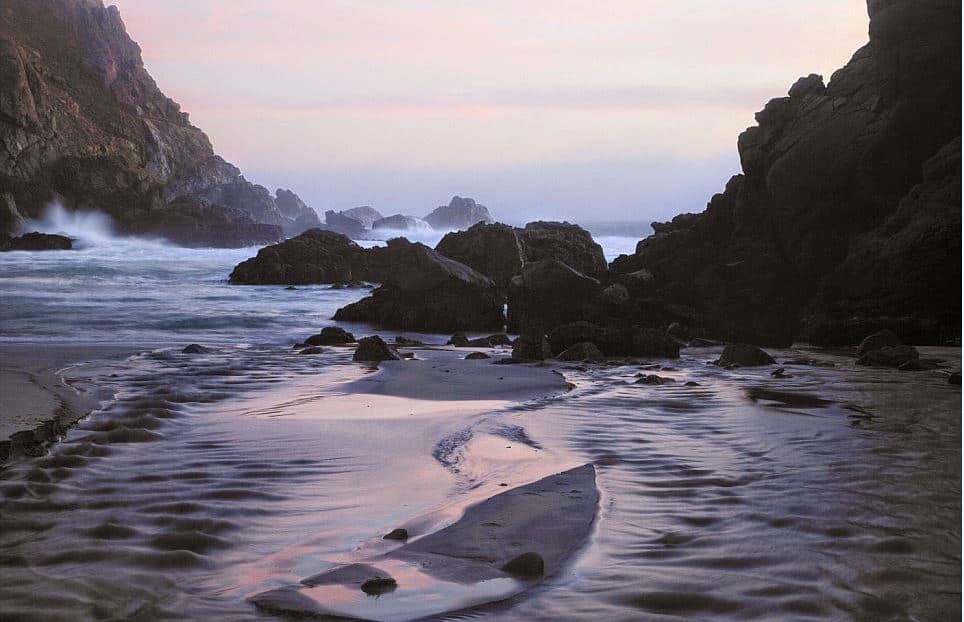 Located somewhere near southern Californian, Pfeiffer beach should be on every traveler’s bucket list. This unique beach is home to purple sand that has washed out from the rocks above. Visit here after rainy weather, as the colors are more pronounced.