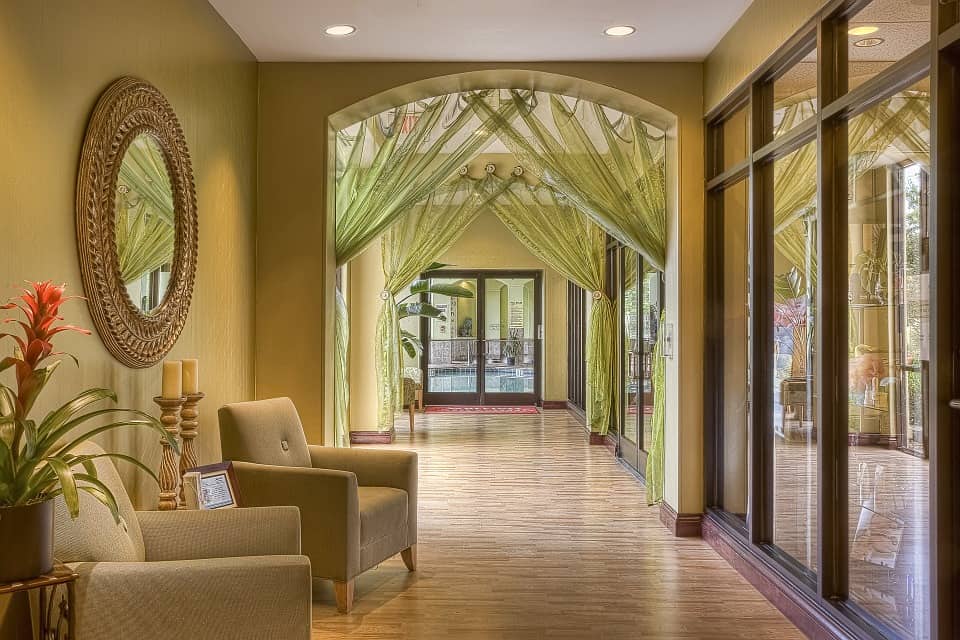 Thinking romantic indulgence? You don’t have to build castles in the air. Here are ten of the best castles turned lavish hotels that will take your breath away.

Romance did not die with the Cinderella story. Forget the stories that 21st-century humans long forgot the meaning of love like Shakespeare explains it. Europe’s got you covered. The European continent is smaller in size compared to America and Asia, but that has not stopped it from being an economic hub. One major contributor to this is its diverse tourism industry, and the hotelier business is at the forefront.

Someone came up with the brilliant idea that not all medieval buildings should be turned into museums and old boring libraries. As a result of that, we now have some of the most lavish castle hotels. Being a travel blogger comes with its perks, and one of them includes sleeping in castles. I made a list of the ten best castle hotels in Europe that you should totally check out:

Nothing screams castle like this fortress in Obidos, Portugal. The history of this place goes way back in time to 718A.D. when it was first constructed. Later, it would be the point where Portuguese troops were dispatched from to beat Napoleon’s army to defeat.

When I first stepped into the walled city that is Pousada, I felt like I was starring in the Game of Thrones(another bucket list ). Starting from the meandering cobbled streets within the hotel compound to the exposed stone walls, the feel of this place is straight out of a fairytale book. If you’re unlucky as I was and miss the tower room, nine other rooms are furnished as either cottages or the more modern classic look. Enjoy the exemplary meals offered within the establishment, and a special Portuguese liquor known as Ginjinha. You’ll love it.

Your wildest fantasies are nothing compared to this 13th-Century hotel that’s part of the Red Carnation lines of hotels. Once home to the Guinness family, this castle is magnificent to the point of making it a member of Leading Hotels of not just Europe but the world! 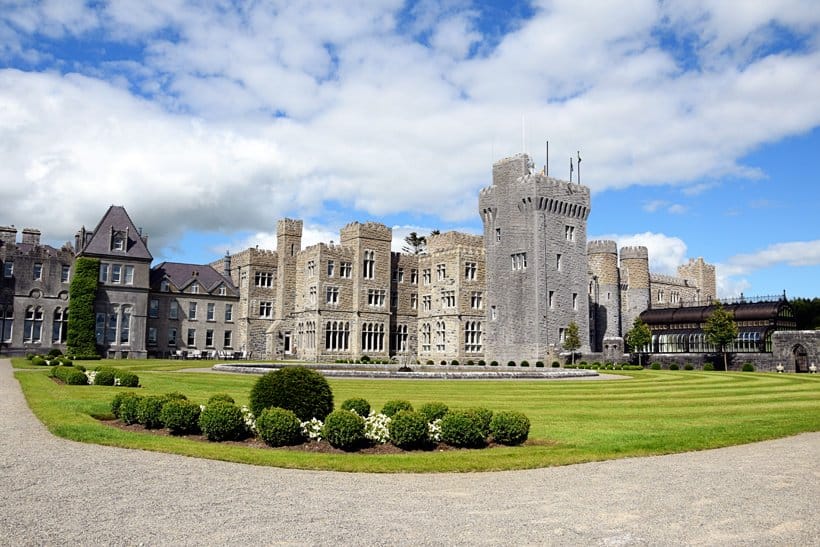 The Ashford Castle sits on a 140-hectare (345.95 acre) woodland in County Mayo, away from the hustle and bustle of city-life. You’ll notice the precision incorporated to the last of detail in the hotel. From the antique furniture to the manicured gardens, from the oak paneling to the turrets and ramparts that decorate the rooms, nothing is left to imagination. You may book one of the 82 rooms and get to enjoy exquisite dinners and afternoon tea at the Connaught room with a breath-king lake view. There’s a long list of activities to pick from, and these include includes falconry classes, boat tours on the lake, a nine-hole golf course, clay shooting, and archery.

Ashford Castle recently underwent a million dollar renovation that saw it redecorated with modern Irish art. There’s also a new red velvet cinema and a water front spa to top it all off.

England may not be crazy-over-heels about romance, but it has its subtleties. Amberly Castle, Sussex is one of them. The castle hotel that boasts original armor-movie architecture is a mere 60 miles southwest of London. First built as a manor house for the Bishop of Chichester, the castle was fortified in 1377. It is 900-years old, so old it is featured in the Domesday Book(you might have to Google that). 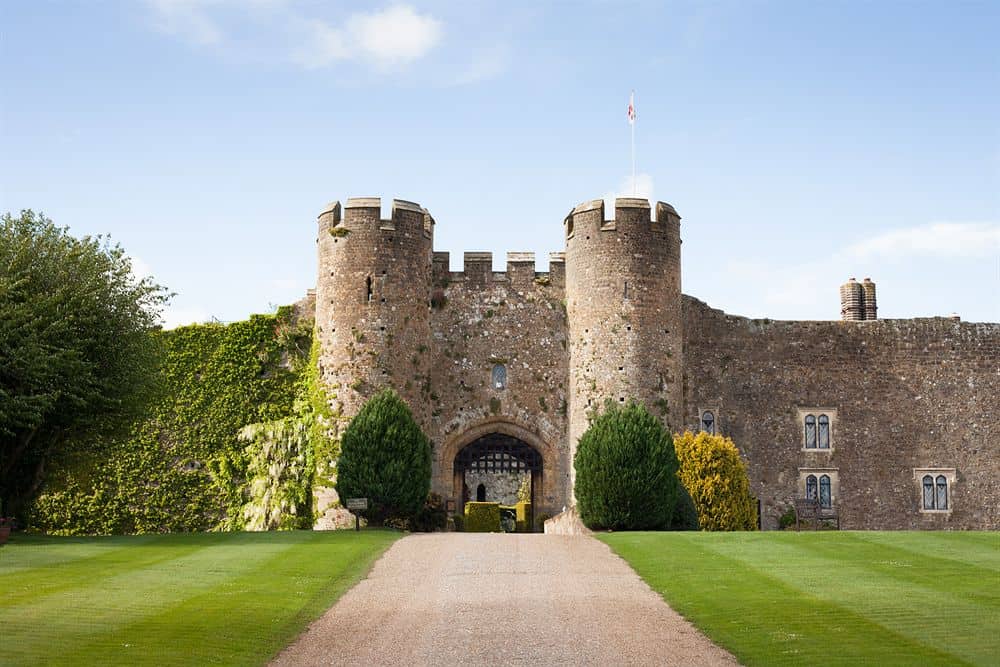 Amberley Castle is not just a gold-mine of history. It offers comfort and luxury all in one. The windows open to landscaped gardens spanning the 12-acre land on which it sits. One of the most exciting features about it is the twin-tower gatehouse that has a lattice portcullis which lifts, just like in the movies. Its rooms are furnished differently, but still maintain the class and style.

Once upon a time in the 1500s, a central tower was built on top of a cliff on Scotland’s western coast by the Kennedy family. Twenty years it would be developed to the grand sight that is the Culzean Castle of Scotland.

The stately rooms of this castle hotel are nothing short of over-the-top. Adopting a very classical approach, the castle hosts an oval staircase that spans around the medieval drawing rooms and a neoclassical library. Apart from that, there are six grand suites exquisitely furnished to world-class level. The hotel is just by the sea, offering picturesque sunsets that will color your dreams for a very long time after you’ve left.

Italy is rich in castle hotels, yet Castello di Monterone from the 11th Century beats them all.

There’s a lot to see in this beautiful Castello. First are the 18 fine rooms with wooden ceilings and huge windows to the Umbrian village outside. The rooftop walkway in particular offers unparalleled views of the same. Inside is an on-site restaurant to indulge your taste buds and a fancy bar with stained windows. 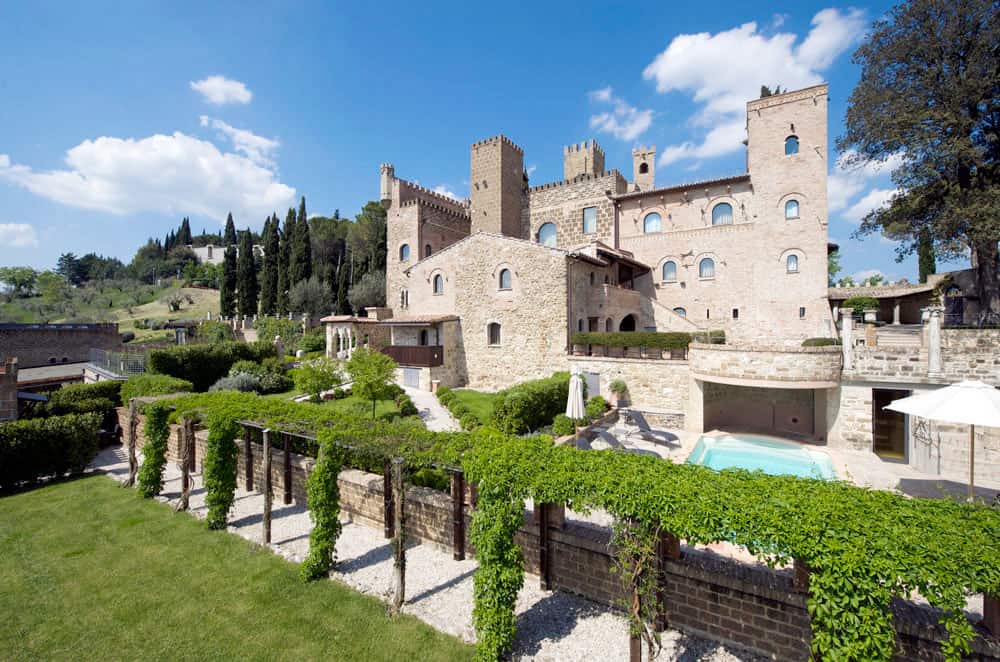 Roses are not just red in this castle, as its garden full of 20 different varieties of roses will tell you. That’s not where it ends. This castle hotel that overlooks the valley of Perugia has a beautiful Turkish Hamam, and an outdoor swimming pool that will soothe your vacationing body just right. You will fall in love here.

It’s not hearsay that the French are the most romantic of people. I mean, they own the copyright of the infamous French kiss, but it gets better. And better is Hotel de la Cite of Carcassone. 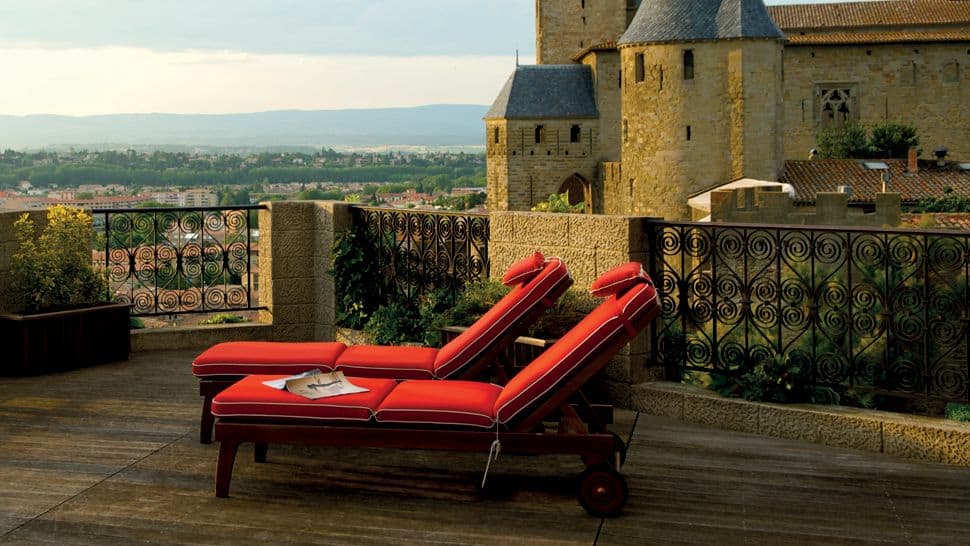 Not only is this castle hotel  Europe’s largest fortified citadel, but it is also the UNESCO World Heritage Site in Southern France. It boldly stands between two historic landmarks, the Roman Chateau Comtal and the Basilica of Saint-Nazaire. The fortress that faces the lush Minervois vineyards has a total of 59 rooms. These include suites that are furnished in traditional style and decorated with a modern touch for ultimate comfort.

The Michelin-starred restaurant within is one to reckon with, and top that off with the nightly live piano at the library bar, and you get the premium holiday package!

The Chateau Herálec goes way back to the 13th century when castles were just that, castles.Back then, it was a home for bishops and aristocrats of the time.Today, the medieval building is a five-star hotel with green English-style gardens and a high-end L’Occitane spa. Some of the highlights of this particular castle hotel are its traditional Czech restaurant and a private park. Aside from its individually decorated 20 rooms, it has a King Suite which is very popular. Here’s a secret; It comes with its very own secret tower!

The hotel which is among the best castle hotels in Europe has a helicopter pad in case the driving distance from Prague is too much.

Austria might make a small part of the European continent, but it still has something to offer. This is the Schloss Igls white castle at Innsbruck.Built more than a 100 years ago, this little-known jewel once served as headquarters for the U.S., German, and French troops during World War III. 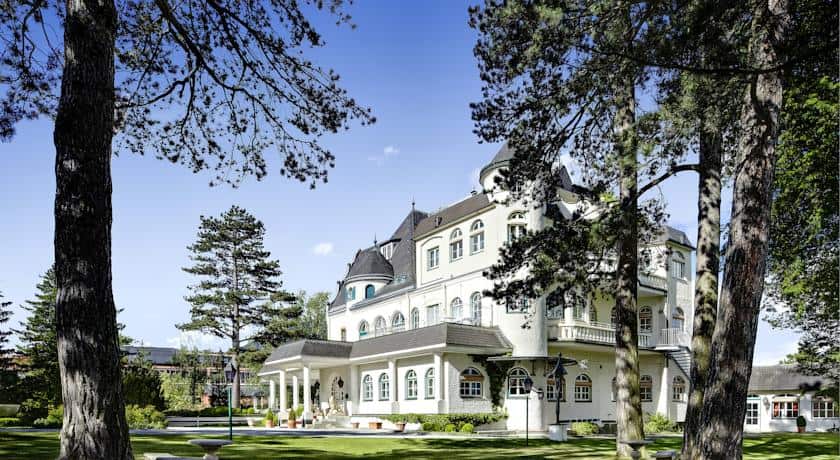 Today, the castle hotel makes for the perfect getaway to the silent traveler who wants some precious alone-time.It has 18 rooms and suites, a chic indoor pool, and a 5,000-square garden with the Tyrolean Mountains playing background. There’s simply no better way to enjoy Alpine bliss.

You’ll probably bite your tongue trying to read this name, but nevertheless, that won’t stop it from making the top ten of the finest castle hotels in Europe. The legend of Sleeping Beauty was shot in this very castle. Whether she slept therein for 100 years as the story goes, we’ll never know. Plus just how unique was this Prince Charming anyway? 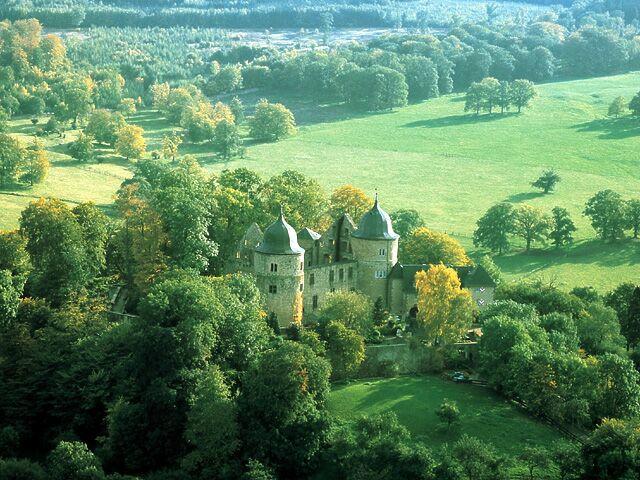 The 650-year-old castle that’s now the hotel as mentioned earlier is set in the heart of the Reinhardswald Forest. You’ll know it for its mightily high walls that are said to be the thorned wall in Grimms’ fairy tale.Unlike other castle hotels where modern adjustments such as free wi-fi and conditioning have been incorporated, the Sababurg has kept its old fashion. This lets you connect with nature by enjoying home-cooked meals in the dining room or taking strolls to the nearby oak forest or the Tier Park Sababurg (the world’s oldest animal park)

Italy makes it to the list one more time, courtesy of the 300-year old Hotel Castello Banfi. This heaven is located in the middle of the splendid Tuscan countryside’s over 7,000 acres of land. 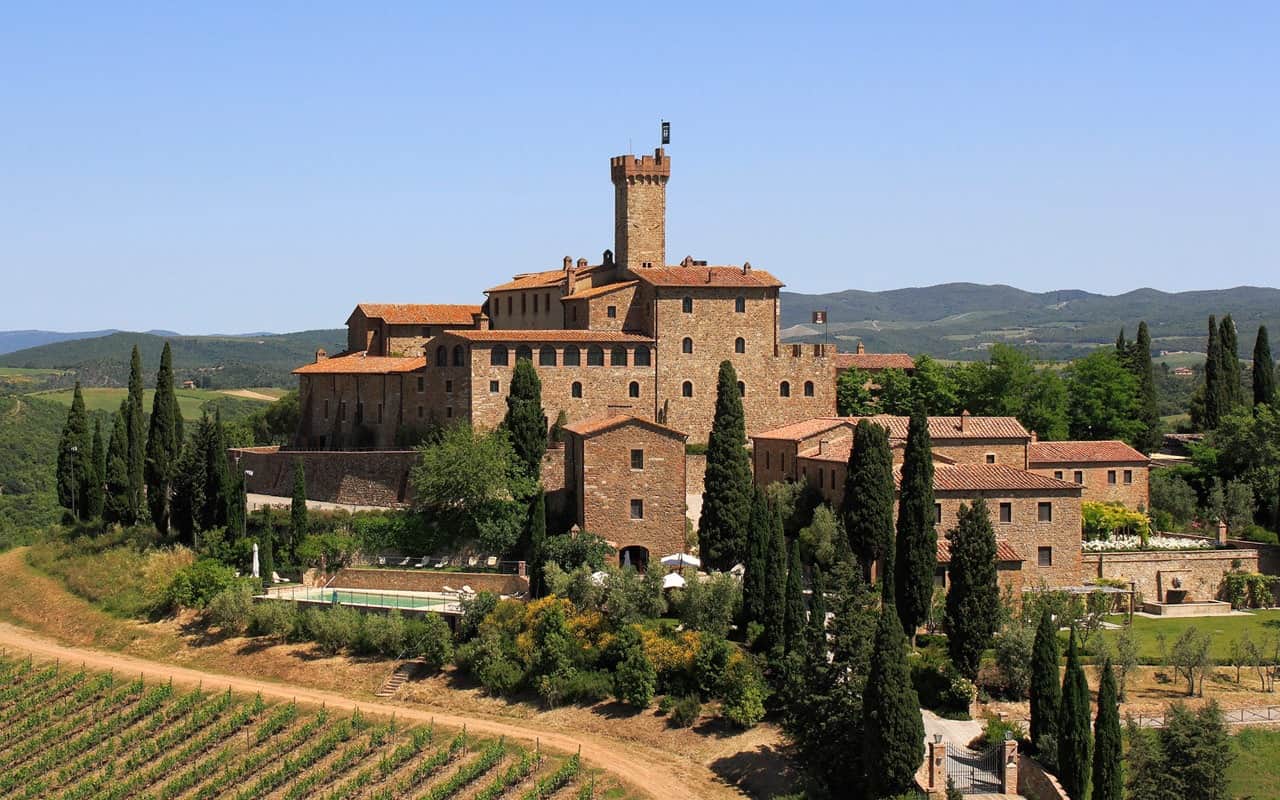 The hotel has 14 accommodation spots(9 rooms and five suites), and its wooden beams, bricked archways, and terraced grounds are spectacular. Aside from these, the fortified village set on a hill has vineyards that offer not just the best of red wine but a relaxing, exotic atmosphere. Other extras include a glass museum, a beautiful swimming pool, two on-site restaurants, and a wine shop.

These are just some of the castle hotels that make a great holiday destination for couples. Feel free to explore. It’s only one life, isn’t it?