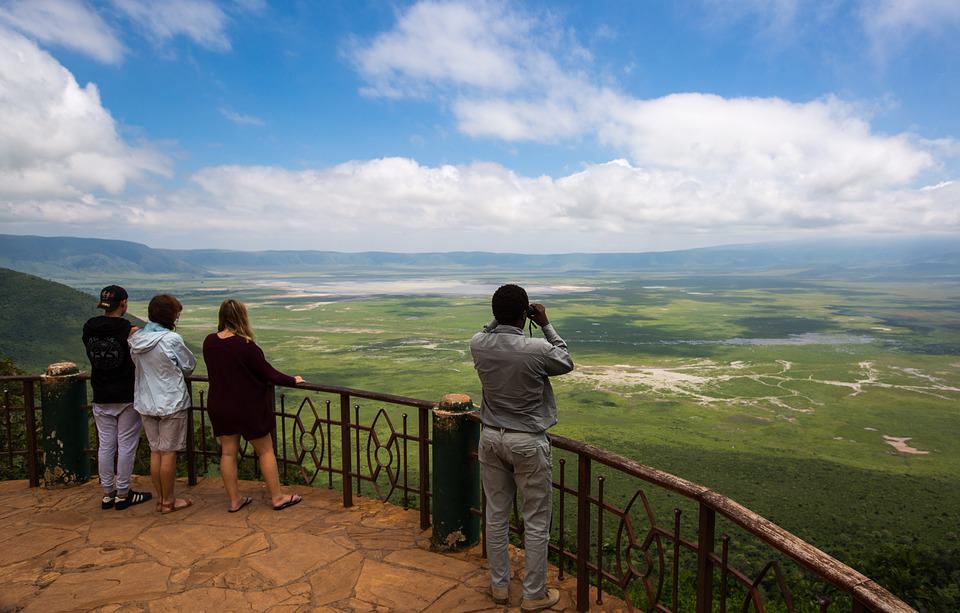 I looked around for the train, but all I saw were people sitting in chairs and waiting for the same thing as me. My pack felt heavy on my shoulders, and my travel companions yawned or looked for a booth to grab last minute snacks for the trip. The train station echoed with noise, and the walls appeared shabby and tired. We arrived on time, and it seemed like the train was nowhere to be found. I walked to a far wall, removed my pack, and waited. People stood in line or fanned themselves to keep cool. This was the middle of the night,mosquitoes flew in the air, and the atmosphere had lost its daytime life. I grabbed my pack, walked outside the station, and stopped at the tracks. Other waiting passengers looked outwards, followed the tracks, and waited for any sign of the train. Then a headlight appeared and there came the train — and the beginning of my trip to Mount Kilimanjaro.

Train from Zambia to Tanzania

We boarded the train, walked to our small compartment, and watched as the other passengers shuffled past. I was traveling with friends, we had each other as well as  our belongings, and we had time. I wouldn’t reach Mount Kilimanjaro for a couple more days at least. There was nothing left to do but sit and stare absently. It was still dark, and the only thing I saw outside of the window was thick, Zambian forest. I soon fell asleep.

The train bumped, groaned, and moved slowly across the landscape. My body jumped and shook. The noise was ferocious. The sound of the train was soothing nonetheless, and provided me with comfort. I actually slept like a baby for most of the trip.

During the daylight, we produced our plastic bags and ate the little food we brought with us. Whenever the train came to a stop, we would hand out pieces of our lunch to the folks waving the train on from outside. The train company had passed out packages of soap to us earlier. Children along the tracks loved asking the passengers for the soap with outstretched arms. So we gave it to them, and went about our business.

The TAZAR,  A railroad was built many years ago to connect Zambia to Tanzania. The railroad and the train appeared broken in spots, and I felt myself getting more frustrated the further north and closer to the equator we went. 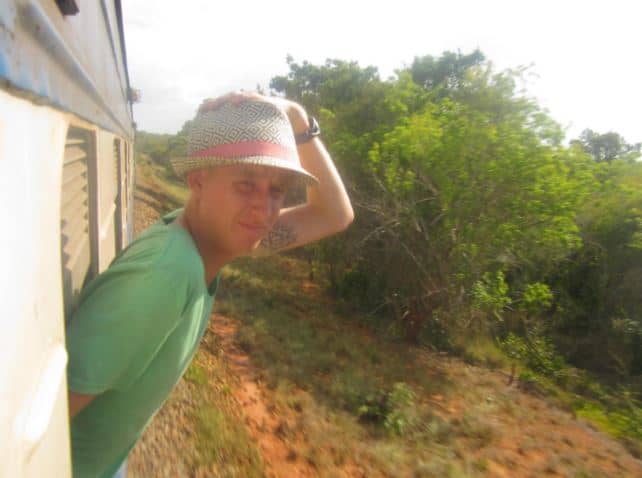 I saw the landscape transform from thick forest to vegetables fields or from rocky outcrops to sunny palm trees. I looked up into the African sky and did not think it was foolish to be on a train. This was a slow journey, filled with inconveniences and bad water and foul mouthed police officers. But it was good. People flew in planes or stretched their legs in coached buses, but I had this train, and it was heading where I wanted to go.

The train pulled into Dar es Salaam, and the air was obnoxious and heavy. My companions and I still had to get to Moshi and the base of Mount Kilimanjaro. Dar es Salaam from the window of our taxi flew by, revealing the sight of locals pulling food carts and fishermen sitting in the shade. We got out at the bus station, and walked until we found a bus going north. We paid some money, found a seat, and I soon missed the comforts of the train. The bus was small, and the air hung all damp and sticky.

The road north bumped and broke and we covered our mouths to keep out the dust. I looked down at my dirty hands, and wondered why we hadn’t taken a plane. I stretched out my legs and rubbed my calves. Then  I remembered why I was going to Mount Kilimanjaro in the first place: to run a marathon at the mountain’s base. I sighed and turned to the window and the Tanzanian landscape outside. The roadside restaurants looked empty, and the locals walked the shoulder of the road to somewhere else. I waved. 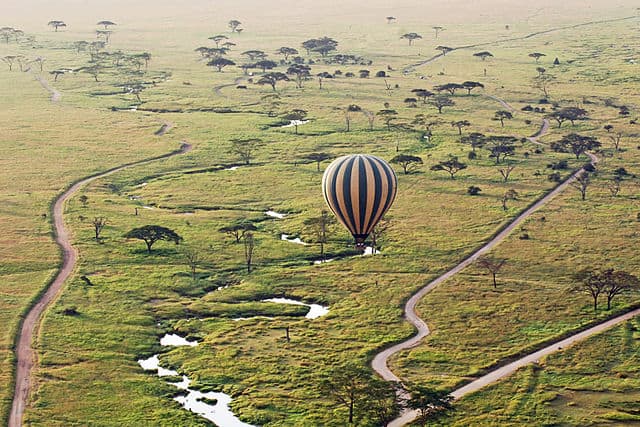 The Serengeti region attracted many visitors each year. Everyone wanted to see the animals. Everyone wanted to take a hot air balloon ride,  and watch the zebras chase the balloon’s shadow. The marathon at Kilimanjaro was the only thing on my mind. Frankly,  I was scared.

The mountain revealed itself without warning. My companions sat helpless, and we didn’t blink because we were afraid it would disappear. Mount Kilimanjaro had no neighbors; it just sat singularly upon a flat plain. Your eyes followed the ridge to the top where snow rested. It dominated your thoughts the closer you got, and I was no longer missing the train ride. I really wanted to touch the mountain.

We stayed at a place called Twiga Home. I remembered it because twiga meant giraffe in Swahili, and it was the word I repeated in my head during the marathon.

We checked in and I thought it wasn’t anything special, as the room was simple and positioned down a narrow path, behind the main road. I washed my hands of the dirt, and went with my companions for dinner in downtown Moshi. People greeted us and offered coffee. More tourists revealed themselves, and I followed them until I saw an Italian restaurant that required a name and a wait.

I ate my noodles, and thought of the marathon I was about to run. I ran only five miles during my training. But I figured I would regret it if I didn’t run. So here I was. Scared and dumb.

My companions all had different ideas on how to spend time. We all went our separate directions, and I was left to walk to the registration building. Kilimanjaro loomed overhead. 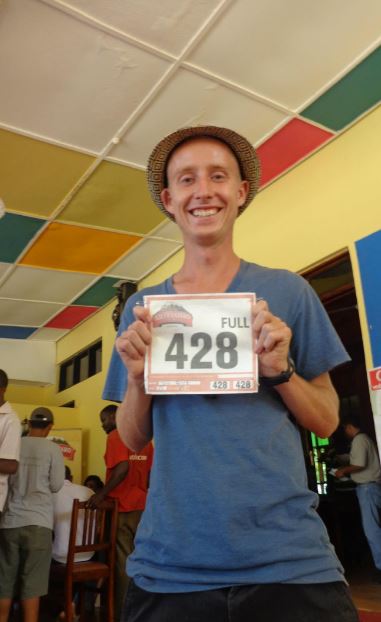 We lined up at the starting line, and I looked around at the sight of the participants behind me and in front of me. We were in Tanzania. It appeared that most of the runners were from Tanzania or from other nearby countries. There were few foreigners.

A boy no older than twelve approached me with outstretched hands. I was busy rubbing my calves when he asked: Can I please have some money so I can run the race? I glanced around and saw other children asking the same thing to different runners. I shook my head at the boy and concentrated: twiga, twiga, twiga. I thought of my own self at twelve-years-old and couldn’t imagine running that far back then.

Hundreds of us waited and then went still until finally the gun went off and we all began our race. The course included ups and downs on the paved roads at the base of Mount Kilimanjaro, and the information I had learned at the Italian restaurant came back into my head: Some people climbed the mountain right before running the marathon. I shook my head, and fell into a rhythm I thought I could hold.

The mighty African runners were up ahead, and there was nothing I could do to keep pace. I couldn’t believe I was running an entire marathon — my ego laughed at me from somewhere in my head. A woman held up a finger and waved it at me. Then the same thing happened a little further on. What was going on? I was the first non-African at that stage in the race. That realization provided momentum until I got halfway. It was like night and day. When the pain started, I knew I was in trouble. The next two hours were spent shuffling and looking for the perfect place to fall over. Why was I doing this to myself?

But Mount Kilimanjaro was watching me, and I couldn’t give up. I was no longer passing people, but I was the one being passed. There was no more water left and the only thing people handed me was cups of warm soda. I guzzled cup after cup. The heat bounced off the pavement and threatened to completely crush my spirit.

I crossed the finish line, and fell into the grass without the slightest intention of ever moving again.

When I opened my eyes and looked up to where the clouds should have been, all I saw was the mountain staring back at me. I was so happy to have run this marathon in Africa, so very far from home. I found my companions and we shared a few laughs. Some spectators approached me and told me that they must have missed me, because they failed to spot me during the second half of the race. I smiled and thanked them for their support. 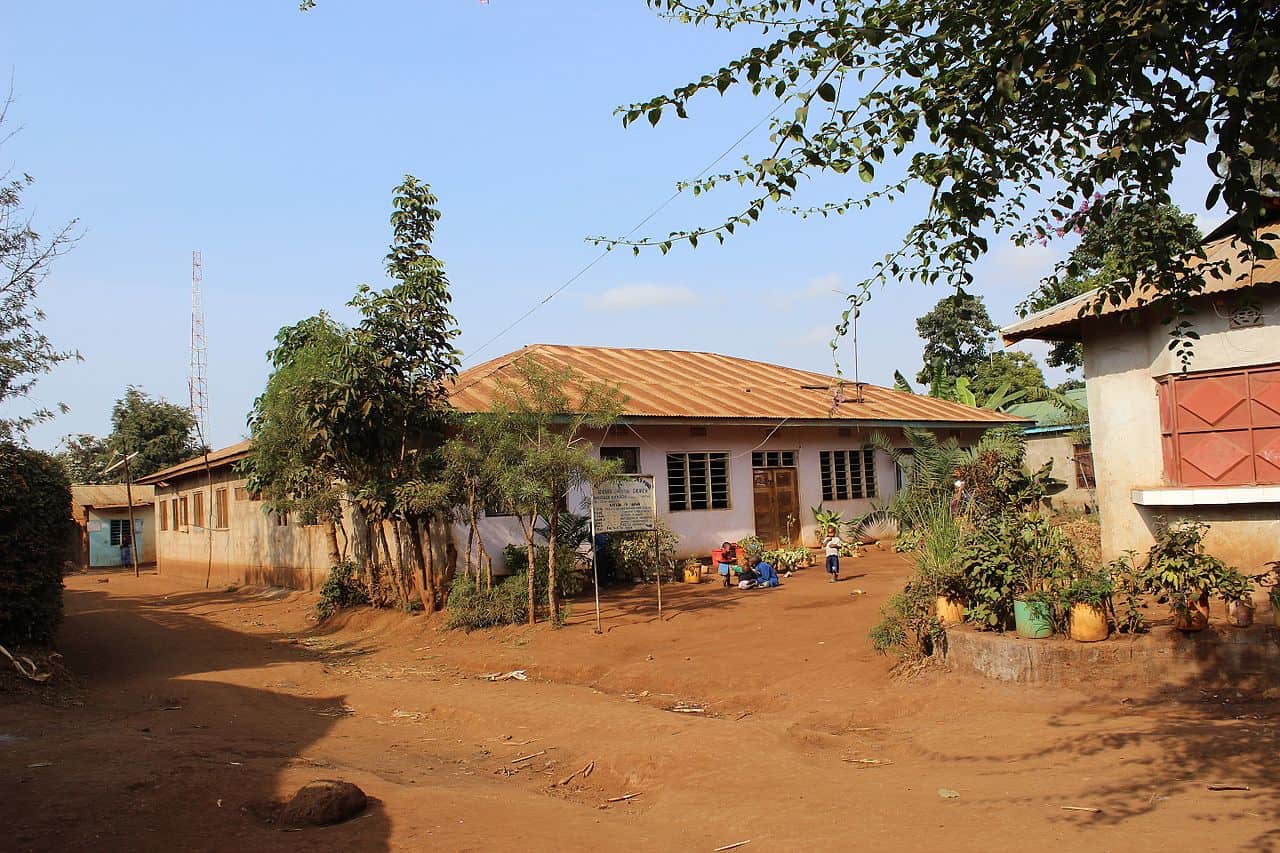 I grabbed a motorcycle taxi, and told him where I wanted to go. We zoomed through the streets of Moshi, and I thought about how beautiful  a city it was. I watched the tourists walking the sidewalks or enjoying a fresh cup of locally grown coffee. I promised myself that one day I would be back and catch a view of the mountain from the perspective of one of those hot air balloons. I arrived at my destination, and slowly got off the motorcycle. My legs were toast. But I put one foot in front of the other, and mumbled that one word I knew — twiga, twiga, twiga.