Top 10 Things to Do in Indonesia

After six months spent living in South Korea, I was itching for an opportunity to cross international borders once again and see what Korea’s neighbors had to offer. Little did I know that my next travel opportunity would find me, not the other way around.

One late December evening, I came home from a long day of teaching to a message from a longtime friend inviting me to her wedding in the heart of Jakarta. As an Indonesian exchange student, she had lived with my family for a short time in our small Midwestern town. Now we’d be reuniting six years later, halfway across the world, for the most important day of her life.

I had no idea Indonesia would be such a life-changing experience for me.

The country is rich in culture, centuries deep in history, full of rich terrain, and populated with some of the most loving people. Whether you’re able to afford a week or two, or just a couple of days, a journey will have the whole family enchanted. The best time to visit Indonesia is now.

#1 Take a Bajaj Around the City

When many people think of Indonesia, their minds automatically wander off to the white sandy beaches and water adventures so famously a part of Bali, Indonesia island life. In fact, the nation of Indonesia is made up of over 17,500 individual islands—a number that can seem hard to believe. Each of these islands, while set in a tropical climate, is home to unique cultural and historical nuances, and some of the richest landscapes found round the world.

Although many travelers may pass right through the city of Jakarta with a simple layover at the airport, the truth is that the city is booming with energy, the 11th largest metropolis in the world. 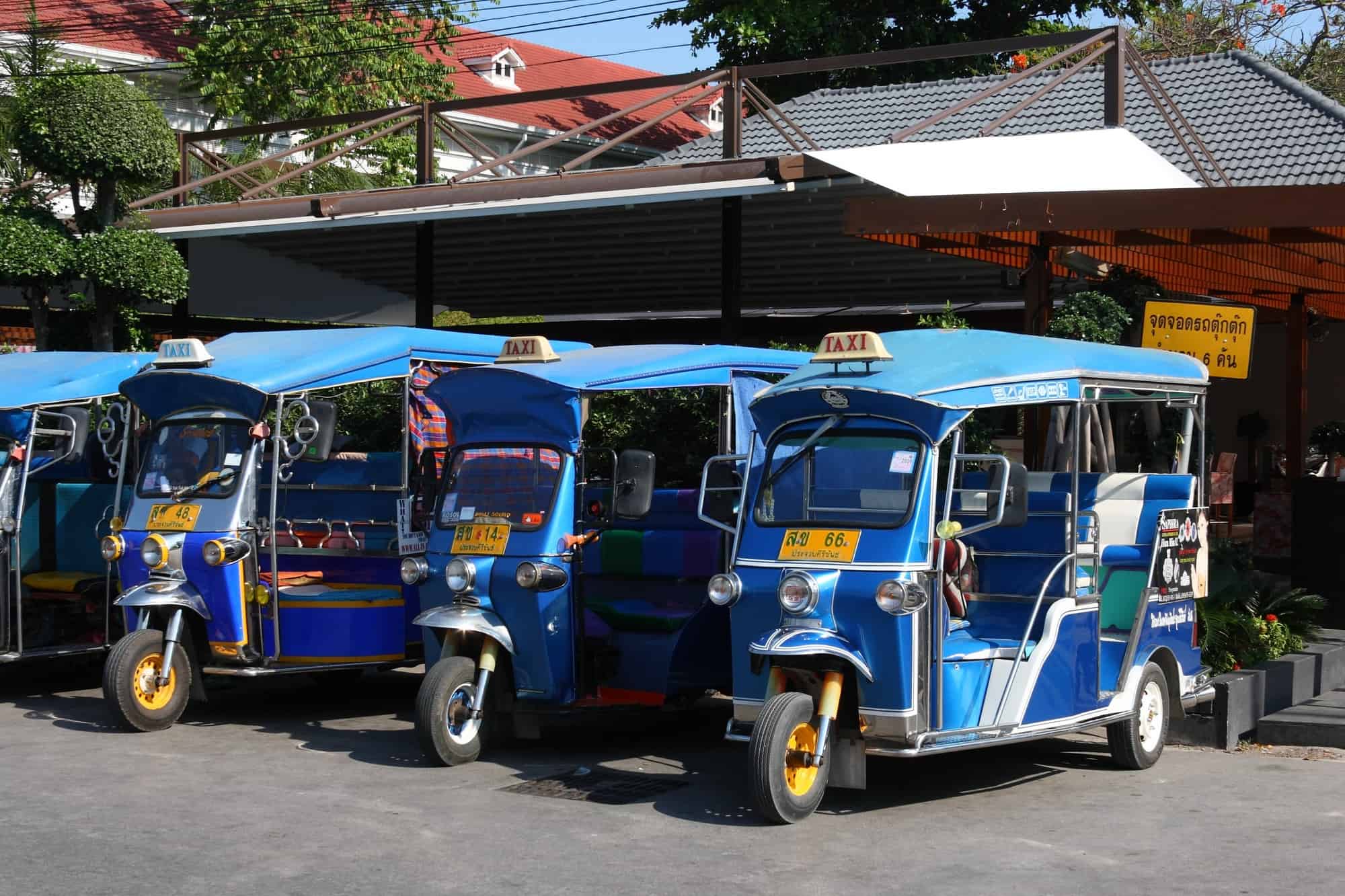 When I first arrived in Jakarta, I was immediately struck by the sheer size of the city, the huge skyscrapers, commercial fronts, and the frenzied traffic. After seeing the time-saving benefits of whizzing around on a motorbike, you might be tempted to give it a try. But driving a motorbike in Indonesia’s capital city of Jakarta with a population of 10 million people is not for the faint of heart.

A convenient, cheap, and entertaining method for the whole family to enjoy is in a Bajaj or the Indonesian equivalent of a Thai tuk-tuk or Indian rickshaw service. This three-wheeled motorbike with a passenger compartment in back allows travelers to beat the traffic and get a closer look at the winding side streets that make up downtown Jakarta. Bajajs can be hailed from nearly every street corner. They’re incredibly inexpensive—less than a dollar to many places around the city.

#2 Dig into Some Local Cuisine

When you’ve built up an appetite, you’ll have your options laid out for you. Cuisine in Indonesia is varied and fresh because of its tropical climate.

Most dishes will include varieties of rice, steamed vegetables, chicken, and a side soup or salad. The national dish, nasi goreng, includes rice cooked in a thick sauce and garnished with pickled cucumber and carrots. Indonesian satay (juicy meat skewers), fried rice, sop buntut (oxtail soup), and siomay (fish dumplings with steamed potato, cabbage, egg, and peanut sauce) are all must-haves.

Restaurants such as Sana Sini Restaurant and Salt Grill by Luke Mangan, both in the center of the city and just minutes from the beach, stay true to this rich cuisine and fill you up with some of the region’s most diverse flavors.

#3 Snorkel Off the Coast of Bali

Once you’re ready for a break from city life, it’s time to see what life is like on some of the smaller islands. While Bali has gained a reputation as one of the top places to visit in Indonesia, full of beauty and mystic, it’s also brought along lots of loud partying and hordes of tourists.

If you’re looking for something more tranquil for the family to enjoy, there’s lots of surrounding islands to choose from, each with its own natural beauty and plenty to keep you entertained. 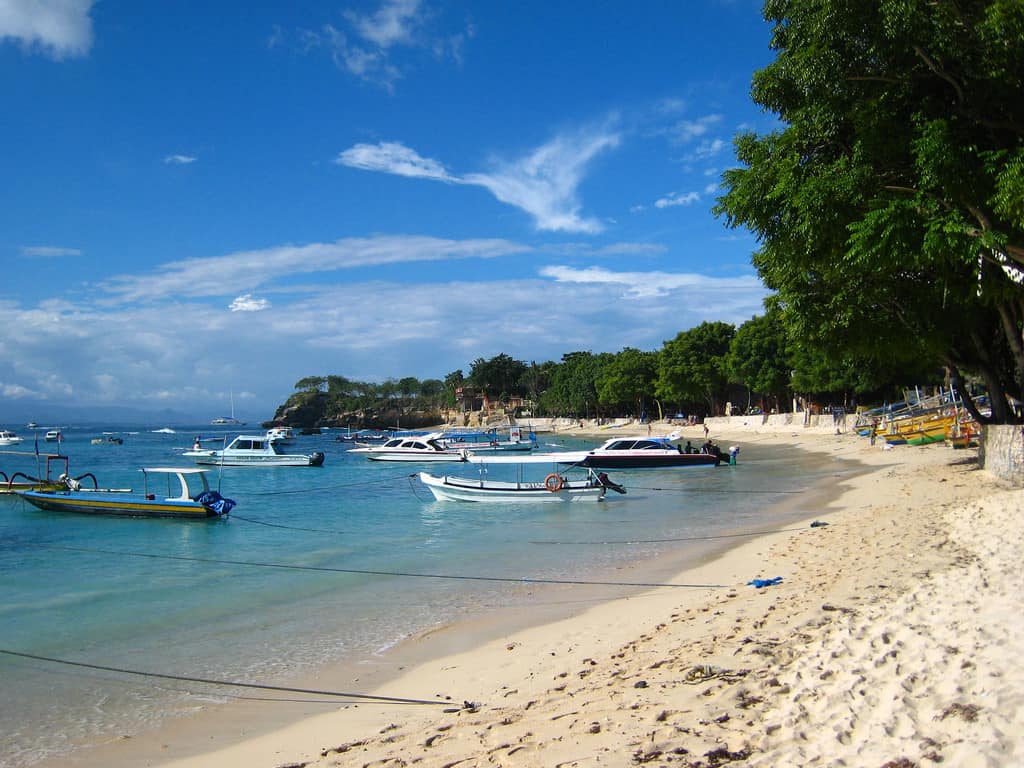 One such island is Nusa Lembongan, about a 30-minute boat ride away from the main island of Bali. There’s a long list of private boat tour companies that will take you to the island, including Scoot Cruise, Tamarind Jaya Express, Island Explorer Cruises, Bounty Cruises, and Lembongan Island Fast Boat. One-way tickets usually cost between $10-20.

As you scoot along, it’s hard not to ooh and aah at the crystal clear water. Of course, what better an opportunity to dive in and see what’s swimming down below? The island itself offers unique snorkeling packages. Manta Point, Mangrove Beach, and Gamat Bay are some of the best snorkeling spots on the island with clear waters and the largest numbers of stingray, seaweeds, and fish species.

A big part of what makes Indonesia such a distinct nation is its rich religious history. While the country today is majority Muslim, historically, the nation has also experienced waves of Hinduism and Buddhism. That’s why, on most of the major islands, you’ll see intricate reminiscence of these ancient temples. These temples fall within Balinese, Javanese, and Indian major ethnic groups. Some of the oldest temples date back to the 5th century, up until the 14th and 15th centuries.

Though Indonesia is home to thousands of Hindu and Buddhist temples, there’s some that just can’t be missed. 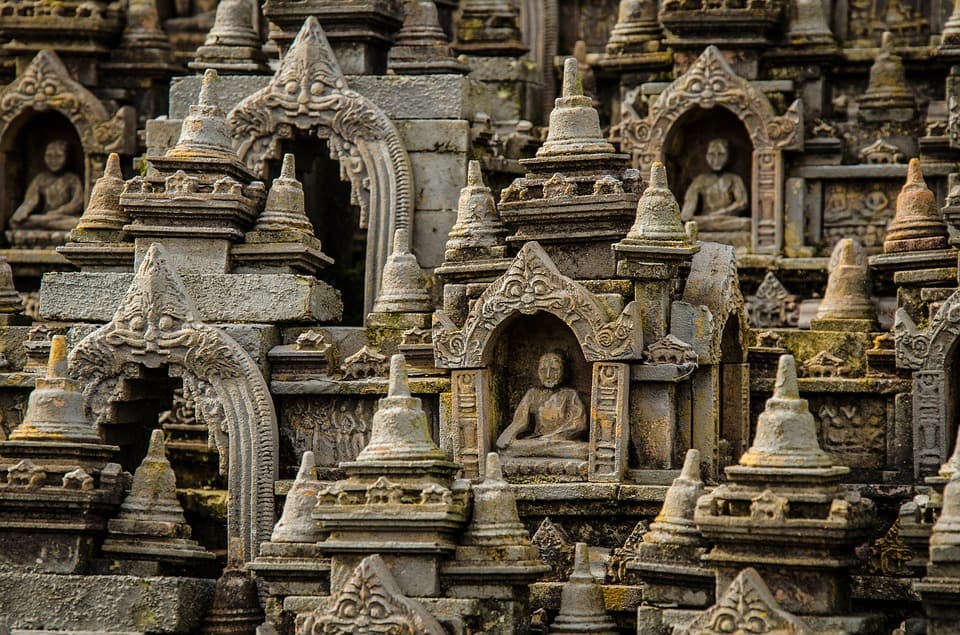 Admission prices vary, but hover around $10 for entry. Many temples also offer packages of admission to multiple temples with a shuttle bus service between them.

#5 Get Lost in the Jungle

A trip to Indonesia would not be complete without a trip to the jungle. Though you’ll get plenty of that adventure adrenaline running when you step out into the wilderness, it’s best to save a more-than-anticipated adventure and go with a tour guide or group. 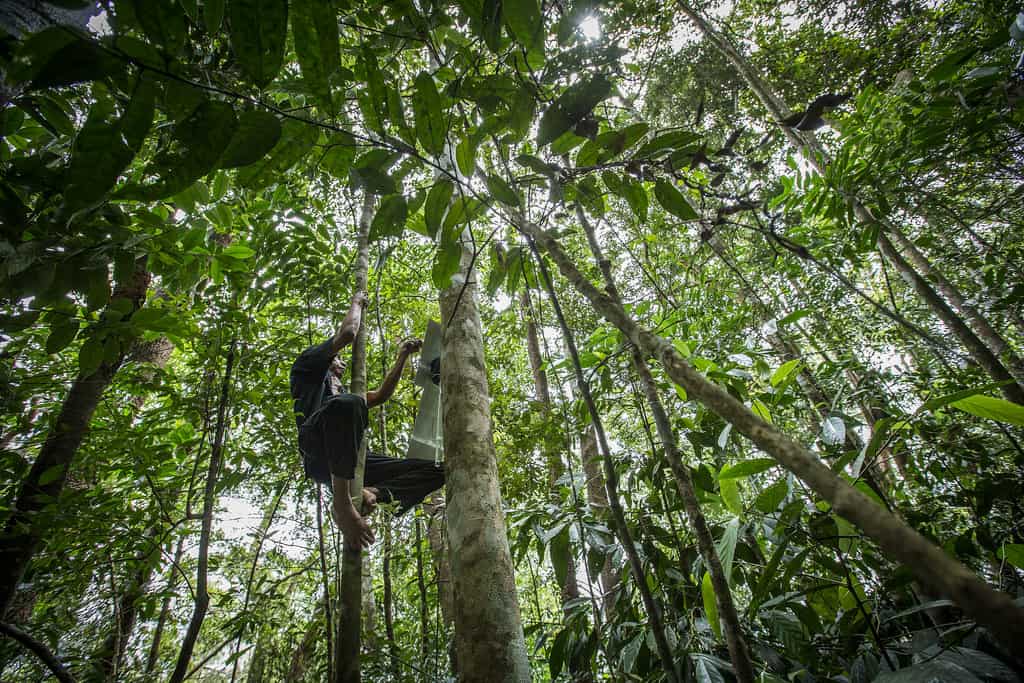 One such company that offers tours into the Indonesian jungle is with Sumatra Jungle Adventure. Located just northwest of Jakarta, the island of Sumatra is rich in animal and plant life, and is frequented by tourists hoping to get an inside peek at life in the jungle. Tour companies such as  Sumatra Jungle Adventure advocate for the protection of flora and fauna, while also promoting sustainable tourism (hiring local guides, etc.). Jungle “trekks” range from 1 to 9 days where groups venture off into deep vegetation and catch glimpses of some of Indonesia’s most varied animal species including monkeys and rare flora such as the rafflesia flower. Day trips can cost around $60. Most trekks also include airport pick up.

Calling all animal lovers to head north of Jakarta City, to the island of Borneo. Holidays in Indonesia offer opportunities to see dozens of species native to the region. Kalimantan, Borneo is home to the TanjungPuting National Park, which boasts the largest orangutan population in the world. The sanctuary also houses primates, birds, and reptiles. 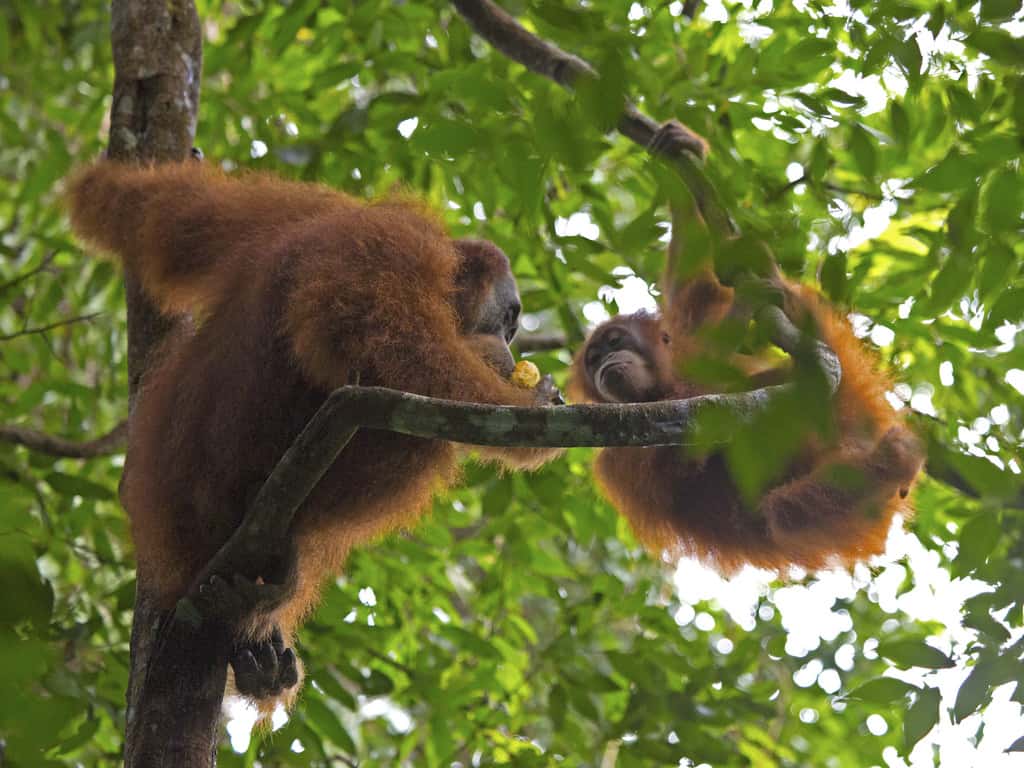 The park stretches over 416 hectares of forest and swamplands. Since 1997, NGO Friends of National Parks Foundation has been striving to restore portions of the park where natural habitat has been lost and animals in that area are now in danger.

Klotok boats are the only way to access the park, but allow travelers to see gators, monkeys, and bird species from a new perspective. Many of the houseboats even allow for overnight, 2-3 day stays. Usually, Klotok boat tours include all meals onboard, boat and fuel, captain, camera fee, tour guide, and entrance fee. In total, visitors can partake in this wild adventure for around $150.

#7 Climb to a Whole New Perspective

This island nation isn’t all about jungle life, though. In fact, the islands sit on top of the Ring of Fire, making it a hotbed of volcanic activity. Things to do in Indonesia without a doubt include climbing some of its most impressive peaks, many of which have recently erupted. 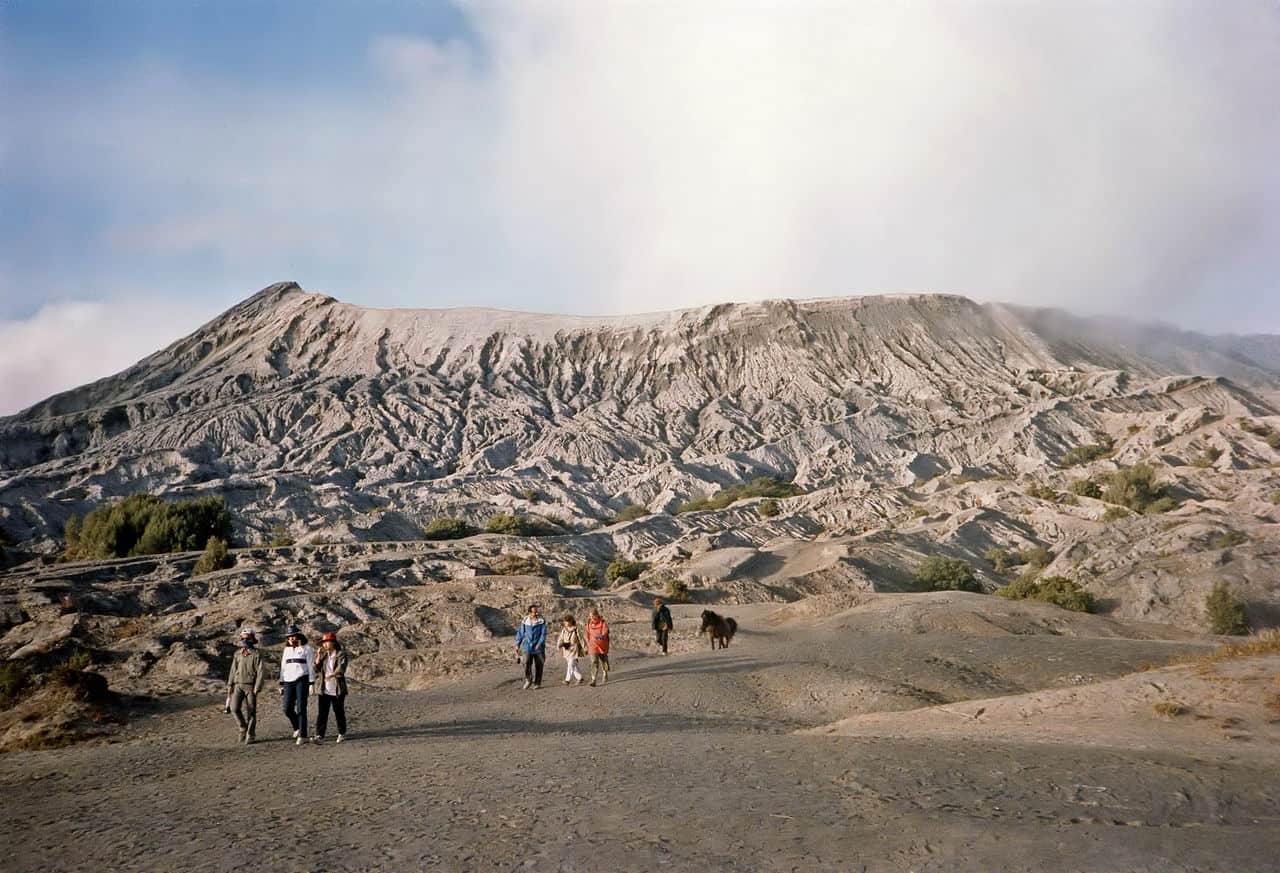 Visitors to the park can check out such scenic landscapes as the Madakaripura Waterfall and The Tengger Sand Sea. The park is also home to 137 species of birds, 22 species of mammals, and four species of reptiles.

#8 Check Out the Local Markets

Not all aspects of your trip to Indonesia have to be planned out head to toe. In fact, you’re more than likely to stumble upon a local fruit market busy with locals buying goodies or weekly necessities.

In the shopping district of Yogyakarta, visitors will join locals in checking out the clothing and food selection for the day. The market may be packed, but this way you’re sure to get the full effect of city life in one of the city’s biggest markets. 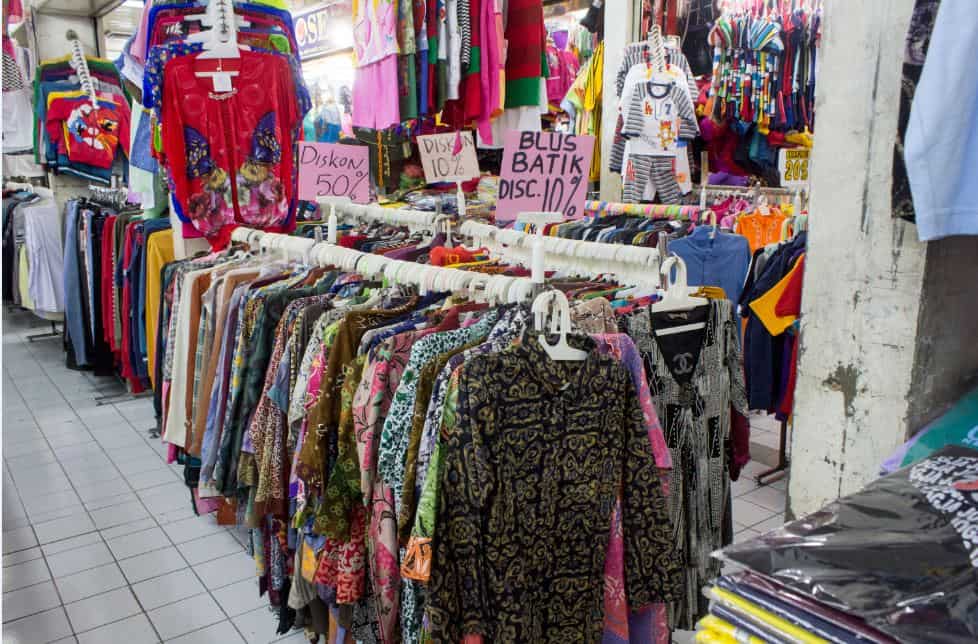 When I visited Jakarta for my friend’s wedding, we made sure to visit the early Sunday morning market just beyond her university, the first Islamic university in the country. I got a whole new appreciation for early morning markets, which began around 6 or 7 in the morning; before the temperature really starts to heat up. Early in the morning though, there’s a serenity as local people go about their daily shopping.

Tana Toraja in South Sulawesi Province is an opportunity for international travelers to learn more about traditional cultures. This particular tribe is famous for its burial rituals in full music, dance, and costume, as a way to honor dead and celebrate life. 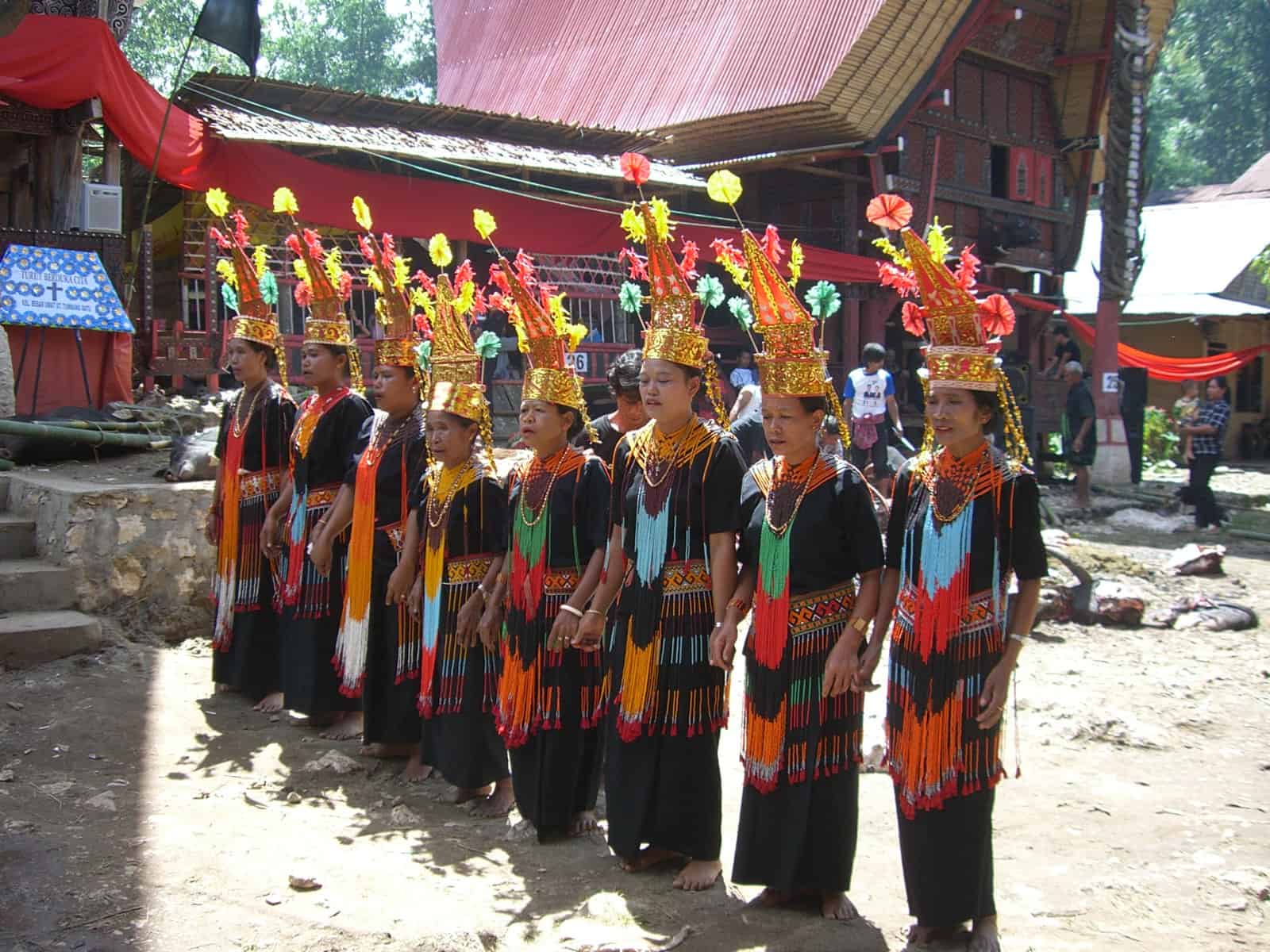 A flight from Hasanuddin Airport in Makassar, at around $55-60 gives visitors the chance to check out different styles of traditional homes, customary burial sites, and galleries of ancestor statues.

Visitors can rent a motorbike to get around the island, although for trips to more secluded parts, visitors should hire a guide to accompany them.

#10 Wander Around the Rice Fields

See all those classic pictures of Bali come to life when you visit its electric green rice fields, freshly moistened from the day’s rain. The terraced farming style so famous in Indonesia, built into the sides of mountains, has been considered a UNESCO Cultural Landscape and a must for Indonesia travel.

The Jatiluwih Rice Fields of Bali, for example, includes of 600 hectares (1,483.6 acres) of rice along with the Batukaru mountain range. Terraced farming known as “subak »allows for water conservation, dating back to the 9th century. Vantage points are breathtaking, including views of mountains, jungles, and small farm houses off in the distance.

The entrance fee is 15,000 IDR, or just over $1.00. Nearby accommodations and restaurants complete with local and international food also makes for a pleasant overnight stay.