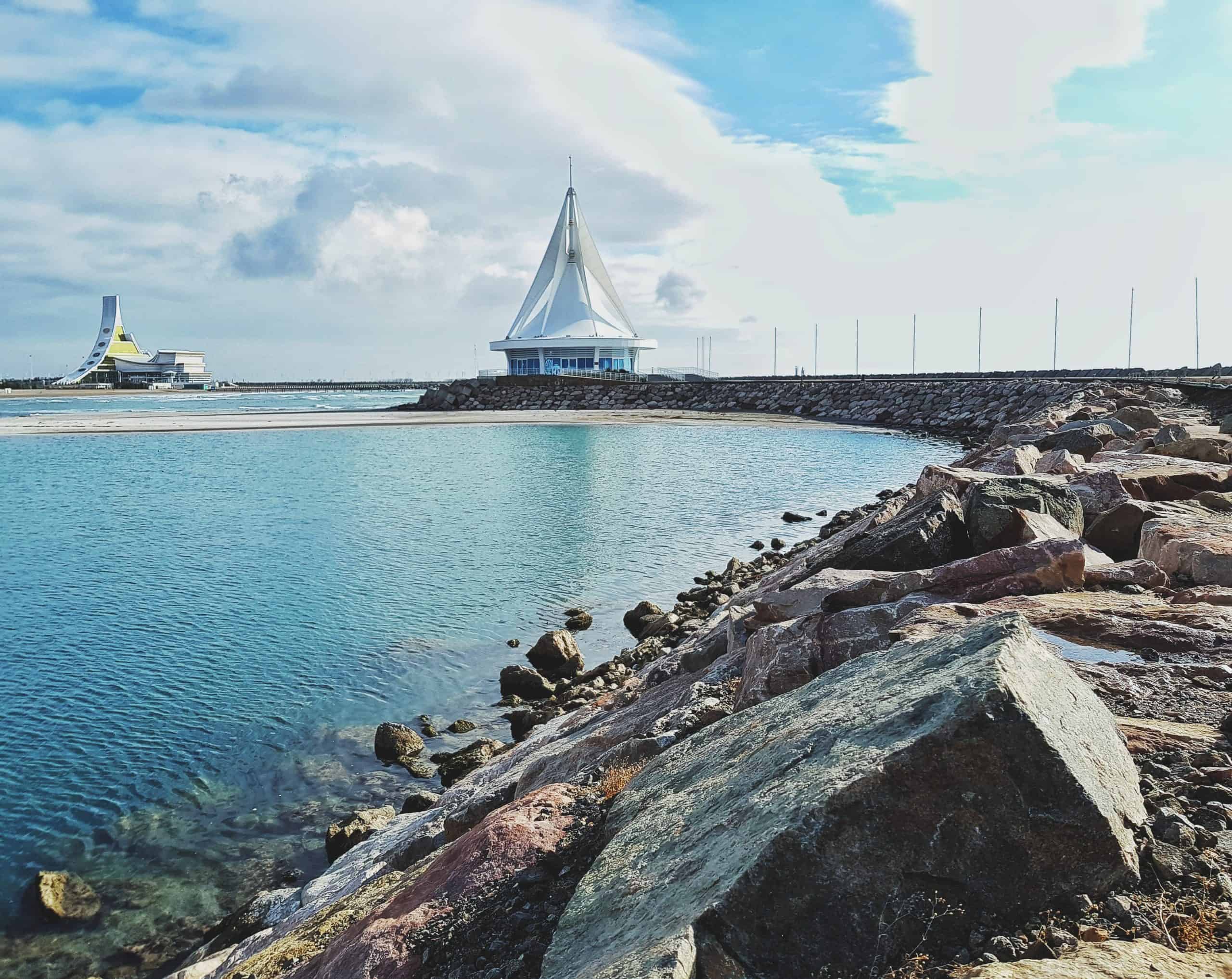 Mostly known for its large gas reserves and autocratic government, Turkmenistan, also known as Turkmenia, is not a place you can easily find on the top 10 must-visit countries list, but this sovereign country in Central Asia holds treasures worthy of a serious traveler’s visit.

Turkmenistan is bordered by Kazakhstan, Uzbekistan, Afghanistan, and Iran with Ashgabat as its capital and largest city, followed by Turkmenabad and Dasoguz. Russian is widely spoken in Turkmenistan, although its official language is Turkmen, which is spoken by 72 percent of the population. Uzbek, Kazakh, Tatar, and Ukrainian are among the other languages also spoken in Turkmenistan. The flag of Turkmenistan is easy to spot; it’s a green field with a vertical red stripe with carpet guls and a crescent moon with five stars. The Turkmenistan flag is made up of red, green, yellow, and white colors. 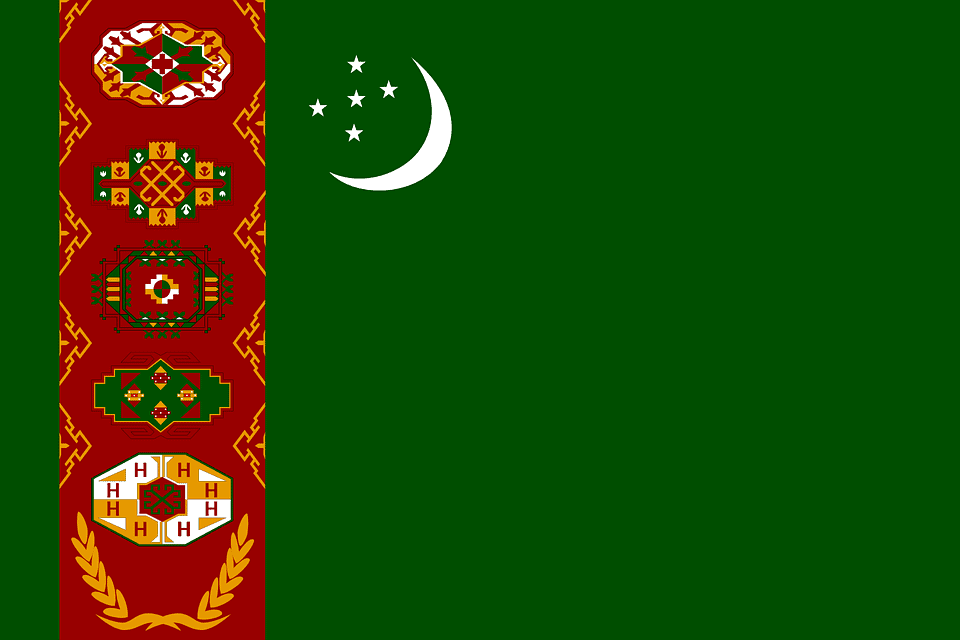 Getting to Turkmenistan as a tourist is not as hassle-free as going to a more touristy country. To increase your chances of being able to set foot in the country, you need to get a guided tour as well as a tourist visa. There are a couple of travel agencies you can reach out to who can help you arrange your tour and can help you get your visa approved. Getting around Turkmenistan is pretty easy once you get the guided tour since they will be providing you with transportation. Generally, Turkmenistan is safe to visit, but you are required to explore with a tourist guide from a government-approved travel agency.

When traveling around Turkmenistan, you need to have manat (TMT), the currency used in Turkmenistan, with you most times. One USD is 3.51 TMT. Foreigners can pay in USD in hotels and other major establishments, but small shops and local cafes require you to pay in Turkmenistan currency.

The best time to visit Turkmenistan is between March to June and September to November. The country has extreme winters and summers. You wouldn’t be able to do as much exploring during these seasons. Turkmenistan’s time zone is UTC+05.

The majority of the Turkmenistan population is made up of ethnic Turkmens, more than four-fifths of the country’s population. There are also smaller numbers of Russians, Tatars, Uzbeks, and Kazakhs in Turkmenistan.

15 Best things to do in Turkmenistan

Commonly known as the Gates of Hell, the Darvada Gas Craters are a must visit in Turkmenistan. This is one of the most unusual sights you will ever lay your eyes on. The Gates of Hell, also known as Door to Hell, are said to have been burning since 1971 as a result of Soviet-era gas exploration.

Located amidst the desert, it takes about three hours to reach The Gates of Hell from Ashgabat. The crater has a diameter of 230 feet and a depth of 98 feet. Since it started burning, only one man, George Kourounis, has been to the bottom of the crater. If you are quite an adventurer, getting a glimpse of this crater should be on your list of things to do in Turkmenistan.

Getting to Turkmenistan could be quite challenging, so once you are there, one of the best things to do to get the most out of your trip is to visit the National Museum in Ashgabat. This museum is a collection of three museums – the History Museum, the Nature and Ethnographic Museum, and the Presidential Museum. You will find displays of Neolithic tools from western Turkmenistan and relics from the Bronze Age Mariana Civilization in the History Museum.

The Bakharden Cave, which houses the Kow Ata Underground Lake, is also known for the largest known colony of bats in all of Central Asia. Even if you are not planning to go swimming and just want to check out the place, it is best to bring a change of clothes since the sulfur smell is quite overpowering.

Visit the Disneyland of Turkmenistan! Turkmenbashi’s Land of Fairy Tales is one of the best things to do in Turkmenistan. This massive amusement park is located in the country’s capital, Ashgabat. The park has 54 attractions which span across 100 acres of land. You can find amusement park staples here, such as the Ferris wheel and roller coaster. You can also find a T-rex frozen in a cave and other animal-themed rides in Turkmenbashi’s Land of Fairy Tales.

One of the best things to do in Turkmenistan is to explore the Yangkala Canyon in the western part of the country. This is a hidden gem of pink, red, and yellow rocks and canyon walls. It is quite a challenge getting to Yangkala Canyon; even some local Turkmens have not seen it, which makes taking a trip here even more worthwhile.

You can camp out on the plateau above the canyon but brace yourself for the strong winds. Most of the tour companies do not include visiting Yangkala Canyon as part of their standard itineraries because of the distance, but you can definitely arrange a trip here.

Visiting a cemetery during your trip to another country may not be top on your list, but checking out Nokhur Cemetery is one of the top things to do in Turkmenistan. What makes this cemetery unique is that almost every gravestone is adorned with the horns of a mountain goat. The locals believe that the goat horns fight off evil spirits and help the souls of the dead go to Heaven. In the region, mountain goats are also sacred and celebrated for their strength and endurance. You may not be allowed to get close to the tombs, but you can admire the cemetery from the outside.

Visiting the archeological site Gonur Depe is one of the best things to do in Turkmenistan. Gonur was considered one of the great civilizations of the ancient world. It is a fascinating place filled with history. If you are an archeology enthusiast, you should not miss visiting this place when you are in Turkmenistan.

The whole place takes about two hours to explore. Getting here via 4WD is required since the final road towards Gonur Depe is a rough track in dirt.

Visiting the unusual Kyrk Gyz Cave is one of the best things to do in Turkmenistan. This bizarre cave is covered with large number of stalactites made of cloth. The cloth stalactites came to life because local legend has it that anyone who can fling a mud pie with a cloth attached to it to the ceiling of the cave and make it stick will walk away with their wish granted.

When searching for what to do in Turkmenistan, visiting the Wedding Palace will surely come out in your search results. You need not be getting married to visit and appreciate this grand piece of architecture. When you are in Ashgabat, it is hard to miss this government building because of its massive geometrically caged disco ball on the very top of the building.

This civil building is called the Wedding Palace because a lot of couples get married here. If you appreciate eccentric architecture, this place should be on your list of places to visit in Turkmenistan.

Another place to visit in Turkmenistan is the Arch of Neutrality. This arch was built to celebrate the Turkmens endorsement of Turkmenbashi’s policy of neutrality in 1998. The most eye-catching part of the arch is the 12m-high, polished-gold statue of Niyazov, which revolved to follow the sun all day. You can take an elevator to the top of the monument where you can also explore a small museum. Visiting the Arch of Neutrality will be a good culture trip for you during your visit to Turkmenistan.

This concrete stairway, which runs alongside Kopet Dag Mountains, was built to improve the health condition of the people in Turkmenistan, thus the name. The Walk of Health is made up of two paths – 8 kilometers and 37 kilometers. If you want to stay active while you are in Ashgabat, taking a walk here would be ideal for you.

The Ruhnama is a book written by the former president of Turkmenistan, Saparmurat Niyazov.

The Giant Ruhnama is a huge monument of that book located in Ashgabat. People enjoy visiting this gargantuan monument for its quirkiness.

The Independence Monument of Turkmenistan in Ashgabat was built as a memorial piece to a controversial independence. This architectural gem covers an area of more than 80 thousand square meters. The whole place looks extravagant and grand, thus spending time here is one of the best things to do in Turkmenistan. You will see a lot of locals spending time here, especially when the sun is setting.

One of the best places to visit during your trip to Turkmenistan is the Dekhistan Ruins. The ruins are made up of the remains of a medieval city in one of the most isolated regions of the country. This is a popular site for tours, so your tour company most likely has this on their standard itinerary. You can easily spend a couple of hours exploring the ruins, especially on days when the weather is moderate. Do not forget to bring your camera and take snaps of what used to be a flourishing village.

Everyone in Turkmenistan remembers the bloody battle against Russia in 1881. The Saparmurat Hajji Mosque was built as a memorial to the thousands of Turkmen civilians and soldiers who died during the battle. The mosque became a national symbol of Turkmenistan’s struggle and perseverance.

The Saparmurat Hajji Mosque is open but is seldom used as a place of worship. Foreigners who would like to visit and explore can do so with a minimal admission fee. Make sure to dress appropriately if you are planning to go inside the mosque.