The Philippines is known for many things–its pristine beaches, delicious food, abundant seafood, and historic churches. It is home to world heritage sites, as well as numerous malls and people who love to sing (and are very good at it) and have fun. This country truly is fiesta central, with people coming up with any and all excuse to have a celebration. These celebrations almost always involve lots of delicious food, over the top decorations, and merriment for days on end. Streets get closed down and decked out in colorful banderitas, work gets suspended (local municipalities usually declare festival dates as non-work days), and everyone helps out in ensuring that the festivities are as exciting as possible. Tourists flock to these festivals, as they are often perfect opportunities to learn more about the people’s customs and culture, and to take lots of photos and sample the local delicacies.

Festivals happen year-round in the Philippines, and, rain or shine, they are celebrated to the fullest. Here are 10 of the top festivals you should never miss:

Thousands of tourists flock to the historic town of Lucban in Quezon, also touted as one of the cleanest and most peaceful communities in the country. Held every May 15, the San Isidro Pahiyas Festival features the colorful decorations of every home, showcasing farmers’ bountiful produce as a sign of thanksgiving. Other homes engaged in other forms of livelihood display their products as well. For instance, handicraft manufacturers deck out their homes in colorful buri hats, bags, and placemats, while butchers might decorate their homes with succulent lechon or grilled meat. The Pahiyas honors the patron saint of farmers, San Isidro Labrador.

The Pahiyas has drawn so many tourists to Lucban over the years, the Department of Tourism recognized the area as a tourist town and a cultural heritage site.

Celebrated during the first week of May, the Viva Vigan Festival of the Arts is one of the biggest festivals in the north. It started in 1993 to promote the value of the historic town. Before the city became the premiere tourist destination in the north, the focal point of the festival was to raise awareness for the ancestral houses, so that they can be preserved and protected. Through the years and with the help of national and local agencies, the festival has succeeded in promoting other aspects of Vigan–its cuisine and religious festivals, to name a few. 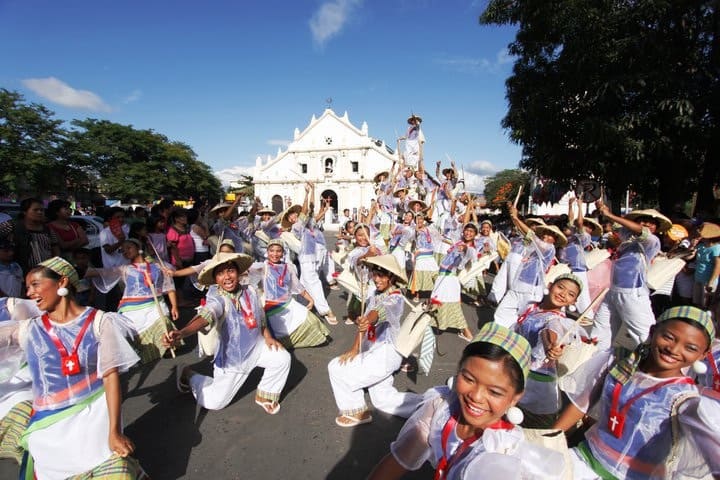 Viva Vigan counts the Binatbatan Festival as one of its main events, which features a street dancing competition. Another is the Karbo Festival, which involves a parade of water buffaloes dressed up in costumes. Concerts, comedia or stage dramas, parades, abel fashion show, and beauty pageants also occur during the six-day festival. You can also take part in religious rituals or visit exhibits, garden shows, and trade and food fairs.

Held annually at the City of Smiles every third week of October, the Masskara Festival showcases the use of colorful masks of smiling faces, making this one of the happiest festivals in the country. It is ironic, therefore, that it originated during a period of crisis in 1980: the price of sugar, the province’s primary agricultural product, was at an all-time low, and the sinking of the MV Don Juan killed many Negrenses, including those belonging to prominent families in Bacolod. The city’s artists, local government, and civic groups decided to hold a Festival of Smiles in an effort to alleviate the despair felt all over the province. The mask motif of the festival was heavily influenced by the Carnival of Venice and the Rio Festival. 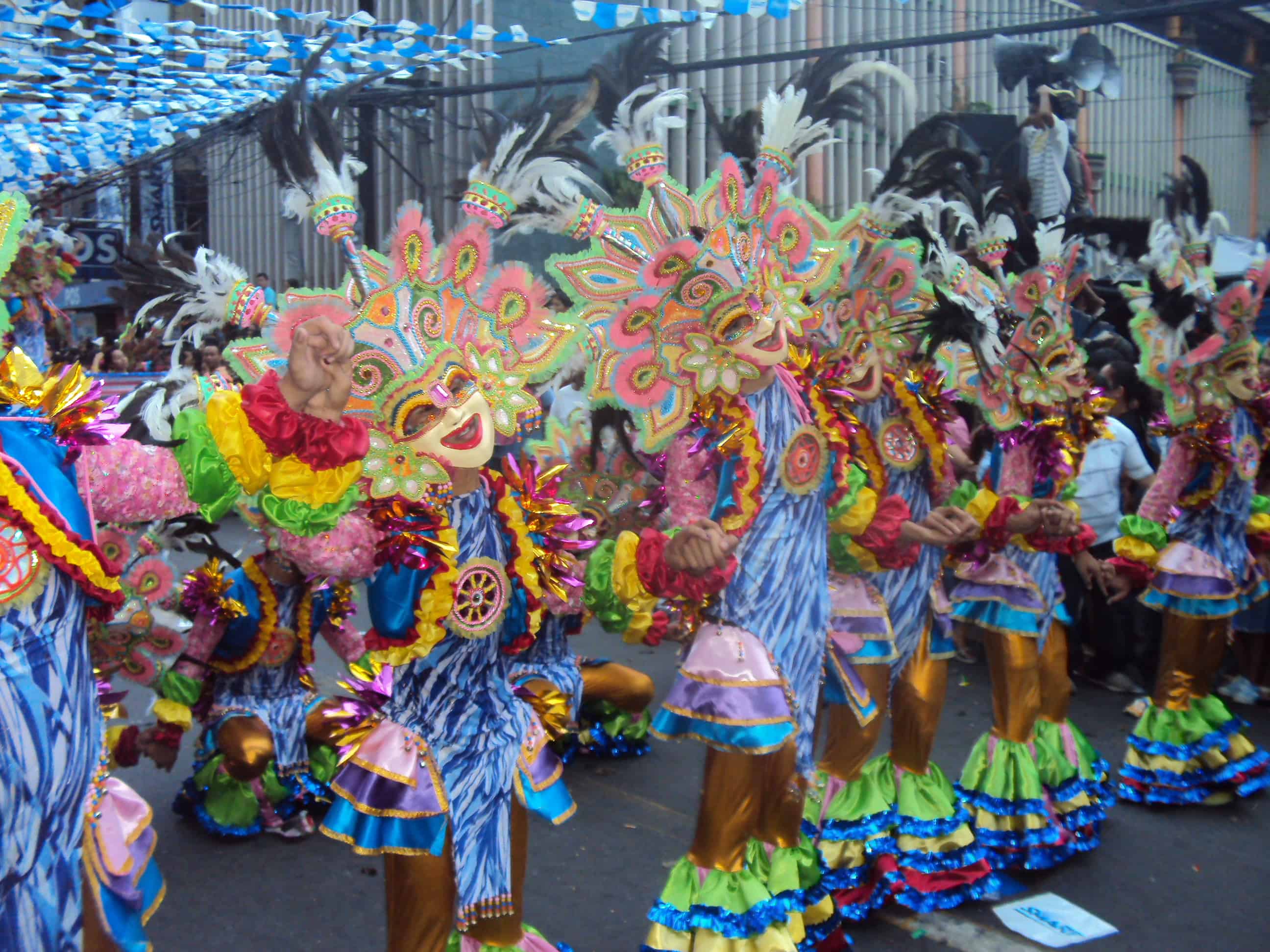 Lechon, the centerpiece of the tables of countless Filipino homes during major celebrations, takes center stage in a truly unique way every year in the Parada ng Lechon in Balayan, Batangas. Celebrated every June 24, people flock to the oldest town in Batangas to witness the parade, which features perfectly roasted lechons dressed in costumes, and take part in the huge street party with bands playing in every major corner. Prepare to get wet, as townspeople line up along the streets and on their rooftops armed with water hoses, toy guns, and buckets to douse everyone in ice water, centuries-old practice in places where St. John the Baptist is the patron saint. 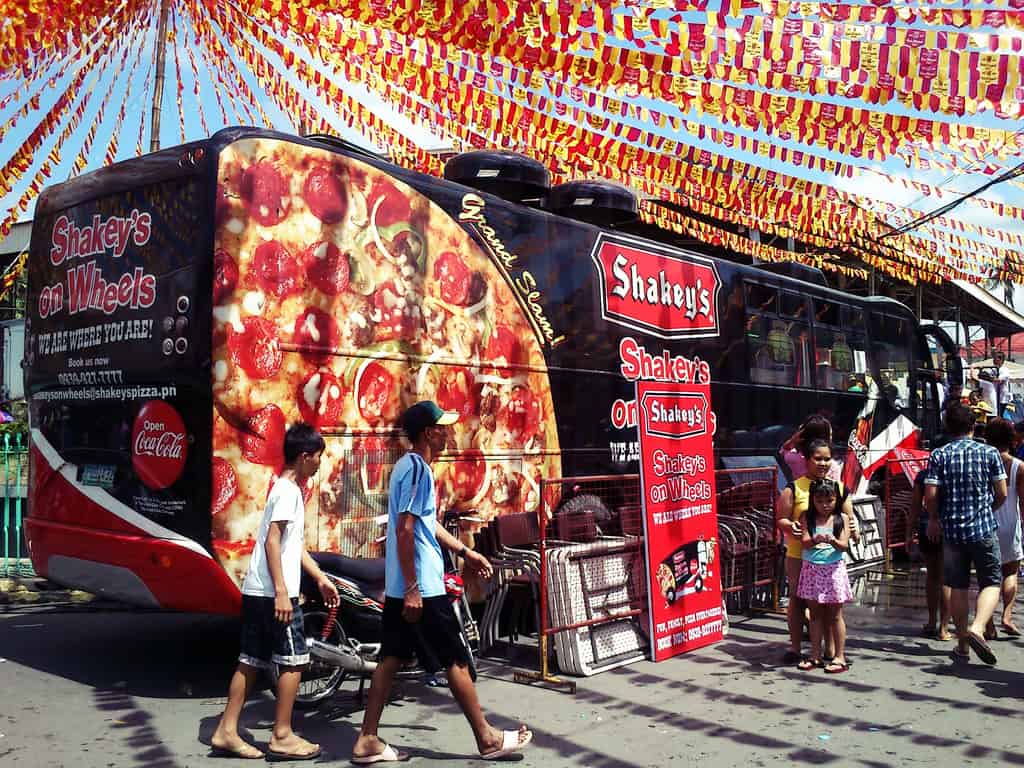 Of course, you can look forward to enjoying sumptuous lechon too, so get ready to throw your diet out the window, at least for a day.

One of the grandest, most distinguished, and most colorful festivals in the Philippines, the Sinulog Festival is held annually every third Sunday of January in Cebu City. This festival honors Santo Niño, or the Child Jesus. This beautiful event is essentially a dance ritual that is a tribute to the Filipino people’s pagan past and recognition of Christianity. It also features a colorful Grand Parade. 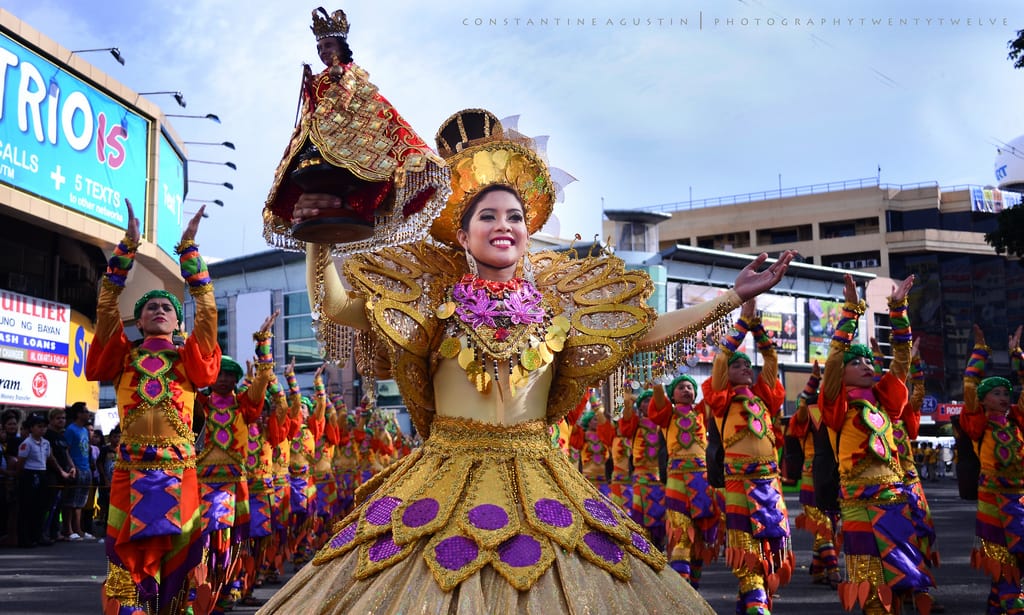 This cultural event has been commercialized in recent years as a tourist attraction, which means that apart from the traditional local street dancing, there is also a competition participated in by groups from various parts of the country. The nine-day festival also includes a Fluvial Procession or a water parade, held at dawn from the Mandaue City wharf to the Cebu City wharf, where the Sto. Niño is carried on a pump boat decorated with hundreds of flowers and candles.

The Panagbenga Festival, or Flower Festival is a month-long annual festival held every February. It was originally celebrated as a way to rise up from the devastation brought to the city by the 1990 Luzon earthquake. The festival features floats covered with flowers similar to the ones in Pasadena’s Rose Parade. Dancers clad in flower-inspired costumes strut through the streets, inspired largely by a celebratory Ibaloi dance called the Bendian.

Street dancing competitions, parades, trade shows, and food fairs are just some things to look forward to at Panagbenga. In recent years, celebrities and big brands also participate in the grand parade, lending much-needed star quality to the festivities.

The Iloilo Dinagyang Festival is a showcase of the rich heritage, colorful history, passionate devotion, and fun-loving spirit of the Ilonggo people. The festival traces its roots as a thanksgiving celebration in honor of Senyor Santo Niño, the Child Jesus. Today, it has grown to be one of the Philippines’ most spectacular religious and cultural festivals. 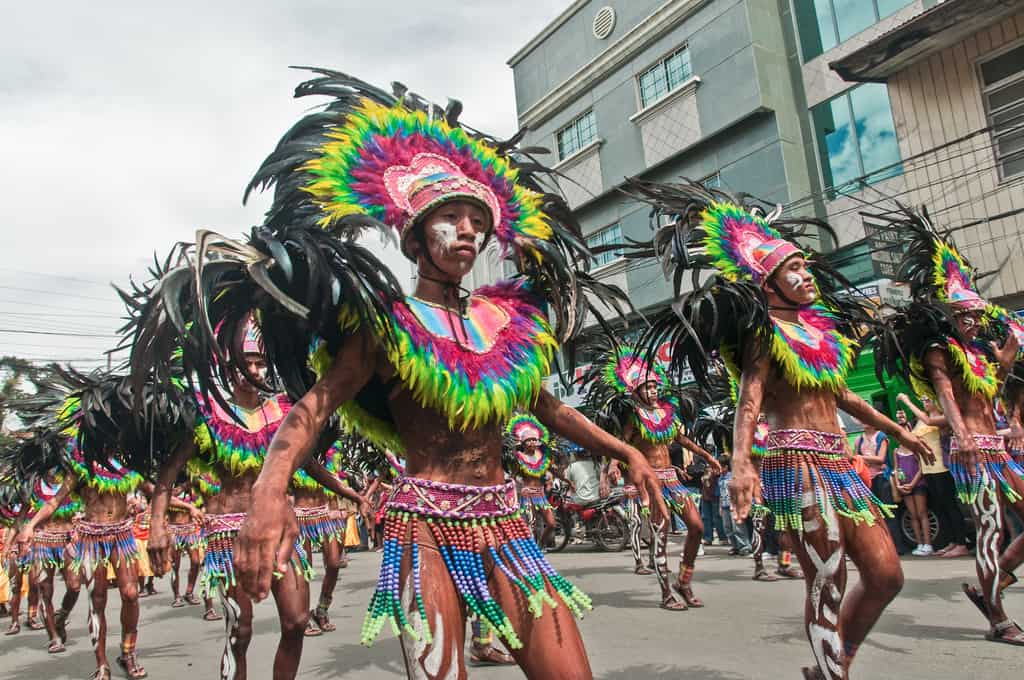 The festival highlights are scheduled on the fourth weekend of January in addition to many exciting activities happening all throughout the month. The religious highlights include the fluvial procession along the Iloilo River, and the Dinagyang Ati cultural parade and competition.

Moriones is technically a religious activity and should be somber, but it has become quite the tourist attraction, so it can rightly be considered a festival. The Moriones Festival is an annual recreation of the life of Saint Longinus; the word “morion” means “mask.” Longinus was the half-blind centurion tasked with driving a spear into the side of Jesus. When Jesus’ blood touched him, Longinus’ vision returned. He then converted to Christianity and turned his back on his fellow centurions. The weeklong festival begins on Palm Sunday and culminates on Easter Sunday. During this week, participants brave the heat in full centurion garb, looking for the fugitive Longinus. The townspeople play along, and allow the man playing Longinus to hide in their houses. 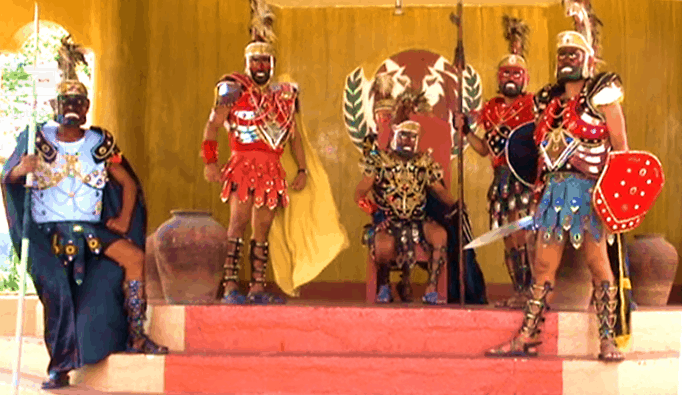 For Marinduqueños, joining the festival is a panata—an expression of devotion, sacrifice and thanksgiving to God. The traditional masks are carved from trunks of wood, in a process that takes up to a month; the P5,000 price tag that comes with it is no laughing matter to residents who make a living fishing and farming.

The Higantes Festival, also known as the Feast of San Clemente, is celebrated every November 23 in the town of Angono, Rizal. This is a major festival in honor of San Clemente, the patron saint of fishermen.

The Higantes Festival is part of a two-week long celebration of the Angono Town Fiesta. Activities include a Misa Cantada (a special sung mass), novena, song and dance contests, fried “itik” festival and cooking competition, a 5k Fun Run, on-the-spot painting contest, art exhibit, job fair, bingo and videoke challenge, and of course, the highlights of the festivities — the Race of the Higantes and the Procession of the Pagoda.

A procession is held throughout the town, with the images brought to the banks of the Laguna de Bay where they would be enshrined in a floating pagoda for a fluvial procession until the event concludes with the image of San Clemente returned to the church.

During the procession, thousands of revelers splash water on unsuspecting participants and onlookers. They use water bottles, squirt guns, and even drinking glasses, spraying water on everyone passing by.

The Pintados-Kasadyaan Festival is a merry-making event lasting a whole month, highlights of which include the Leyte Kasadyaan Festival of Festivals, the 17th Pintados Festival Ritual Dance Presentation and the “Pagrayhak” Grand Parade. These festivals are said to have begun from the feast day of Señor Santo Niño, held every June 29th. 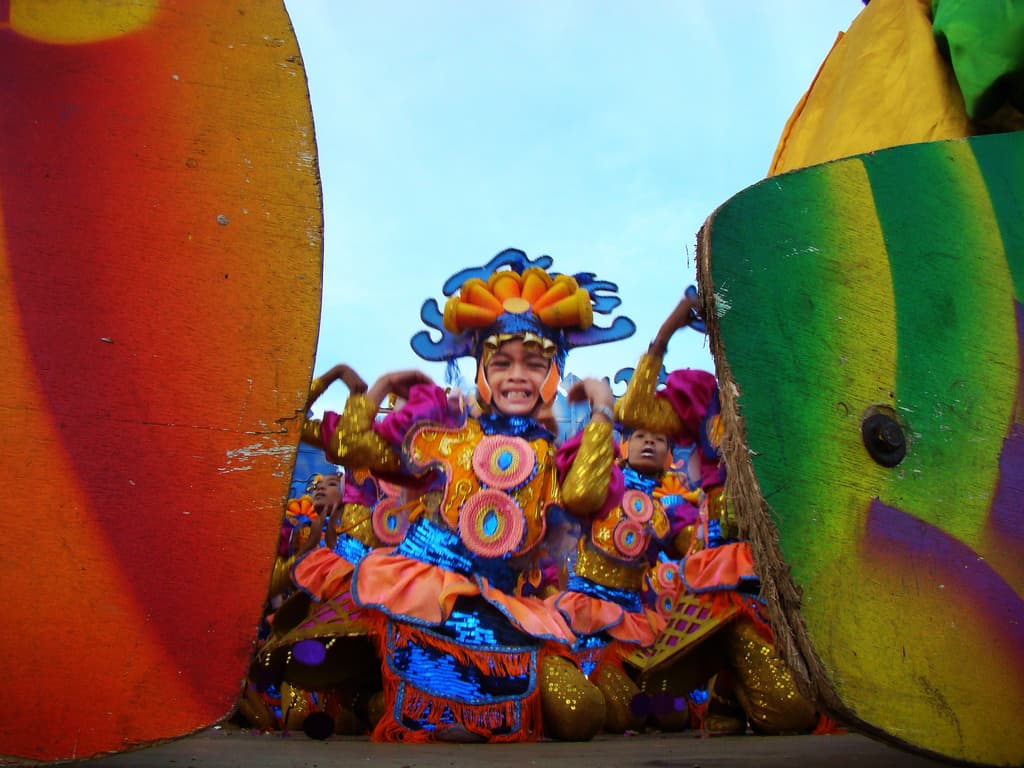 Come to the Philippines and take part of these festivals and make memories you will surely remember for the rest of your life!