Top 10 Things to Do on Your Saudi Arabia Vacation

The Middle East is not exactly a cheap place to go for a vacation, but it is definitely worth saving up. Amongst the countries in the Middle East, Saudi Arabia is one of the frequently visited by tourists. This West Asian country is the world’s second-largest oil producer and the third-largest dates producer.

For a more enjoyable trip, here are the top 10 things to do on your Saudi Arabia vacation:

When having a vacation in Saudi Arabia for the first time, you would probably arrive in Riyadh first which is the country’s capital as well as the biggest amongst all cities in Saudi Arabia. This building is one of the most popular landmarks in the country. It contains a hotel, a shopping mall, apartments, and offices. If you are in the mood for shopping or going on a food trip for some Saudi food, you will not have a hard time finding some here.

While in the country, do not miss the chance of sampling some fatir, kapsa, and tabbouleh. There are so many things to do in the Kingdom Center Tower, but the most famous attraction in this building though is its viewing deck which looks out to the city. It is a great place to take your travel photos or vacation selfies with the city skyline in the background.

Since the time it has allowed tourists to visit the country to diversify the country’s economy and just not depend solely on oil, the Red Sea has become one of the top Saudi Arabia vacation spots. Yes, even though most of the country is a desert, it does have access to the sea. In fact, the Kingdom of Saudi Arabia has incredibly long coastlines on both the Red Sea and the Persian Gulf.

If you are looking forward to some water activities, you will be happy to know that the Red Sea has one of the world’s best diving and snorkeling spots. The famous sites include Allah Reef and Boiler Wreck. The good thing about these spots though is that these are only popular with tourists thus it is not as crowded. Local Saudis are not yet that into scuba diving.

Also known as Rub’al Khali in Arabic, the Empty Quarter is a borderless massive sand dune. For adrenaline pumping desert experience, coming here should be on your list of things to do on your Saudi Arabia vacation. There are travel agencies that offer guided tours here on 4×4 rides. If you prefer something more traditional and old school, you can also explore the place while riding on a camel.

This would be a cool activity to do with kids. It is not advised for you to come alone since the area is massive and with very minimal signs which would be easy for you to get lost in the sand dunes. The Empty Quarter, sometimes also called “Adobe of Silence”, covers almost 655,000 sq km. Its sands and dunes can reach up to a 300 meter high which would be perfect for sand surfing and 4×4 rides. Camping in the sand dunes is also possible and can be arranged by a tour company. The clear desert night sky is perfect for stargazing and astronomy trivia with the kids.

Kids love art and the best art gallery to visit during your vacation in Saudi Arabia is the Jubbah Rock Carvings. This pre-Islamic site and open-air art gallery cover an area of 39 sq. km. Here you can find some of the world’s most impressive petroglyphs or rock carvings. 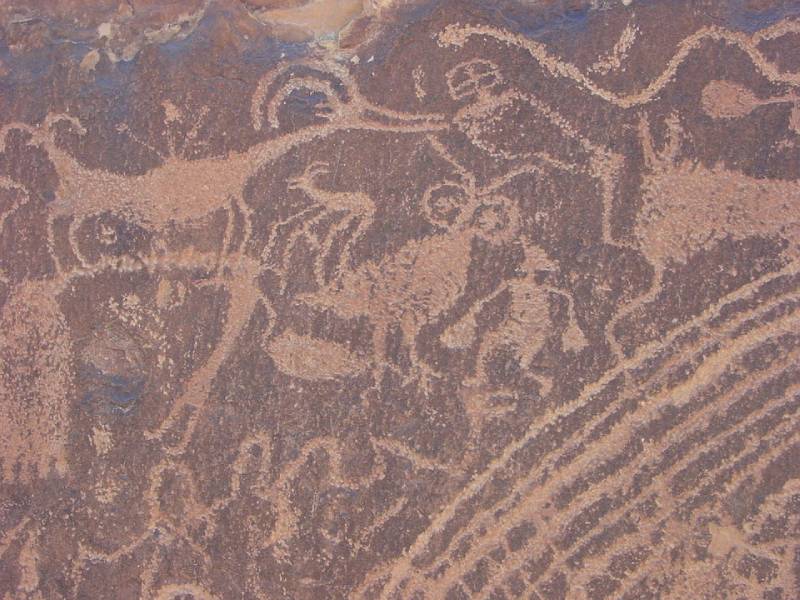 The inhabitants who did the carvings used animals as subjects. These carvings are dated back to around 5500 BC. You can see ibex, oryx, and camels in the rock carvings. The gallery is open on weekdays, but it is advised that you call ahead to check for operating hours especially if you are visiting on a weekend.

Mecca is one of the most frequently visited cities in Saudi Arabia and the favorite among Muslin tourists. Being the birthplace of the Prophet Muhammad and Islam itself, every Muslim who has the means to visit Mecca is required to come and make a pilgrimage here at least once in his or her lifetime. Since this is a holy place, you can only enter the city if you are a Muslim. All non-Muslim visitors are prohibited from entering the city. Mecca is home to the Kaaba which is one of the holiest sites in Islam.

Visiting the archaeological site of Mada’in Saleh is one of the best things to do on your Saudi Arabia vacation. The phrase “there is beauty in the ruins” has never been truer here. This site is home to one hundred and thirty-one rock-cut monumental tombs. Most of the remains are from the Kingdom of Nabatean during the first century AD; however, traces of the remnants of Lihyanite and Roman occupation can also be found.

Mada’in Saleh was declared as a UNESCO World Heritage Site in 2008 making it Saudi Arabia’s first-ever World Heritage Site. If you have visited the Lost City of Petra in Jordan, you will find that Mada’in Saleh is quite similar in structure and origin. The good thing about this site though is you will see lesser crowd which means you can enjoy exploring the area more. There will also be lesser chances of photo bombers in your holiday family pictures.

Another Saudi Arabia vacation spot is the marble village of Dhee Ayn. While the houses are not made of marble, the village got its name because of the rocky outcrop that the villages are built on. The outcrop is a rocky white marble hill that is visible from afar. This makes it hard for visitors to miss the  400-year-old village. There are no more residents in the marble village.

This was already abandoned around four decades ago, but due to its uniqueness and history, this is still frequented by visitors all throughout the year. If you are particularly fond of archaeology and Arabian history, this would be a great place for you to check out; even the roads that lead towards the village are impressive since the province is known for over a thousand towers built to protect the village from the rival tribes.

Saudi Arabia is an Islamic country which is why there are plenty of mosques in the country. One of the best things to do on your Saudi Arabia vacation is to visit to one. One of the most majestic mosques in Saudi Arabia is the Al Shafee Mosque located in the Jeddah. Keep in mind that this is a place of worship, so make sure to wear appropriate clothing and observe proper decorum.

Non-Muslim tourists are allowed to get inside and take photos so long as it is outside of prayer times. Also, no footwear is allowed inside, so make sure to take off your shoes before entering to not disrespect the mosque and the religion. The foundations of the mosque date back to Islam’s first period. This was beautifully restored and is now one of Jeddah’s most historic and iconic mosque.

The Pearl Merchants’ Neighborhood is called as such because the residents in the area are former pearl merchants. You will see charming houses with geometric and floral designs. The most popular building in the neighborhood is the Rifai house. This was built by a wealthy merchant named Munawwar Al Refai in 1922. You can take photos outside, but it is not open for public viewing. There are similar houses nearby though where you can get in and explore.

Taking an afternoon stroll in the Pearl Merchants’ Neighborhood is one of the things you can add to your list when planning for a vacation in Saudi Arabia. Almost all houses in this area has its own grand arched gateway. You can definitely tell that this is a rich neighborhood. The designs of the houses, especially the exteriors, are every designer’s envy. The buildings are built with coral rocks from the Red Sea and then carved by master artisans. Most of the houses were built in the 1920s.

If you want to do outdoorsy stuff on your trip with the kids, Wahba Crater is another Saudi Arabia vacation spot that you should check out. The crater which measures 1.3km across and 200m deep was created by a volcanic explosion.

There is a palm plantation and picnic spots available. If you are up for a hike, there is a hiking trail that leads to the bottom of the crater. If you want to go on a hike though, make sure to get a local guide since the trail is not an easy one to take.