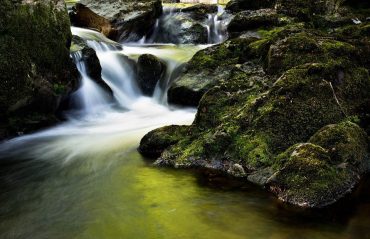 Waterfalls are an amazing work of nature and we’re yet to see a waterfall we didn’t fall in love with. With so many different sizes and shapes of waterfalls, it’s certainly hard to decide on the twenty best waterfalls in the world. From tall cascading streams of water falling from mountaintops to misty cold trails leading to rivers, waterfalls are spectacular.

Whether you’d like to take a dip under showers of cold river-water or bemuse at the magnificence of a large cascade, Here’s our pick of the best waterfalls as curated from our readers, writers, and personal travels! You might want to add some of these to your itinerary on your next short family trip.

Thrust between two provinces belonging to Argentina and Brazil, the Iguazu Falls is known to be one of the largest and best waterfalls in South America. This waterfall branches off from the Iguazu River and has an interesting mythological story attached to its initial formation. 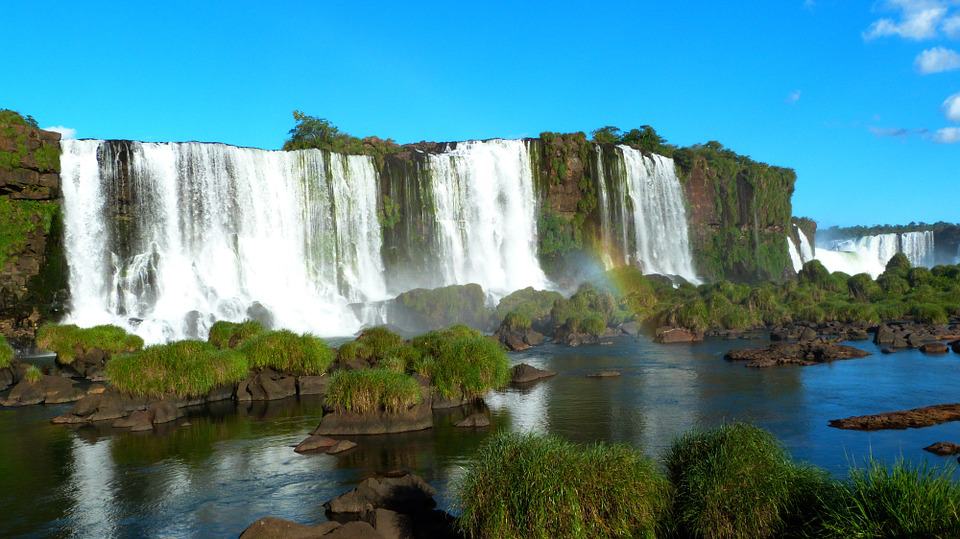 According to the Guarani Indians who used to live around the river, a serpentine deity demanded the sacrifice of a beautiful woman in their tribe. However, a warrior who loved her chose to kidnap her and flee the tribe with a canoe over the Iguazu River. Furious with this occurring, the serpent deliberately jammed his body against the river which caused a trench to develop, thus sinking the canoe of the woman and her lover.  This caused an eternal fall of the two lovers in the Iguazu Falls.

The Gullfoss is situated in southwest Iceland on a canyon formed from the Hvita River. This waterfall is actually two waterfalls with different drop points, with one falling down 36 feet and another 69 feet, resulting in a total height of 105 feet. 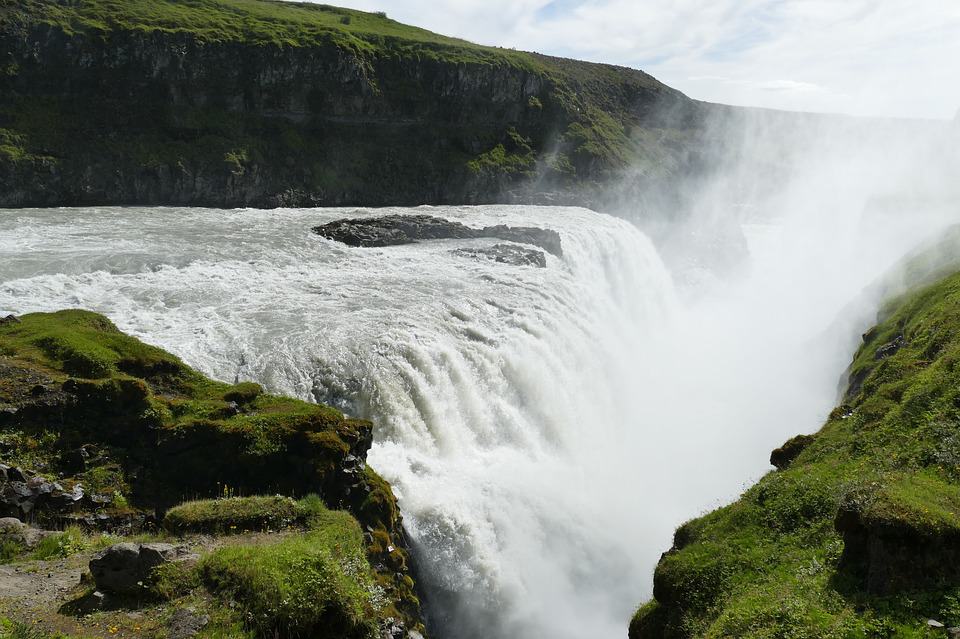 Known as the ‘Golden Falls’ among locals, the Gullfoss waterfall has a particular cool trick that easily makes it one of the best waterfalls in Europe. It has the ability to change colour to a golden-brown hue at days when the sun shines too brightly. On such days, the waterfall itself becomes an embodiment of natural beauty.

Mardalsfossen is often called the tallest waterfalls to exist in Europe, with a total height of about 2116 feet. The reason for its enormous height is because the waterfall is made up of two cataracts, which is a specific waterfall formation that happens when a stronger current of water falls down from a cliff. 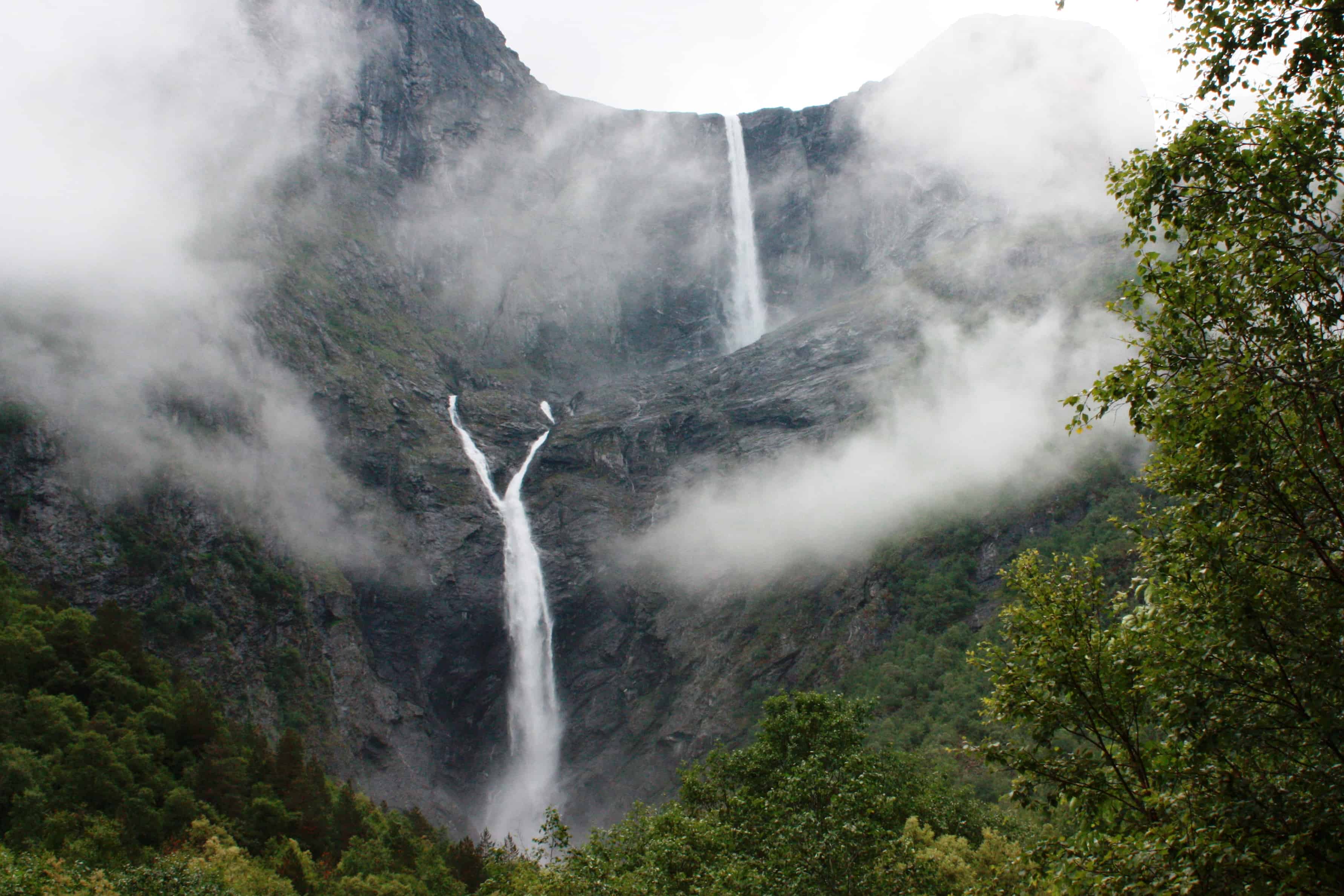 The Mardalsfossen waterfall in Norway is considered to be one of the world’s best waterfalls specifically for how it looks during springtime when snow melts off completely and the currents increase in their speed and strength. This results in the waterfall acting as one unbelievably tall cataract.

In terms of size, Victoria Falls is one waterfall which makes the Niagara Falls seem like a shower. The Victoria Falls, located in southern Africa between the borders of Zambia and Zimbabwe, is considered to be the world’s largest waterfalls. It has also been listed as one of the Seven Wonders of the World. 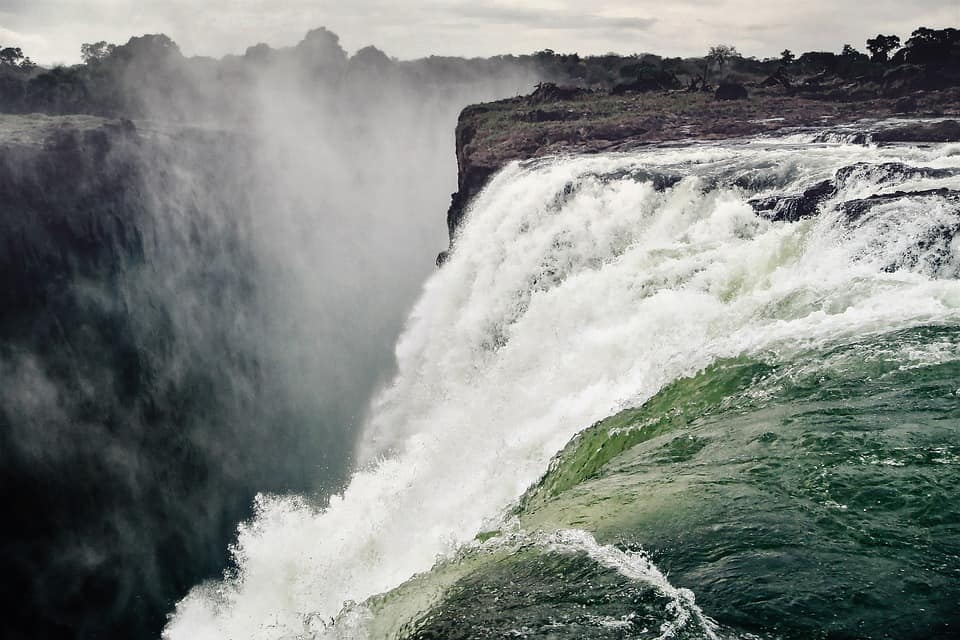 Because of its majestic look and strong flow, the waterfall was named after the powerful British monarch, Queen Victoria. It is now a favorite among locals and tourists as a natural swimming spot – where the large pool at the bottom of the fall makes its one of the best waterfalls to swim in.

Also known as the Great waterfall, this particular waterfall in Croatia stands appropriate to its given name since it is the largest waterfall in the country. 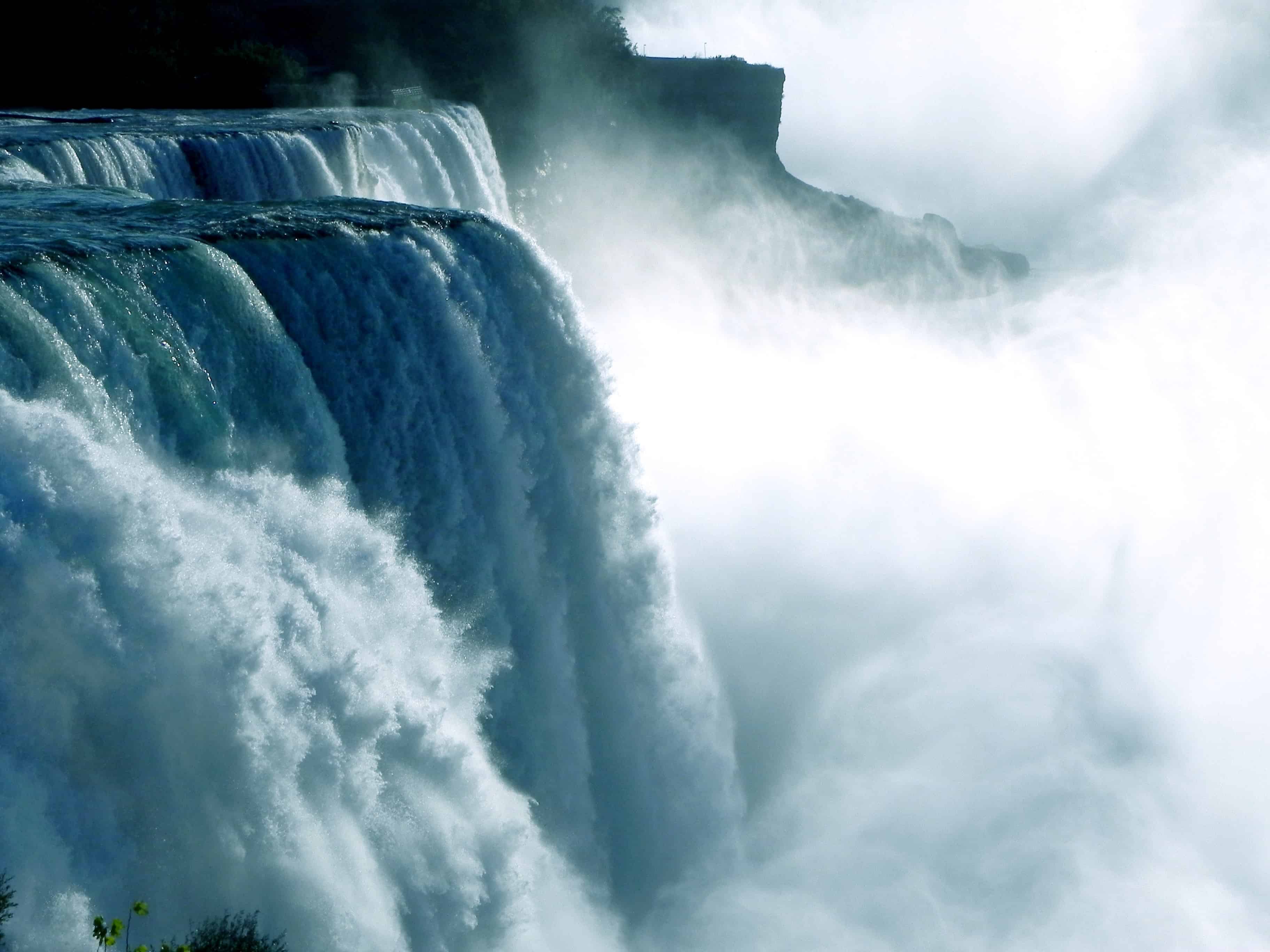 This waterfall is located in the Plitvice Lakes National Park in Croatia, where the water of its originating lake, the Plitvice Lake, is known to constantly change its colours at different times of the year. 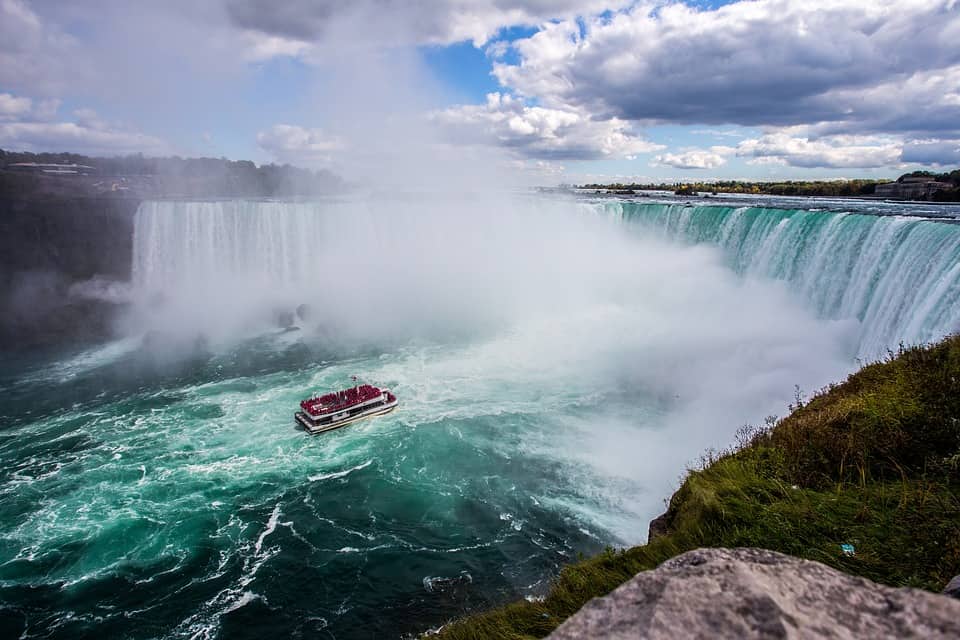 The most interesting and fact about the Niagara Falls is that it is a combination of three waterfalls – American Falls, Bridal Veil Falls and the Canadian Horseshoe Falls. This spectacular waterfall is also one of the most historic and ancient waterfalls in the world, with its complete life span being over 10,000 years.

Angel Falls is one of the world’s tallest waterfalls and in contrast to Mardalsfossen waterfall, this waterfall is a single entity.

Located in Venezuela in the little village of Canaima, Angel Falls is also one of the best waterfalls to swim in.

The Gocta Cataract is situated about a few kilometres away from Lima in the Chachapoyas province of Peru. This waterfall was once considered the third tallest waterfall in the world,

with more than 2500 feet in height. The Gocta Falls was apparently discovered by a German adventurer in 2002, who found this waterfall by accident while exploring the Amazonia.

Picture-perfect, the Yosemite waterfalls have made many travelers fall in love with its rugged molten grey mountains and scenic cascades in between. If you’d like to visit different waterfalls in the world, the Yosemite Falls must be on your go-to list. 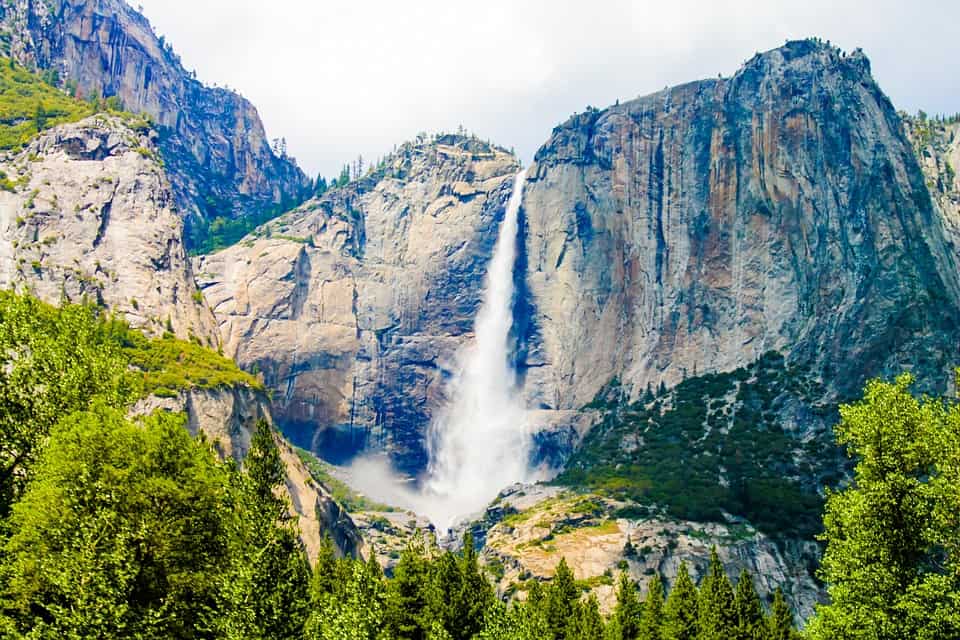 Being one of the best waterfalls in Yosemite as well as in the United States, the Yosemite falls about 2400 feet and is perfect for a hiking trip. Yosemite also harbors the world’s best natural landscape and is a haven for nature photographers. There are truly few cascades as beautiful as the Yosemite Falls.

The Kaieteur Falls has earned its name as the world’s largest single drop waterfall due to the large volume of water which courses through it. Flowing amidst the Amazon rainforest, 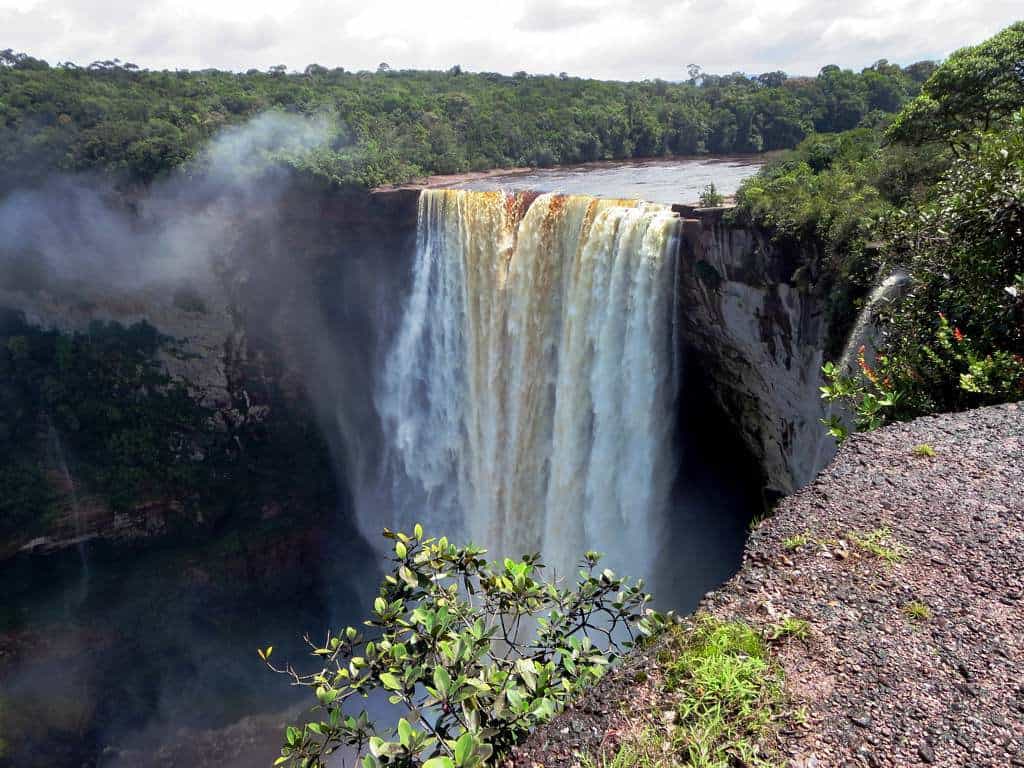 Kaieteur Falls can be found while following the Potaro River in the Kaieteur National Park. This waterfall can only be visited while in small groups, making it a perfect place for those who seek a quiet time in nature as visitors are never disturbed by large crowds of tourist.

Known as one of the best waterfalls in Africa, the Tugela Falls is the second highest waterfalls in the world with a total height of 3110 feet. Derived from the Tugela River, this waterfall can be found in the Drakensberg of Royal Natal National Park in a South African Province.

The most interesting aspect about this waterfall is that its name ‘Tugela’ translates to ‘something that startles’ – something which is aptly put as the Tugela waterfalls, with its large height and slim drop, is definitely something that would instantly startle its onlookers.

Located in the Fiordland National Park in Doubtful Sound of New Zealand, the Browne Falls flow through a small rainforest before settling down near Hall Arm. At 2,743 feet in height, Browne Falls is considered to be the 10th highest waterfalls in the world, 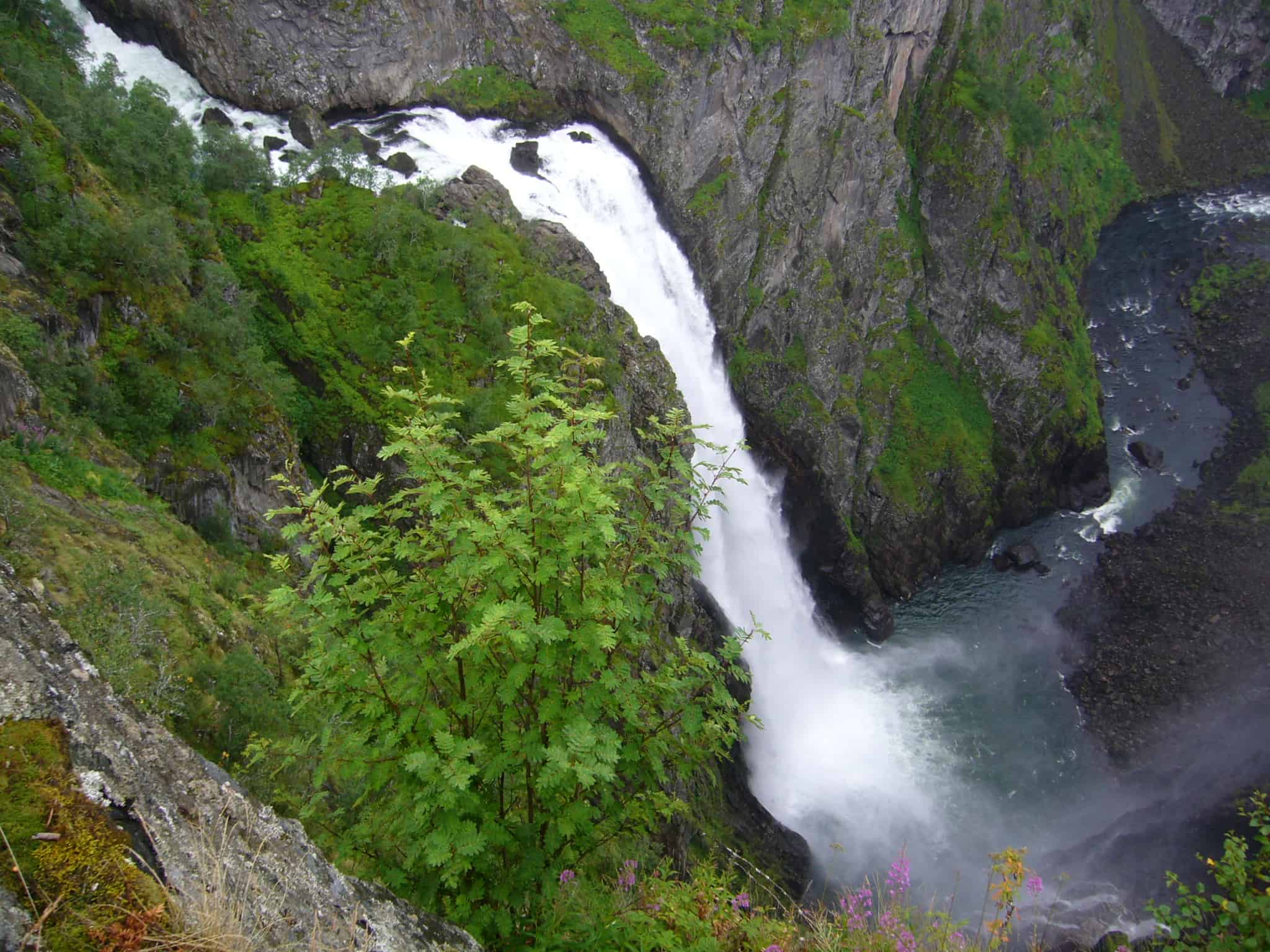 and the tallest waterfall to exist in New Zealand. The best thing that could happen to you while visiting Browne Walls is the chance to meet seals and dolphins which can be seen sometimes in the vicinity.

The Detian Waterfall is wedged between the countries of China and Vietnam and is known to be one of the best and largest waterfalls in Asia. This waterfall and its surroundings continuously change throughout the season, with its natural colours moving from a full-bloom red during springtime and a golden-yellow in the months of September to October. 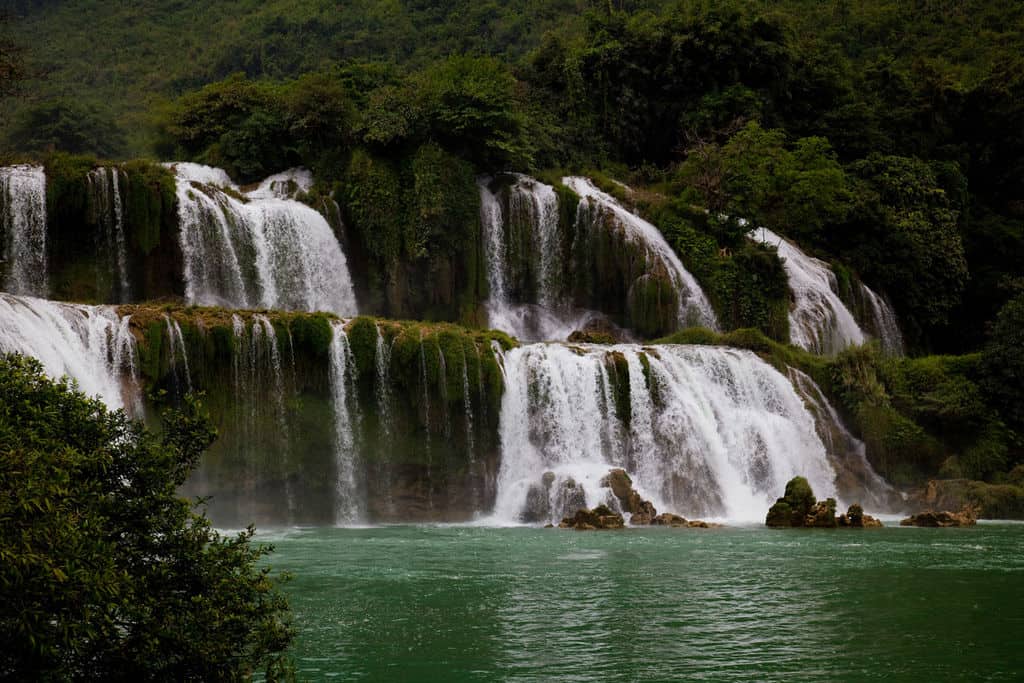 However, it is only during winter that the Detian Waterfalls turn into the most exquisite character, with its show of slow cascading waves over misty mountaintops. Visitors have even remarked at feeling calm and meditative while watching the beauty of Detain Waterfalls in wintertime.

Dudhsagar is one of the best waterfalls in India, ideally for how exceedingly tall it is. At about 1017 feet in height and 100 feet in width, the Dudsagar Waterfalls is located in the Indian state of Goa over the river of Mandovi. 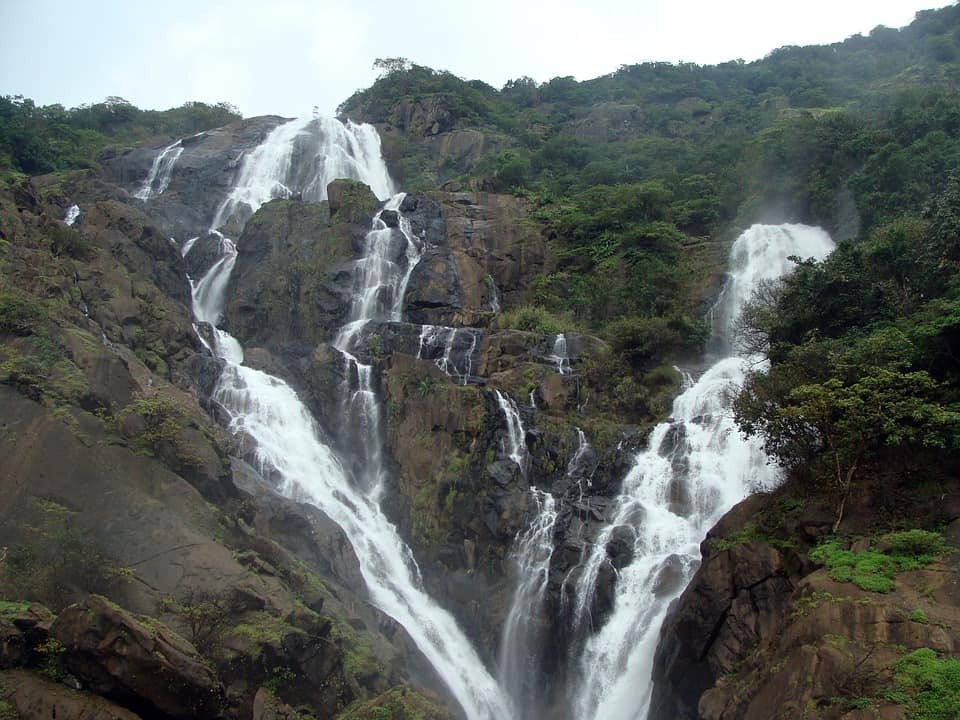 Despite the waterfall being deemed dangerous to trek around, due to a few horrific incidents having happened in previous years, visitors can still see the waterfall from a viewpoint at a safer distance – and it does get quite the crowd during holidays.

Located in the Champasak Province in southern Laos, Cambodia the Khon Phapheng Falls is considered to be the largest waterfall in southeast Asia. Branching from the Mekong River, another famous Asian river, the Khone Falls has the most beautiful natural composition, with large mountainous 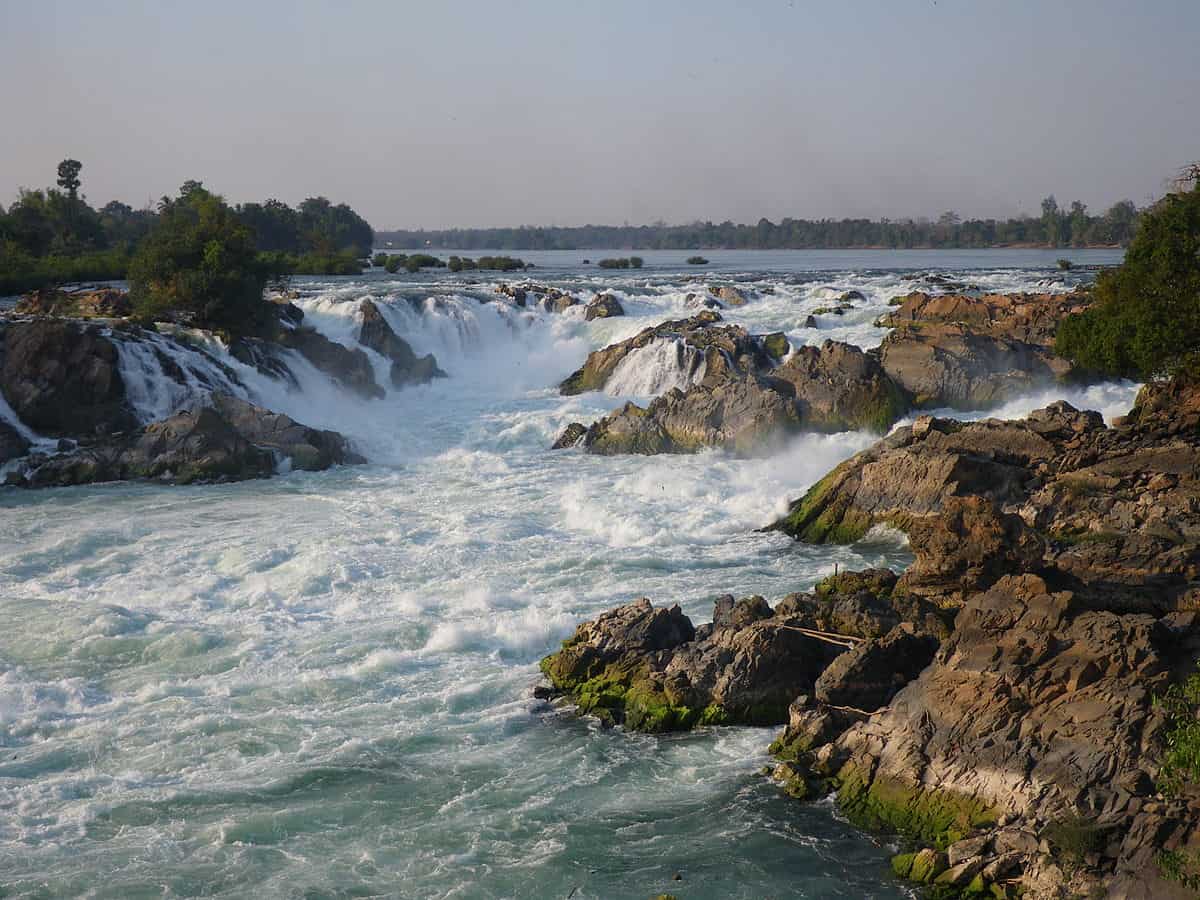 boulders forming a tiered like formation for the water to flow by on. This heavy stream of waterfall has the greatest volume among all of the world’s waterfalls, with the amount itself being double to that of the Niagara Falls.

This particular waterfall sits on the perfect spot for the sun to meet its waters, creating a perpetual rainbow at its bottom when the sun is out. For this photographic scene alone, tourists and locals alike prefer to visit the Shifen Waterfall.

Located in the village of Balaa, which lies sandwiched between two cities, the Baatra waterfall is the tallest waterfall in the country of Lebanon. The Baatara Gorge Waterfall actually descends from in the middle of three natural bridges that are shaped like a ring. It ends up falling for 837 feet into a chasm underneath the Mountain Lebanon, and can only be visited during summer months when snow doesn’t cover the cave of the waterfall.

During these times, tourists often like to participate in a few sports around the hills surrounding the cave of the Baatara Gorge Waterfall. With its rugged texture and sometimes slippery slopes, the waterfall’s cavern is perfect for those daredevil climbers who wish for a greater thrill but might not be so perfect for younger kids unless closely supervised.

The Inga Falls might not be geologically considered a proper waterfall as it is simply very strong rapids that have bended its surface to make it seem like a multi-step waterfall. Despite this, the Inga Falls still maintains the name unofficially and has even been regarded as one of the largest waterfalls in Africa and the Democratic Republic of Congo.

The Inga Falls is also one of the most powerful streams of water to be recognised in the world and has been a constant supplier of hydroelectric power to the nearby villages – a solution and contribution that has helped many locals in their daily lives.

One of the best waterfalls in Europe in terms of strength and size, the Rhine Falls in Switzerland falls from a height of 75 feet and a total width of 490 feet. Flowing from the High Rhine river, the Rhine Falls has its current roaring under the earth’s surface, 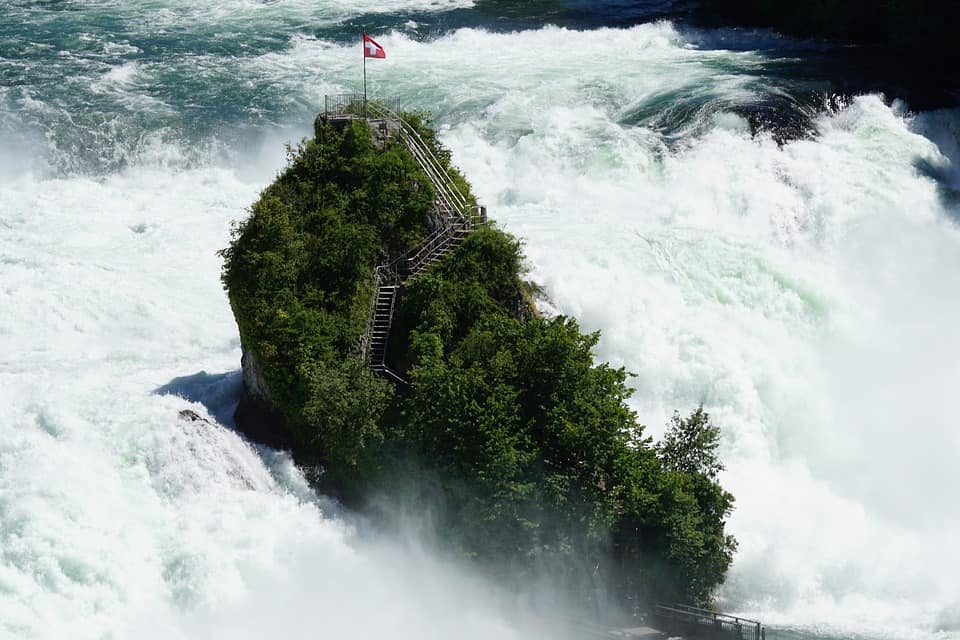 meaning anyone who stands close to the waterfall will find the ground tremble. Tourists do tend to take ships and visit the many attractions that lie along the Rhine Falls Basin, such as prehistorical castles. 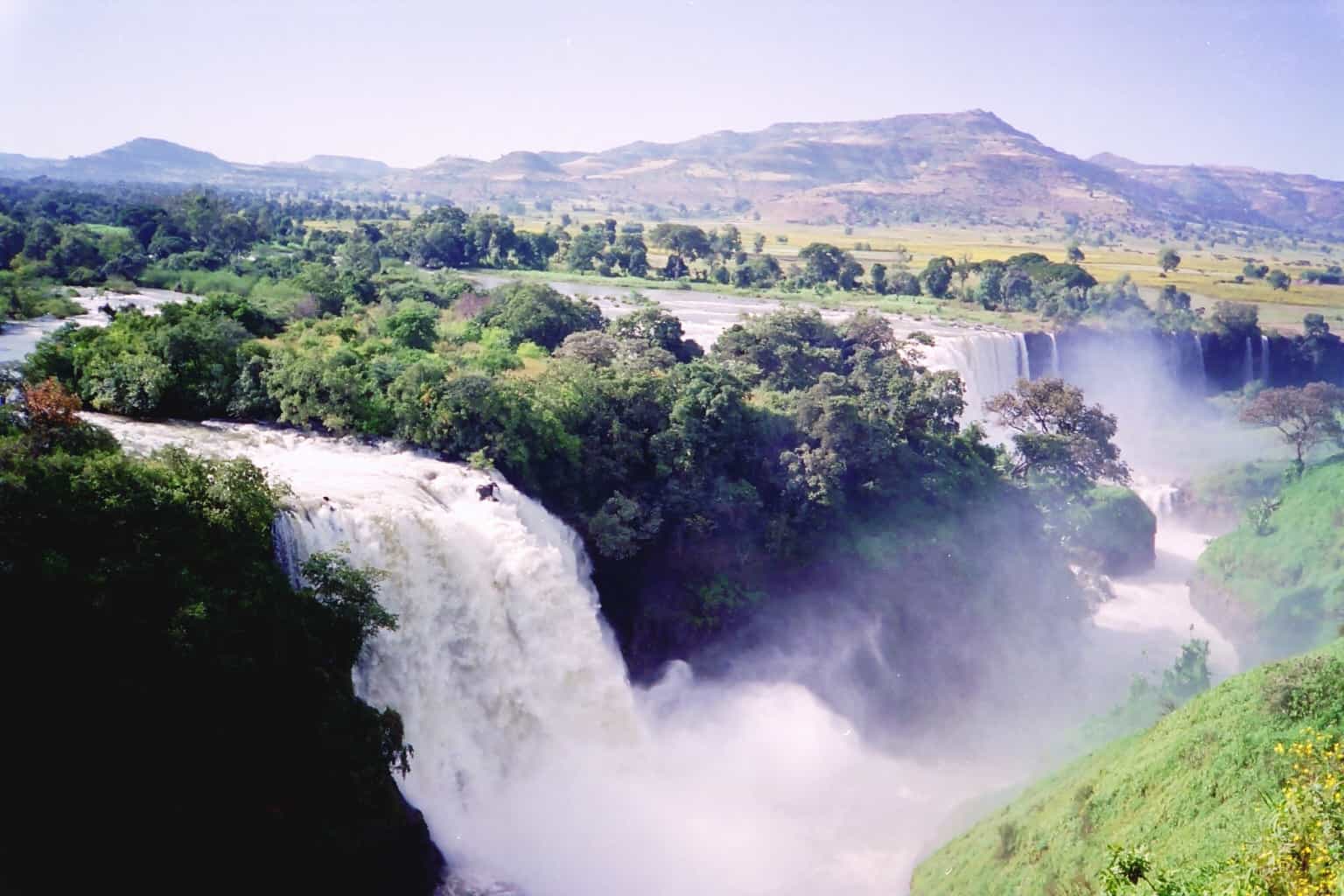 The Blue Nile Lake was initially formed from volcanic activity, which is specifically the reason why this waterfall fumes out smoke from the gush of water that crashes at the bottom of the pool.  When the sun’s out, the Blue Nile Falls has rainbows spread amidst its heavy smoke – creating the most picturesque scene in all of nature.