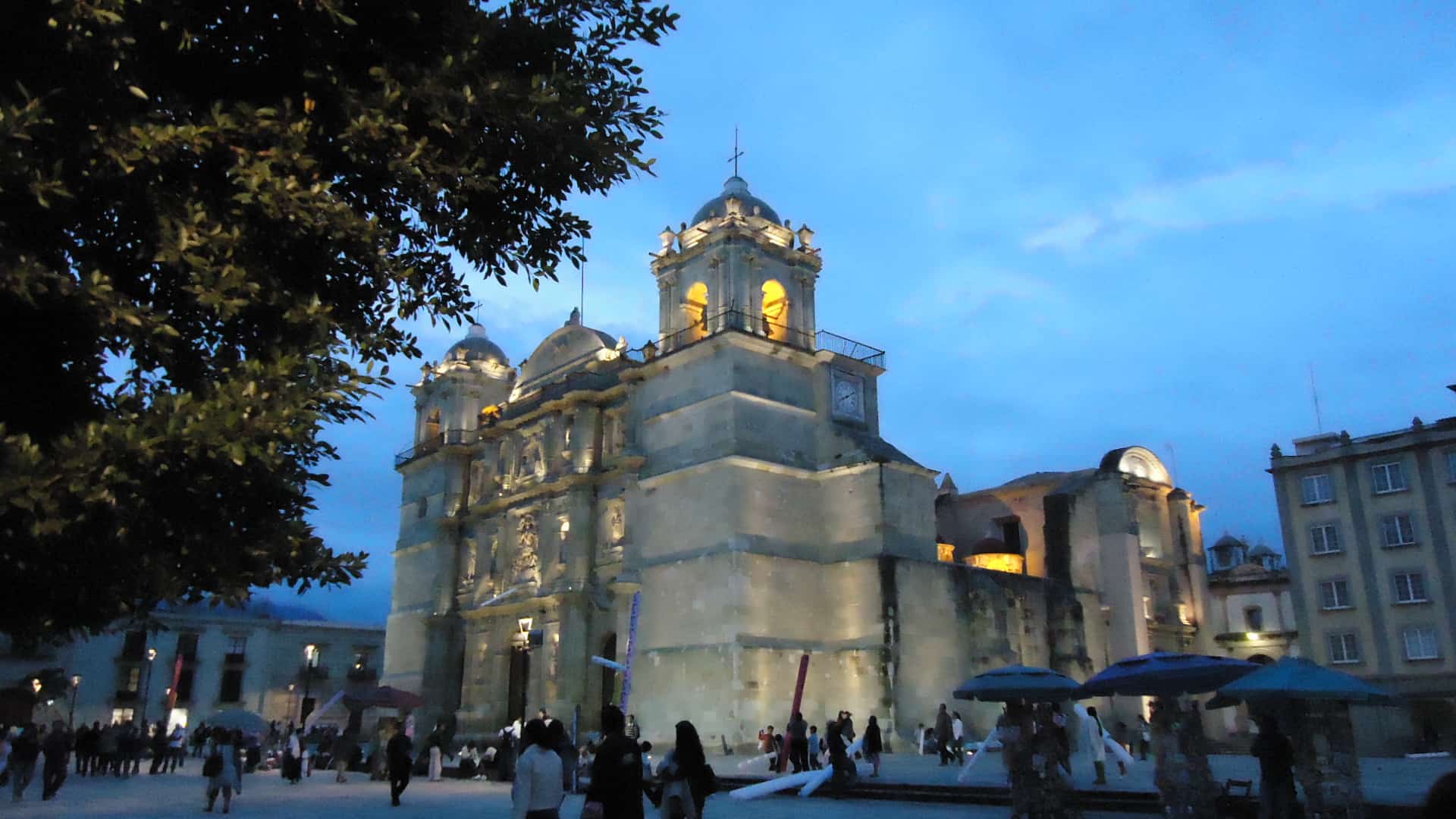 Despite the seemingly constant smears, Mexico is actually my favorite country in the Americas. The people are super welcoming, helpful beyond belief and, within its boundaries are some natural sights and cities that smash “first world” countries out of the water.

Now, I understand people’s preconceptions of this nation, and don’t get me wrong, it has its flaws, but you’d be hard-pressed to come across many of them, at least with the route I and other travelers I’ve met have taken. And if we’re being truly reflective, can any of us say our countries are without issue?

Possibly the most wonderful thing of all about Mexico is that it has something for every type of holiday maker; the family that relishes beach resorts and all-inclusive two week holidays away from the stresses of work and life, those who enjoy city breaks with their recognizable home comforts, or those like me who like to get stuck into the lesser known.

So, with the latter point in mind, here’s a firsthand experience of my off the beaten track travels through Mexico, starting in the Southwest.

Struggling to pronounce this one, I see?

Oaxaca (Wa-ha-ca, thank me later), is the capital city of the state bearing the same name in the Southwest of Mexico. I have to confess, I knew very little about the place before my arrival, other than its food is supposed to be its “thing.”

So, why should a family visit Oaxaca? “Food being its thing” doesn’t really seem like a reason to up and jump somewhere for a holiday. Well, let’s just say, when I finally pulled into this city after a seven/eight hour bus journey, I was absolutely blown away. 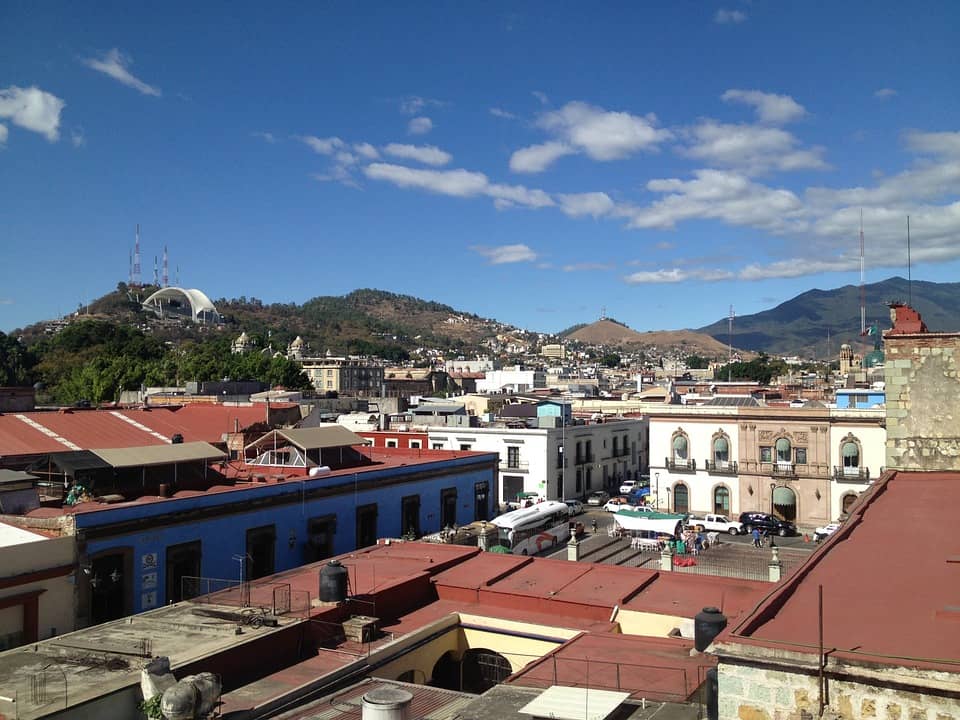 This little city is one which you can walk around in a couple of hours, edge to edge, but is one which you will want to walk around again, and again, and again (and so on). Its Spanish colonialist past has been so wonderfully preserved, with low, two, and three-story buildings all painted in the most vivid and bright colors, which when reflected in the sunlight are just the most spectacular sights your eyes can feast upon. Yellows, deep blues, pinks, greens; name it and a building is colored in it.

The pavements are spotless, and the whole city is encircled by mountains. The tallest buildings are the cathedrals and castle, which perfectly complement the rest of its cleanly gridded and traditionally designed roadways and facades. 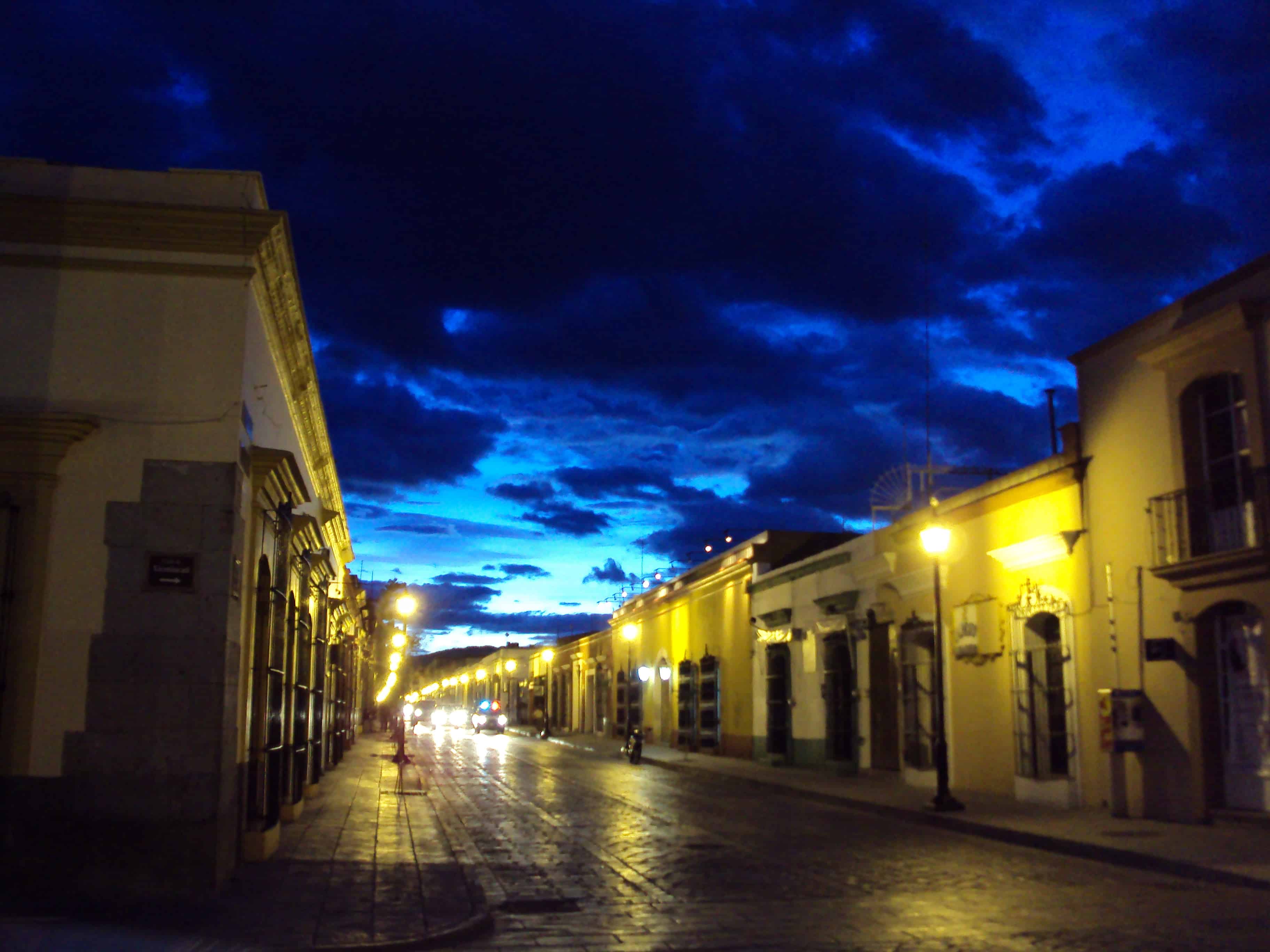 I have to be honest here, the problem I’ve found in some older world cities is that the contents of its buildings tend to also be old world, and are there as more of a museum than a living, breathing, “current” town. Nice to walk around, no fun to live in. Oaxaca bucks this trend wildly, with incredible contemporary interior design seemingly part of local law (there’s no other explanation for just how good Oaxacans are at commercial interior design).

Restaurants offer traditional foods, with a modern touch, and the recent rise in artisanal mescal production (the local spirit, which, for me, is like a smoky tequila) means this city has some of the most well-considered bars of any small city I’ve ever been to. What’s more, it’s all an unbelievably good value for the money.

Pair this with the natural beauty of Hierve El Agua’s petrified waterfall and natural, refreshing spring pools, and Monte Alban, a pre-colonial Mayan settlement, both merely a couple of hours outside the city, and you’ve got a travel destination which is up there with the best on Earth.

Another long bus ride through the mountains led me to the surf town of Puerto Escondido (meaning hidden port) – don’t worry, there’s also an airport, if you don’t feel like cramming yourself into a crowded collectivo (collective bus) or coach.

Also in Oaxaca state, Puerto Escondido is a truly bohemian – a word which is overused but genuinely meant, here – paradise. With many of those who visit this coastal town, with its chilled vibe and easy living, finding themselves seriously planning a way to make it a permanent vacation. 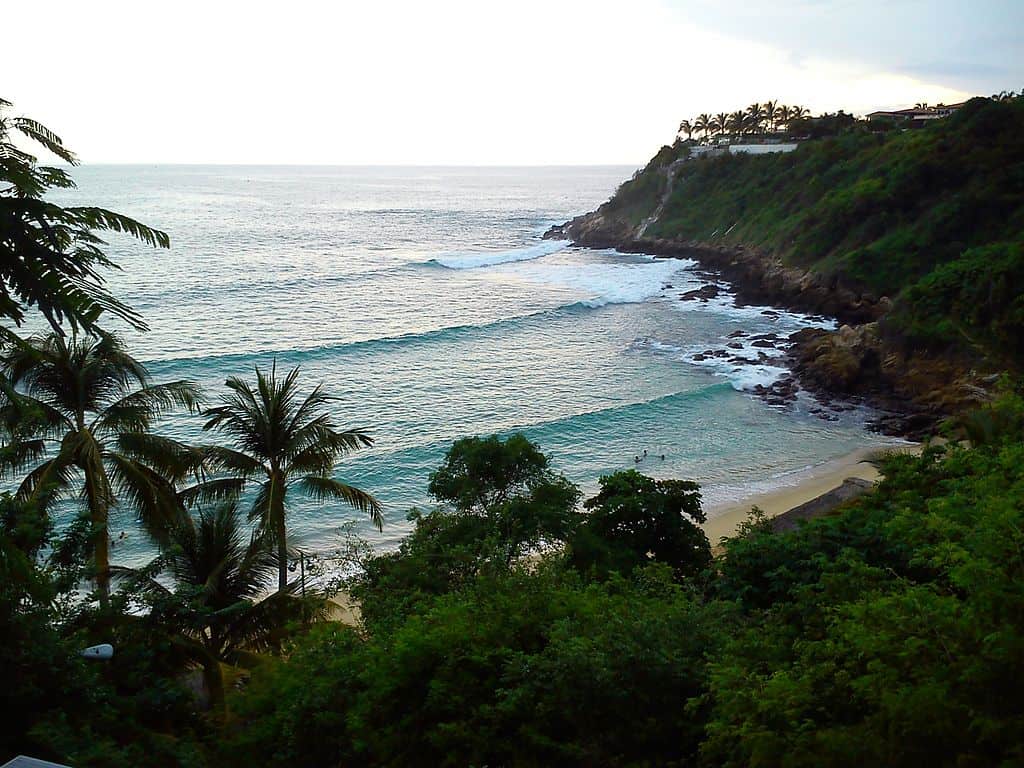 The town is broken up into three parts, with Zicatela being the enormous beach running the main length of the town, La Rinconada and its rather spectacular coves lie at the North side, and La Punta, a relaxing hippy haven on the South side. Taxis are super cheap here, with one going all the way from La Punta to La Rinconada costing only 40 pesos ($1.40-ish).

Okay, so what’s to do here?

First, fish tacos… Being so close to the Pacific ocean, the fish here are as fresh as can be, and with tacos being a Mexican specialty, the combo is just too irresistible to pass on. They’re also super cheap, with a cool little surf cafe in La Rinconada offering them out for 25 pesos.No one knows the name of this place, but ask anyone in the area (it’s only small), and they’ll point you to it – talk about off the beaten track.

Next, surf! Puerto Escondido is consistently in the top ten surfing destinations on the planet, and also being one of the more affordable spots on the planet, if you’re a novice this is the absolute must-try town. With its mix of beaches and more tranquil coves, you don’t even need to have surfed before, there’s plenty of space for everyone, and at all the beaches you’ll hear surf instructors shouting out offers of lessons. 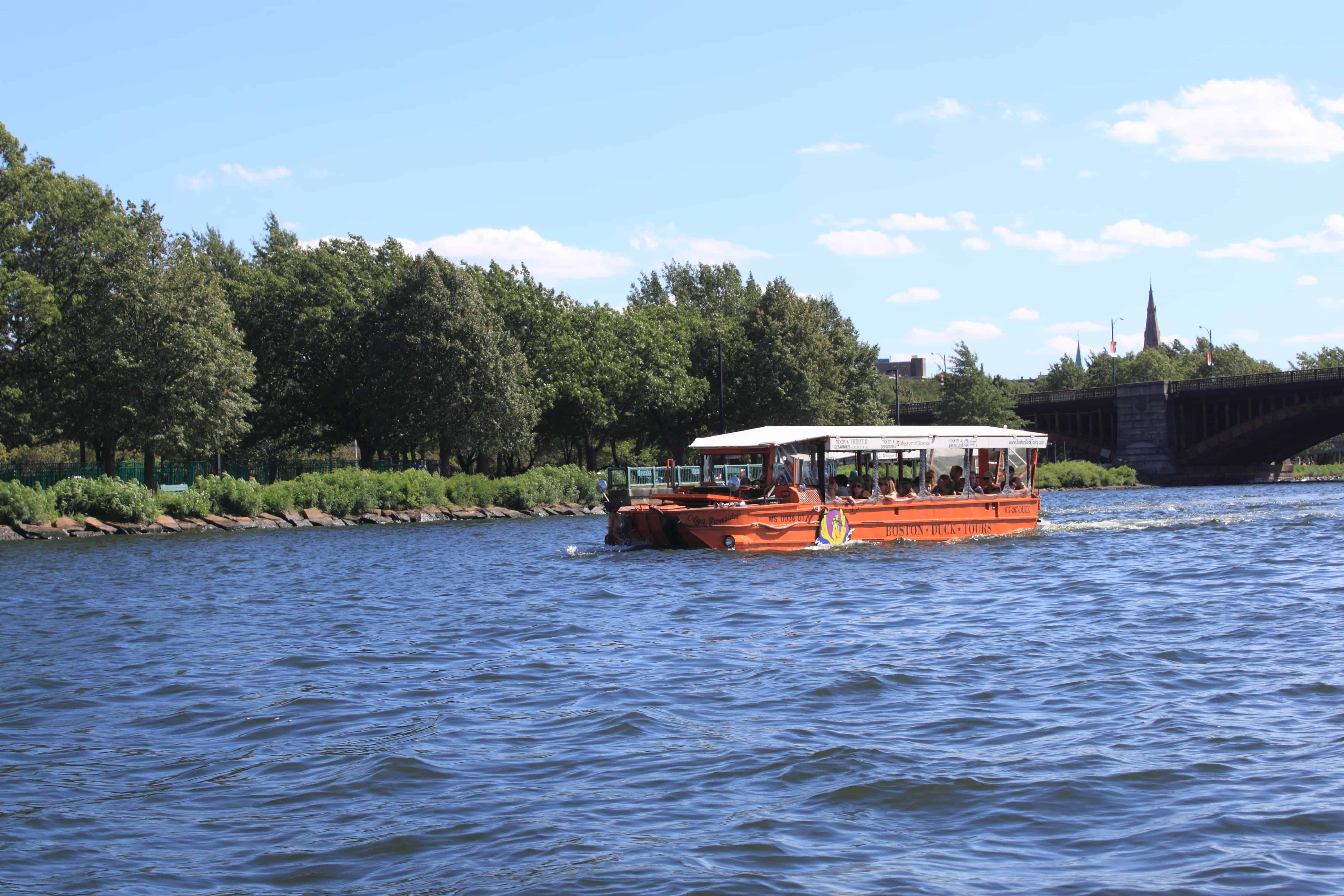 Marine life. Despite being a hidden gem, Puerto Escondido is a big holiday destination for locals and those who know, which means that there are plenty of boat tours which can take you fishing, and out to see dolphins, sea turtles, and just about any other form of sea life that wants to pass by the town, I even saw a humpback whale from afar. These are not tours in the sense of being a boat full of tourists from all over the world, these are six to eight-man fishing boats owned by locals who’ve decided this is what they want to do with their lives, so it’s genuinely supporting a local economy, and there’s a little of competition, offering a good chance to haggle for a good price.

Baby sea turtle release. This activity is definitely more seasonal, but in October on my visit, every night at a sea turtle sanctuary, there was the opportunity to release recently hatched offspring into the ocean during one of the most unbelievable sunsets on Earth. You pay 50 pesos as a donation to the sanctuary, and you get a coconut shell with your new friend in it. When you’re ready, you let it set off on its merry way towards the sea. Just a little warning for those with kids: this is still a very natural experience and as with any wild situation, there are potential predators (sea birds and crabs), so either educate or distract the little ones.

Aside from all the active stuff, it really is a perfect location to just chill for a week or two (or four, as in my case) with locals and fellow travelers over a few drinks and some excellent food, or sunbathe by the beach and get lost in your favorite novel and a fresh coconut, or oysters (God, I miss this place).

On the road again, we arrive at San Cristobal De Las Casas.

San Cristobal, as it’s more commonly known, is a city set within the lush, mountainous valleys of Chiapas, a state famed for its farming of coffee. And wait for it… chocolate! It’s also lesser known as a center for the mining of amber, the precious stone.

Set high in the mountains, San Cristobal is another fine example of preserving Mexico’s colonial past, with similarly traditional and equally colorful buildings as Oaxaca. The city, due to its altitude, gets rather chilly at night, and being from the U.K., I know cold. But, being prepared, many of the accommodation options boast cozy outdoor fire pits, perfect for gathering with like-minded characters and sharing stories of the trip so far.

The cold also brings about other positives, with local specialties being Caldero, a hot stew with various components and spicy condiments – my favorite place to try this is El Caldero, if you can grab a seat, and hot chocolate, which is typically a mix of 100% cacao with a choice of additions – spots for this are absolutely everywhere in the city and a heavy sampling from each simply must be achieved (chocolate and chili is a personal favorite).

For a real off the beaten path experience, San Cristobal is only a few miles from San Juan De Chamula, a small town with hybrid influences from ancient Mayan and relatively modern Catholic cultures, where locals speak a mixed dialect of Tzotzil (a type of Mayan) and Latin American Spanish. It’s worth the trek (or inexpensive taxi ride) just to visit the church, where Catholic idols are worshipped alongside the ritual slaughter of chickens (again, maybe distract the kids at this point). It sounds barbaric, but tradition is tradition, and the bird probably makes a meal for the family for days. 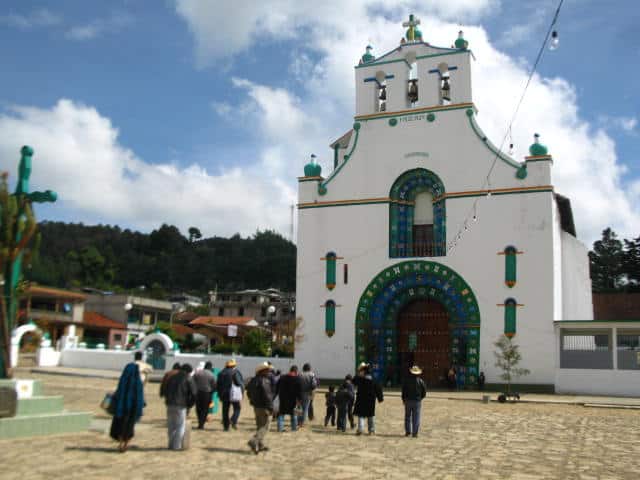 The people here are super friendly, as with everywhere on this list. I found myself naturally throwing a “buenas” (hi) out to people I met along the way, receiving the same greeting in return with cheer.

Okay, so everyone knows of Chichen Itza, I’m sure? Well, how about the same concept, but in the middle of the jungle? Welcome to Palenque, or at least the national park. Palenque itself is a town you can kind of shrug off with very little worry that you’ve missed anything. It’s got some okay eateries, okay shops, and, well, that’s kind of it.

El Panchan (a short and cheap collectivo taxi away) is the area to stay for the more adventurous family travelers. Here there are numerous jungle cabanas on offer. I stayed in Kin Balam, with mixed number cabanas, most having their own showers and toilet included (yes, that’s actually a thing to look out for here), its own pool to escape the humidity and literally at the entrance of the national park, its luxury jungle immersion at its finest.

Palenque National Park hides a full Mayan township within its jungle habitat, equally impressive as its sibling near Cancun, with nowhere near the same number of visitors and howler monkeys swinging from the surrounding trees, it’s common to feel like you’ve been transported back in time. 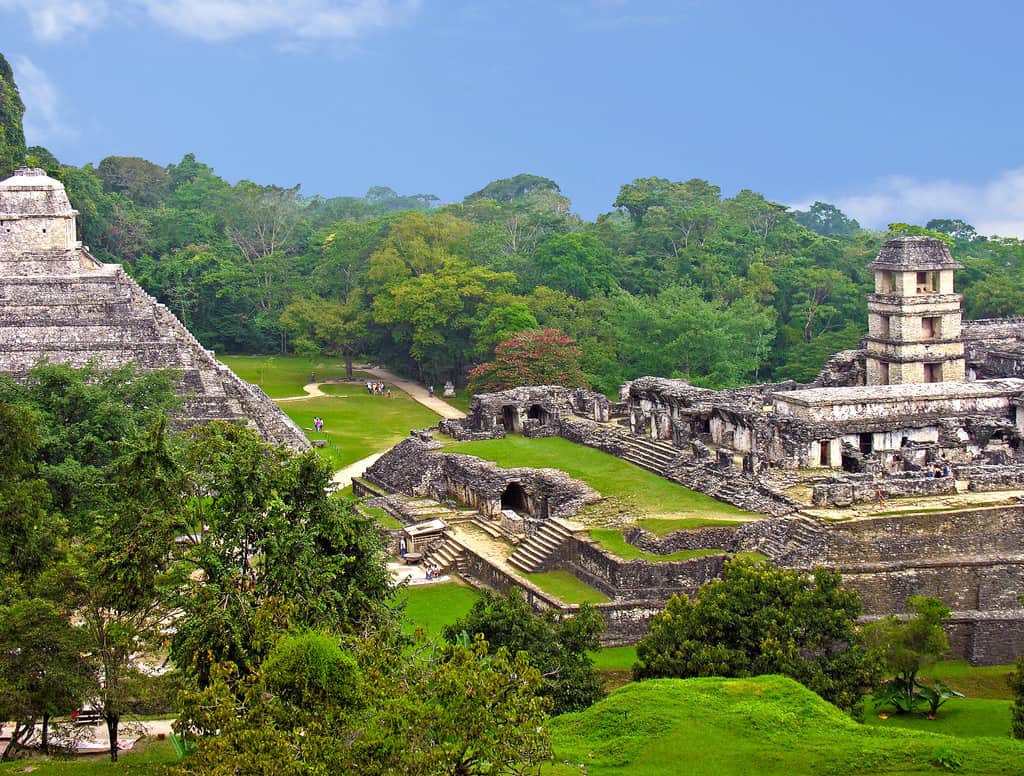 Palenque is also far less expensive to visit than Chichen Itza, and the national park boasts a couple of jungle-looped treks, where the aim is to try to spot howler monkeys and numerous other creatures and critters while walking alongside rivers, waterfalls, and further hidden Mayan temples that scatter the area.

I only visited for a few days, which gave me enough time to see the ruins and jungle, while also venturing out to other natural beauty spots, such as Agua Azul, which is a series of blue-green cascades a couple of hours drive from the park.

Mexico is a huge country with so many incredible secrets to unveil, and areas where tourists are yet to venture.It’s a destination that should be on everyone’s “to visit” list, and is certainly on my “to go back and explore again in more detail this time” list, despite spending nearly two months there.