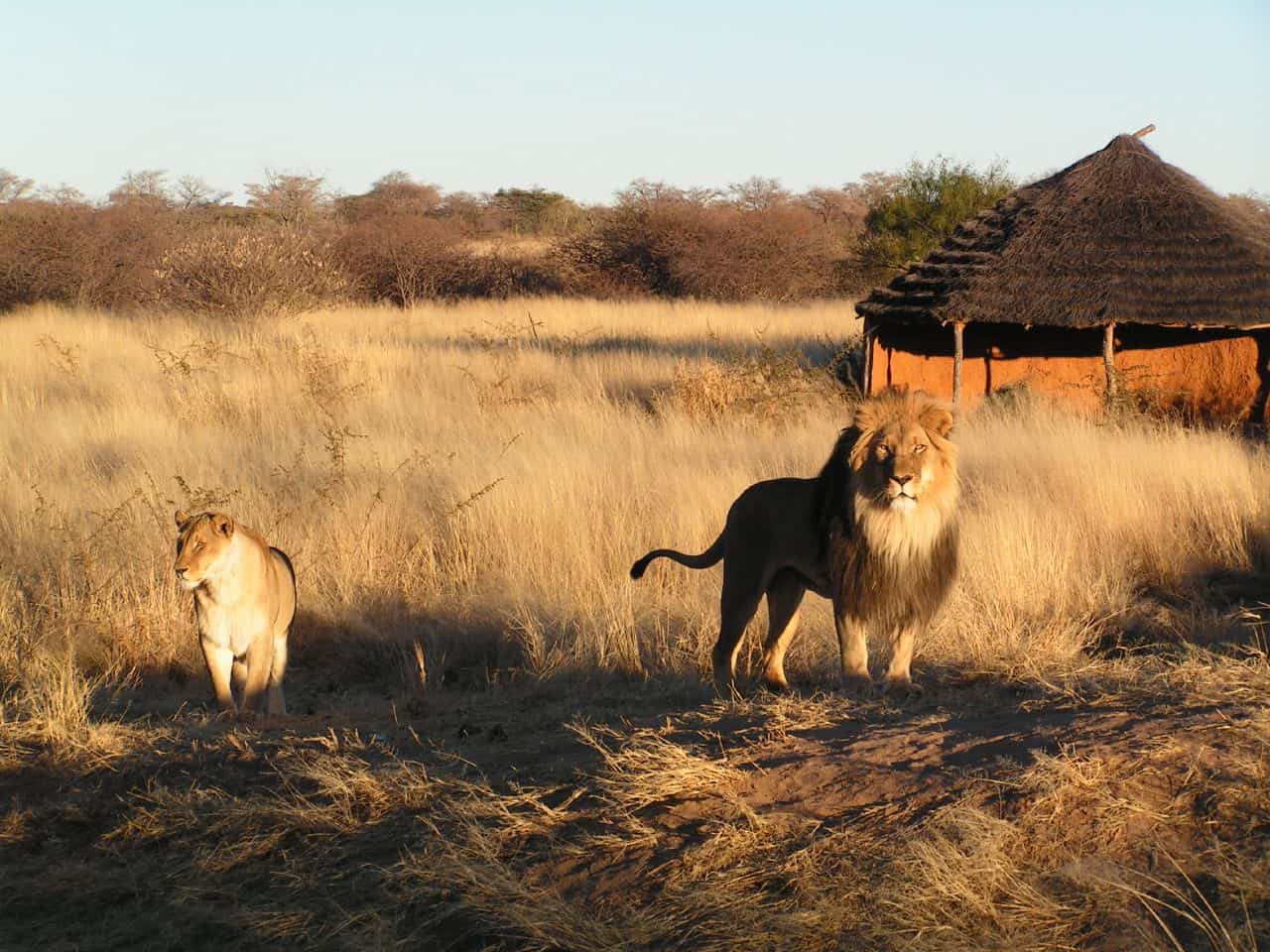 There are few countries in the world where one can expect to see “The Big Five” on an African safari, and Namibia is one of those lucky countries. The Big Five wild African animals, that is! – lion, elephant, rhinoceros, leopard, and Cape buffalo. In fact, you can add to that list to make the modern Big Nine by adding hippopotamus, zebra, giraffe, and cheetah. And you can just keep going, because Namibia has hundreds of more species of wonderful wild animals, plus beautiful African landscapes and deserts which make Namibia a great place for a fabulous safari vacation. 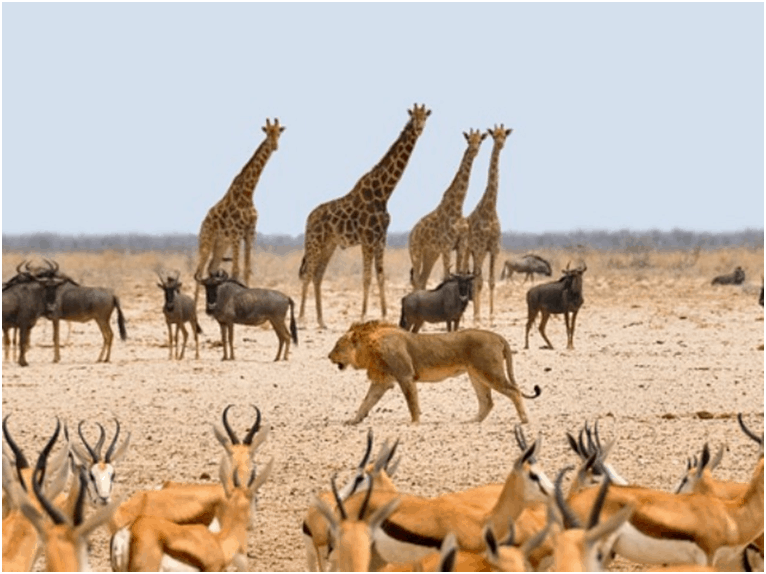 Giraffes and wildebeest keep a wary eye as a lion marches through the herds on his way to a water hole at Etosha National Wildlife Park in Namibia.

The Big Five was a term originally coined by big game trophy hunters. but has been adopted by people who are far more likely to take photos than trophies. It might have been OK in Earnest Hemmingway’s day, but shooting animals for heads on a wall is becoming increasingly less accepted. Hunting for trophies is probably not the highest threat to endangered species though, as poaching for ivory and rhino horn for dubious medicines has far more dire consequences.

One of the best places for the opportunity to see four of five is Etosha National Wildlife Park towards the north of Namibia. Etosha is a stunning park by any stretch of the imagination,both in size the amount of extraordinary African wildlife that it contains. The park is so large that it can easily be seen from outer space, and astronauts have been known to photograph it as they zoom over. How amazing is that? To give another comparison, Etosha National Wildlife Park is as large as the country of Switzerland. It also contains a very large salt pan which covers over 20% of the area, so in the rainy season parts of it become a shallow lake. 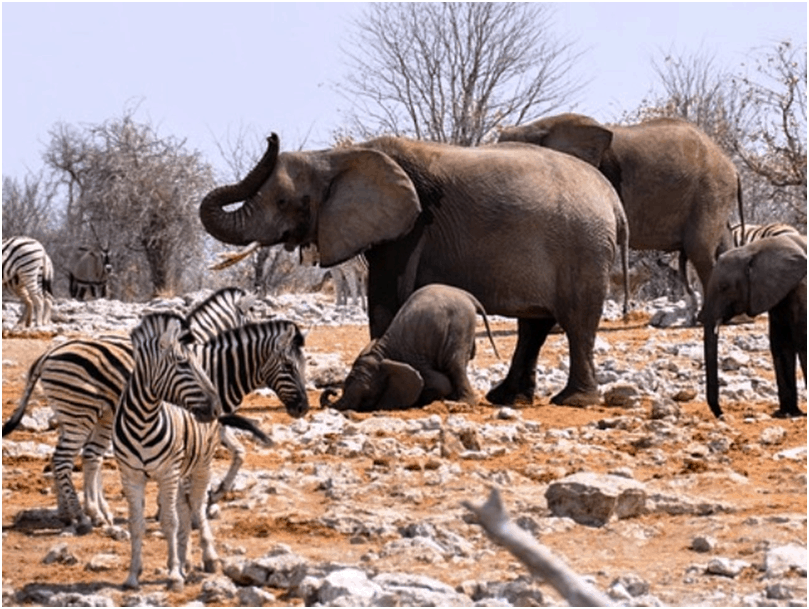 Elephants and zebra chill out together in Etosha National Wildlife Park, Namibia.

By far the easiest way to get around on your Namibian holiday is by private vehicle, which can easily be rented in the capital Windhoek. Or you could book a organized safari.  There are many experienced and well organized companies. You can actually self drive through Etosha National Park during daylight hours, and then stay in one of the four well appointed camps overnight before venturing out again the next day. I had days there, but could easily have stayed for weeks. There is always plenty to see.

You can visit any time of the year, but winter May to September is the dry season, which means animals have to visit the water holes regularly and you can park up and “spy” on them easier. It’s also a bit cooler for humans who don’t like sweltering in heat. However, that is not to say you should avoid taking a Namibian holiday at other times of the year.

At one waterhole, we sat watching a large young bull elephant for quite some time. It was difficult to judge just how large he was until you compared an adult zebra who could almost walk under his tummy! He also had a particularly strong odor which was quite startling when you are downwind. That doesn’t show in any photo! 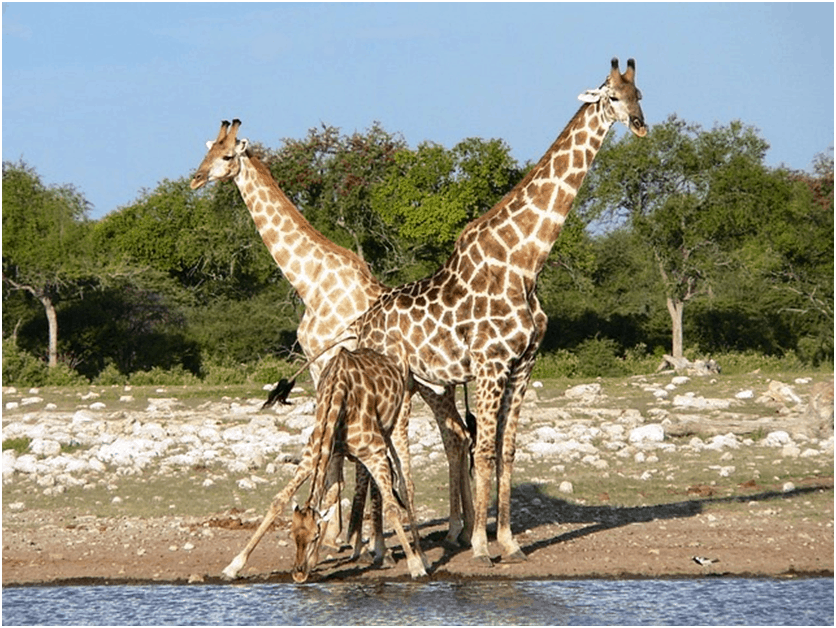 It’s not so easy to reach the water if you are a baby giraffe at a waterhole.

Namibia, and Etosha especially, has one of the largest populations of Black rhino left in the world, and is one of the few countries that has both Black and White Rhinos. Rhinoceroses are one of the world’s most endangered species because of loss of habitat and from illegal poaching. In order to combat the latter, many of the rhinos are dehorned so that they are of little use to poachers. The horn regrows though, so the process has to carried out every few years.

All of the animals are relatively used to vehicles and generally ignore them. Needless to say, however, wild animals can be dangerous, so everybody should show respect and stay in their vehicle regardless of which species is close by. Keep doors closed, and windows if predators are close. If you were to click open a door, the predators would instantly look interested. Alternatively, any prey would bolt off in the other direction.

Etosha is not the only place you can see wild animals in Namibia though. For the chance to see Cape buffalo and hippopotamus you will need to travel to the northwest to the Caprivi Strip which reaches all the way to the Victoria Falls. The north is also on the edge of malaria territory, so while it is not likely, it is possible to be exposed to mosquitoes that may carry the disease. Take precautions by wearing dark covered clothing (they prefer lighter colors) and use repellent while there.

Namibia also has some special breeds of the Big Five that live in the northwest Kunene region, namely Desert Elephants and Desert Lions. These breeds have adapted to extremely arid conditions that would kill most creatures. Desert elephants have been known to travel up to 40 miles in a day in search of water and food. They are not great in number, and are increasingly threatened by poaching, so let’s hope the authorities in Namibia manage to protect these unusual animals. Diversity is everything in nature. 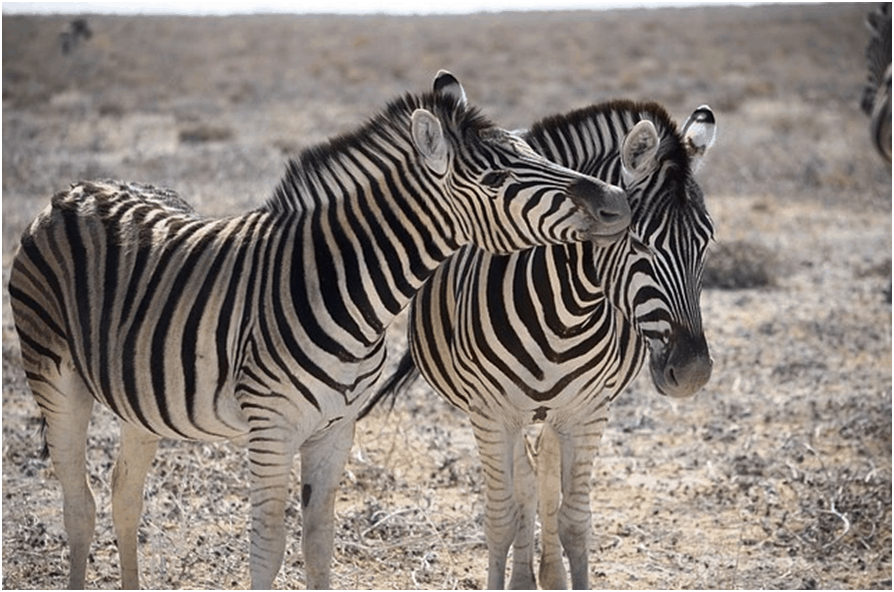 A cute zebra kiss between friends.

Even if you don’t achieve the Big Five during your holiday, you can still be assured of seeing hundreds of wild animals. Some of the most numerous are my favorites, zebra for instance. There are thousands of them munching happily on the grass, their chunky striped bodies healthy from abundant food with little tails constantly flicking against insects. I know they are not actually small, but I keep thinking of my Shetland pony when I watch their playful antics.

Another fairly common African animal you will see as you drive around is giraffe. They amble among the acacia trees,reminding me of walking oil wells or towers. And when they run, their impossibly long legs seem to move in slow motion, but in reality they are covering a lot of ground with each stride.

I never saw a leopard in the wild, but I did see their prints in the mud on the farm park I had the privilege of making daily horse rides around for some months. One of their favorite foods is baboons ,and the latter were plentiful around the farm, barking at me in warning form rocks in the mountains. Where there are baboons, there are likely to be leopard. I suspect my horse smelled leopard one day as she spent a long time sniffing the grass under a large tree that had been claw marked and was very reluctant for us to continue down a dry river bed track. She almost skipped with joy when I turned her head and headed back up to steep incline away from the riverbed. I always defer to horse wisdom. 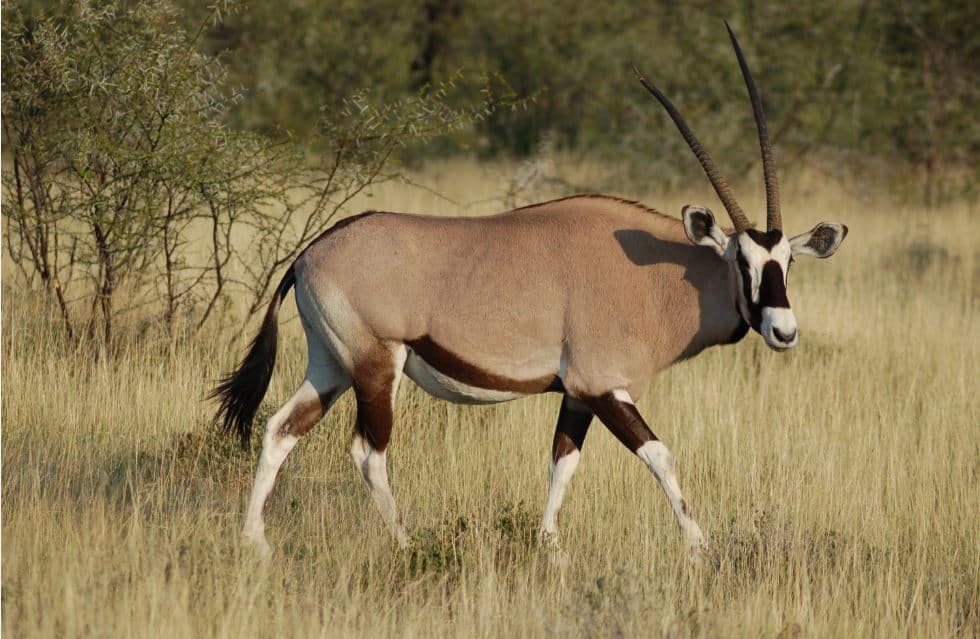 Other animals I often saw on my rides were oryx, also known as gemsbok, kudu, eland, waterbuck, and wart hogs. I never tired of seeing any of them, but elegant oryx were always a wonderful find. Another rare find I encountered one day was a magnificent red Hartebeest I am not sure who was more surprised, he or I. He didn’t hang around long though, and bounded off into the bush.

Regardless of how you choose to travel on safari, open jeep, quad bike, or horse you will be assured of a wonderful Namibian adventure. There are so many areas to explore and fascinating animals to watch I am sure you will dream about your holiday long after it is over. That is the best time to plan another one.