Backed by Richard Branson, Virgin has begun to release pictures and plans of their new adult-only cruise ship. With its growing rate of successful stakes in aviation, trains, hotels, and space travel, it comes as no surprise that Virgin is making its way into the arena of cruise ships as well. With all the rumors about this glamorous new ship, I decided to take an in-depth look and find out what’s really true.

Virgin Voyages is calling their first ship the Scarlet Lady, and it’s the first of three ships being created by the hugely successful company. Each one comes out a year after the one prior. The ship’s builder, Fincantieri, says it will weigh about 110,000 gross tons and stretch 278 meters long and 38 meters wide.With 1,430 cabins, it will have the capacity to hold more than 2,770 passengers who will be serviced by a crew of 1,160. However, Virgin doesn’t refer to their passenger as passengers but as “Rockstar sailors.” The ship provides private airport transfers to its sailors as well as access to an exclusive terminal pathway.

The creation of the Scarlet Lady is meant to draw in those who would normally never consider a cruise vacation, and what sets this ship apart the most is the fact that it only allows passengers on that are 18 and older. The new cruise line said in a statement, “The decision was driven by feedback from future sailors and travel professionals, who are looking for a more elevated and premium experience, with a few Virgin style surprises.” Whether you’re a parent wanting to get away from their kids, a teacher that doesn’t want to experience work away from work, or a group of singles who don’t want their fun disrupted by the antics of children, you are guaranteed an “elevated and premium” experience with adult-only fun and no kids onboard.

The boat holds 78 luxury Rockstar Suitsall located on the 15th deck of the ship. Each room is made to for the purpose of continued revelry so that the partying doesn’t have to stop once people go back to their rooms. Dee Cooper, the senior vice president of design for Virgin Voyages, said in a press release, “We didn’t want to create the same old box of a bedroom that our sailors would only use to lay their head down at night, we wanted to reshape the entire cabin experience.” 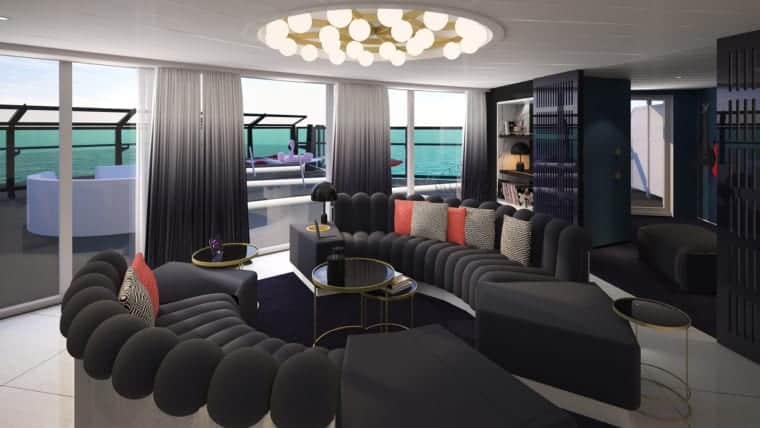 Every one of the cabins is equipped with a custom-designed “Seabed,” as Virgin calls it, which they describe as the “first-ever transformational cabin bed at sea.” The purpose was to dispose of the “unspoken awkwardness” that passengers experience when they go back to their room to relax with friends and have nowhere to sit but on the bed. According to the release, “the concept of the Seabed came from the convivial nature of cruising, and gives sailors more space for social gatherings.”

All of the cabin lights automatically adjust to “enhance the time of day based on where the ship is in the world,” just as they do with Virgin Airlines. 93% of the ship’s cabins will include a view of the ocean, and 86% have a terrace attached to their room. Among the 78 luxury suits are rooms created and designed specifically for groups as well as solo travellers. Rooms for groups are equipped with four chalet-style bunks.

All of the bathrooms are made almost entirely of marble, and Virgin claims they have “rock and roll style rider sheets to satisfy even the most diva-like of requests.”

The Massive Suits are the best in the ship, and to go with the Rockstar theme, they have an extra room – which could also turn into an extra bedroom – full of guitars and an amp. Each Massive Suit contains a special lookout point at the front of the ship, a private terrace, a hot tub, a runway table – yes, runway, with steps up to it in case you decide to do a catwalk between the first and second course – for entertaining guests, and an open-air window to see the ocean while you’re in the shower.

The Inspiration of the Scarlet Lady

“We wanted to inject a bit of exclusive, distinctive, luxurious feeling nostalgia in a contemporary way that speaks to today’s traveler more,” said Dee Cooper, so the cruise ship has a contemporary style with upscale hip elements. You’ll find lots of deep blue throughout the ship with dichroic décor to accentuate the sea, but everything else is reminiscent of the rock and roll era with pictures and such of different past icons. Altogether, the style is a sort of retro-futuristic, a design meant to feature the “modern romance of sailing.”

The ship is made up of 399 sections that must be separately assembled and then put together by the talented Fincantieri at his shipyard in Genoa, Italy. The outside of the ship is a sleek gray hull and smoked glass with red accents for Virgin, of course. And then each of the three ships that will be coming out will have a mermaid on the side to represent “the feminine spirit of the ship.”

To differentiate itself from other ships and cruise lines even more, Virgin Voyage has some interesting policies, most that you will applaud. For one, they have set a no tipping policy, which is highly unusual. They are also committed to having no single-use plastic products like straws, sugar packets, bottles, etc. to keep from adding to the problem of waste in the sea.

At this point, it’s to be expected that the ship will have ample dining options, and you are right to assume so. The Scarlet Lady offers over 20 dining and drinking options. To keep an elegant and refined, yet relaxed atmosphere, they have no buffets, formal nights, main dining rooms, or assigned dining times.

One restaurant bears the name The Test Kitchen as it is meant for the experimental diner – and chef! It’s “part cooking school and part restaurant.” Virgin also described a Korean BBQ restaurant: “Hosted by the loudest servers at sea, each meal will begin with a complimentary round of soju for the table and throughout the evening sailors are encouraged to take part in lively Korean drinking games.”

Pink Agave is the Mexican restaurant onboard designed with “immersive void lighting” to resemble the “vibrant streets of Mexico,” and there are several more delicious and entertaining restaurants on the luxury ship. What’s said to be the restaurant to beat all restaurants is one called Wake as it gives phenomenal views of the ship’s wake. It takes a unique theatrical spin on steak and seafood and is supposedly “the most glamorous restaurant on the ship.”

And best of all, all food is included in the fare!

The ship has numerous places to enjoy time with friends or relax on your own. Richard’s rooftop is “an exclusive chic outdoor lounge,” while the Athletic Club is another outdoor lounge; however, this one claims to have the largest daybed at sea. Finally, there’s another luxurious outdoor lounge called The Dock. Virgin has also released pictures of a glistening, retro nightclub called The Manor.

Finally, if you meet friends on board who you want to never forget, guess what? You can get matching tattoos! The ship holds a tattoo and body piercing parlor called Squid Ink in partnership with New York’s World-Famous Ink.

Each of their itinerary options is just as enticing as the next; it’s hard to choose one! Diana Block Garcia, the vice president of itinerary and destination development, says,“We have composed itineraries that have a sense of palpable culture, history and above all induce that carefree feeling that you only get while on holiday.”Currently, they are advertising three options:

The Scarlet Lady still needs a bit of work, however, but the time for its release is quickly approaching. The luxury cruise is said to depart Miami for the Caribbean for the first time in 2020 with the next two boats coming in 2021 and 2022. Celebrate Valentine’s Day this year with a future trip on the Scarlet Lady as they are open for booking on February 14!