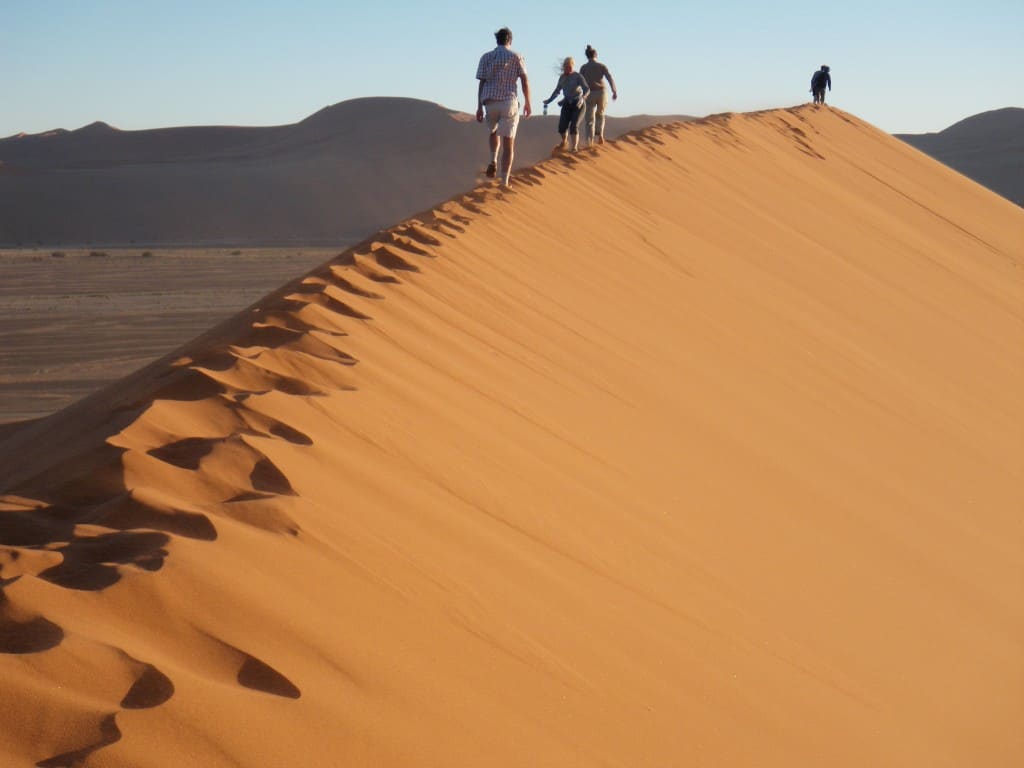 Namibia might just be one of those countries that you have never heard of but once you know about it, you will never forget. You’ll find it on a map of Africa, just above South Africa, facing the wild Atlantic Ocean with a border to Angola to the north and Botswana to the East. The easiest way to travel to Namibia is by flying through South Africa’s hub airport of Johannesburg into Namibia’s international airport close to the capital city of Windhoek. 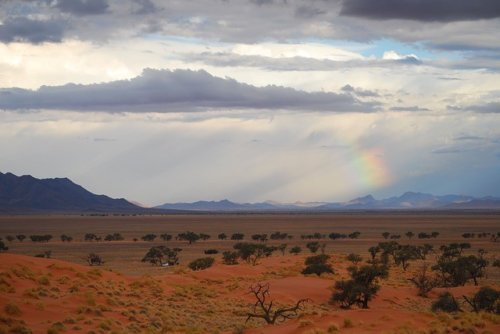 A rainbow appears in the distance of a typical African vista in the Namibian summer, when it rains more often.

Starting your Namibian holiday in Windhoek makes sense, as it is quite central, you can organize a vehicle, familiarize yourself with the area, and collect a lot of information in the city. It’s quite modern with large supermarkets, pharmacies, phone shops, plus safari offices so you can prepare well for your Namibia holiday.

Namibia is a relatively large country with almost 320,000 square miles of territory, which is slightly larger than France, but has a very small population of about 2.5 million. That means a lot of wide open spaces to explore! Namibia has many different landscapes, including different kinds of deserts from flat rocky plains to sand dunes to salt pans, high bushveld to large ancient boulder mountains, and remote desolate coasts. Where you decide to travel to depends on how much time you have and what sort of places you wish to see.

The currency of Namibia is the Namibian Dollar but its value is linked to the South African Rand, so check for the latest rates. Namibia is not a cheap country to travel through, and the government prefers to keep it that way with smaller groups of discerning tourists rather than multitudes that would crowd sites and put a lot of pressure on popular destinations. 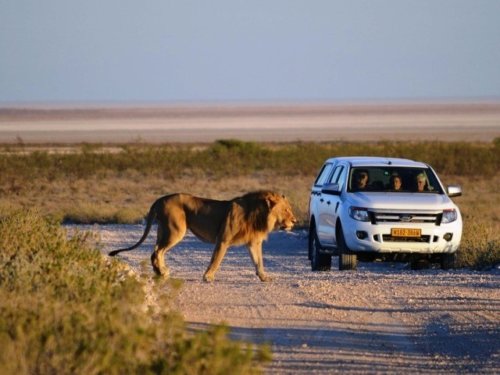 Driving through Etosha Namibian National Wildlife Park, you’re never quite sure what big cat will cross your path, in this case a bold male lion.

The extra expense for a knowledgeable guide will be worth it for their local experience with the places they will show you. Although wild animals are everywhere (I saw my first baboon on the side of the road as we were driving from the airport), a guide will know the most reliable places to spot them. And there are plenty of wild animals to choose from, including the “Big Five.” The Big Five were chosen by game hunters of yesteryear as the most dangerous to hunt on foot – lion, elephant, rhinoceros, leopard,and Cape buffalo. Modern day hunters with cameras have added hippopotamus, cheetah, zebra, and giraffe to make the Big Nine. 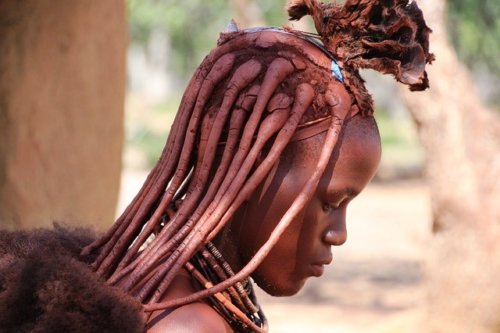 This is a Himba tribal woman covered in a mixture of red ochre clay and butterfat to help preserve her skin and hair.

There are different options for accommodation, although large resort hotels don’t really exist, as most places are small scale and give personal service of varying levels. There are small hotels, bed and breakfast lodges, and Namibia has plenty of places for camping options. You can have a simple tent on the ground, a tent on top of a vehicle, a motor home of some description, stay in camping ground accommodation, and even go the extra mile with “glamping” – glamorous camping, where your tent is well decked out, usually with a spectacular private view.

The climate of Namibia is made for camping for sure. Namibia has pleasant temperatures all year round, although it can be very hot in the desert. There is  more rainfall in the summer months December through February. In winter, it is cool and dry. There are, of course, variations depending on the altitude and the geology, but it’s not a place where you have to pack for four seasons. A sunhat and sunscreen would be useful for sure. In the north of Namibia, there is a low risk of malaria carrying mosquitoes, so it’s always wise to cover up at night, use insect repellent, and wear dark clothing. Mosquitoes prefer blondes.

In the north, you will find the Etosha National Wildlife Park, which is a wonderful reserve full of more than a hundred species of different mammals plus birds, lizards, and reptiles. There I,s however, only one fish, as there are no flowing rivers. A massive salt pan takes up more than a quarter of the park, and it fills with water during the rainy season winter months of June through to September. In summer, it is easier to spot the animals as they have to access the various water holes on a regular basis.  You can stake out a popular waterhole, and watch them rock up in their hundreds, all taking relatively polite turns to drink.

There are also a number of commercial game “farms” that are fully fenced to keep animals enclosed and protect both them and the actual farm animals outside. Large predators are secured inside double fencing, but allowed to run completely free and live naturally making their own food kills. I was lucky enough to horse ride around a game farm (the lions were in another enclosure) looking for rhinos. The rhinos could roam wide distances, so I was not lucky to see any. However, it was a lovely experience and we did see a newly born giraffe alone with his mom. 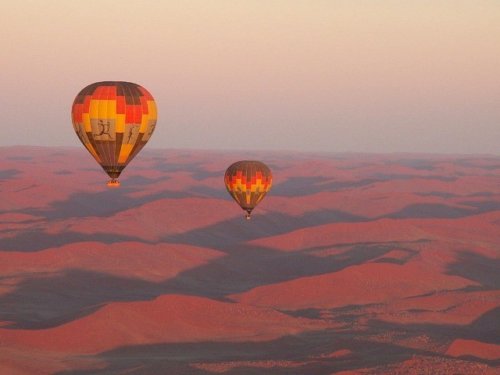 Hot air ballooning is a great way to see the stunning Namibian desert.

Most of Namibia’s reserves have accommodations including camping areas however, you should plan and book ahead for some of the busier times of year, as places are limited. At the Mirabib camping site we stayed in under an amazing rock ledge in the Naukluft National park. Previous archeological exploration had discovered evidence Stone Age people had camped there thousands of years ago. Now that was way cool!  As we drove out in the morning across a flat open desert, we spied puffs of dust being kicked up by an ostrich speeding over the desert. He must have known where he was going.

If you want to find a beach, you will have to head west to where the cool Atlantic ocean pounds sandy and stony shores. The largest town on the coast is Swakopmund at the mouth of the Swakup River. It is a quaint town with lots of century old Germanic colonial style buildings, reminders that Namibia was a German colony up until the First World War. German is still an official language, along with English and a number of tribal languages. From Swakopmund, you can go surfing, surf casting, and make desert or coastal explorations. North is the remote Skeleton coast which is littered with wrecks of ships that met a watery fate on the wild shores. 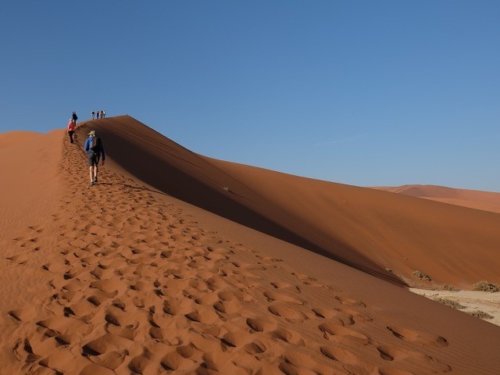 Have fun climbing up some of the world’s tallest dunes in Sossusvlie. Get up early enough to see the sunrise.

You also might choose to make a sky dive from Swakopmund and from the air, you may get a view of the world’s highest sand dunes with their many different sand colors at Sossusvlei. Dune 7, a somewhat uninspiring name, at 1,256 feet is the highest sand dune in the world. There are also others of similar height for you to climb and explore. The reserve gates open just before dawn, so if wish you can drive to the area, race up a dune, and watch the sun rise.

Africa gets under your skin somehow. Regardless of which country you visit, you will find yourself yearning to return, and Namibia is no exception. It is a country full of African wildlife and great holiday adventures, so start planning your Namibian holiday now for the vacation of a lifetime.