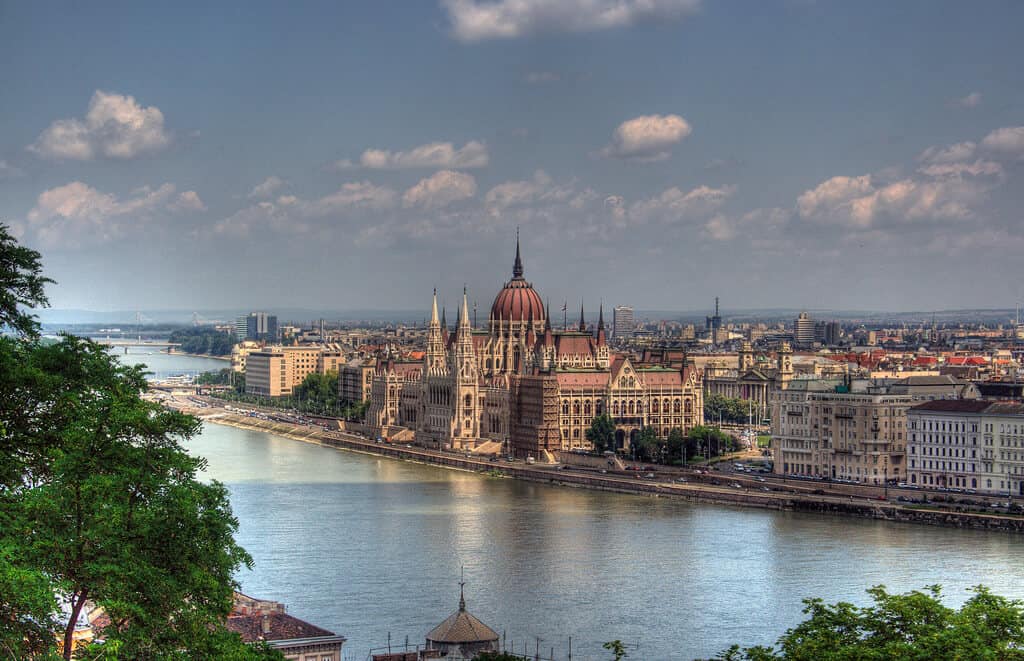 On your family vacation this year, you could either go someplace like Disney World or somewhere like Budapest, Hungary, and considering the magic of Budapest as well as the culture, history, and fun it has to offer, I’d certainly go with Budapest. Whether you’re at the Buda Palace or the Rapunzel-like towers at Fisher’s Bastion or the Chain Bridge over the Danube River, you will feel like you’re in your own Disney princess movie.

The city of Budapest has ample amounts of history and background; from the Huns to the Mongolians to the Ottomans and more, the antiquity of how this city was formed into what it is today is truly fascinating. So many different cultures and worlds collide in this one Eastern European city.

You might be thinking, “Yea, all that history is great, and I do like the idea of my kids getting some culture on their family vacations, but I still want it to be fun.”  That’s just the thing – you won’t even have enough time to enjoy all the city has to offer! You and your family will be easily and constantly entertained. 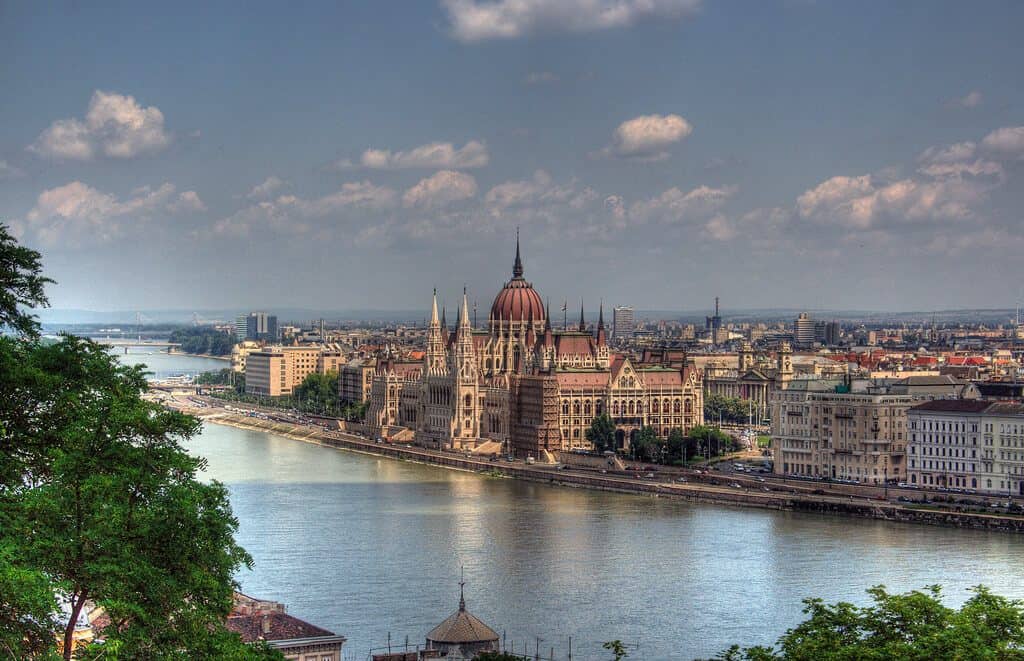 What’s also amazing about this city is that Budapest weather is regularly quite mild, so no matter what time of the year you go, you won’t be sweltering in the heat or freezing in the cold. However, March to May or September through November are the best times to visit Budapest as they’re usually the less touristy seasons. And Budapest is on our list of top safest countries to visit in the world!

Now if you’re thinking, “Where is Budapest?” don’t be embarrassed. Many people don’t know where it is much less think to visit there, unfortunately. Budapest is just about right in the center of Hungary on the northern side of the country. The country itself is located in Eastern Europe and is bordered by Slovakia on the north, Austria and Slovenia on the west, Croatia and Serbia on the south, and Romania and Ukraine on the east.

What’s great about Budapest’s location is that small overnight or day trips to surrounding cities or countries is easily accomplished. Budapest can be a fantastic springboard for seeing other European cities. This is what I love about Europe – they make traveling from one country to another so easy and cheap!

The Vienna to Budapest train is only two hours and thirty minutes while the Budapest to Prague train is six and a half hours – a little longer, but Prague is an absolutely amazing, yet comparatively small city. You can see a lot in just two days there! 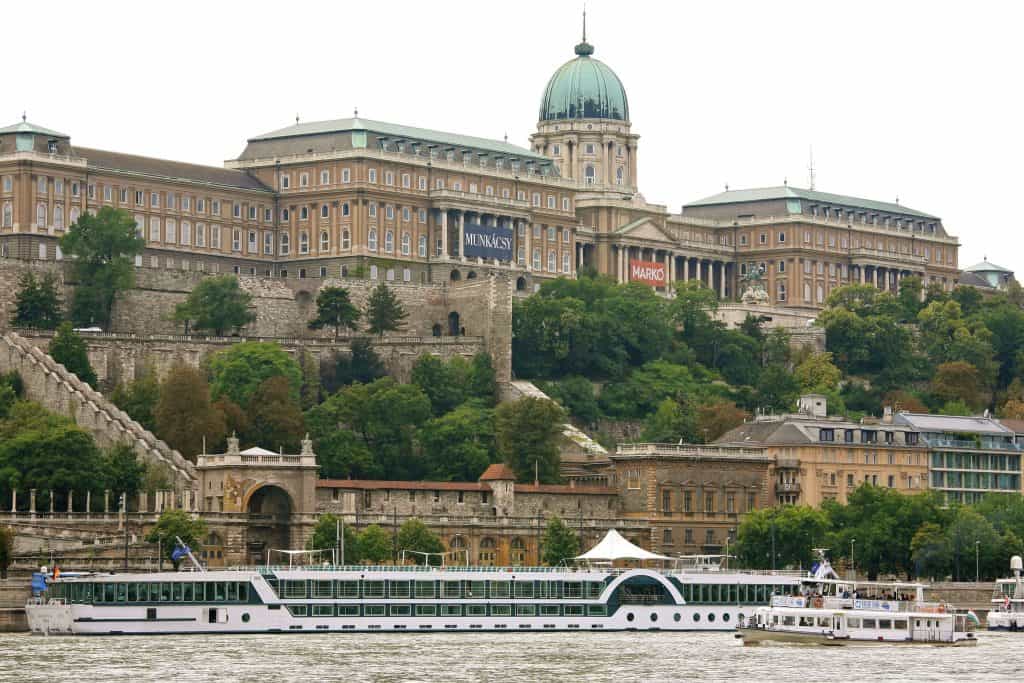 And then there is a plethora of things to do in Budapest. The first priority I’d put on your list is the Buda Palace. Most people don’t know that Buda and Pest are two sides of the city separated by the Danube. Pest is the more modern side with gorgeous parliament buildings, lots of Jewish history, and all of the business buildings. On the Buda side, you’ll find a lot of the wealthier citizens as well as Buda Palace, Fisher’s Bastion, and Matthias Church.

The Buda Palace was first completed in the 1200s and used to be occupied by the royal family. It now houses the history museum and the national gallery. It would take an entire day to tour the whole museum, so don’t feel the need to tour the entire gallery. You’ll learn quite a chunk by just exploring one or two floors or sections.

Another great place to take kids is Miniversum, a series of tiny models of all the famous sights and landmarks in Hungary, Austria, and Germany. All throughout the gigantic building, each series has interactive buttons to make a little person talk or a train move; you could spend hours and hours here; each time you return, you’ll be finding something new – like the dinosaur devouring his prey in one scene.

And at the end of your tour, there’s a kids’ play area where they can tinker and play with their own trains and such! That way, you can take the time to enjoy the interactive displays on your own because, yes, even adults will enjoy this treasure mine. 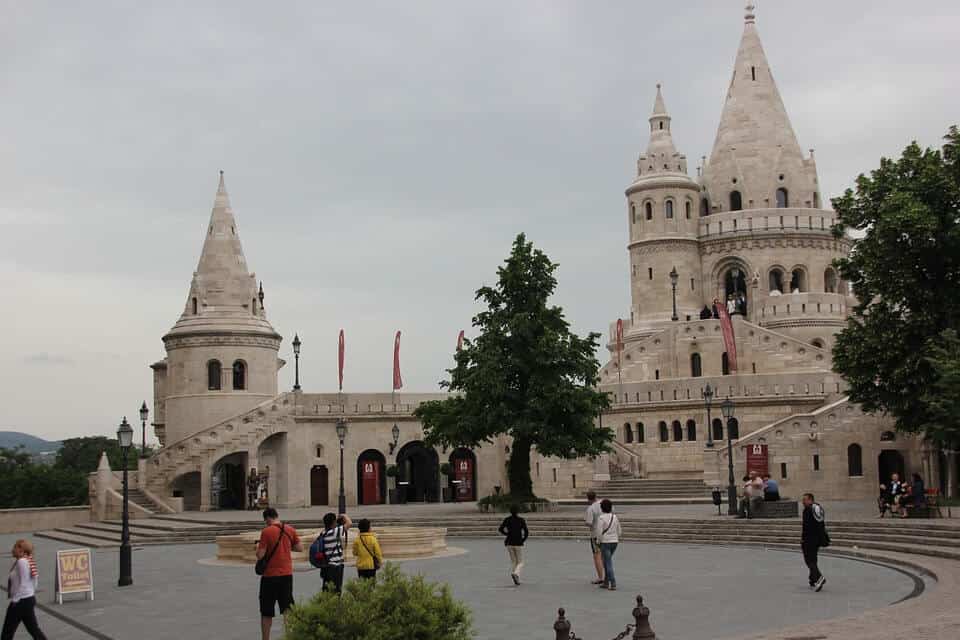 Be sure to make time for Fisher’s Bastion – easily done if you’re at Buda Palace! Just a ten-minute walk up the cobbled street lined with vendors, delicious cafes advertising Budapest’s famous Goulash, and local shops brimming with Hungarian goods, you’ll happen upon some tall, spired towers that look like something out of a fairytale where a princess is forced to wait until her prince comes to save her from the dragon’s lair.

If you’re lucky, Matthias Church which is located right beside Fisher’s Bastion will be open for visitors, but even if you don’t get inside, watching the sun glint off of the tiled roofs and admiring the height of its steeple will be quite satisfying.

One of the things Budapest is most known for is its thermal baths. Now, I have to admit, when I first was offered the option of enjoying a thermal bath in Budapest, I wasn’t so sure.

With hundreds of other people? How do you know it’s clean? And is that even relaxing? Well, I’m here to tell you that it is. Even if you’re a bit skeptical like me, don’t make the mistake of skipping the thermal baths.

One of the biggest ones in all of Europe, the building was built in 1881 and is a gorgeous, clean facility. The baths are clear blue, and your kids will get to splash around and play while you enjoy a relaxing spa experience! 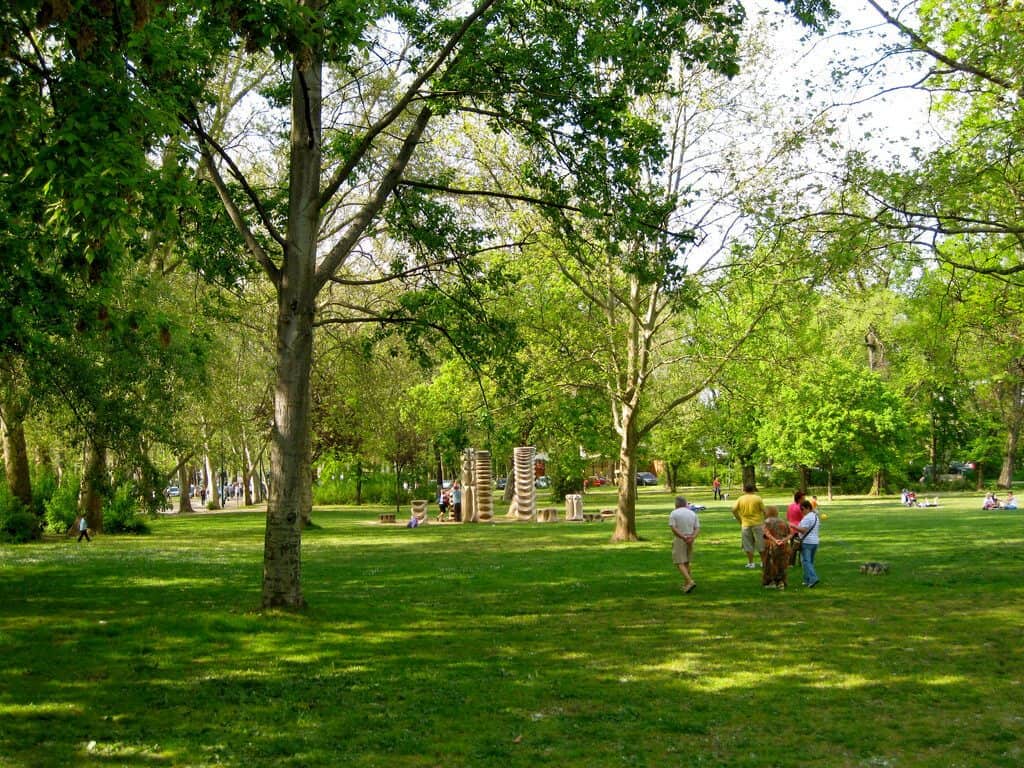 If you just want to get some energy out in the outdoors, Budapest has some great parks and playgrounds. City Park (or Városliget) and Elizabeth Square are both amazing places right in the middle of Budapest to give your kids some outdoor freedom to run and play. Elizabeth Square has a water fountain in which you can dip your feet to cool off, a playground, and even a giant Ferris wheel!

City Park has a huge playground, boating in the summer and ice skating in the winter, and a flea market on weekends. And if you’re there during the holidays, don’t only take advantage of the ice skating at City Park, but also check out the Budapest Christmas Market at Vorosmarty Square; it’s one of the oldest and most well-known, and the square itself is beautiful. Many people head towards Hungary during the holiday season just to tour this famous Christmas market.

Budapest is also rich with Jewish history, some of it quite sobering. If you feel your kids are up to it, take some time to check out all the museums and sights of the Jewish quarter. You can keep it light by just appreciating the history of the area and its old synagogues or dig a little deeper by taking the time to tour one of the many museums.

Also, catching sight of the shoes on the Danube is easy to do as you walk along the river, enjoying the sights of the Buda side. If your kids are walkers, you can even walk all the way from the majestic parliament buildings in Pest past the shoes and to the chain bridge, crossing it to enter Buda. Try to catch the bridge as the sunsets, the city darkens, and the length of the bridge lights up the sky. 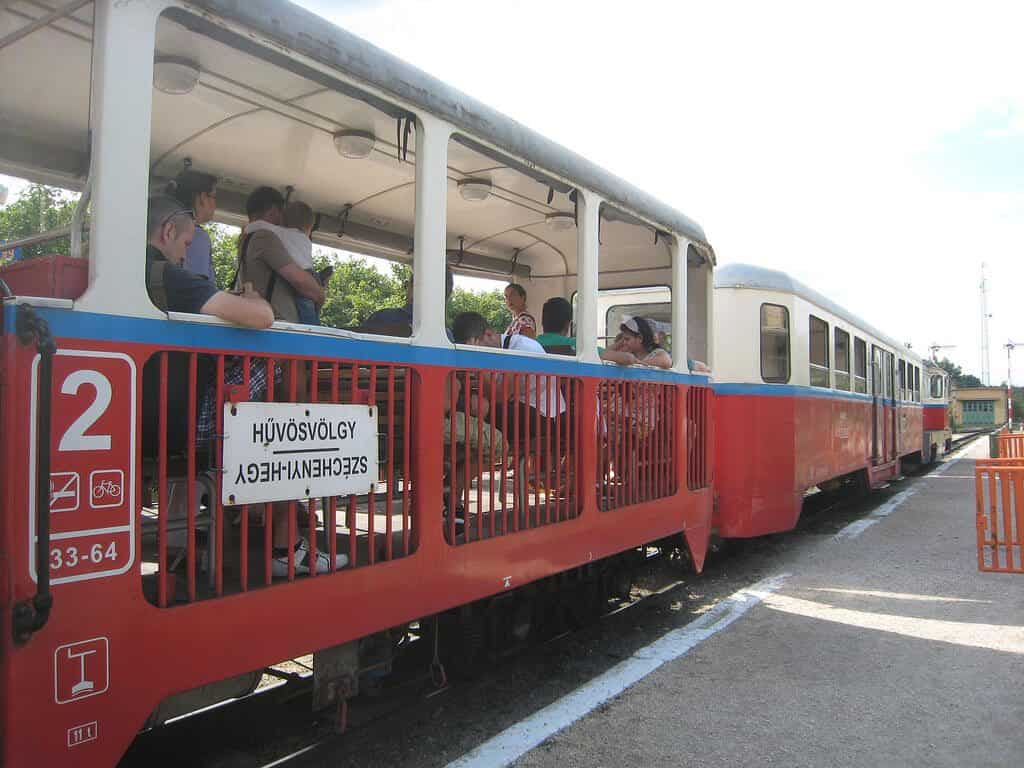 Something else your kids will probably love is the Children’s Railway which takes you on a ten- to fifteen-minute ride through the woods of the Buda side. Besides the fun of riding an open train through Budapest, what makes this railway unique is that its run by responsible kids from ten to fourteen years of age!

Budapest allows kids of a certain age that make and maintain a particular grade average, showing their responsibility, to work on the Children’s Railway.

Budapest is a relatively safe city, and, compared to places like London or Paris, it’s not overwhelmingly huge. In fact, I walked almost the entire time I was there. However, the city is still quite large, and you don’t want to be too far away from the center of it all.

What a waste of a family vacation to spend the majority of each day on public transport, though Budapest’s is known to be good. I found that there were more affordable prices on the Pest side of the city. The confusing thing about Budapest, however, is that it’s more of a spiderweb than a grid.

You’ll notice several ring roads on the Pest city center, so, best case scenario, you’ll want to try to find somewhere to stay within the two first rings. If you’re wanting somewhere quiet and a bit more romantic or family-friendly, however, you’ll want to look at the castle district within Buda.