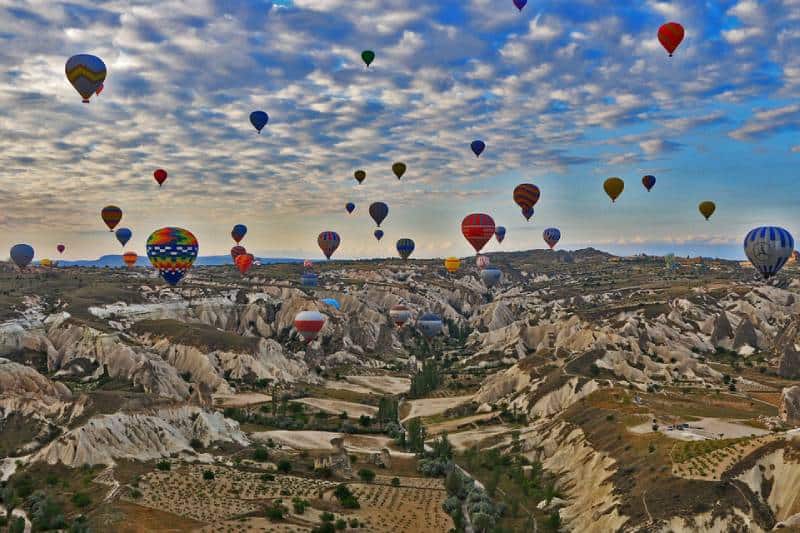 Cappadocia a quite the magical destination, which is why you must visit with your family.  This part of the world looks as if it has been transported from a fairy tale with its picturesque landscapes, unique churches, and cave hotels.  Add in a few hiking adventures that will add to your list of to-do’s while you’re in Cappadocia and you’ll make memories that will last a lifetime.

Cappadocia, Turkey can be found in the center of Turkey, directly in the middle of five provinces – Niğde, Nevsehir, Aksaray, Kayseri, and Kirsehir.

How to Get to Cappadocia?

When it comes to how to get to Cappadocia, the answer is dependent on where you are arriving there from.  Flights to Cappadocia can be taken from Istanbul, Selcuk, and Pamukkale, as well as a few other areas of the world.  Of course, you can also start your journey from anywhere and simply fly into one of these destinations before continuing on your way to Cappadocia, Turkey.

The Istanbul to Cappadocia flight takes a little over an hour and you can land in either of the two Cappadocia airports – Nevsehir Kapadokya and Kayseri Erkilet – and both are close to your destination of choice.

You can also take a bus from Istanbul to Cappadocia, but it takes approximately ten hours to make the trip, and it is mostly done at night.  This is the cheapest option though, so if you are looking to save some money, this may be the best way for you to get to your destination.  But if you’re short on time and don’t want to spend too long on the bus, then consider taking the train or flying into Cappadocia.

Where to Stay in Cappadocia

There are plenty of hotels in Cappadocia, but since Cappadocia is a region, you must determine which one of the towns you want to stay in for your visit.  Uchisar is the best area in Cappadocia for families, because it is less touristy than many other areas. Another option is Göreme, which is perfect for those who have never visited Cappadocia before.  This part of Cappadocia is very walkable, even for small children.

Now, this is not to say that the other areas of Cappadocia Turkey are off limits to you.  You may find exactly what you are looking for in those parts of the region. However, you may want to begin your search with these two destinations when looking for a hotel in Cappadocia.  And it gets more exciting because a good number of hotels here are cave hotels.  This means that you can stay in a Cappadocia cave suite or Cappadocia cave room and experience something else unique on your family vacation.

The weather in Cappadocia can be slightly unpredictable so you may want to be prepared for almost anything during your visit.  First off, Cappadocia weather has four seasons, like so many other parts of the world. We’ll explore each season, so you know what you can expect at any time of the year.

The winter months of November, December, January and February bring snow and colder weather, while the days get warmer as spring arrives in the months of March, April and May, pretty much as you’d expect.  The nights are still cool during the spring months though and you should expect quite a bit of rain at this time as well.  The summer months of May, June, July, and August bring the heat, especially during the month of July and the beginning of August when there is very little or no rain.  The fall months of September and October bring cooler temperatures once again and then we’re back to winter months. So when is the best time to visit Cappadocia?  You can visit Cappadocia any time of the year though most people prefer to visit during the Spring, Summer, or Fall months.

Things to do in Cappadocia with Your Family

There are so many things to do in Cappadocia with your family, but one of the first things you must do is learn how to pronounce Cappadocia.  Cappadocia phonetically sounds like kapəˈdōSHə and it sounds like “Kappa-d0-kia” or “Kappa-do-cia” when you listen hard to locals say it. If in doubt, once you arrive in Turkey or Cappadocia, ask a local to pronounce it for you and you’ll get it! Once you have learned how to say “Cappadocia”, you will be more than ready to go out exploring this amazing part of Turkey with your family.

So what can you do in Cappadocia? These are our top 6 recommendation of what to do when you’re in this part of the world:

2) Take a Ride in a Cappadocia Turkey Hot-Air Balloon

The Cappadocia hot air balloons are one of the best ways to see the spectacular landscape of the entire area.  There are numerous hot-air balloon tour options available, which means that you can choose the one that fits your needs the most.  Most tour companies market their tours as standard, deluxe, and private.

A standard flight will have you up in the air for an hour with between sixteen and twenty-four other people.  Once you have seen the sights from above, you can enjoy a buffet breakfast with most tour companies before continuing on with your day.

The deluxe flight will have you in the air for a half hour longer and there will be fewer people on board.  This ensures that you can see more of Cappadocia and have less obstruction of those views. You will still have the buffet breakfast at the end, so you won’t need to continue your day hungry.

A private flight is best if you do not want to share your Cappadocia hot-air balloon experience with strangers.  You can tailor this hot-air balloon ride according to your needs and be in the air for up to two hours.

If you love hot air balloons, you may want to time your visit to coincide with the Cappadocia Balloon Festival.  This event is normally held during the month of July and there are usually at least one hundred balloons flying every single day.

The next Cappadocia Balloon Festival is scheduled as seven days of events, so it is going to be bigger and better than previous years. Perhaps this will be a good year to visit Turkey?

4) Take One of the Cappadocia Day Tours

There are so many Cappadocia day tours to choose from and while you plan to do only one, we guarantee that at least a couple more fun tours will end up on your itinerary!  Some of these tours are only a half day, while others take a full day or more to complete. We recommend an ATV Tour to start, perhaps a sunset tour. Or if you’re adventurous, take a three- or four-day tour that will show you other parts of the area if you want something truly different.  Whatever you do, the kids won’t have enough time to get bored in Cappadocia. We promise!

Some family members can be quite picky when it comes to foods, but when you are visiting Cappadocia, you must all try the Cappadocia Turkish cuisine!  While everyone won’t love it all, it is practically guaranteed that every member of your family will fall in love with at least one of the items they eat.

So, let the kids try out some new food, they might actually find a favorite!

A Few of the Best Cappadocia Turkish Cuisine Foods You Must Try:

Pide – Pide is basic flat bread that has nothing on it, and it is best eaten warm.

Testi Kebab – This is quite the touristy food in this part of Turkey, and you will only find it served at some restaurants.  The stew is cooked in a ceramic pot which is placed on the table and served with rice.

Pasa Bonfile Sarma – This is grilled steak that is then rolled and stuffed with pine nuts and cheese.

Kiremet Chicken or Beef – This is a mixture of meat with tomatoes, onions, peppers, garlic, and multiple spices before being baked in a shallow dish.

It’s normal to worry about safety in Cappadocia and Turkey in general, especially if you plan on doing so many activities that will take you away from the comfort of your hotel, resort, or accommodation. Cappadocia is safe for the most part, but you still have to travel smartly like you do in other parts of the world. Don’t over-expose your valuables, don’t be too loud or offensive, try to respect customs and traditions of people around you, and be aware of petty crimes like pickpockets and other typical tourist crimes.

So, is Cappadocia on your bucket list? You may want to push this destination up to the top of your list, because while Cappadocia is not going anywhere, anytime soon, the memories you make there will have you wondering why you didn’t visit sooner!